Deer season has been pretty slow for me outside of the whitetail cull hunt but to be fair I haven’t spent as much time in the woods as I normally do. The weather has been very very warm and I’ve been having good luck on the water so most available days have been spent fishing.

Christmas week was calling for a very cold northern to blow in bringing temps down into the teens so Mary Ann decided to get in one last fishing trip before “winter”. She doesnt do cold well at all so we thought this may be our last one of the year.

Having had pretty good luck with the striper in the river we decided to make that our last run. The cold front was scheduled to be there in the afternoon that day and overnight temps would dip down into the teens and single digits in some places. I love fishing but those temps would call for me to be in a deer stand.

Since it was Christmas week I thought I would try to get into the spirit and wore my Santa Claus suit to the river for a little fun.

After catching some live bait we put on our waders and made our way out to the river.

Mary Ann likes to throw lures so she did her usual of walking around and catching some sand bass and crappie while I waited out the big fish.

My rig was simple, a big blue gill on a 4/0 hook and a weighted slip bobber set at about three feet. Throw it as far as you can and let the river bring it back to you.

It didn’t take long to get some action but I missed the first bite. Second one came off, I’m not on my A game today, luckily they gave me another chance and I was into one. It had to be quite a sight for the people around watching Santa Claus fight a striper in waste deep water. Mary Ann ran the video and I finally landed the fish, a nice fish about 7 pounds or so. 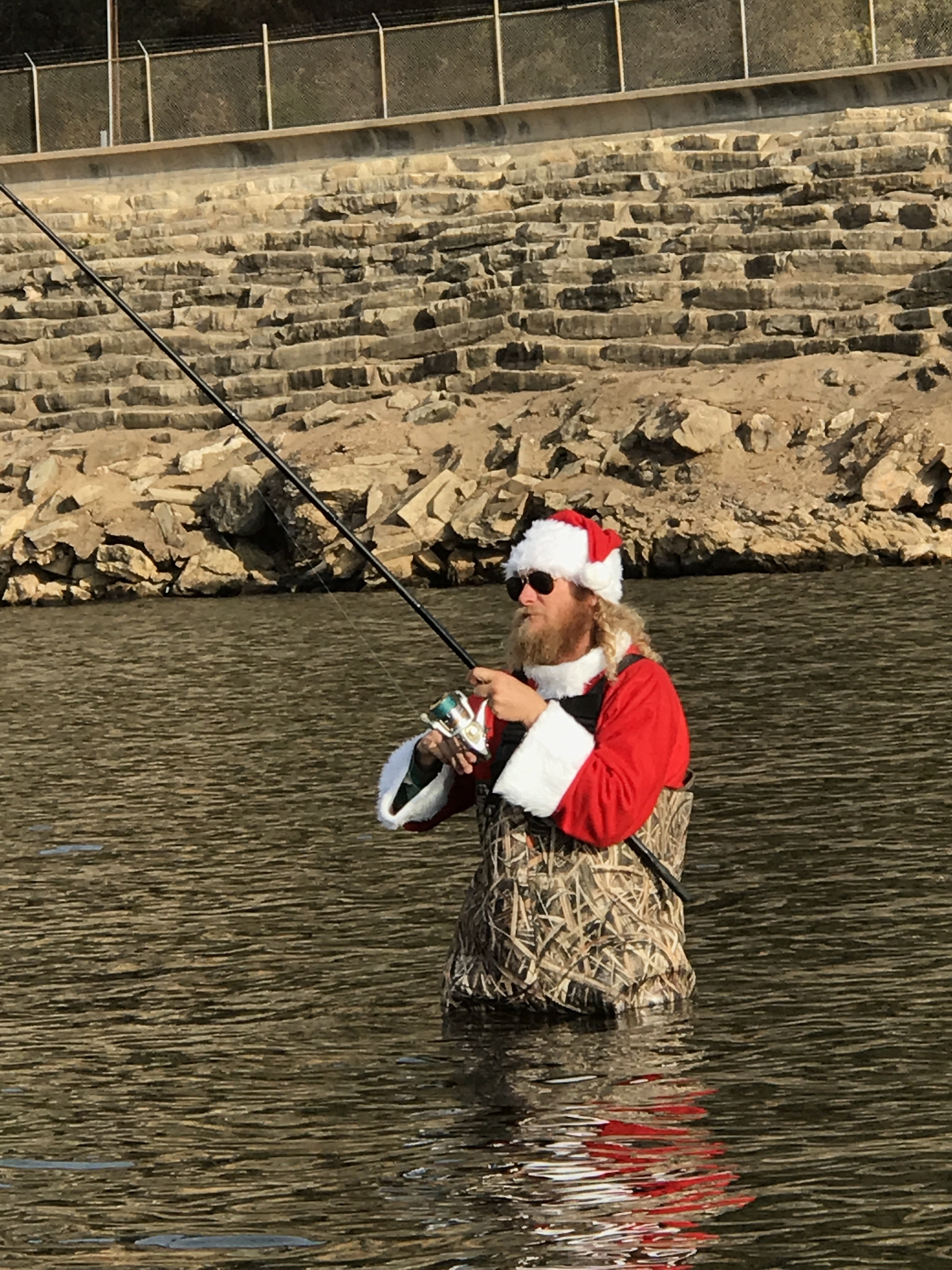 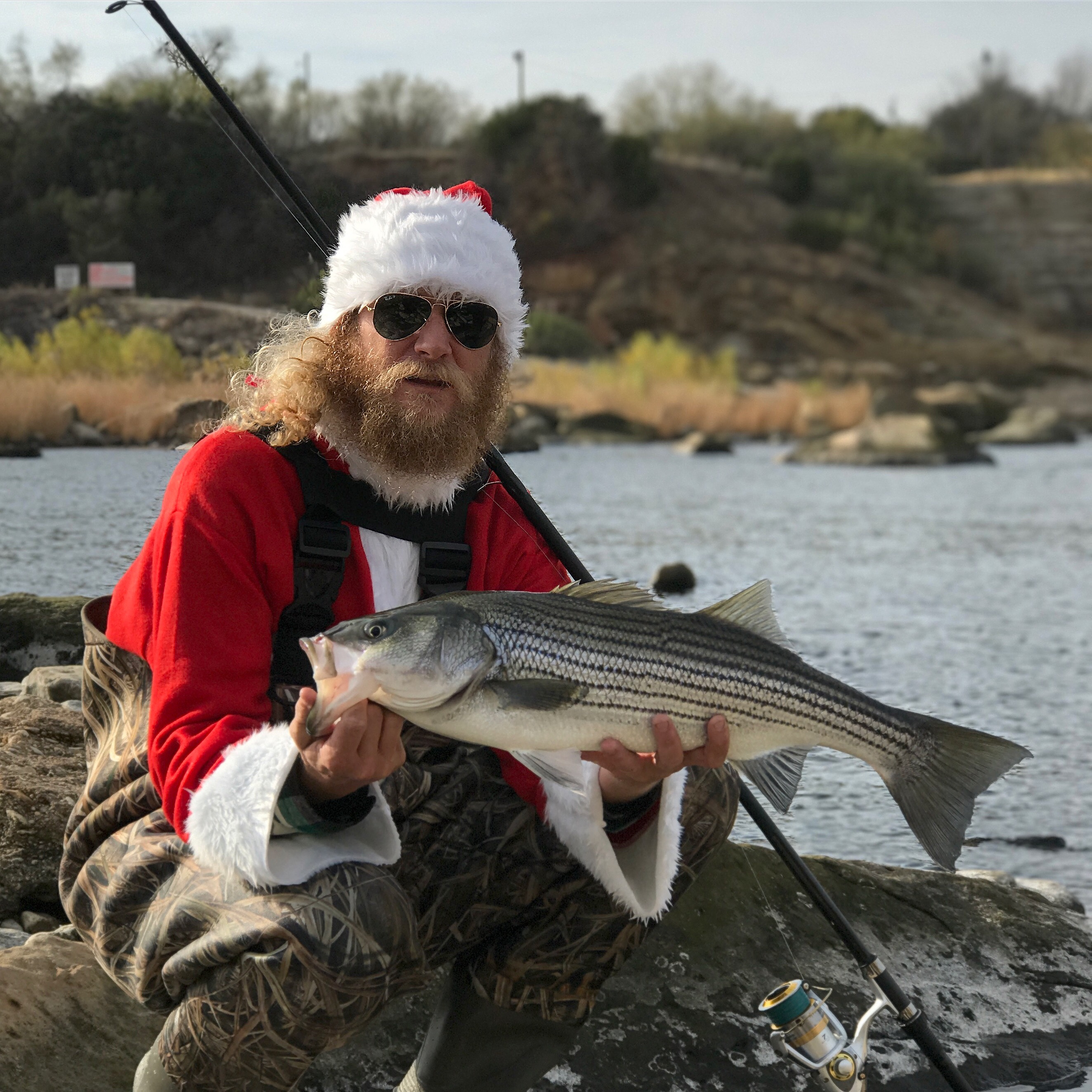 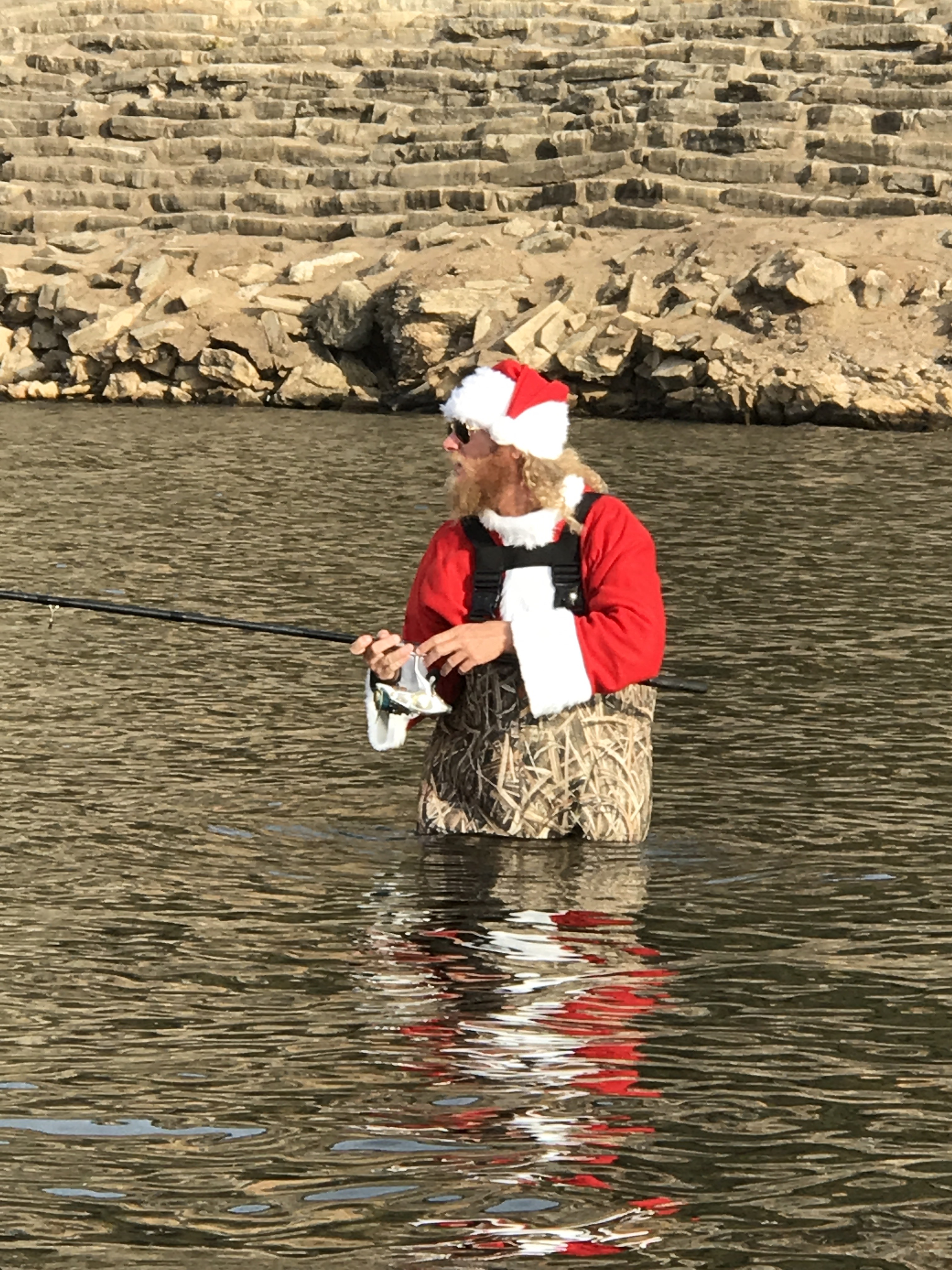 After a few fish the wind picked up and made it near impossible to cast a big bait and on top of that the tempature dropped about 20 degrees in an hour. The weatherman had missed the time of the front by six hours but not the tempature. When we arrived it was 64 degrees but before we got back to the truck two hours later  it was 43 and windy so I didn’t mind leaving at all.

The weather stayed cold for a few days but going into Christmas Day it was back to 70 so we were back at the river the day after Christmas.

We caught our bait and headed to the spot with almost perfect conditions so I had high hopes but six hours in I had used all the perch and had no fish to show for it and Mary Ann had only managed to trick a couple small striper and sandbass into biting.

I met a couple very nice men fishing there with big top water baits and they were very interested in my rig and how I was getting live bait that far out so I showed them the set up and we talked fishing for awhile. One of the men Tom asked if I thought live shad would work and I said absolutely but getting those would be difficult, he said he had a net and would try it. I honestly had lost interest and was messing around with my fly rod trying to intice a carp into taking a fly but my fly fishing skills leave much to be desired and that went about as well as the rest of the day had. I did catch one small buffalo so all was not lost. I happened to glance up while fighting him and seen that Tom had a good fish so I assumed he found some bait.

We had spent most of the day there and I was getting tired and hungry so I told Mary Ann let’s go, and as we were making our way across the river Tom hooked up again. Six hours with no striper and now two in fifteen minutes, he was onto something.

We went over to talk to them and he said he caught eight big gizzard shad but couldn’t cast them so he free lined one out letting it swim where it wanted and he got a pick up. They asked if I wanted a bait and I told them no but I could tell by the look on Mary Ann’s face that was the wrong answer so I took them up on the offer.

You can’t get more simple than hook and line, no weight, no swivel, no bobber, just a hook on the end of the line and a 9-10 inch live shad. Between the four of us we started a feeding frenzy I guess as striper were hitting baits as close as a few feet before they could swim away. Baits were being knocked back up in the air before they hit the water. It was some of the most insane fishing I think I’ve ever seen.

These aren’t small fish either, weighing between 6 and 18 pounds the fights were great but the commotion was drawing a crowd of people.

Our first bait out Mary Ann hooked a real nice 9 or 10 pounder and did a good job fighting it then I caught one about the same size. Meanwhile Tom and Hu were also getting fish on about every offering. Between the fishing and the people coming over asking questions and wanting to see the fish it was pretty chaotic.

These baits were huge and the fish had a hard time getting them down sometimes and it made for a great show. I think they would hit them into the air trying to stun them or kill them so that they could get a better position to swallow it. Even though they were big fish they couldn’t swallow these shad any other way but head first.

Look at it like this. You just had Thanksgiving dinner and you are laid out on the couch. Your wife comes by with a tray of vegetables and ranch dressing for dipping and you usually would have a few but you are full and decline her offer. Minutes later she comes by with a steaming plate of chocolate chip cookies right out of the oven, guess what, you may be full but you ain’t turning down a cookie. I think of fish the same way, they may not be feeding actively but if they are there you can get a bite on something so don’t give up on them. Keep changing baits and retrieves and depths, whatever you can because eventually you will find their chocolate chip cookie and get a bite.

I rarely keep fish but Tom and Hu wanted to keep some so they both had their limits in a couple hours and I started giving mine to other people. 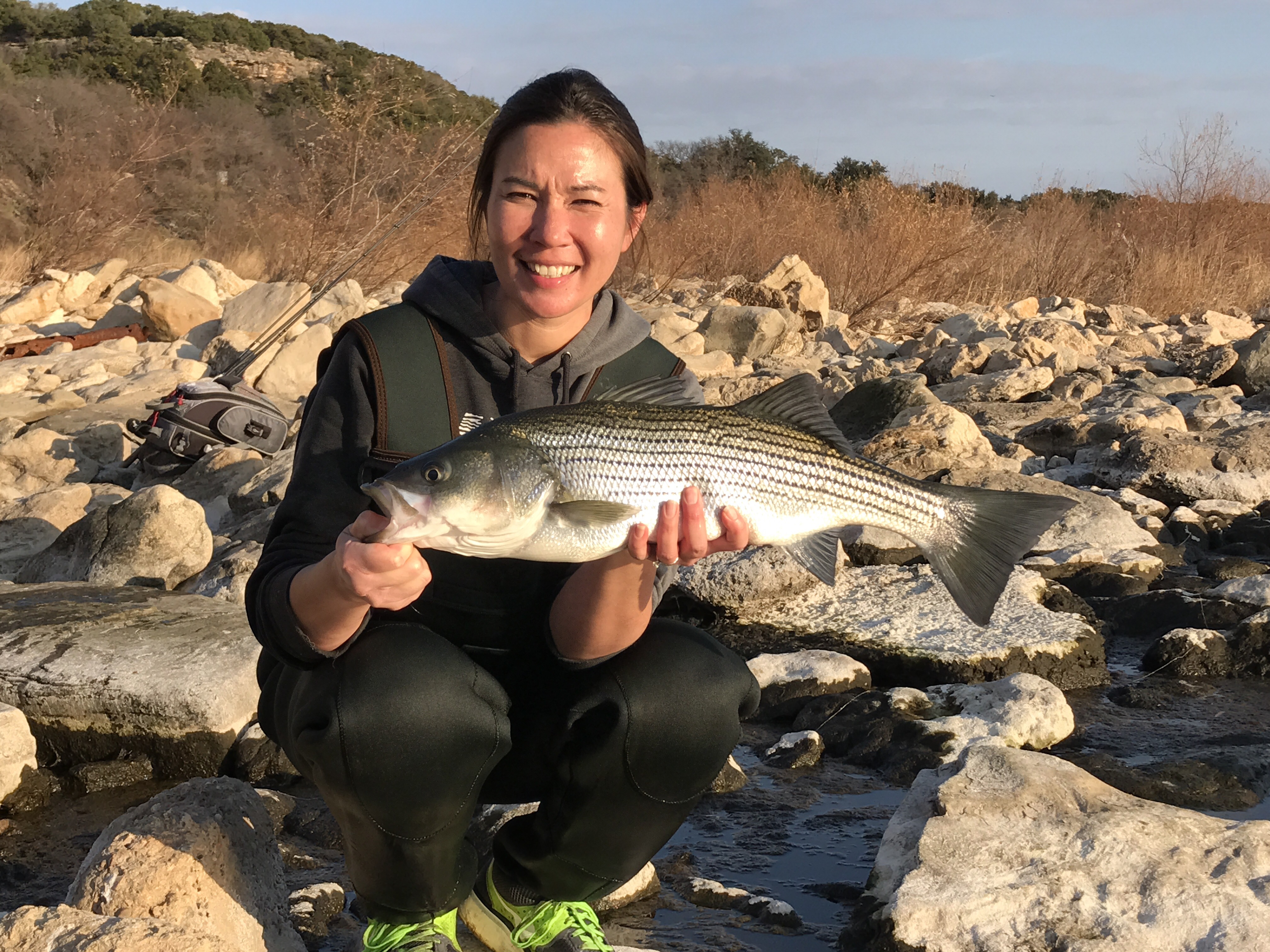 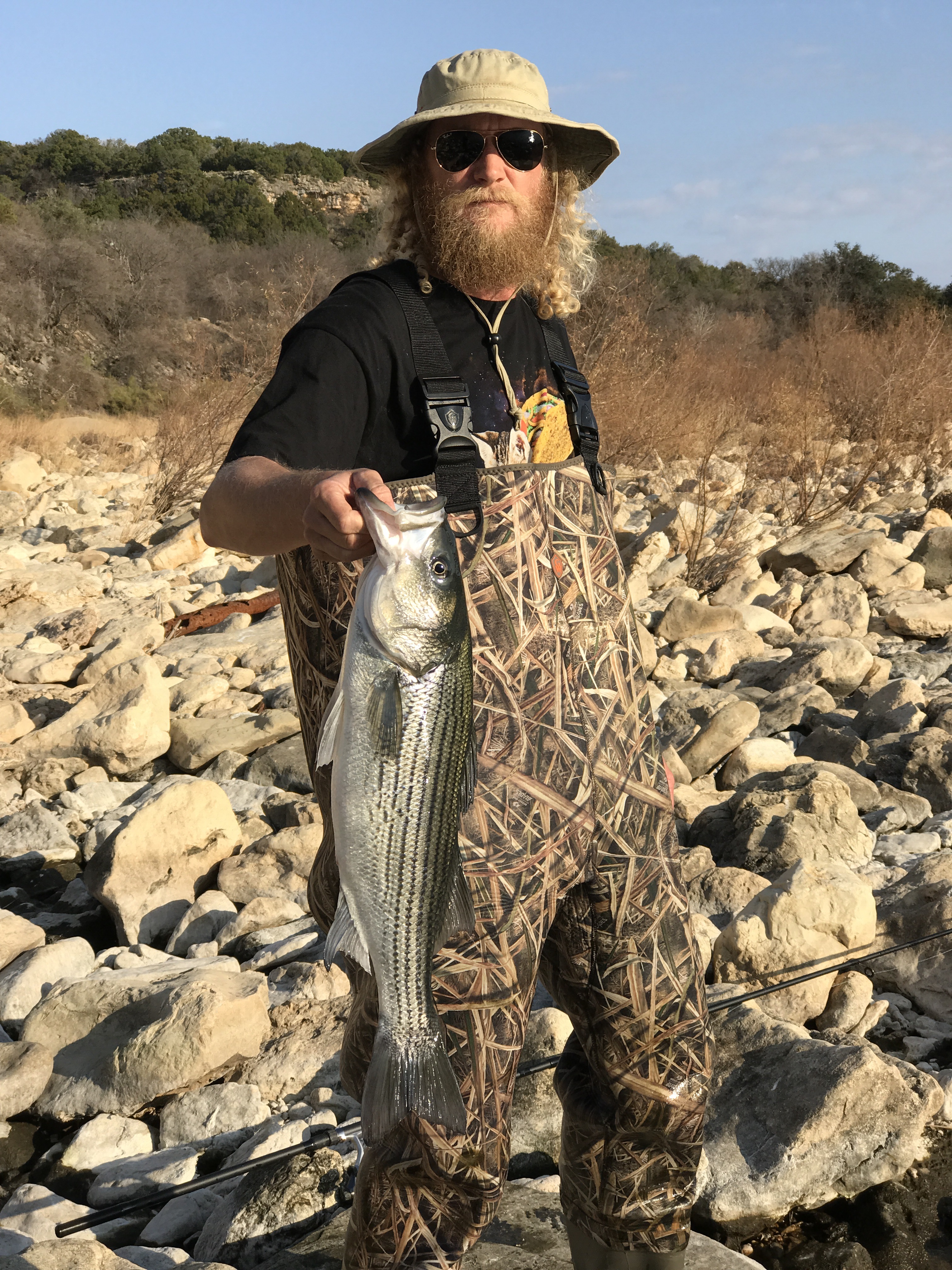 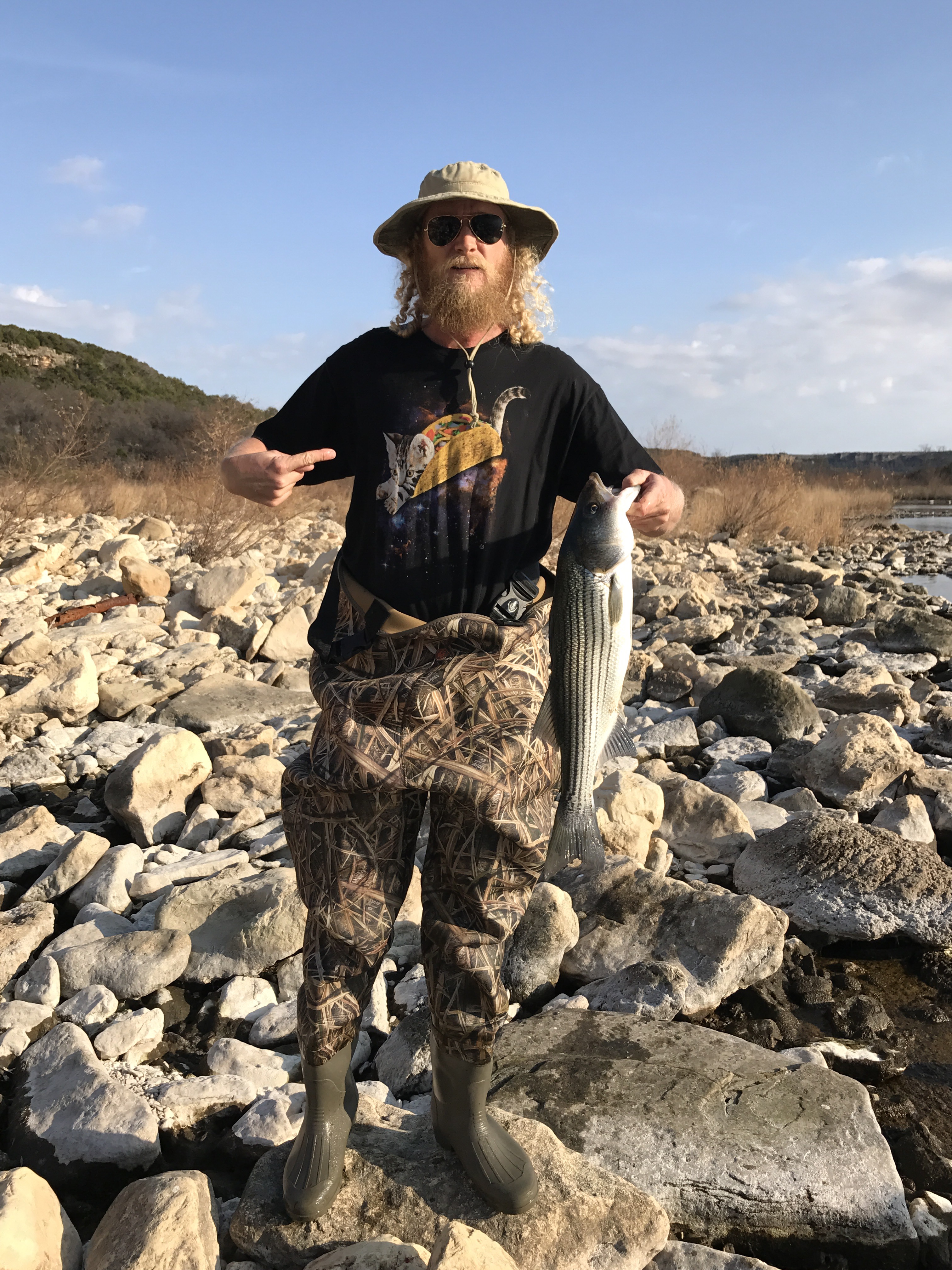 The men had forgotten their stringer so we were just piling them up in a rock livewell Tom made. I’m not sure how many pounds of fish there was total but two limits and the few I gave to another man had to add up to 150 pounds I’d guess.

Catching is always fun but you get caught up in the moment and forget that you have to carry all those fish out along with all the gear you brought down. 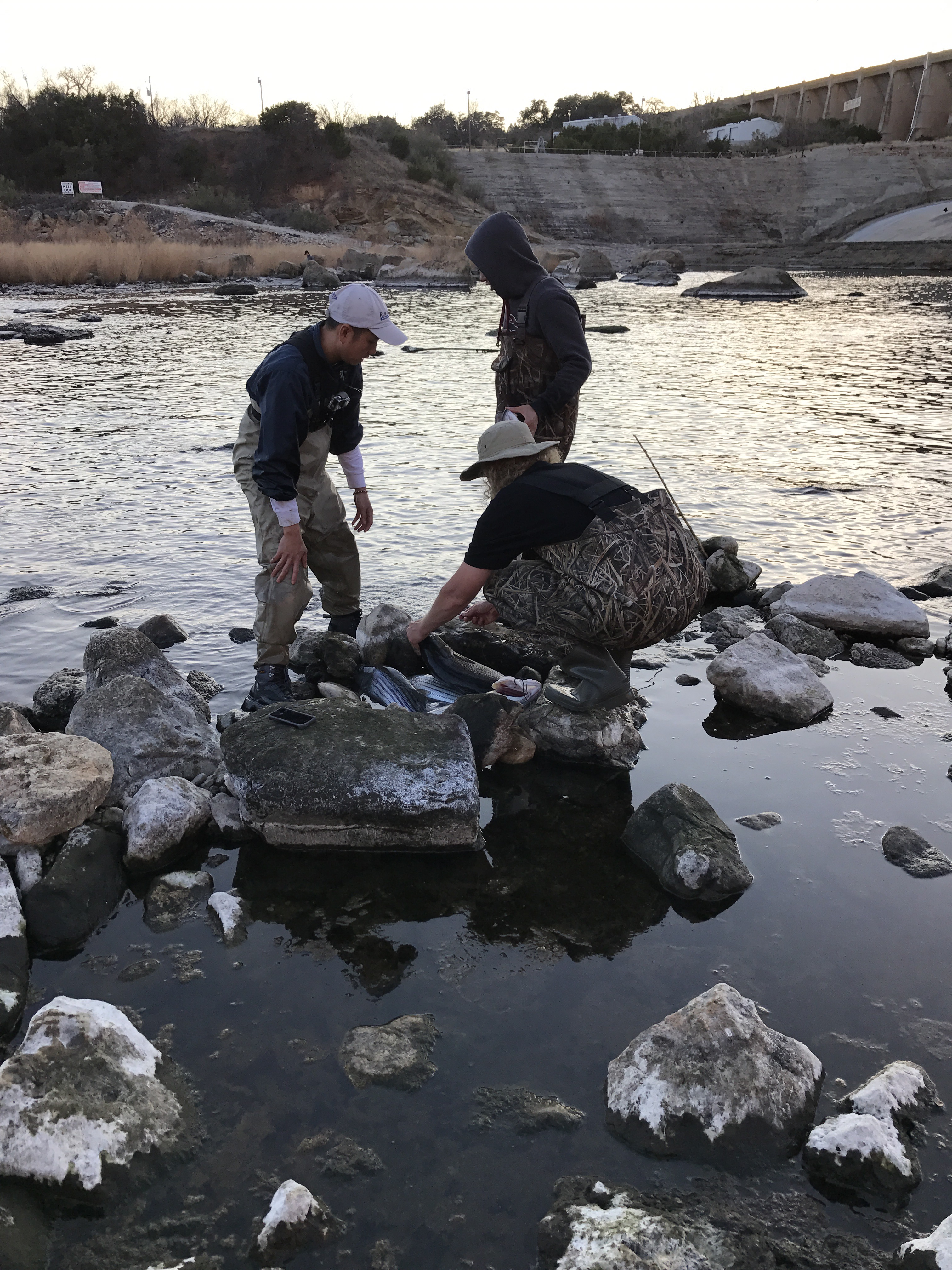 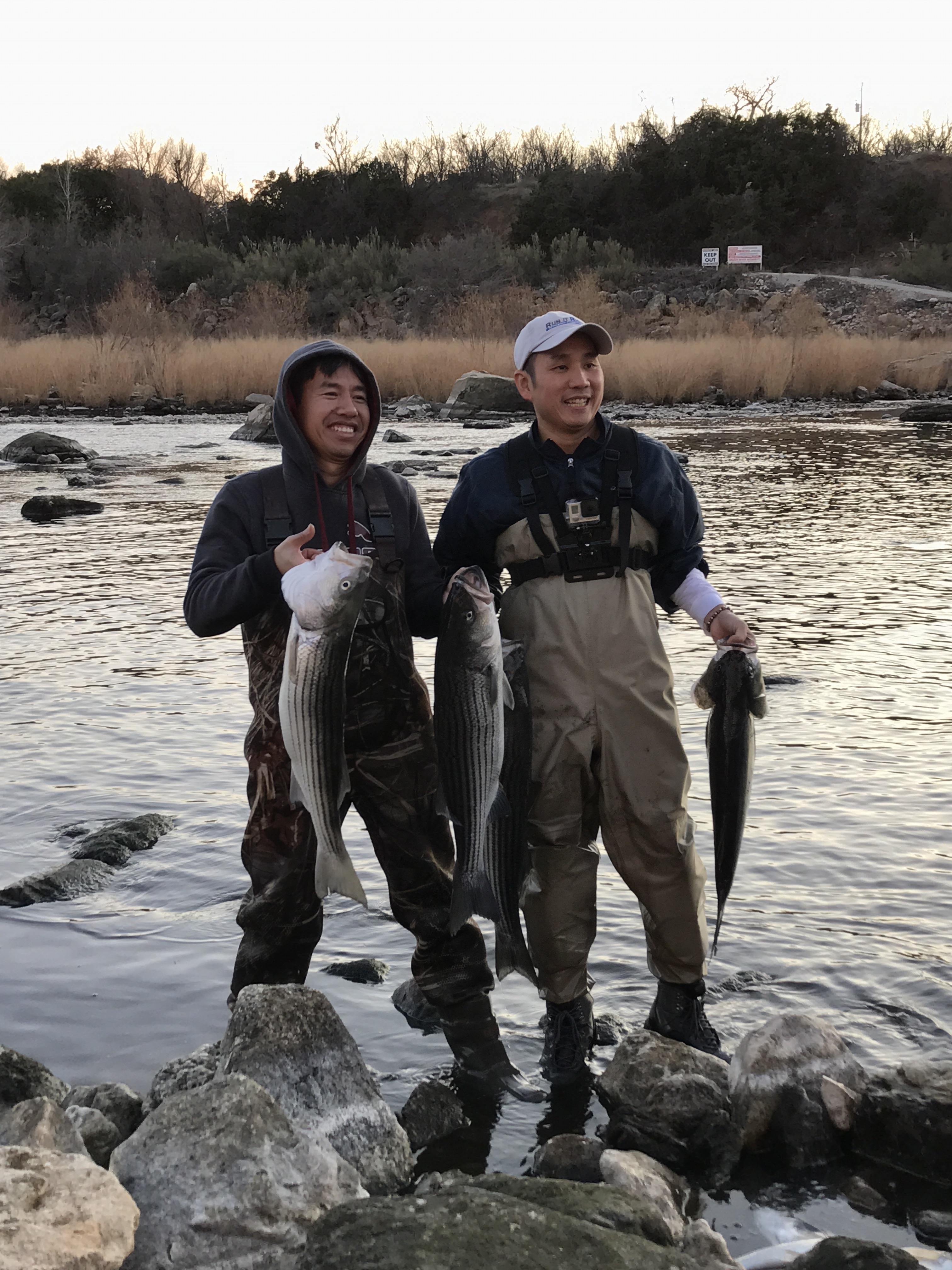 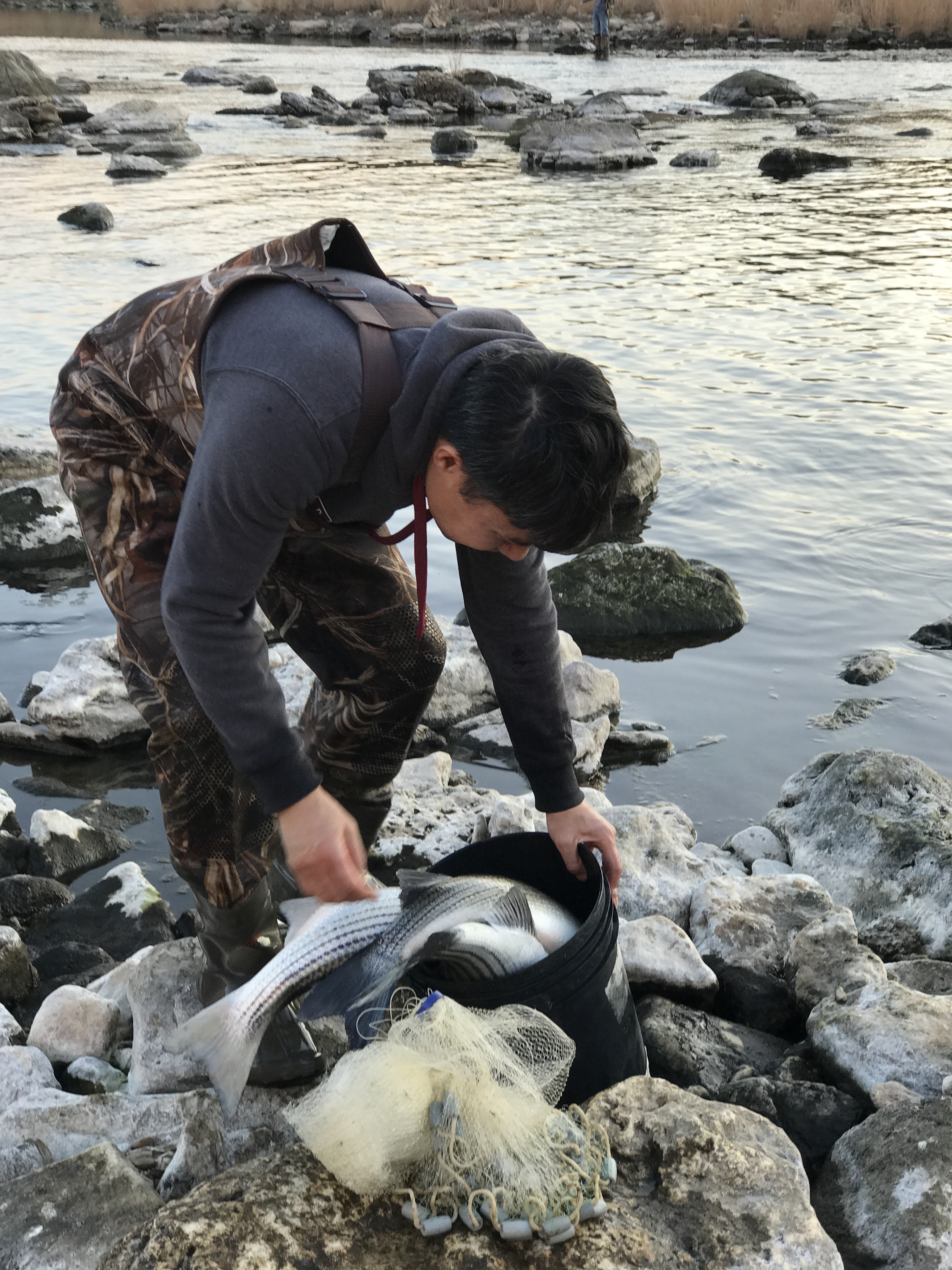 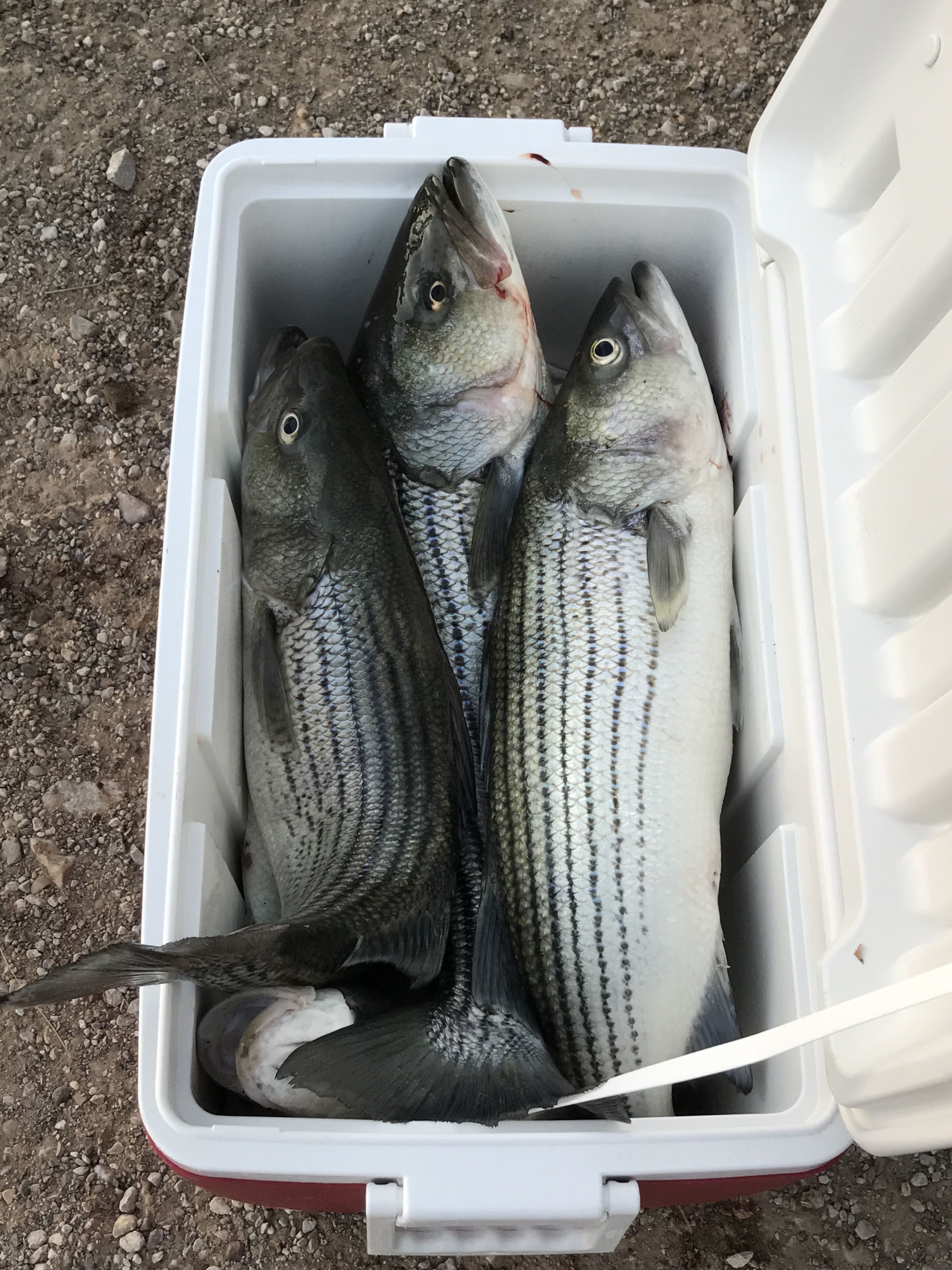 Dark was approaching fast so having their limits Tom and Hu decided they had enough and I told them I’d help them carry their gear up the hill because they had a load of fish. It’s a good thing there were four of us because it took all we had to get all our gear and that load of fish the 200 yard walk up the bank to the car. 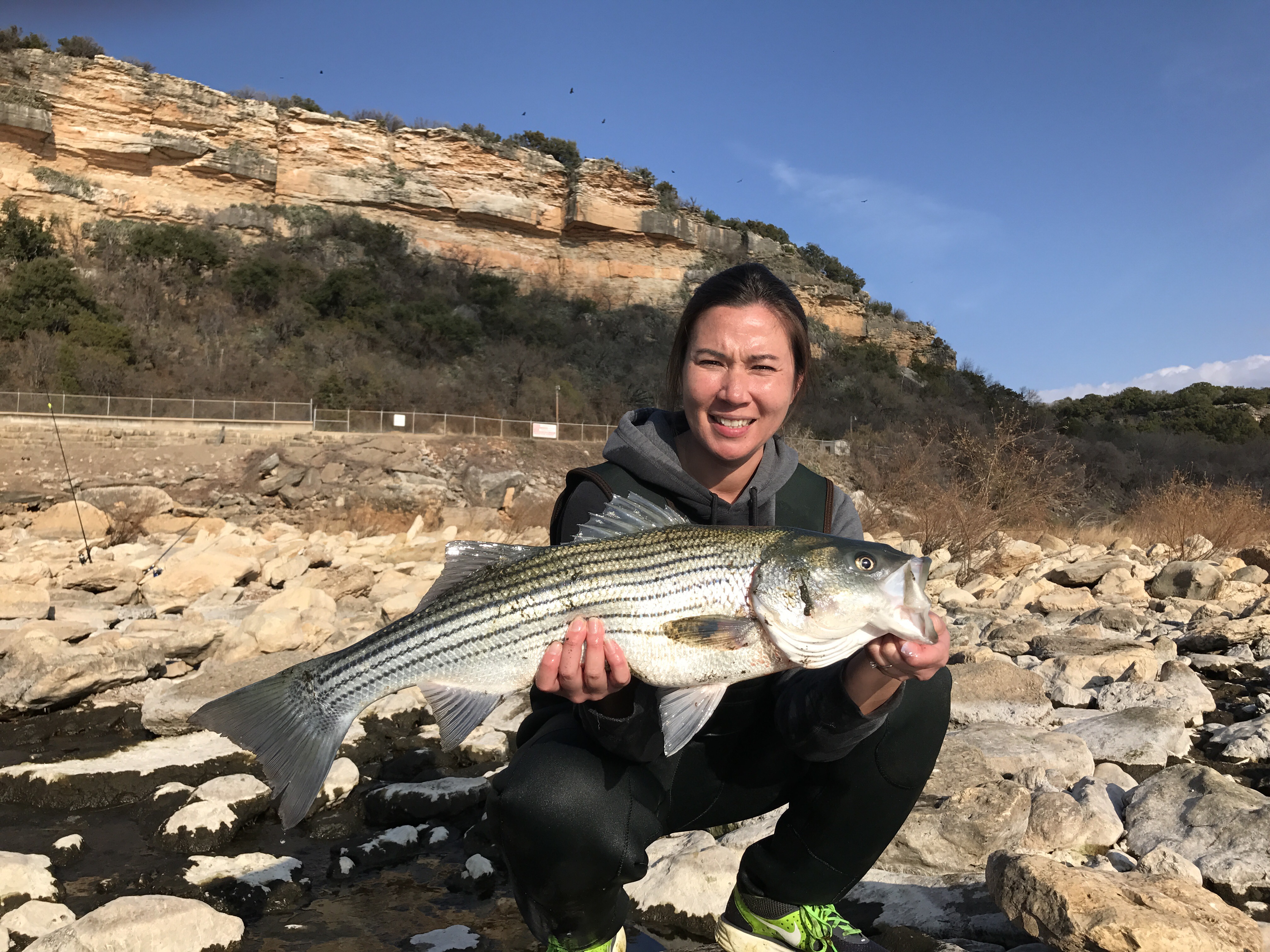 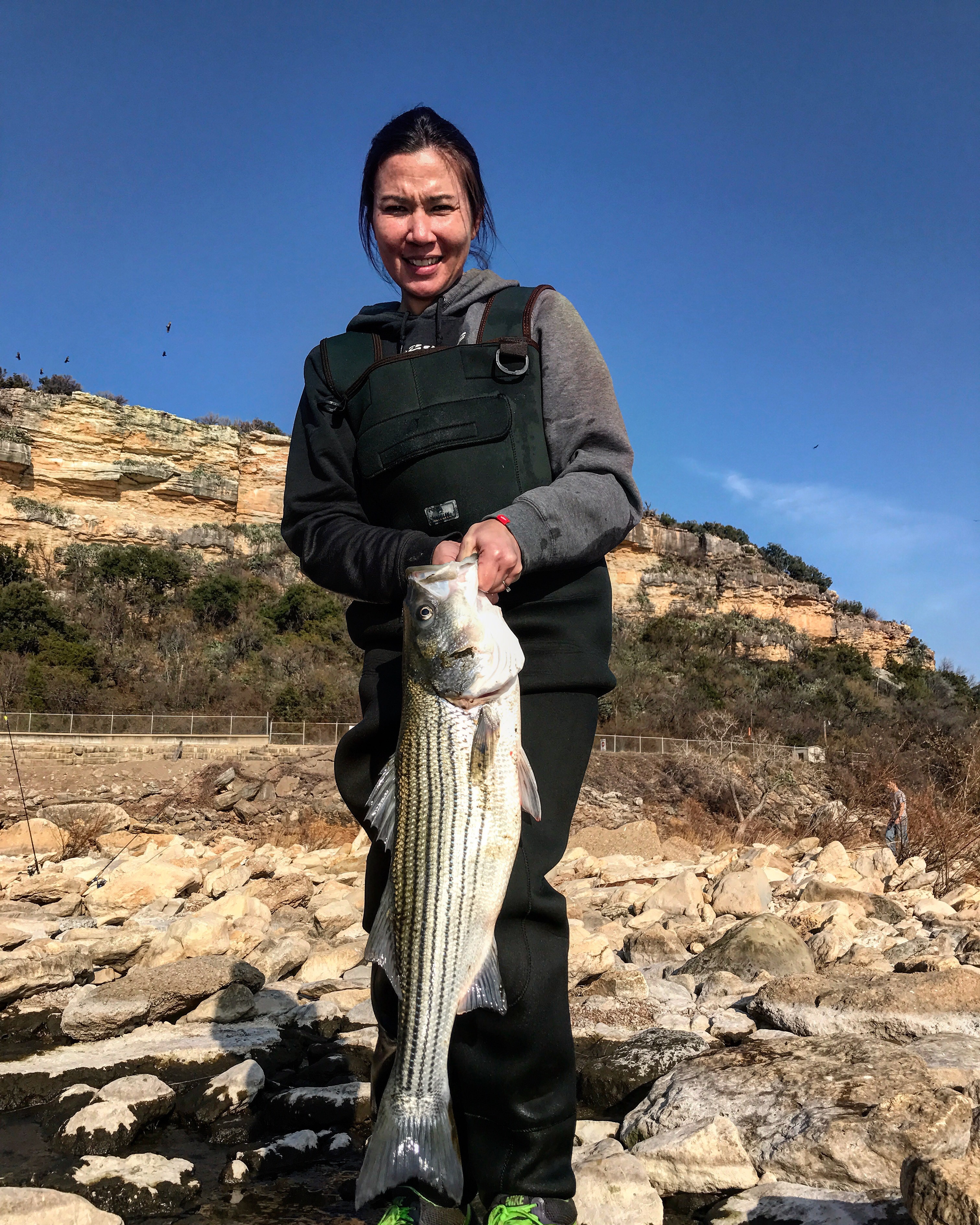 I exchanged information with the guys and we loaded up their car with all the fish and their gear. Mary Ann was cold so we said good bye and I pointed the big Dodge toward The Cafe. Yes The Cafe, not just a cafe but The Cafe in Graford. Great name huh? That’s all of it, just The Cafe.

I’ve eaten almost everything on their menu and have yet to have anything that wasn’t excellent.

We stayed simple this time with sandwiches and burgers but they have great chicken fried steaks, chicken liver, just about anything. It’s a very good place to stop with very good food. 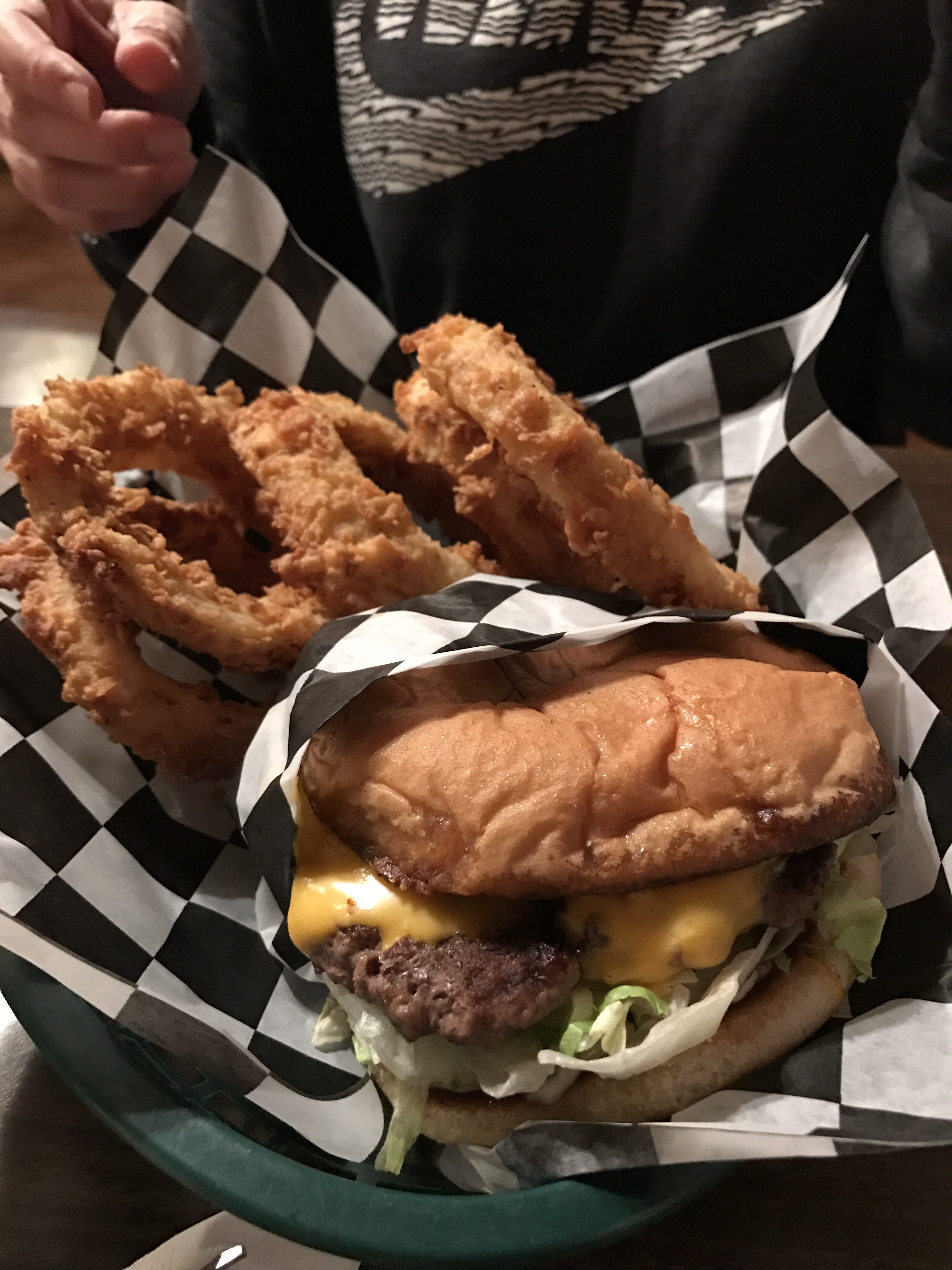 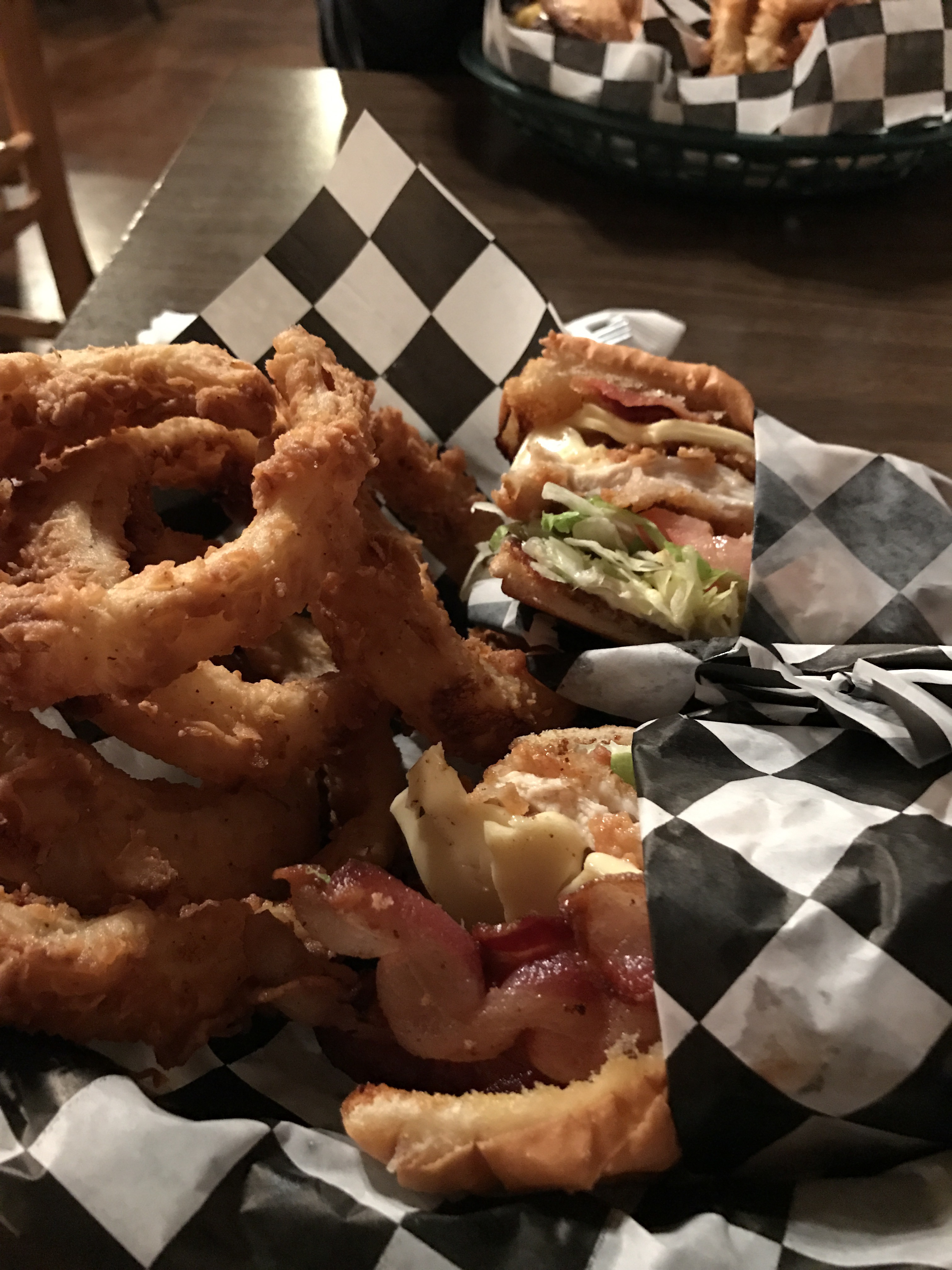 Mary Ann had ice cream and she fell asleep on the way home but I had to drive which doesn’t seem fair but we made it.

I’ll be back to the river anytime this winter the weather allows it and I won’t give up on them, I’ll keep trying everything until I find their chocolate chip cookie because I know they are in there.