Carp? That’s the question I get asked most anytime someone ask me, you catching anything? Yes carp, on purpose.

When I was a kid I spent most daylight hours on, in, or near some water and as a kid it wasn’t about anything but fun. I’ve had more fun catching carp than most any other fish I’ve ever caught. Eventhough here in the US it is not considered a game fish and actually most often referred to as a “trash” fish you can’t deny the fight that carp put up.

In most of Europe these fish are what the large mouth bass is in the states. There are tournaments held just for them and lakes built for carp only. There are even fish in certain lakes that have been caught dozens of times and have names. Hey I’m all for whatever makes people happy, I don’t know that I could go as far as naming them but I do have respect for these fish.

I’m not gonna lie and act like I’ve never killed them because I bow fished often for years and plenty carp fell victim to my arrow but I do still respect the fish as a fighter. I’m not sure how they got such a bad rap here but honestly because of that they are very very abundant and it doesn’t hurt my feelings that most people over look them.

Here’s a few things you need to know to catch these fish. First off this can be as hard or as easy as you make it. Like anything you do you can over spend on gear and look the part or you can go catch fish and have a blast.

Carp can be found in most any water but lakes and ponds are the easiest to fish in my opinion. When you go looking for a place to fish a good place to start is around ducks, yes ducks, not wild migrating mallard ducks but park ducks. Any water that has park ducks has people throwing bread in the water and just like the ducks the carp love bread so if you are near a park or dock where there’s people throwing food in the water then you are off to a good start on catching a carp. The good thing about these fish is they are used to the traffic of people walking around and dogs barking and kids throwing things in the water and they don’t spook like fish that are more wild. I’ve site casted to wilder carp with a fly and they can be very spooky. I still love doing that but sometimes I just wanna go sit down and do some easy fishing. 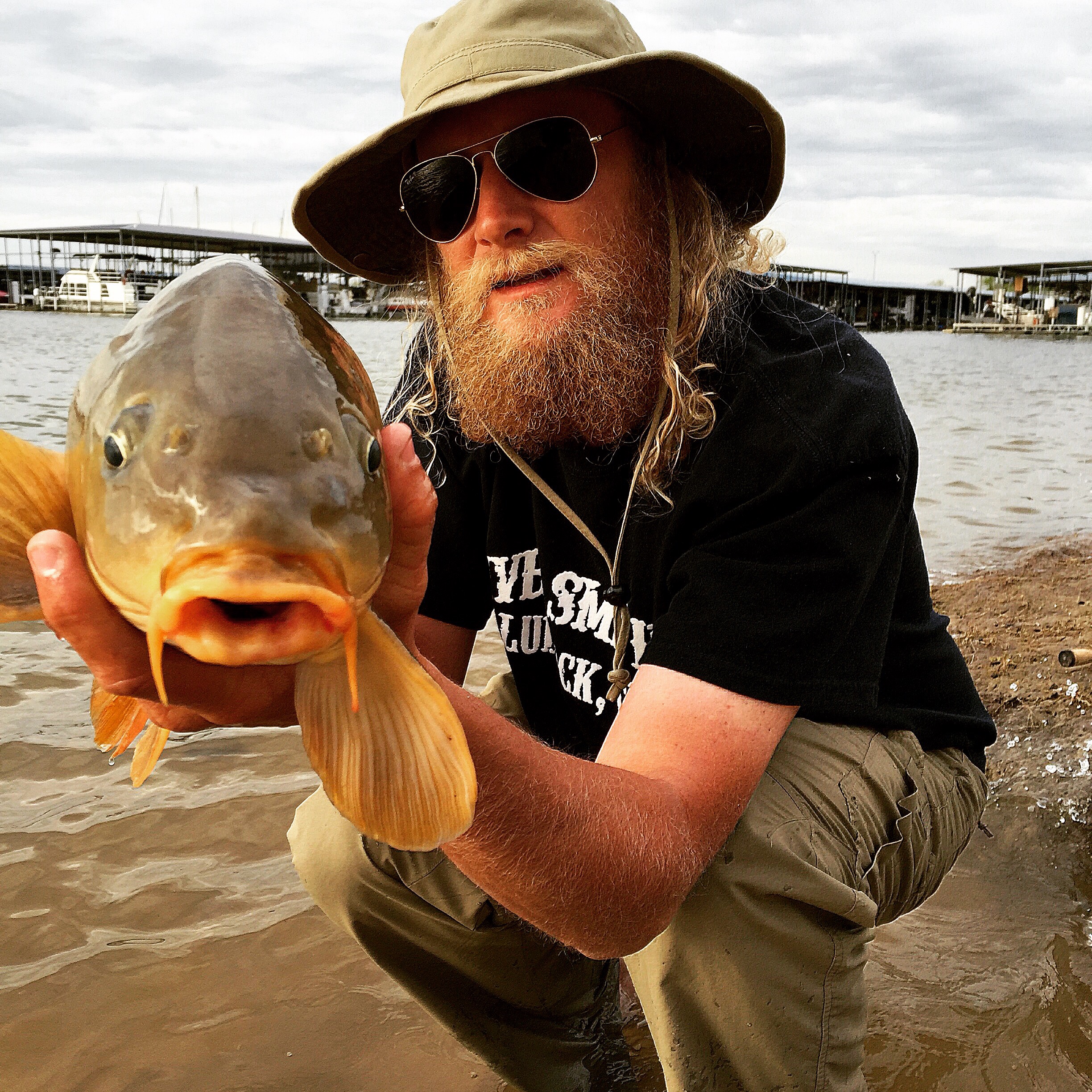 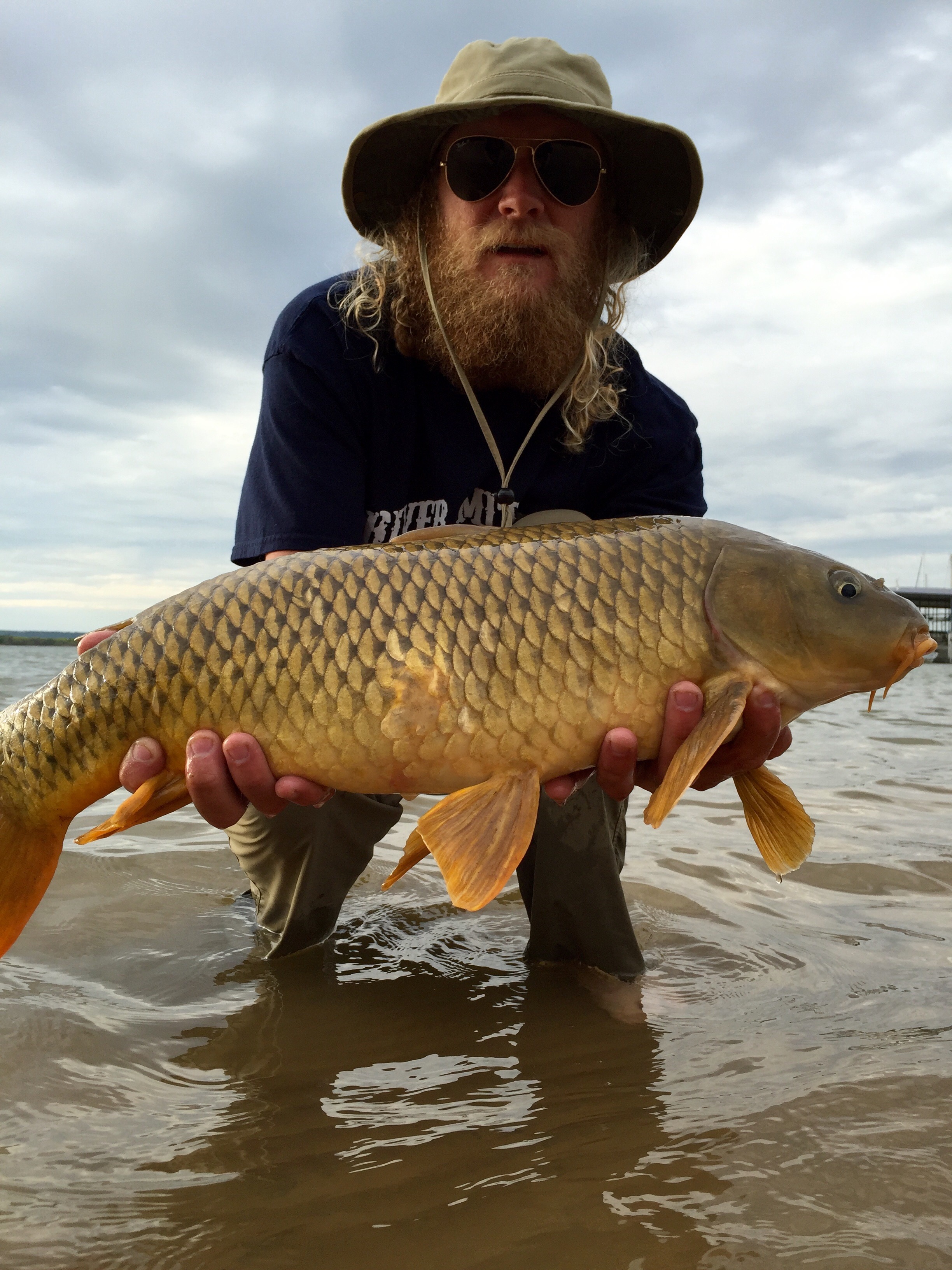 There’s a million ways to do this but here’s what I do and it works for me. The Europeans use very advanced techniques and some have thousands of dollars of equipment and some of this is justified because those fish are fished for constantly and get smart but lucky for me I’m after fish that basically eat bread and duck food undisturbed most of their lives and they are easy to catch.

A trip to the store and about $5 will get you a long way when making bait. I get one can of quick oats, one can of cream style corn, one can of whole corn, and some kind of extract. This can be vanilla, mint, banana, almond, anise, the list is as long as the bakery aisle so I’ll leave it to you to decide what your hands smell like that day. Start by pouring the whole can of oats in a gallon size zip lock bag, then pour the whole can of cream corn in the zip lock. Then a few good splashes of your extract, now here’s the hardest part, seal the bag and mix the ingredients up until it forms a dough. I know I know it’s technical but follow these directions precisely. I do this at the lake and take any left over home to the freezer. 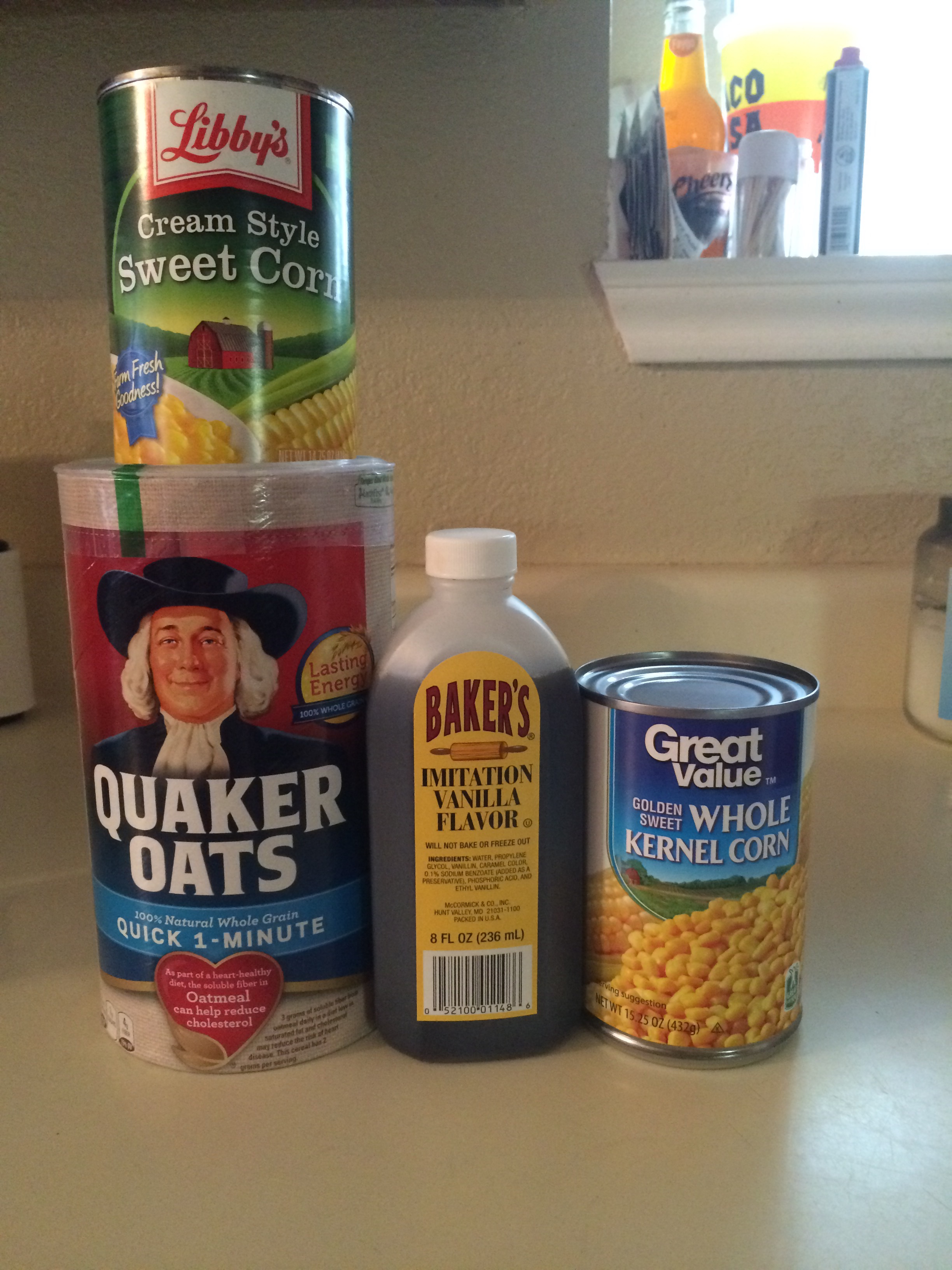 Now that you have some bait go to your fishing spot and open the whole kernel corn and sling a few handfuls out in the area you’ll be fishing. I think this kind of gets them moving and feeding. Take a few kernels and put on your hook, I’ll talk about hook size and shape later, and then form a nice ball of the dough around your baited hook so that you have a baited hook completely enclosed by a ball of scented dough. Here’s my theory on this and again I’m not a carp expert I’m a guy that’s figured out a few things on how to catch fish, that’s it. In my mind what happens is the oat mix stays on the hook long enough to get to the bottom but as it soaks up water it begins to break up and the scented oats begin to drift around sending a scent trail and also a visual trail that will attract the fish. Now because we baited the hook with whole kernel corn when our ball of oats dissipates we will still have bait right in the middle of the chum area. That’s what happens in my mind, what really happens I don’t know but it works so let’s just go with my theory and sound like we know what we are talking about. 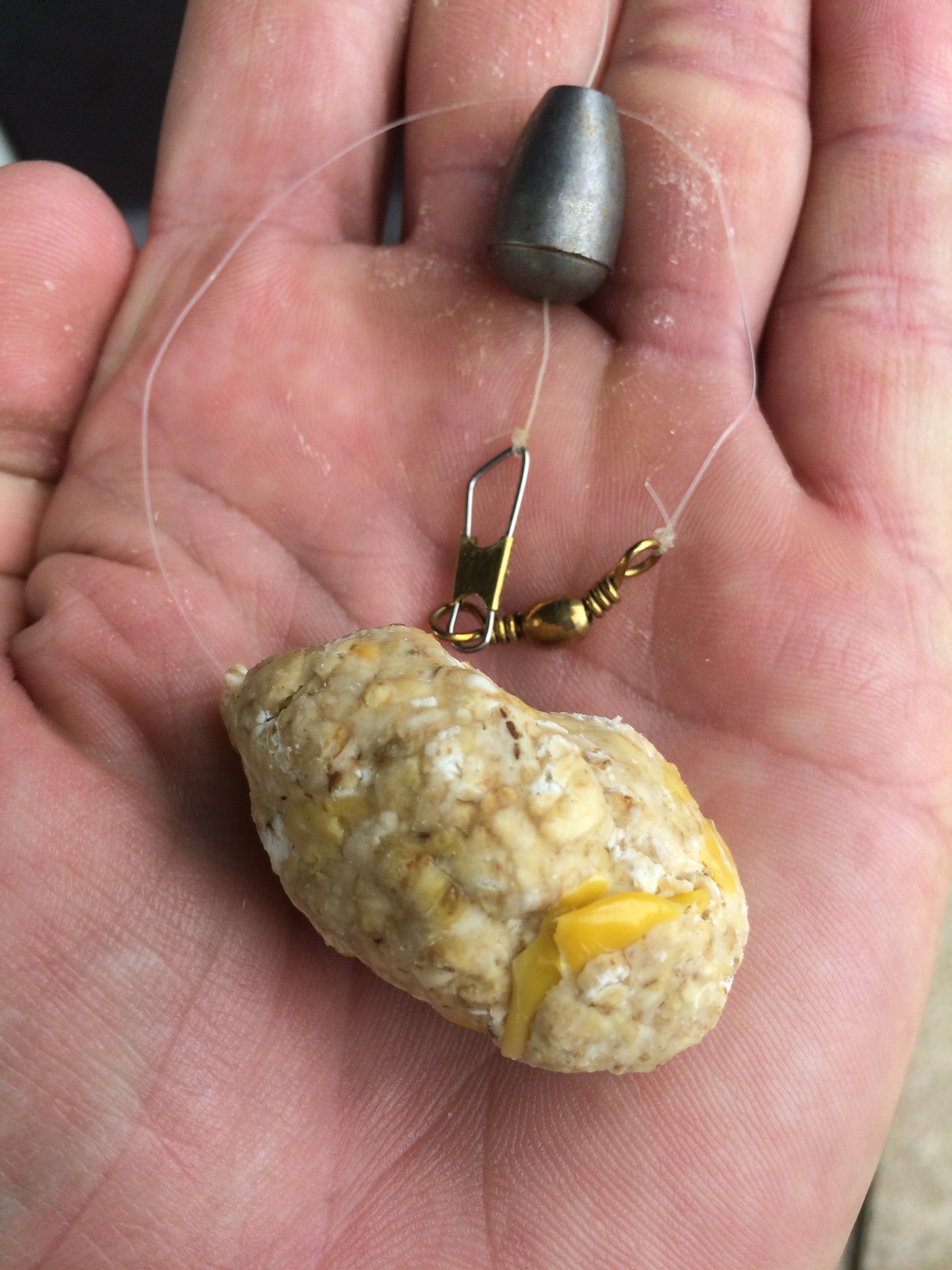 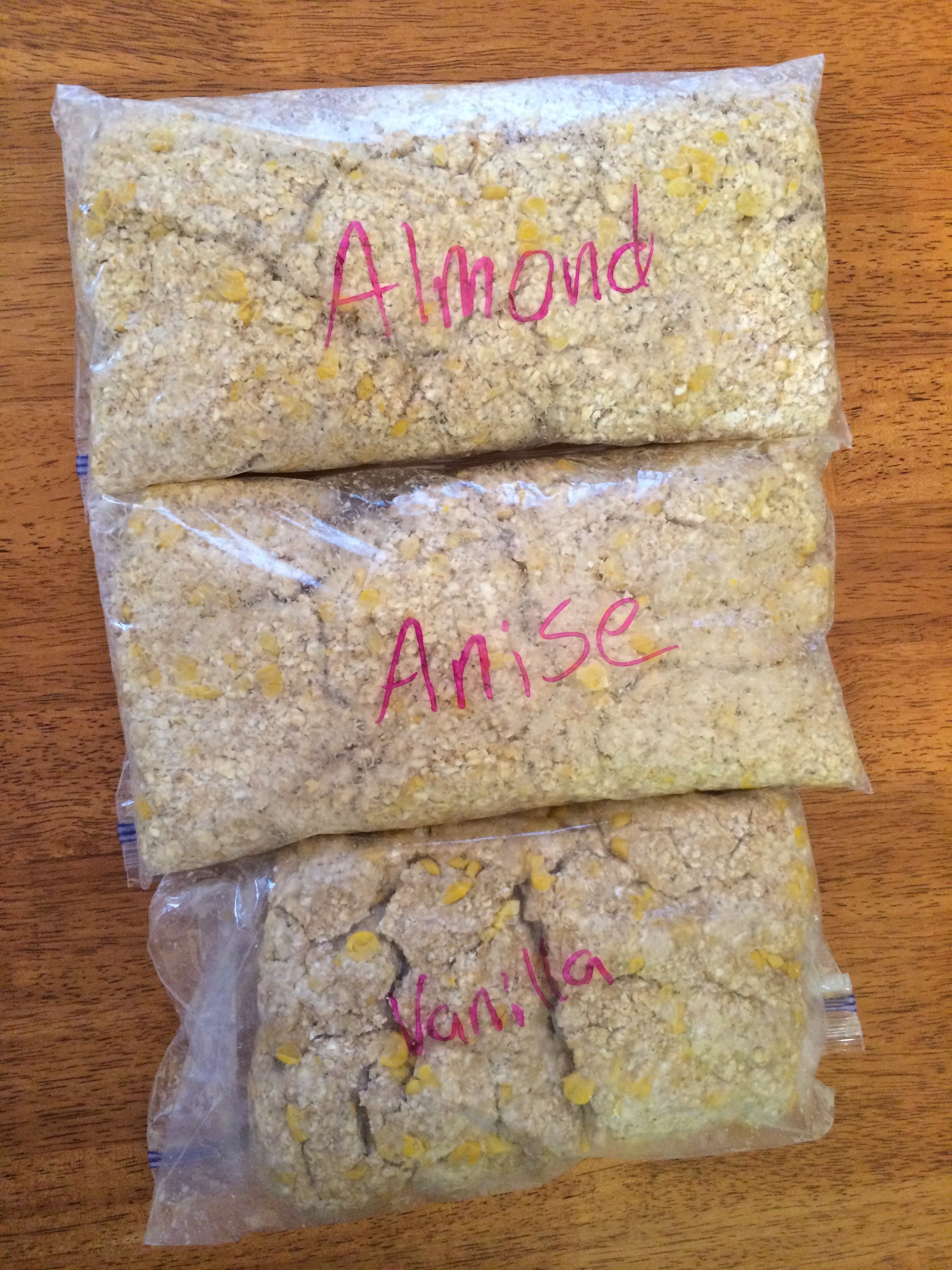 There’s one thing about carp that most people don’t expect and that is the strike. These are not predator fish but they do hit very hard and fast I will give you my theory on this also and again I may or may not be right.

Years ago I sat at a Cabelas and watched huge carp and buffalo feed along the bottom of an aquarium for hours and I noticed that they suck up and spit out several times anything they eat. Sometimes they even sucked up rocks and passed them back out through their gills. What I think happens is the fish is sucking up the bait and spitting it back out and upon taking the bait in they feel the line or the hook and they spook. That’s when they make a big run to avoid what ever danger they thought they felt so the strike isn’t as much an aggressive bite like say a big catfish or striper as it is a flee from danger, for this reason it is very important to  allow the fish to take line to avoid losing your gear however expensive it may be. I once lost a $5 rod as a kid because I didn’t know this and when I was a kid we only had one rod and getting another meant mowing several lawns for the money, you learn fast how to avoid losing gear when you have to work so hard to get it.

Most Europeans use a bait runner reel. This is a spinning rig that will allow the fish to take line freely until a lever is flipped which locks down the spool at which time you set the hook. This isn’t completely necessary but is a big advantage. One way I found to do this is to just open the bail on your reel and allow the fish to pull line freely but watch close so that the line doesnt tangle around the handle or rod and result in the rod being pulled in anyway. The strikes can be very fast so just a glance away and you could hear a splash. 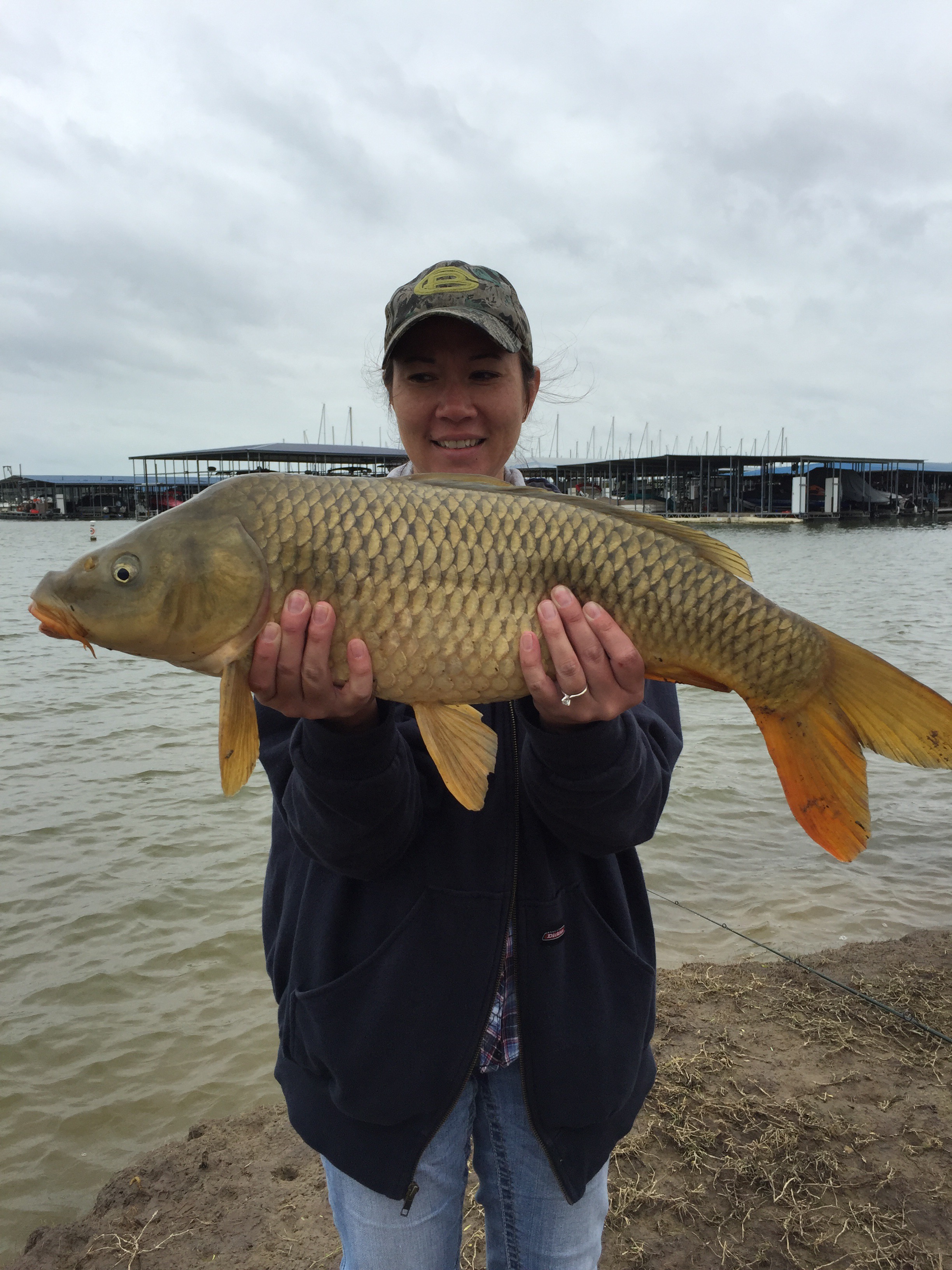 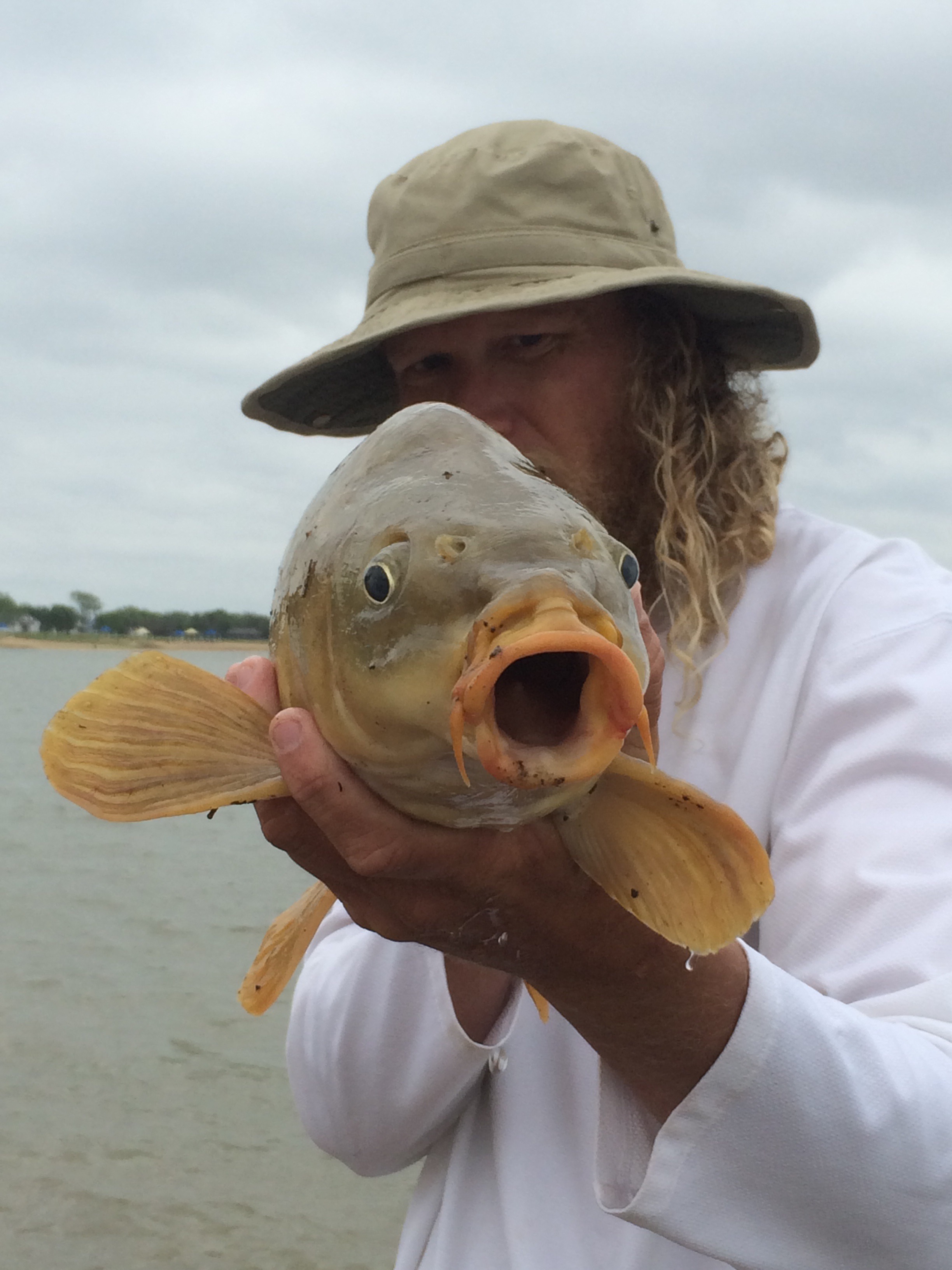 As for the rig, again this can be as complicated as you make it. There are rigs for carp that most fishermen can’t identify that include boilies and pop ups and hair rigs and weighted rigs and dozens of others but this can be done with the simplest of rigs. A stout #4 hook and a half to one ounce weight and a swivel is all that is needed. Simply make a slip rig with an egg sinker and short leader and you’re set. The hook should be stout, not the gold hooks most use for crappie, these fish can get very heavy and fight hard but don’t have a real big mouth so a small strong hook is needed.

Any set up you normally use for whatever kind of fishing you do can work. Sometimes for fun I use an ultra lite rig with four pound test line just for the challenge and fun of fighting the fish. A standard spinning rig with 8-10 pound test and the drag set right will land 90% of the fish you hook. 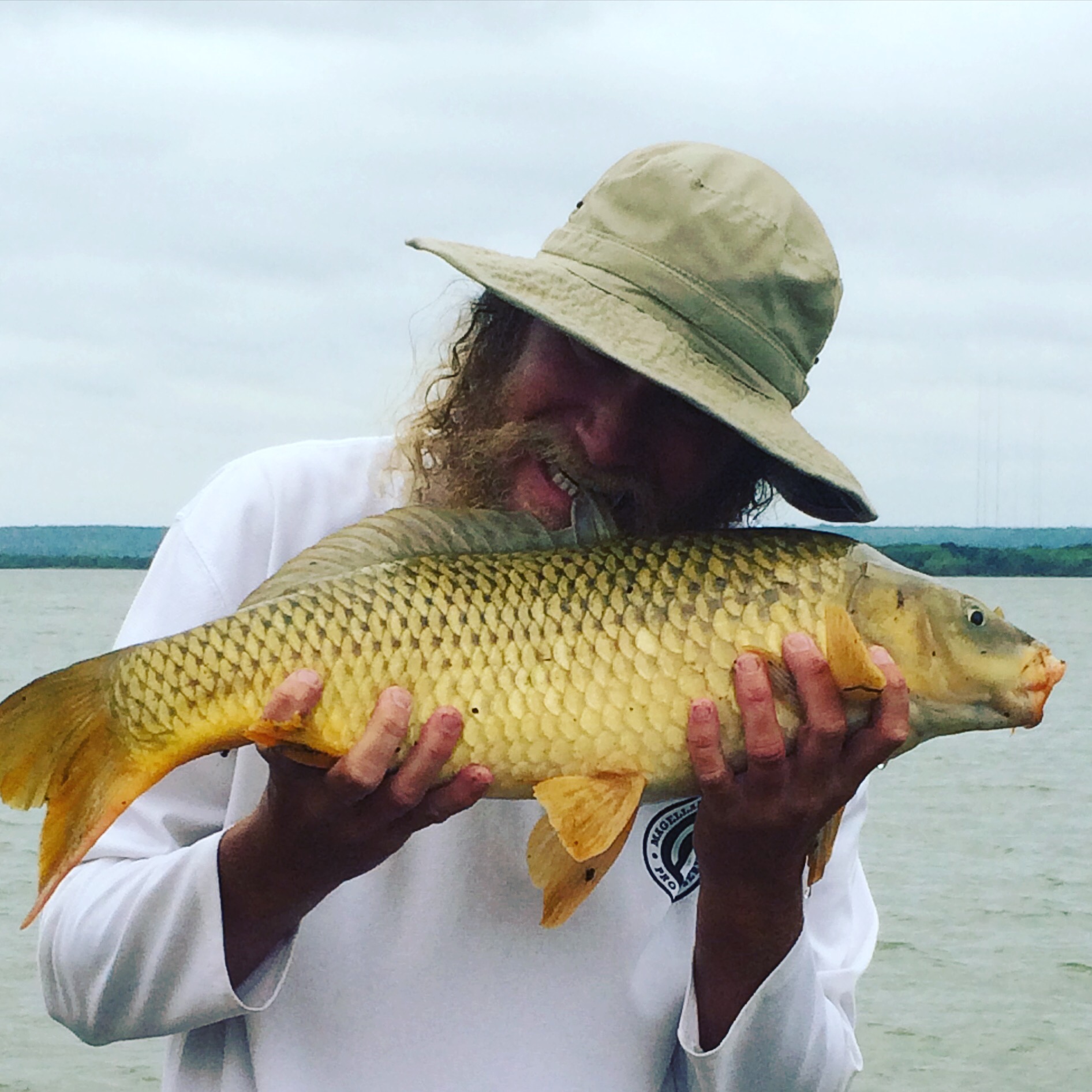 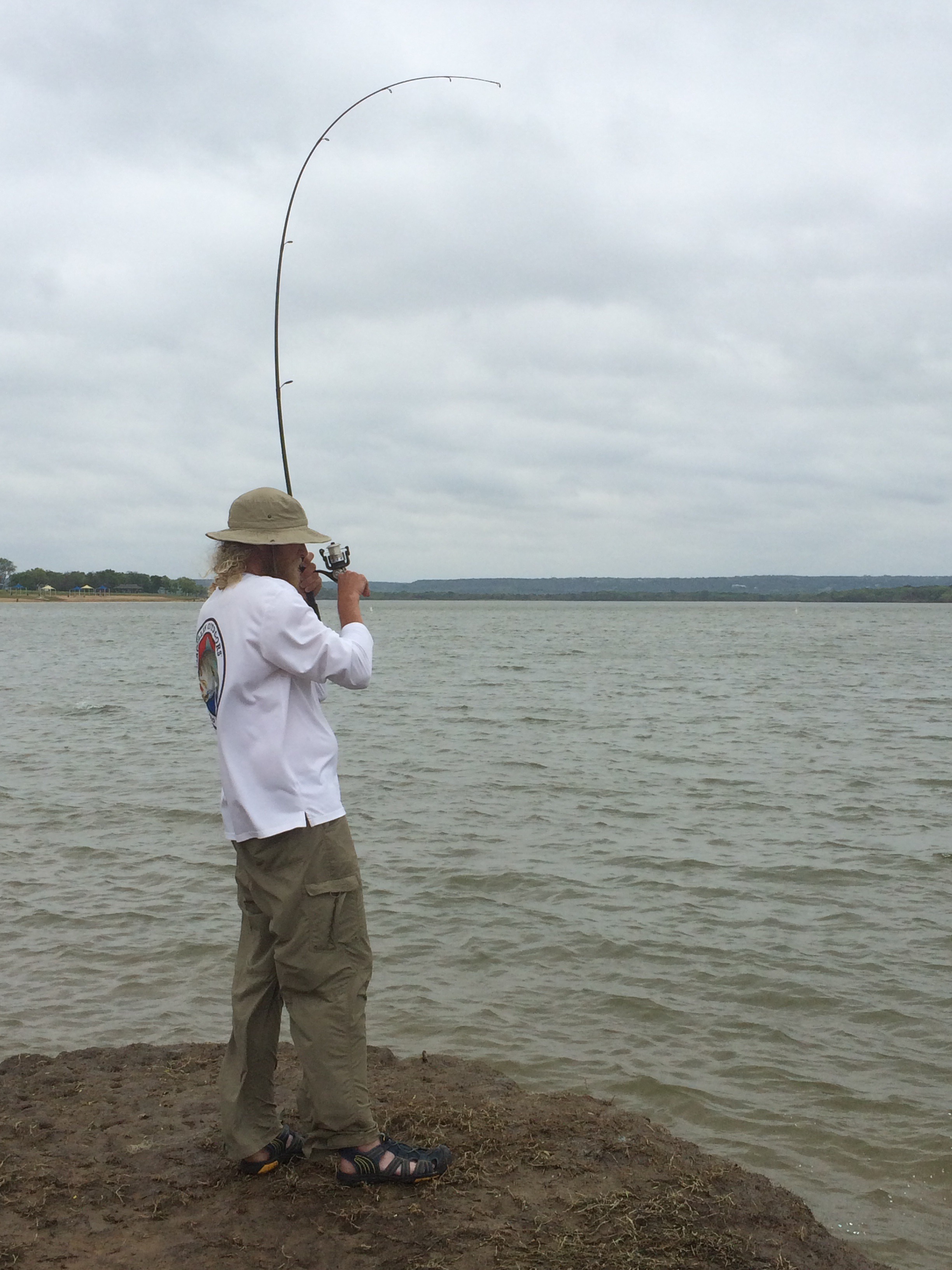 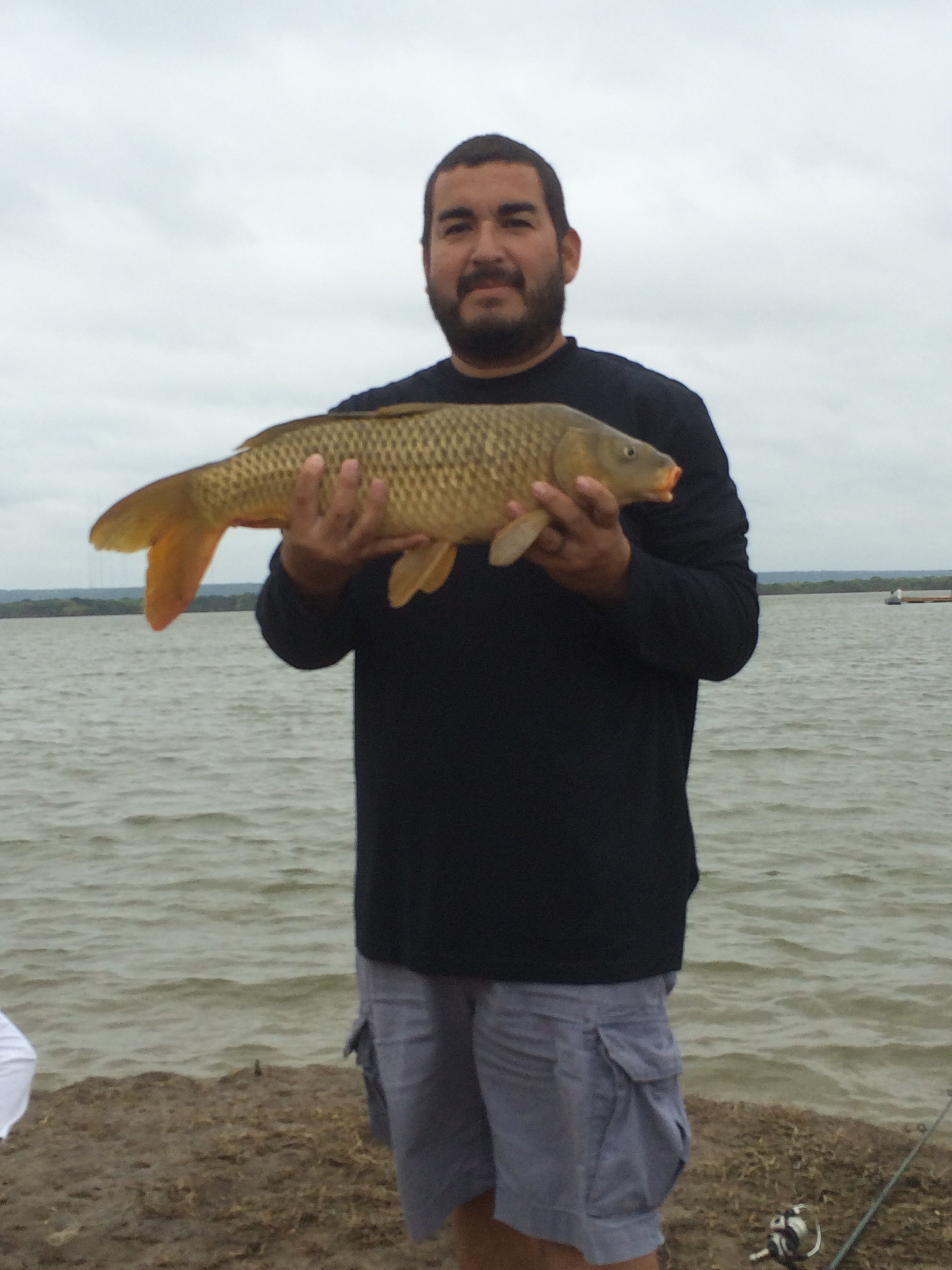 A lot of a carps diet is nuts, seeds, vegetation and even berries or fruit if the tree is hanging over the water. As a kid I fished under a mulberry tree in the spring and summer that hung over a small creek and the carp would eat berries until their mouths were stained purple. Recently I found a creek with an elm tree that was dropping small seed pods in the water and the carp were feeding on these floating seeds. 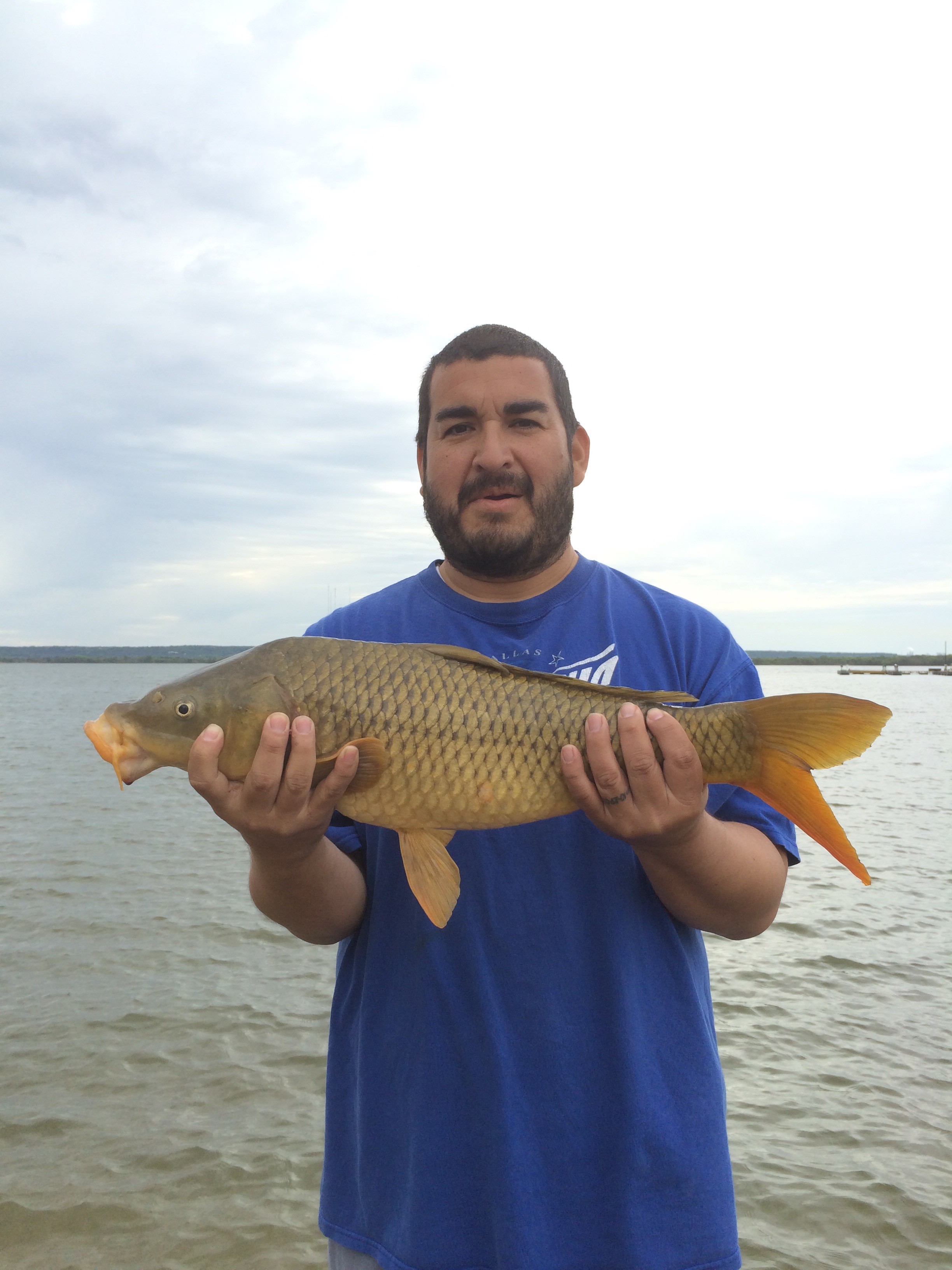 Carp are everywhere and are cheap and easy to catch but I doubt you will find a harder fighter pound for pound in freshwater and once you fight one you will want to start to target them more as a game fish.