I just had enough light to see the 75 yards across my little food plot when I caught movement of a large bodied deer. I grabbed my gun which I decided I would use that morning due to events that had taken place earlier in the week.
When I got the scope on the deer I realized it was “Thunderneck”, me and him go back a few years and he’s an old warrior that I had full intentions of shooting this year but he didn’t stick around long in the opening and was gone before I could settle the crosshairs and again it seemed I wouldn’t take home a deer.
This trip started four days earlier on a cold morning in this exact stand looking at a small six point and enjoying the morning. I did not think at the time I would see so much game and struggle so hard to take something so the little six ate his fill and left. 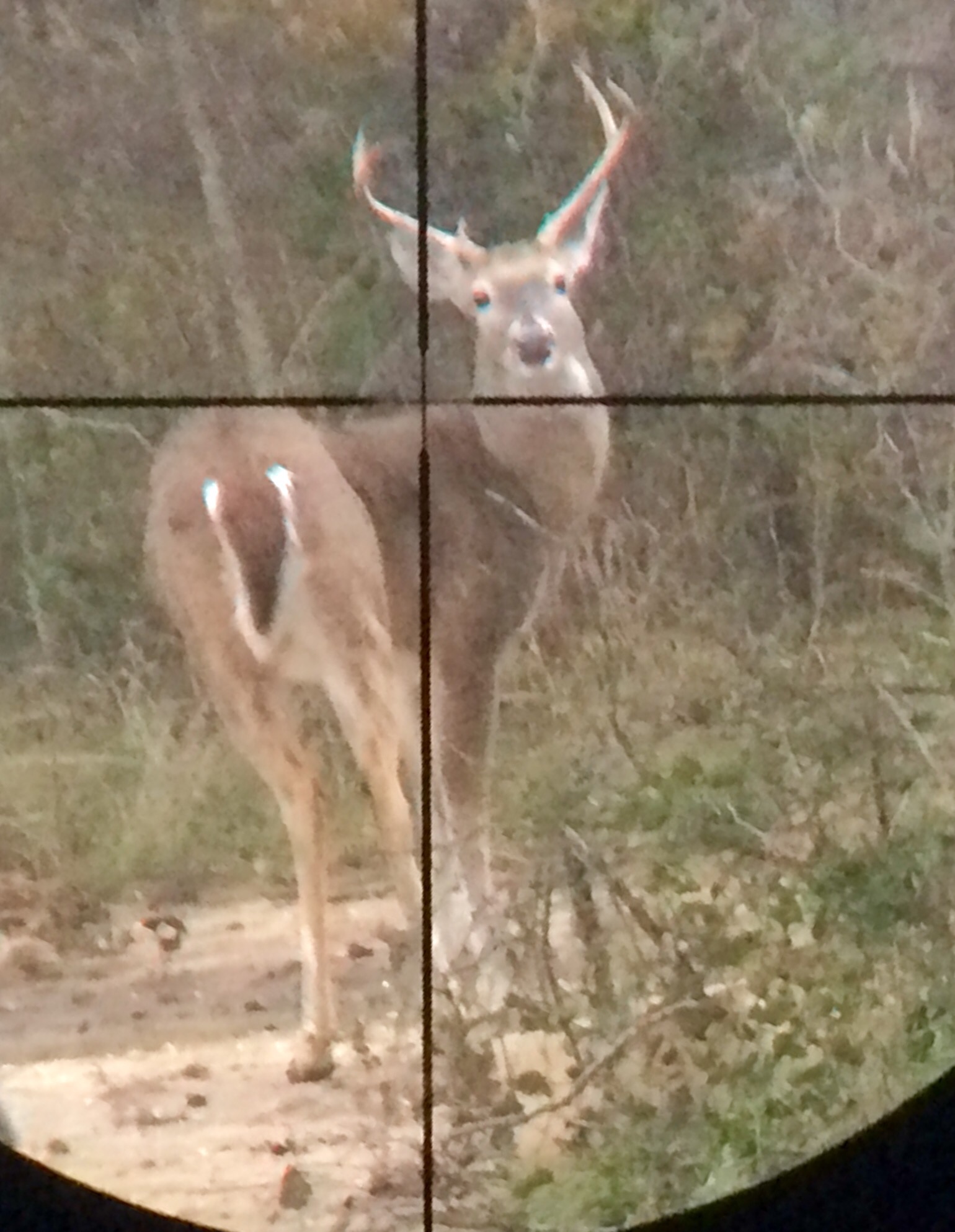 The next day I bowhunted a couple different places and seen plenty of deer but nothing in range or anything that was legal. This county has an antler restriction that requires bucks to have an inside spread of 13″ or be a spike. More than one buck came into range but several were forks and one nice 8 that was just at the legal limit so I decided he was too close and let him walk.
On the third day I seen the six again along with a nice 8 point that I should have taken but let them walk also. Sometimes the situation don’t seem right for me. I don’t always have to kill a deer especially when gun hunting. I love to shoot arrows and rarely allow a legal animal to get a pass when bowhunting but seeing deer is usually enough to keep me occupied when gun hunting unless it’s just a really big deer I don’t shoot many with a rifle.
I returned to camp pretty frustrated that I’ve seen so many deer and hadn’t even drawn my bow yet so I decided to hunt more with a gun. 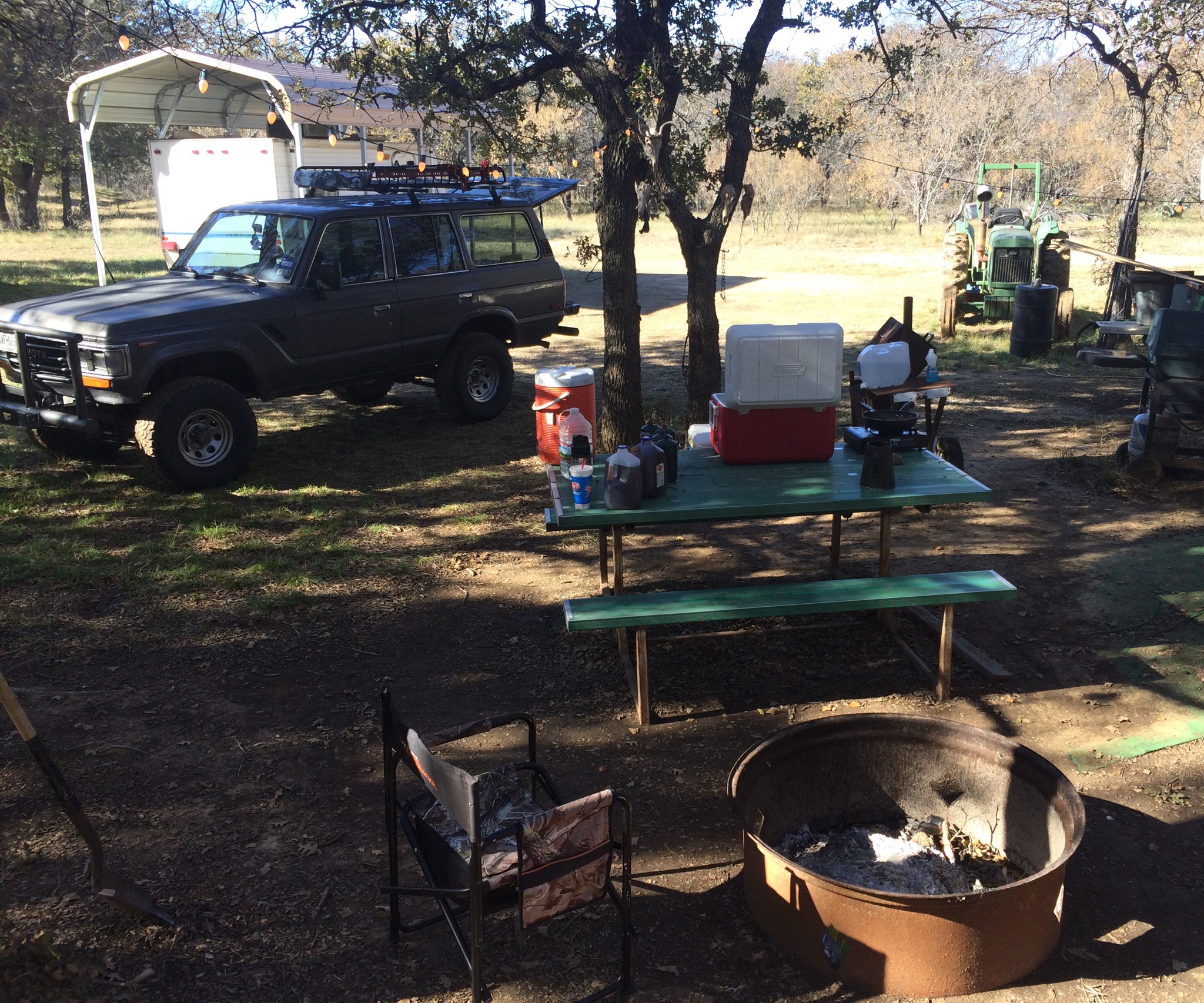 Normally I don’t sweat it but I have a couple out of state hunts coming up and didn’t know how much time I would have to get back to my favorite ground in Jack county. Plus when I texted home Mary Ann thought that we might need some more deer meat and I said no problem, except for it was becoming a problem. All I could think about sitting in that stand was my wife at Kroger bumping elbows with some yuppie women comparing prices of 80/20 ground chuck. I shuttered at the thought of someone I know seeing her buying meat at a store. I’m a hunter, I’m a man, I will bring home the meat for this family. I’m the guy in the neighborhood that everybody knows hunts, kids down the road smell the smoke from my grill or smoker and they know something good and likely something they’ve never eaten is being smoked and they come to check it out. The waitress at one of our favorite cafes even said to me once, “aren’t you the guy with all the dead stuff on your wall?” I bowed out my chest and said “yes I am”. I’m that guy that supplies his non hunting buddies with deer jerky, fish and turkey breast. How in the world would I ever recover if one of these people seen her in line at a meat counter asking for hamburger meat? Something had to be done so the decision was made I would take a deer with a rifle.
My friend called and his daughter would like to come out and sit in the stand and see what this hunting was all about and I would not think of saying no to a kid who had never been in the woods so we prepared for an afternoon hunt.
I was on my third or fourth day of a lot of hunting and no running water so I’m sure I had an “aroma” about me at the time and as you can imagine a 16 year old girl is the exact opposite of that so we head to the stand, me smelling like a billy goat and her like a field of lilacs, or whatever girls wear, and her dad along to video the whole thing. I honestly didn’t expect much as the temp had heated up considerably and deer don’t really like the smell of billy goat or lilacs that I know of.
We got in early at 2:31 and at 2:35 I glance back and see a nice black hog meandering along without a care in the world. I couldn’t believe it, I never see them this early and her first hunt was gonna last a grand total of 5 minutes if I did my part, sadly I did not.
The brush was thick where he was and when he stopped I didn’t have a clear shot. I let him walk forward but again no shot, I moved over trying to get any kind of lane to get a bullet in him and when I thought I could sneak it through I let one fly. It was a bad decision, I wished I would have waited but I really wanted to kill something with them in the stand and I rushed the shot. The bullet hit half way down the back as the pig went away from me. He lunged forward and trotted away, I hit him again between the shoulder blades and he did a spin out but never came off his feet and then disappeared into the brush.
I didn’t feel good about any part of this. I don’t like that a kid who never hunted seen an animal wounded and not recovered, I didn’t like that I rushed the shot, and mostly I didn’t like that a critter was suffering somewhere because of my poor shooting.
We looked for an hour or so but decided that he crossed the creek and I thought it best to wait him out so we returned to the stand and sat out the evening without another sighting of any kind. It happens I guess but could have been prevented. I’ve killed dozens and dozens of hogs with that .22-.250 and I know bullet placement is extremely important with that small caliber on tough hogs but I didn’t do my part.
I went to camp and lit a fire and my guests returned home with a story but without a happy ending to it. I will have them out again and we will change the way the next story ends. 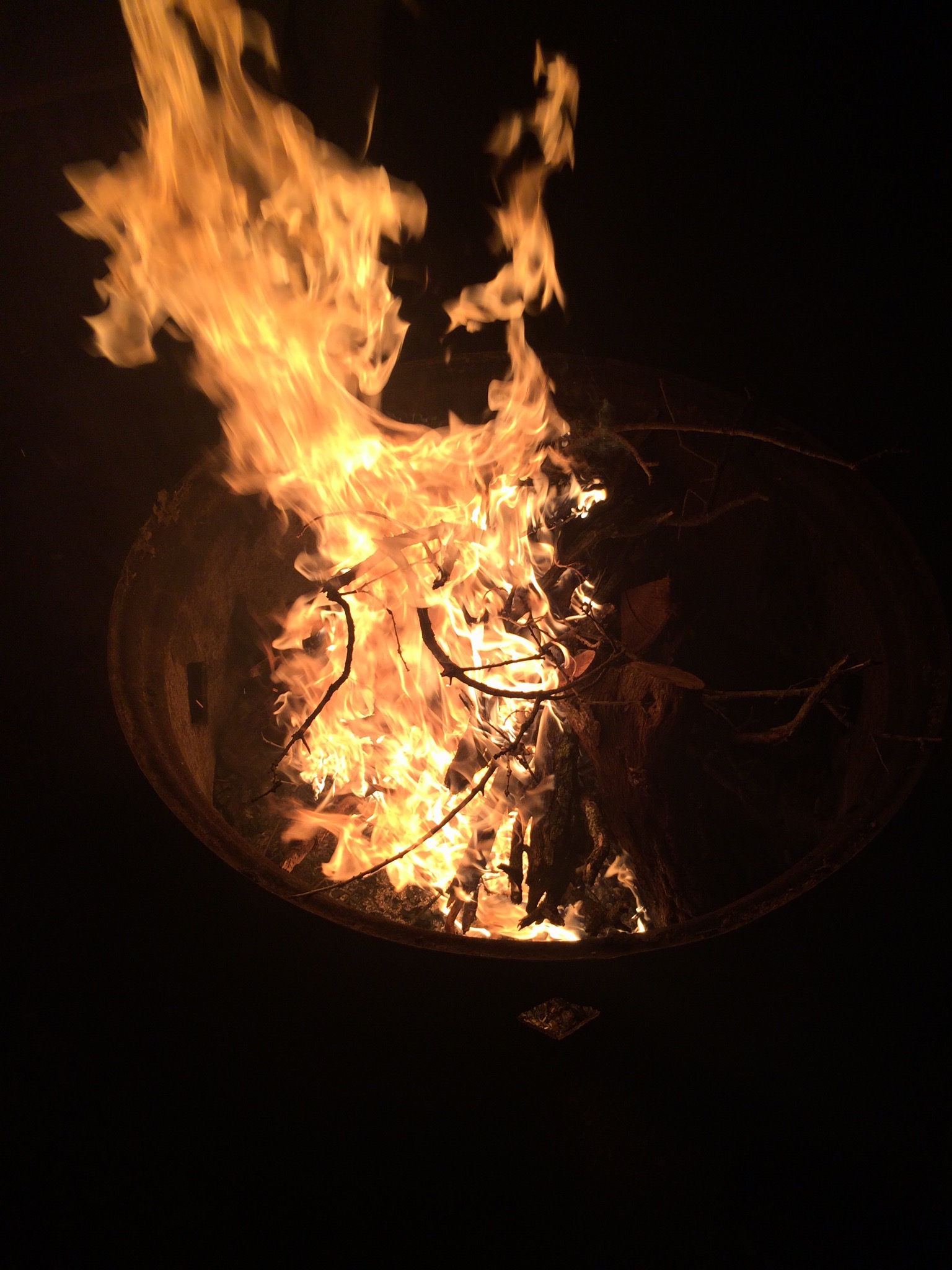 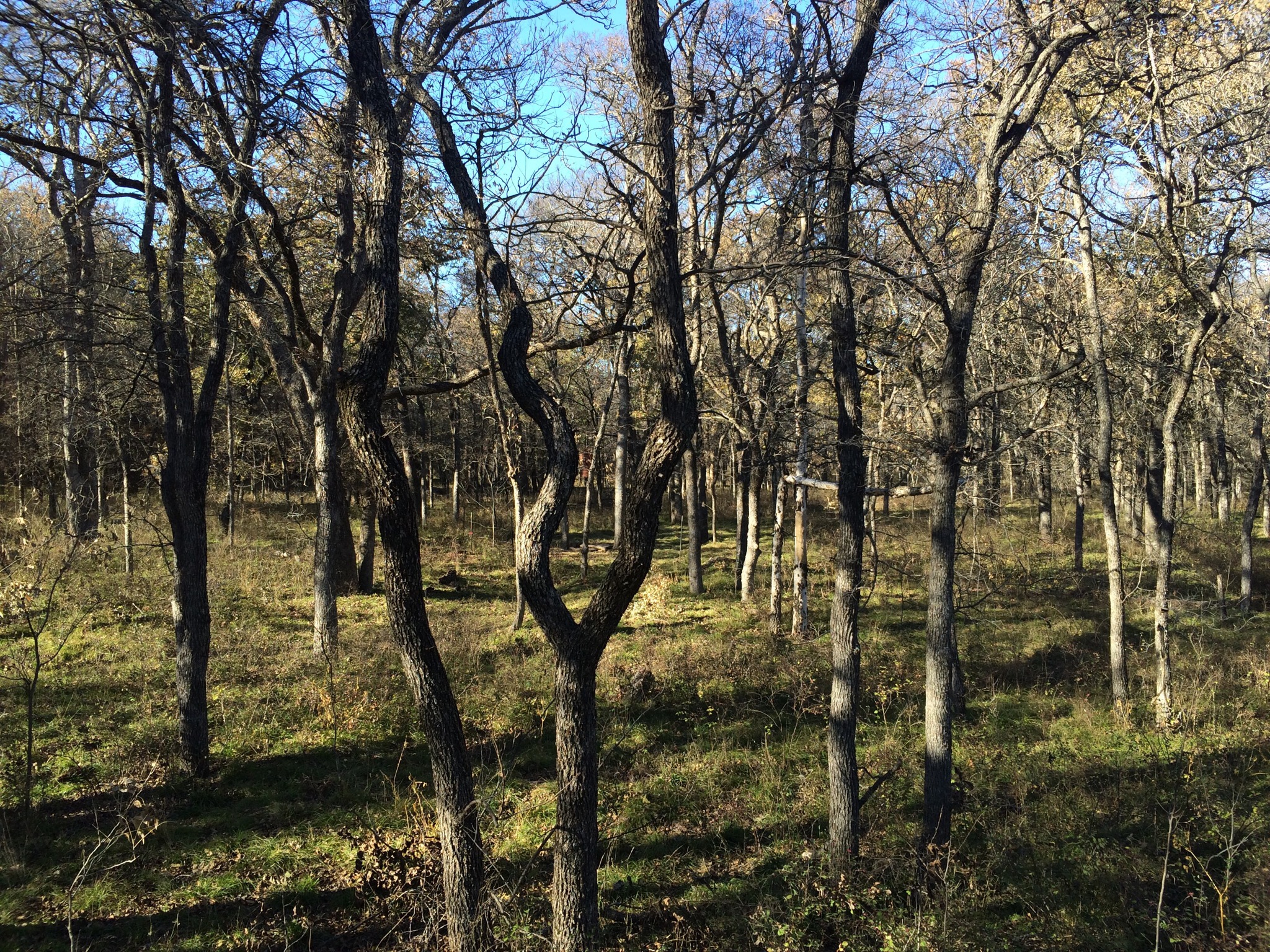 That brings me back to the food plot looking for the six point that had been eating pretty regular there. Thunderneck is at least a five year old deer that has been a fork horn his entire life. I know this deer well and hope to get to tell the stories I have about him when my kid or nephew or someone I know kills him.
Just as Thunderneck disappeared into the brush I got a sinking feeling in my stomach. Am I really gonna leave here with out a deer and have to cut Kroger coupons out of the Sunday paper?
I scanned the brush around the food plot hard hoping he was circling trying to wind some does and would make an appearance later in the morning, but he didn’t get five years old being dumb and he never returned. 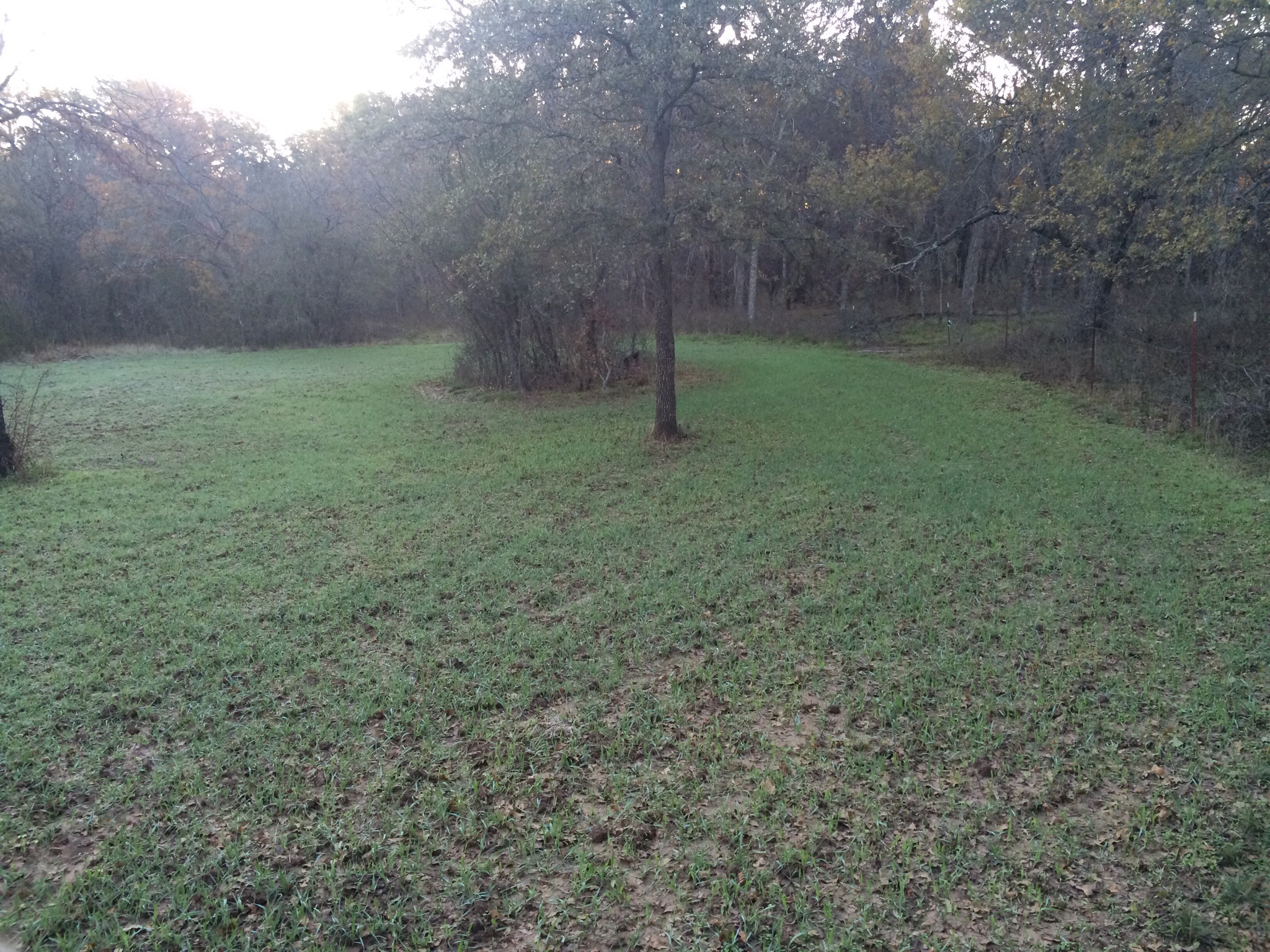 Later in the morning the six point I took pics of days ago is back and I have to make a decision. Do I wait for my old friend Thunderneck and hope he returns or do I take this six point that obviously is not living up to the potential of the other deer his age in the area?
I let him eat for ten minutes when a small doe walked by my stand at 20′ and headed straight to the center of the plot. The six immediately put his nose in the air and chased her around the plot. She stopped and peed and the six was on it, lip curling and grunting like crazy. I knew this doe was in heat or very close. She would still run from the buck but he was very interested. I hoped that my old friend would catch a nose full of this and make a fatal mistake of chasing her out in the open. Another ten minutes went by and I seen a ton of cool deer behavior and heard a buck grunting and seen him lip curling but I needed deer meat.
The doe ran out of the plot a number of times and each time she ran farther away and each time the six was slower coming back and finally I had made up my mind and when he cleared the brush I would take him.
The shot was short, about 75 yards, and the deer only went far enough to turn around and he was dead.
I was happy, I’m always happy when I’m successful on a hunt but I had mixed emotions about the decision I made but it was done now so let the work began.
I got the deer squared away and spent the next two hours looking for the hog that I had hit but never even found a spot of blood. I know the shots hit him as we had the video and I had watched the bullet knock the dirt and hair off his back but I finally gave up the search.
It was Thanksgiving day and if you have read the story I wrote on last Thanksgiving you will know about the Marie Calendar disaster of Thanksgiving 2013, I was not gonna let that happen again so I headed to Howells Cafe in Springtown. 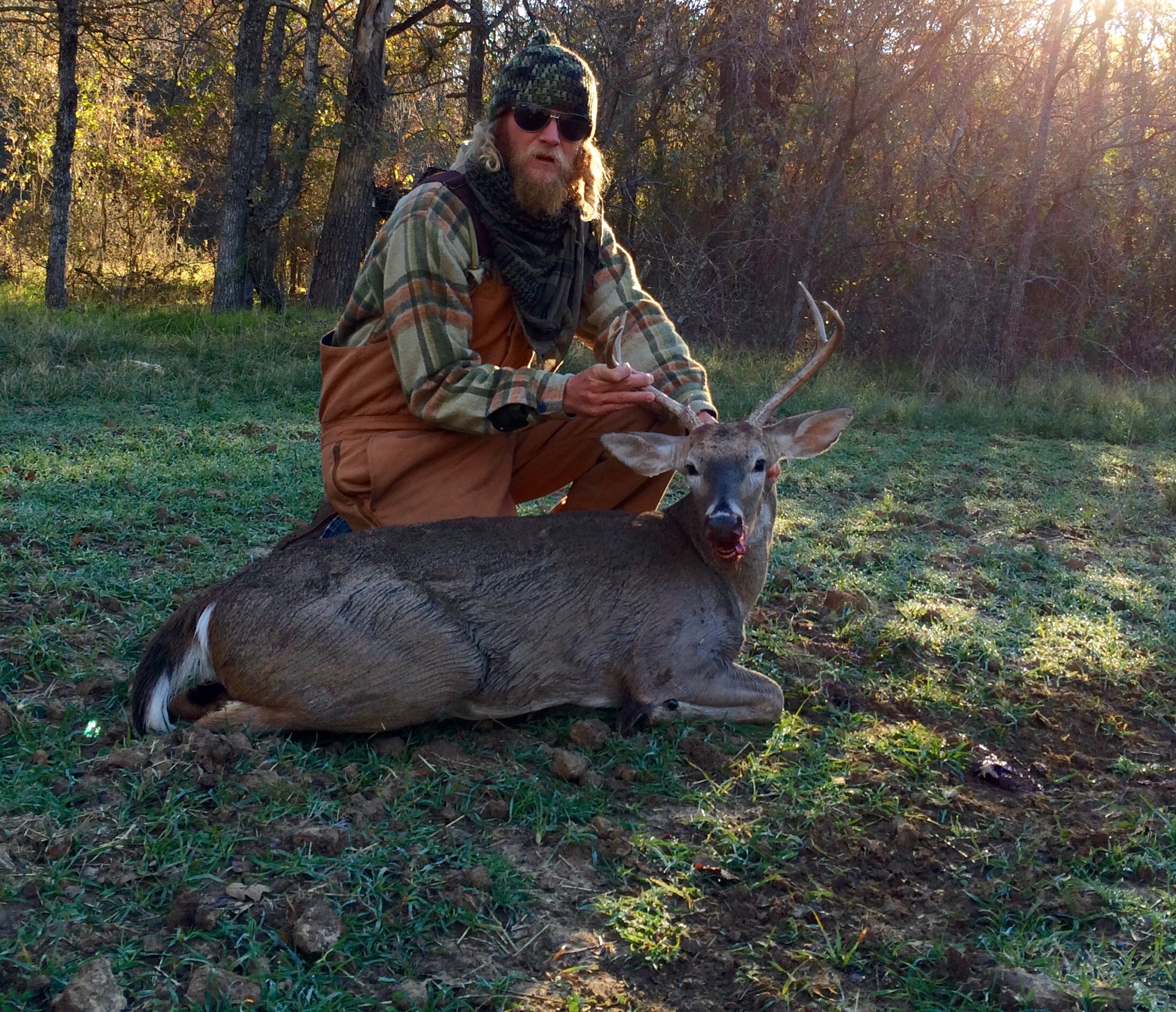 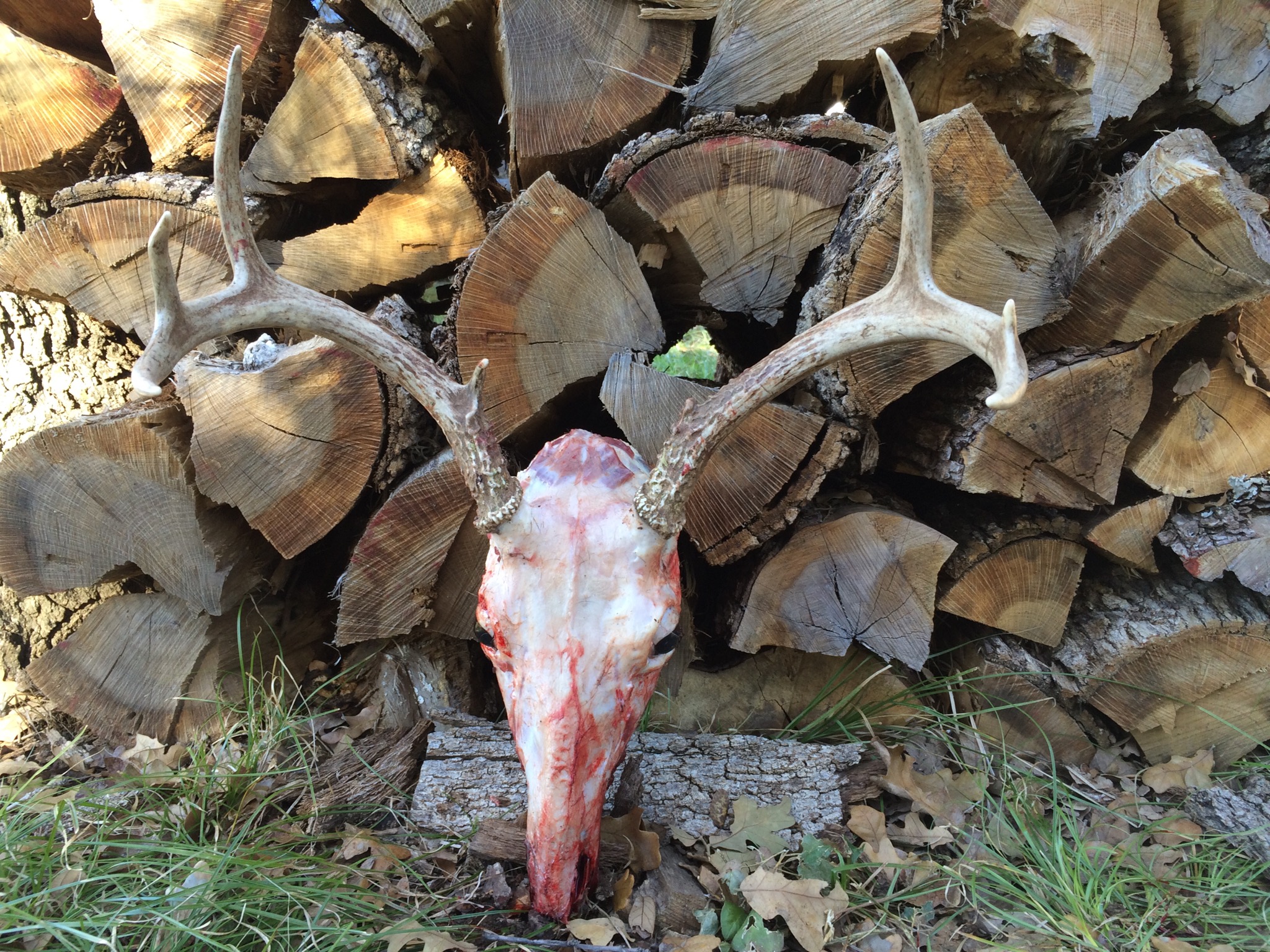 I’ve written about Howells before so I’ll just say now that the meal I had there was as close to a real Thanksgiving dinner as you can get without having your grandma cook it. 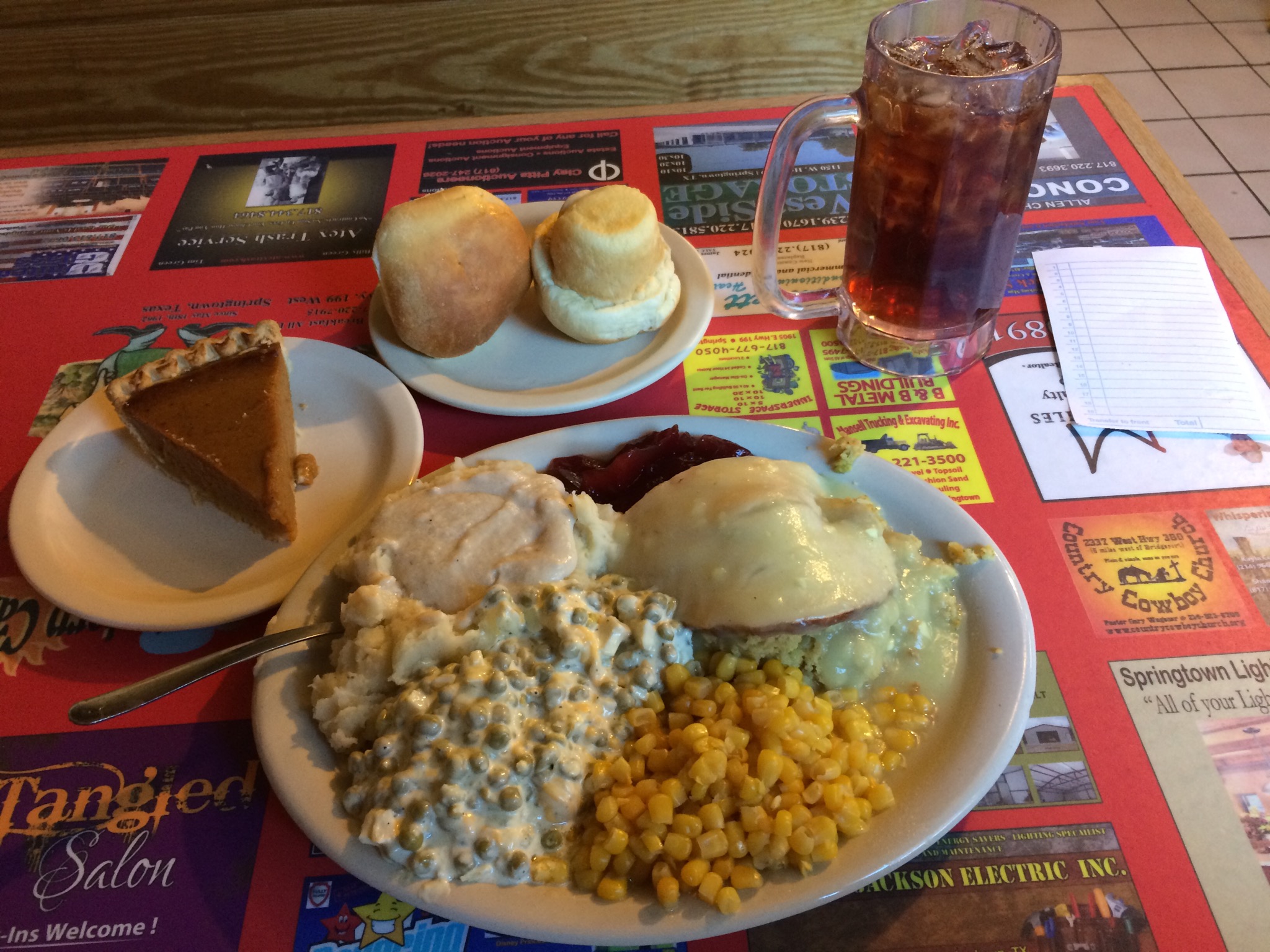 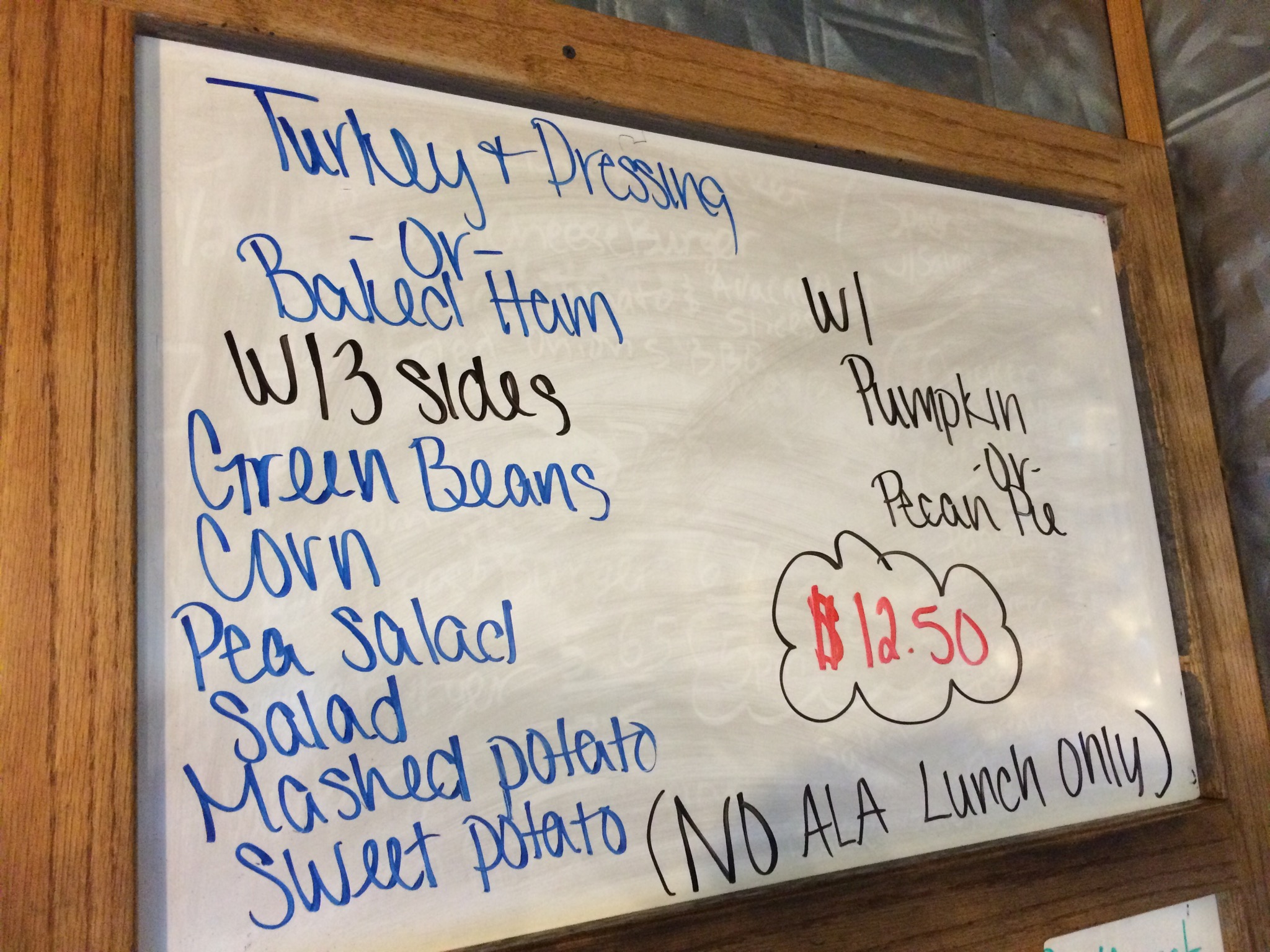 All in all it was a good few days, I upheld my reputation as a hunter gatherer for the family, I introduced a kid to the hunting world and I filled my buck tag. Now home to prepare for a week in Ohio bowhunting whitetails and a week in Michigan riding snow mobiles, visiting family and hopefully taking a deer or two there also.