Two down one to go in New Mexico

I promised dead animals and no rainbows in this post so here we go. We had a good idea of where two good bucks were hanging out from our scouting the day before so we started the morning right where we had seen one of them that morning. The weather was cold, windy and rainy so I would be lying if I said I couldn’t wait to get out of the jeep for a stalk. I was enjoying my coffee and Tucumcari’s greatest hits oldies radio station but knew when we spotted the right buck the hunt would be on. It didn’t take long to find him and several of his girl friends, of course they spotted us miles before we spotted them.
I caught movement about 500 yards out so I stopped and glassed that area and sure enough they were all bedded down but the one I seen so the hunt is on. I was reluctant to leave my heater, Columbian dark roast, and the Bee Gees but we had antelope to kill.
We got to 233 yards which is in range but the straight cross wind at 30+ mph was not gonna allow us a real comfortable shot so we drove around got the wind to where it wasn’t as much of a factor and tried again.
The rain left the grass wet which in turn left my feet soaking wet because the grass was taller than my boots and the water ran down my leg into my sock. I don’t even like the Bee Gees really but wet cold feet are way worse and I was wanting some coffee about now but I thought this stalk was gonna work so we trudged on. We worked slowly bush to bush until for what seemed like no reason they just decided that was enough and at 400 yards they bugged out. Strike two, new plan and warm up.
We made a drive a couple miles to another pasture and it was a couple hours of glassing and driving until we found antelope again. The name of this game is covering miles, this country is big and there’s a lot to glass so we stop at every “high” spot and just get behind the glass. A lot of times the high spot is a wind mill and I thought it was windy and cold on the ground, I was wrong it was breezy and cool on the ground it was down right cold and windy on those wind mills. 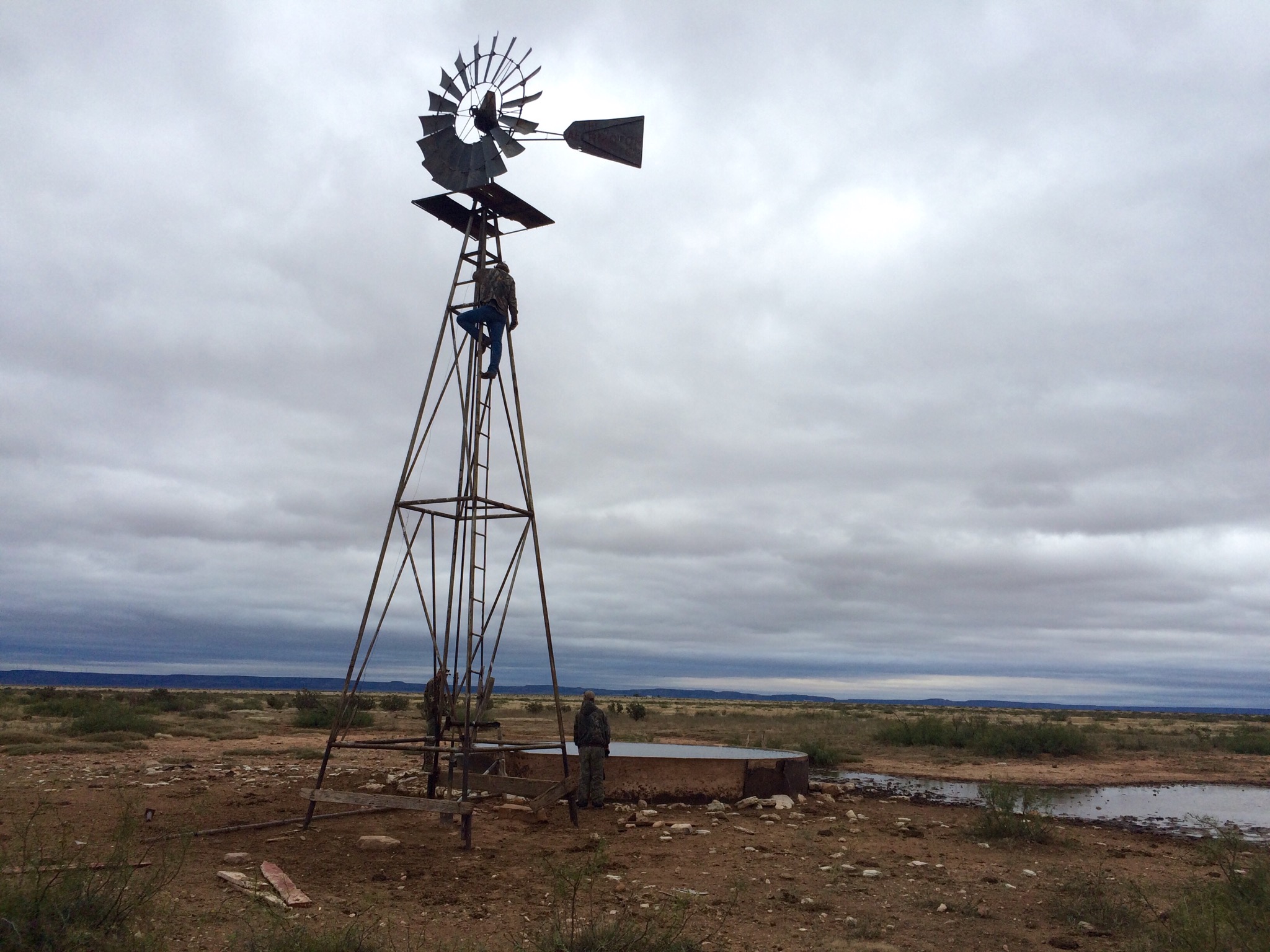 We located a group but they were two miles away and we had two fences between us so it was a long shot. On the way I found this dude in the road. It seemed cold for a turtle to be out but I guess he was hungry because he tried to chew my finger a couple of times. I wanted a picture of his eyes so I laid down in the road in front of him for five minutes with my camera waiting but he wouldn’t stick his head out so this is all I got. 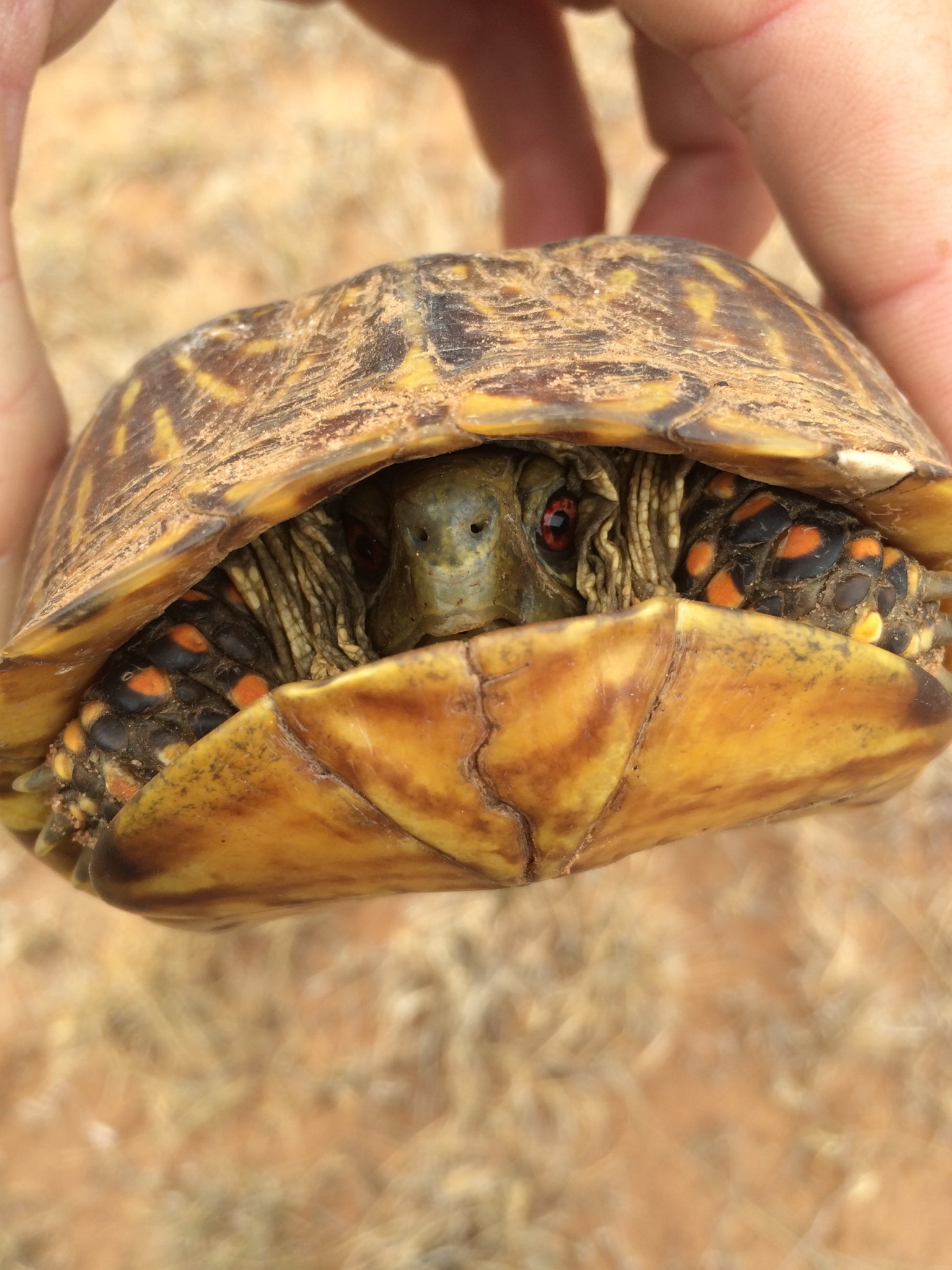 Ronnie doesn’t find the enjoyment in my efforts to take pics as much as I do and he stayed in the truck with the heater on shaking his head at me and grinning like I was an idiot. After I did my best Turtle Man impression and yelled live action a couple times I was done playing, back to the stalk.
We marked the antelope location in a triangle from a house on the horizon, a telephone pole and a county road. This would get us within several hundred yards when we got there.
I found a buck just as we got out of the jeep but he was a long way off so this was gonna be a long walk. We had covered a half mile and were making good time when the brush near where he was moving to ran thin so we had to get little I call it, to keep out of sight. We were finally at about 400 yards and I had ranged several bushes between us to get an idea of where we needed to be to get a good shot when out of no where a doe stands up and we are busted. Looking back I should’ve known there were others close but I was so focused on him I just didn’t see them. You can guess the result of this, one after another they started out and took the buck with them and another buck that was just as big. I didn’t notice the exact number because I was too busy making up cuss words to yell at them. It sucked but it’s hunting, we make the walk of defeat back to the jeep with not much conversation. There’s not much to say they beat us we move on.
Ronnie doesn’t to get hunt as much I do and he puts pressure on himself to make a kill and he was discouraged but I said hey it’s day one we blew three stalks so what we got this.
Back at the jeep the Doobie Brothers were playing and the heater was hot, I felt better already.
The does in the group ran out of sight and never looked back, the bucks only ran because the does did they didn’t know why so they didn’t go as far, this proved fatal for one. Normally its chasing does that gets bucks killed but this time it was not chasing them that got the buck killed.
We found him quick and got out to maneuver for the shot but just as the buck got clear he was just too close to the road and I didn’t want Ronnie shooting that way so we let him walk, this was not easy for Ronnie at all but he did. The buck went back into the pasture on our side so back to the jeep.
We never lost sight of him but we had to gain ground and get the wind right so we moved up. By now Ronnie is wound tight, he’s a shooter and wants this buck but we just can’t get it right. When the wind got right and the buck had found another buck to spar with we made our move. Both bucks were head down sparring so we basically ran from bush to bush to get inside 300 yards. The wind was still quartering but at 221 yards I felt like I could judge the windage on the .264 and tell Ronnie where to hold so he got down on the sticks. I said elevation and windage and the shot was off. I heard the bullet hit but didn’t see anything and the buck didn’t react much. I said shoot again hold top of white stripe and front of shoulder, this shot hit him in the brisket but not deep. When I say I said told I should probably say I yelled it. I don’t mean to be so firm but when it comes that time I get fired up too. Nobody jokes and acts the fool more than I do but it gets serious when bullets are flying. I know this made Ronnie more nervous so I said hey he ain’t going no where take your time and squeeze. Next shot was off the top of the back, I know it sounds like he can’t shoot but he can. The combination of wind and me in his ear and the fact the animal was wounded was just too much so he took a couple deep breaths, said tell me where to put the crosshairs and I did and Ronnie folded him. Sure it wasn’t the best chain of events but the buck is down and Ronnie’s blood pressure is going that way so it’s all good.
I knew he was wound up when after the final shot he just leaned over and breathed deep breaths. 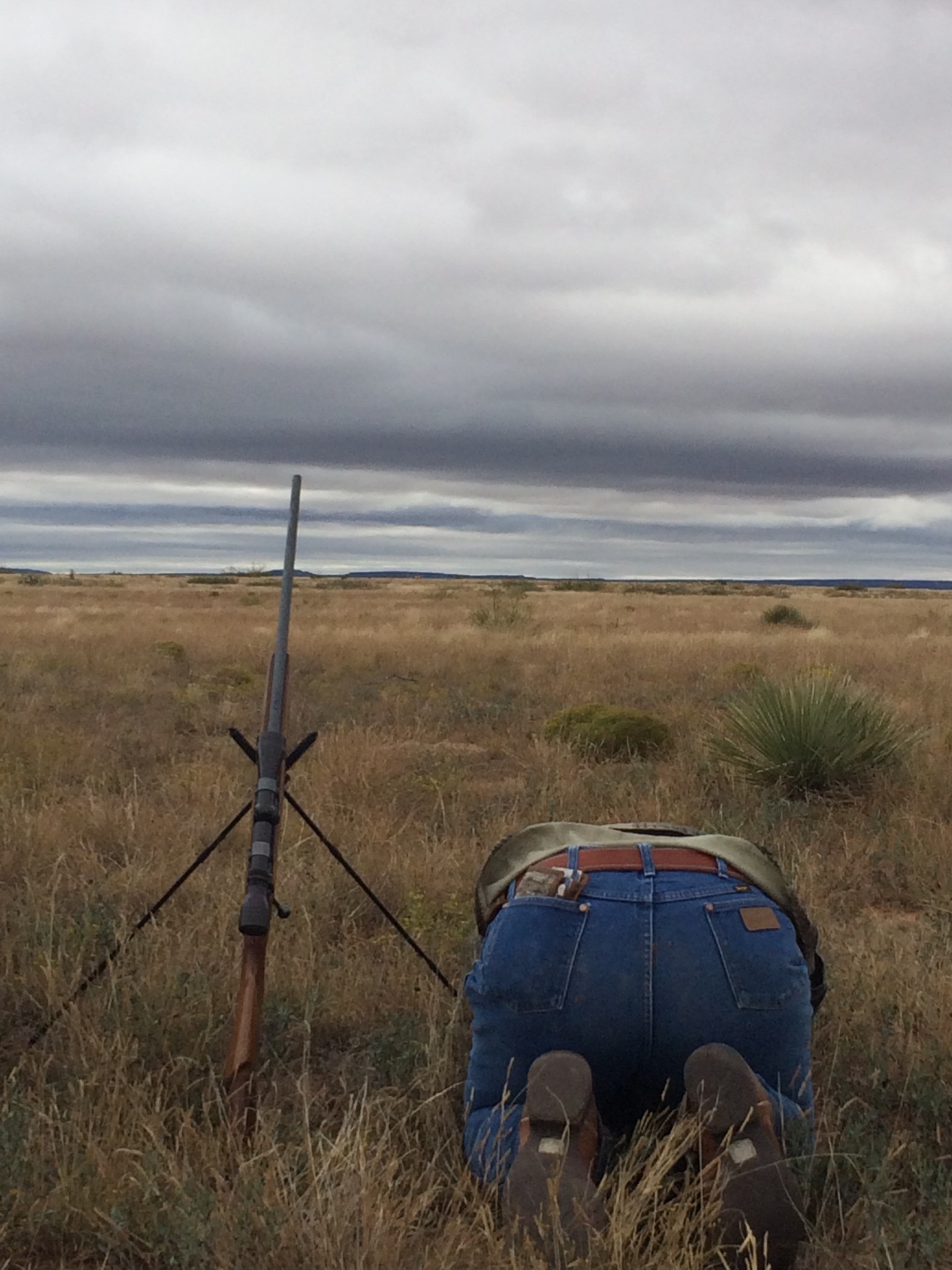 We took pics loaded him up and headed back for the farm house. I was happy for Ronnie and glad it worked out because he was sweating it. Ronnie’s .264 was his grandpas and I wrote a story last winter on this site where I took him out and he killed a whitetail with it and I know it means a lot to him to get to hunt with that gun. 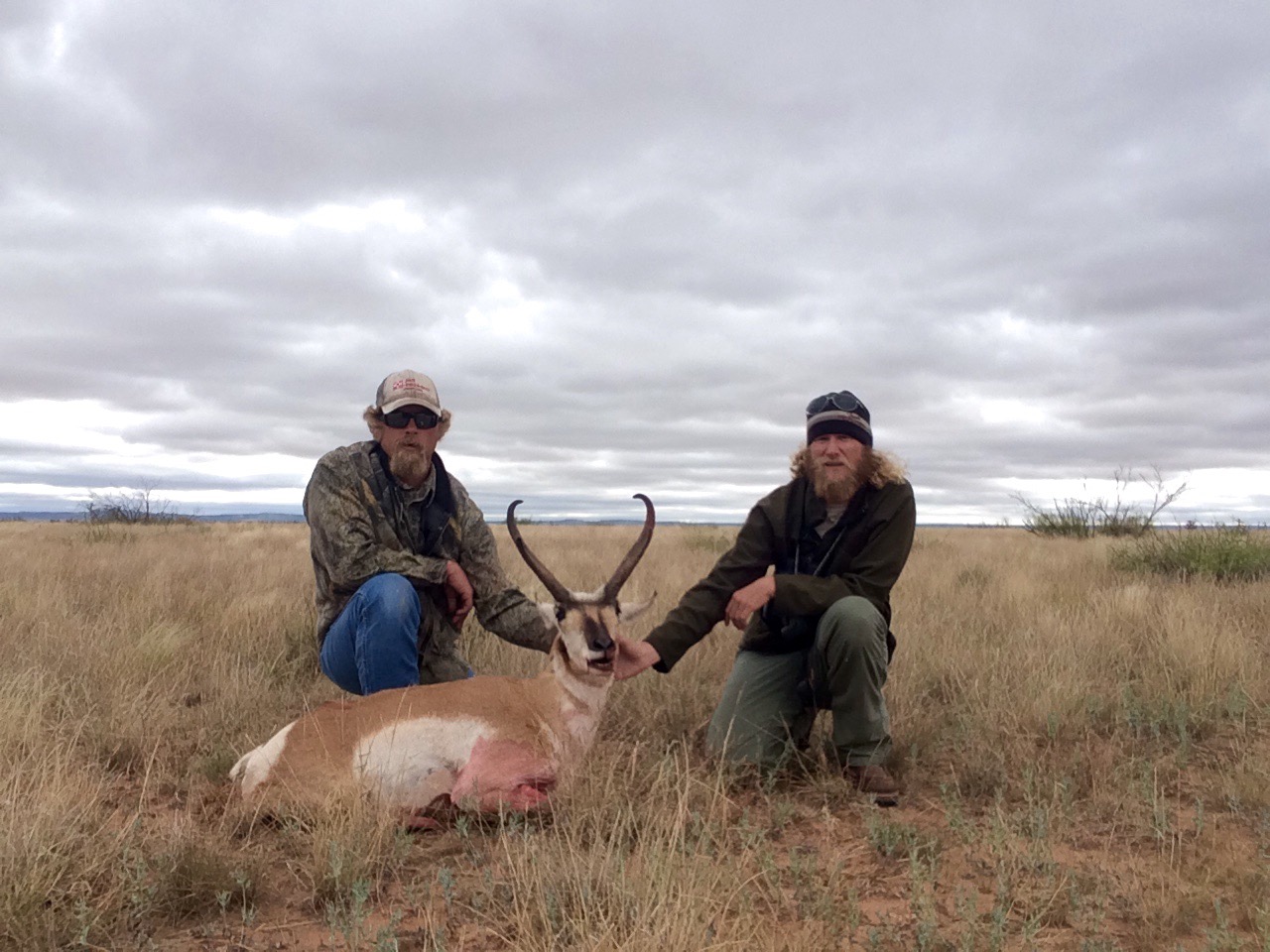 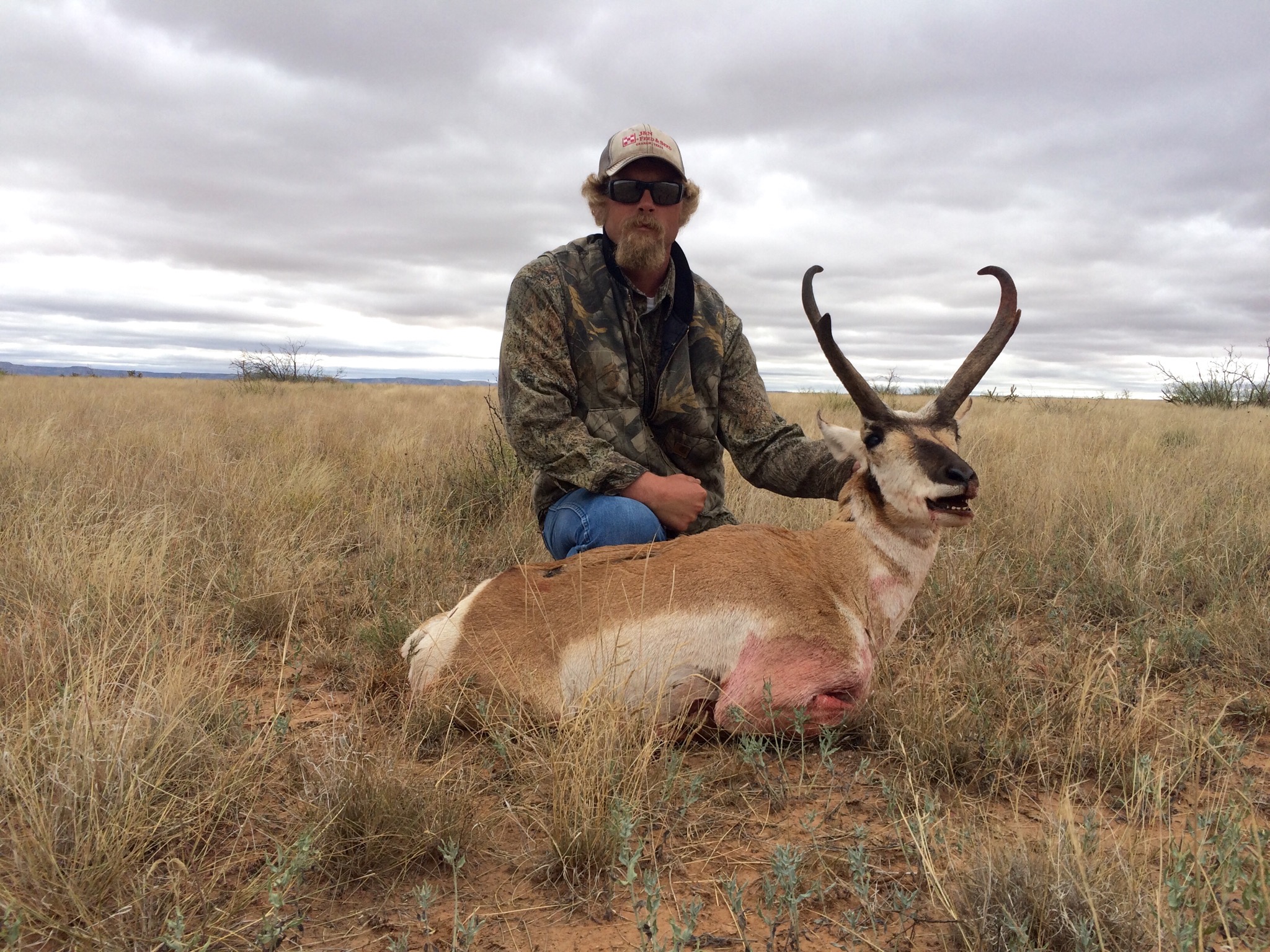 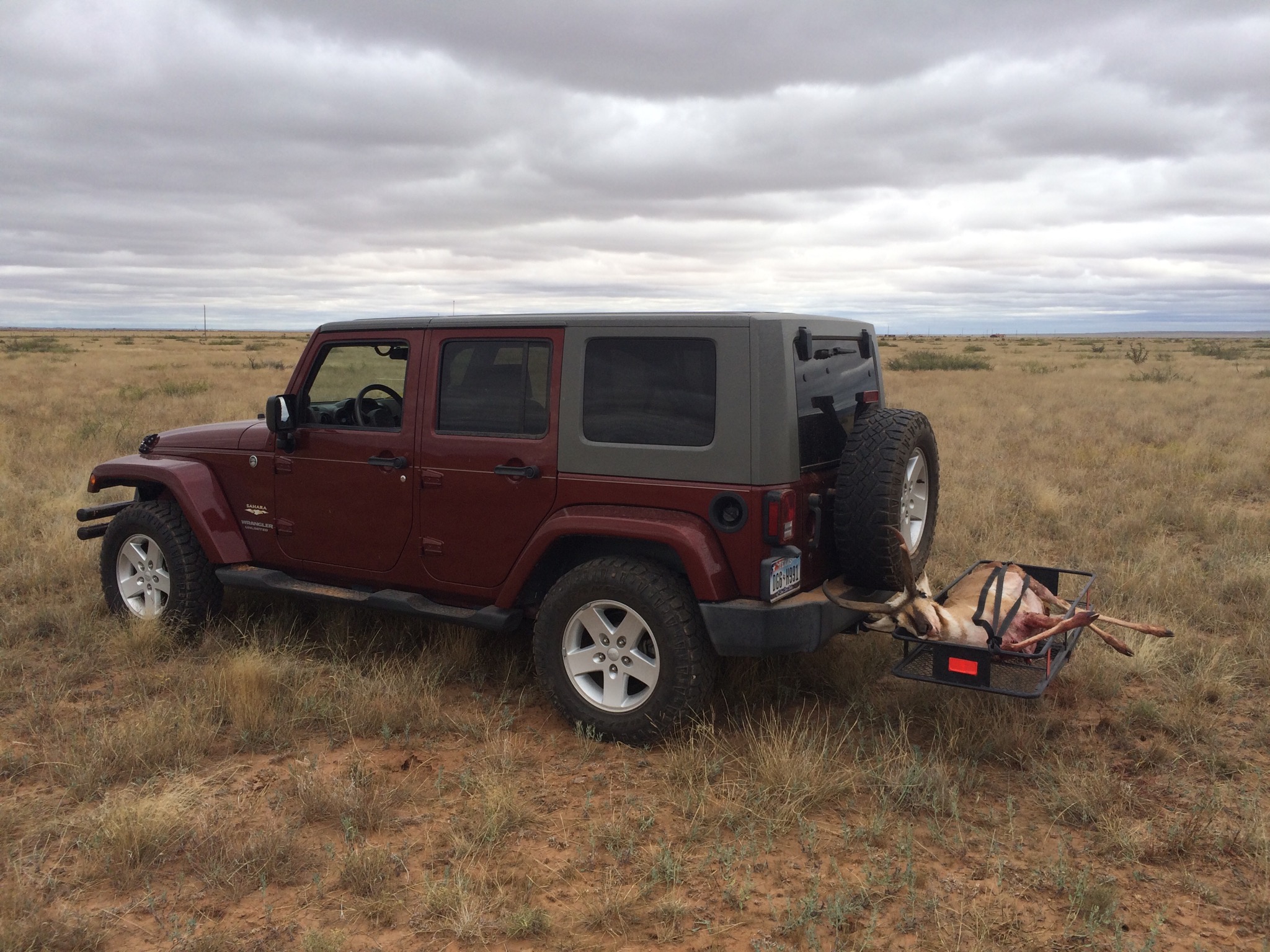 We made short work of the cleaning because it was cold and I was hungry but did share some of our good fortune with Daisy May the farm dog. I couldn’t even get this dog to look at me the day before when I talked to her but today she all the sudden learned to sit and stay and come over when I called her, she’s no dummy she loved some antelope scraps. 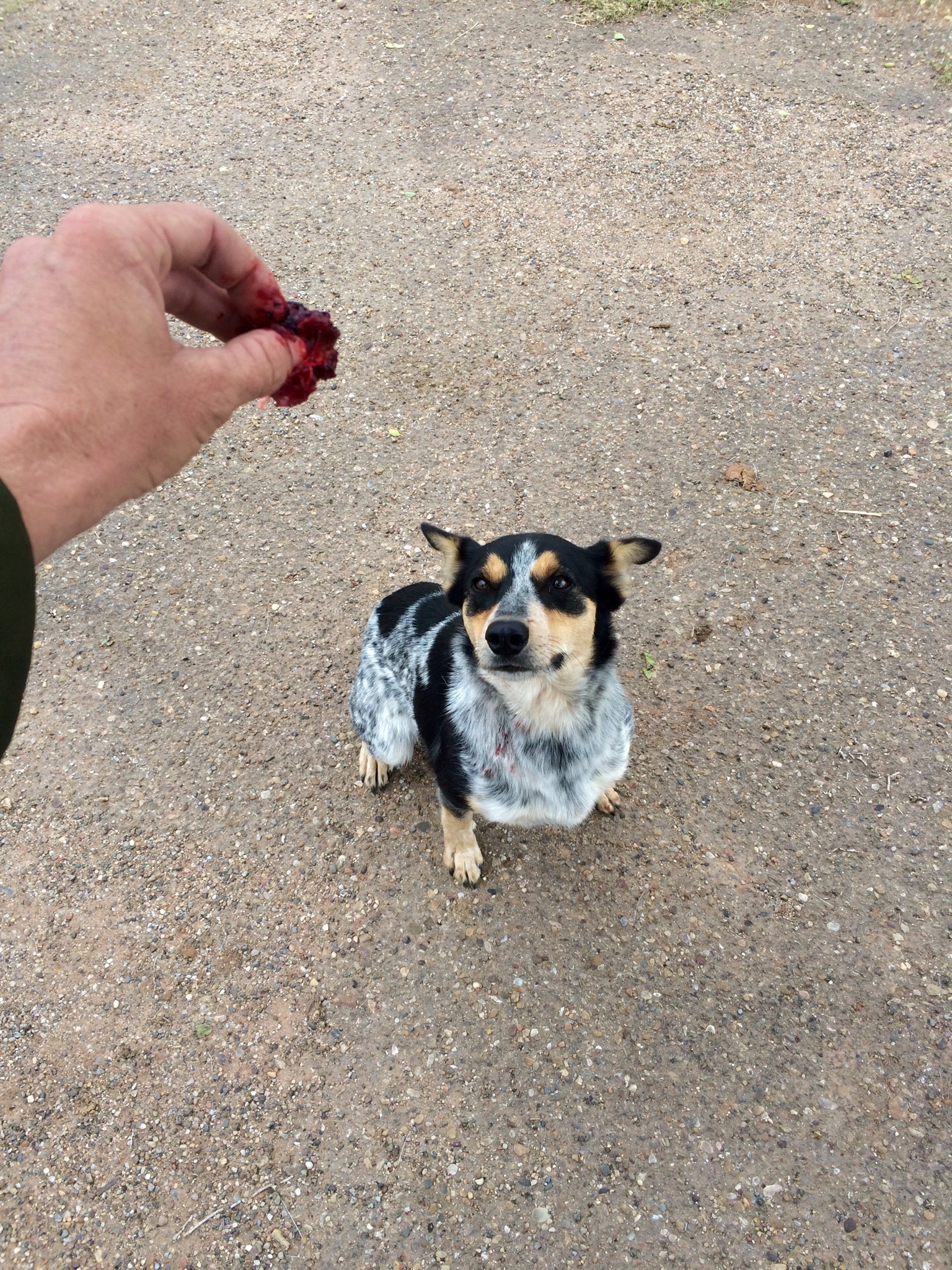 Just as we got cleaned up the report came in Hoss just couldn’t bare the pressure and had to shoot. This guy said he’s not shooting on the first day. He said Im gonna look around, I wanna see all the bucks I can before I shoot because I already have a couple on the wall. I just laughed at the text and said I knew he couldn’t hold back. It’s a great plan and I would like to say the same thing if I had a tag this year but I know better. It’s just too much fun hunting these things and they just make you not wanna pass them up when they are such good looking bucks. I wish I had been there for the hunt to see it and to tell the story but from the sounds of it after several blown stalks and very skittish does running constantly Hoss had this buck stop at 315 yards and made a good shot. That’s two down and I’m one antelope away from trying to break the curse yet again. 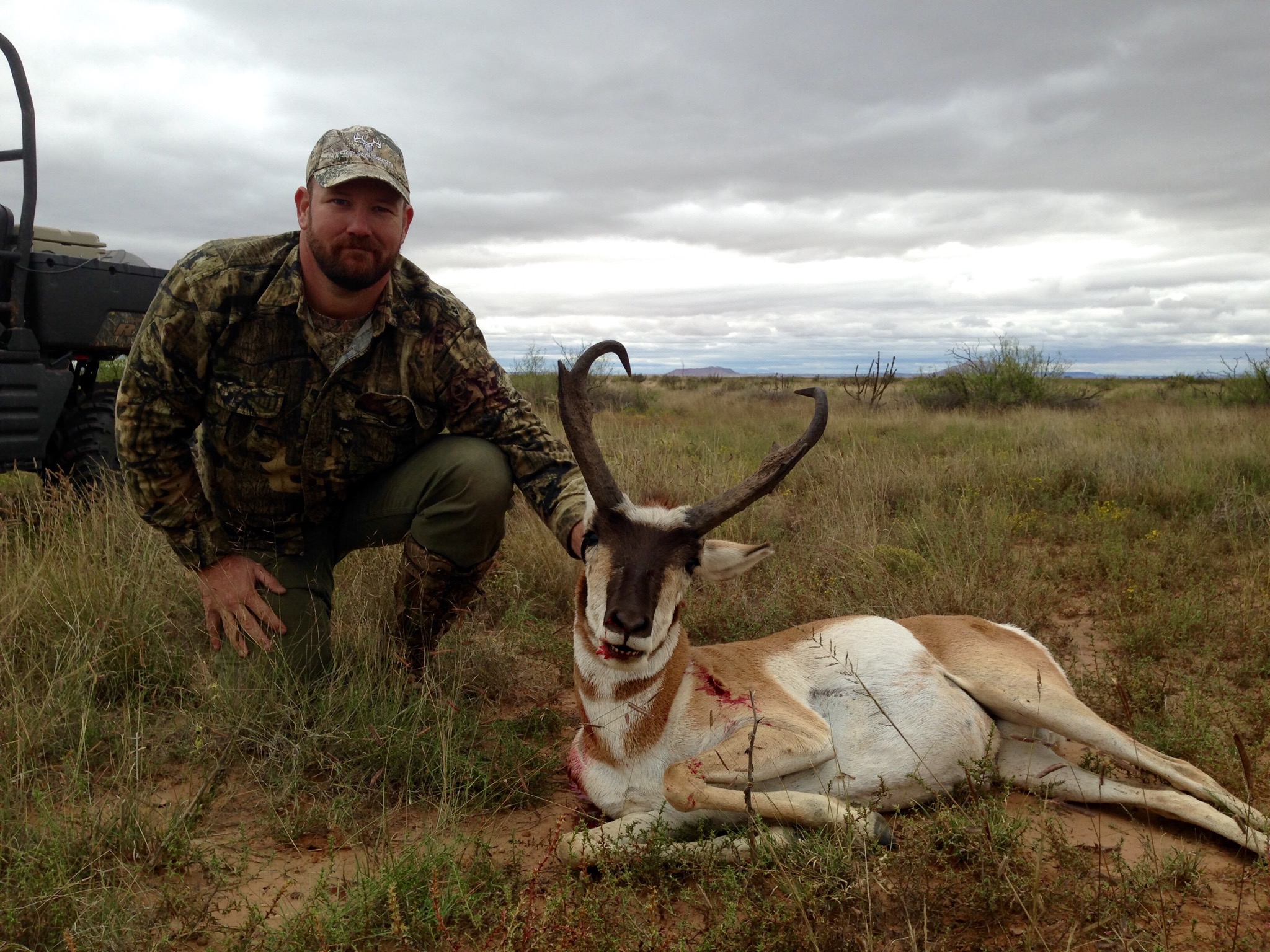 Tomorrow we get Cory’s antelope and sing the dying rabbit blues trying to talk a coyote into a dinner date.