I’m really starting to wonder if curses are real and then I think I’m doing this to myself, it’s all in my head but things happen here that don’t happen to me in other places. I’m not an expert coyote hunter by any means like Ive said before but I’ve killed them in a couple states and by several different means and I usually don’t embarrass myself in any hunting situation but I’m getting beat badly once again.
We started out in a rain delay but that’s ok this land and these people need it in a bad way and who am I to complain that it cost me a couple hours of a hunt when they haven’t seen a decent amount of water in years. 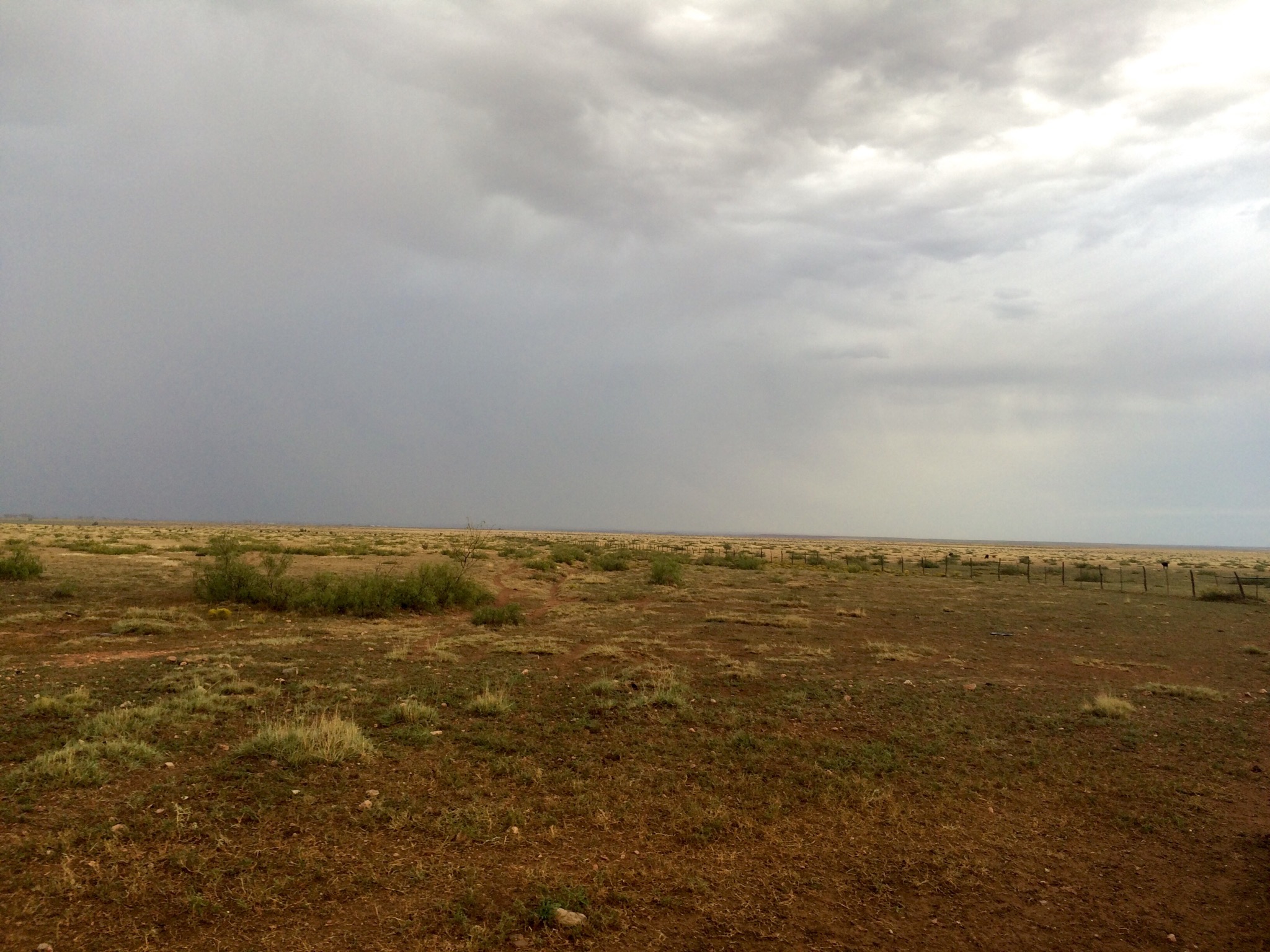 Gearing up for the first coyote stand of 2014 and it’s perfect. Cool with very slight breeze and wet conditions. 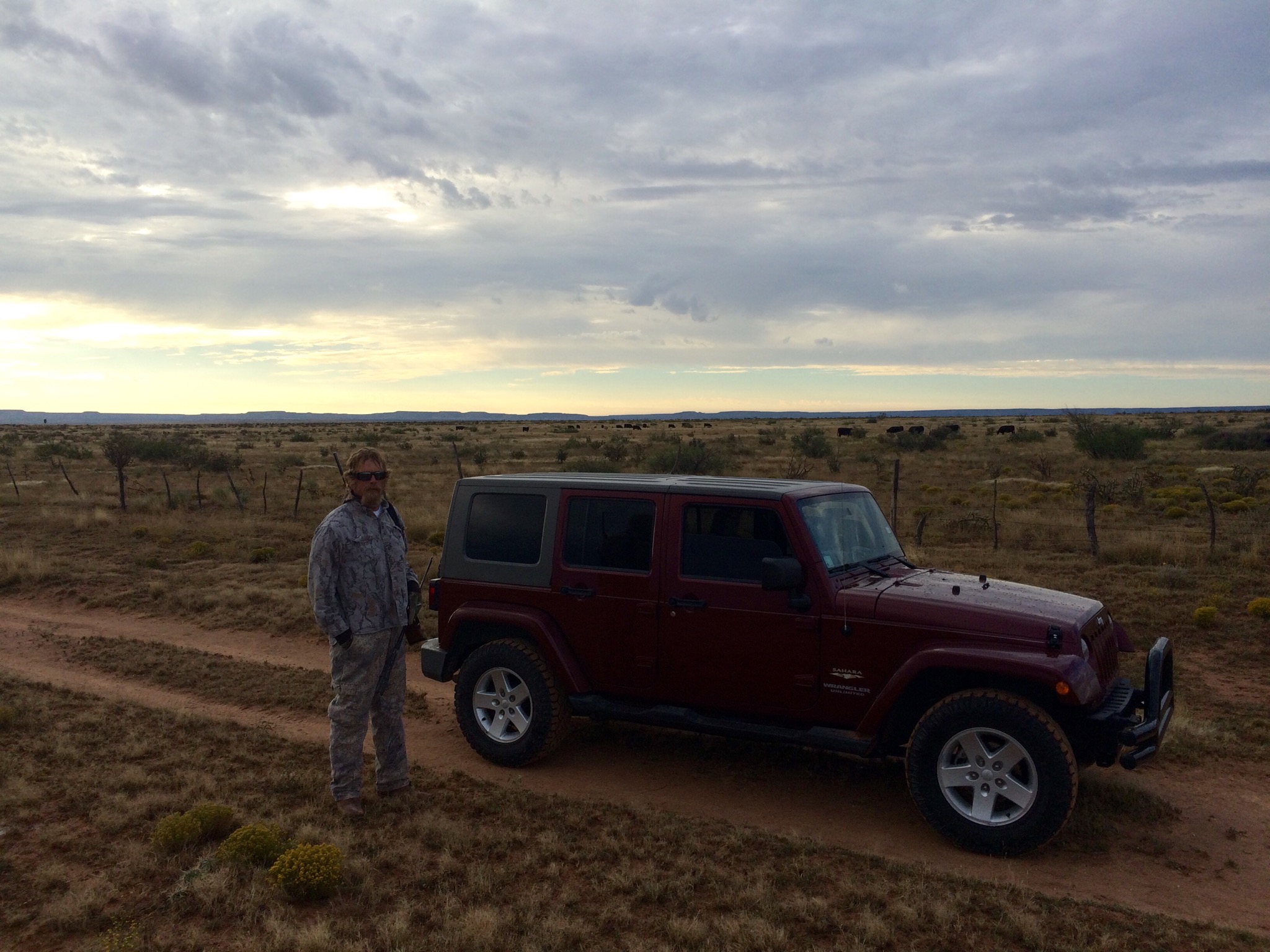 First spot was one of my favorites, we always call at least one and today would be no different. About seven minutes in I catch movement to my left so I swing on him as he goes behind a cholla cactus at about 120 yards, he don’t even know he’s dead yet, wrong! I put cross hairs on is chest just as Ronnie shoots and my dog is out like the devil himself is chasing him. I assumed Ronnie had shot one I couldn’t see so I swing out in front of mine at 200 yards quartering away and shoot just in front of him. I stand to look at Ronnie expecting a big thumbs up but all I see is his him with his hands over his face, that’s a bad sign.
I got over and he said three came in but two got by him before he got on them and the lead was the one I seen. Somehow in what sounded like a comedy of errors he knocked over his shooting sticks, got caught moving by one of them and pulled the shot at 50 yards. I don’t know how exactly it all went down but Ive been in his shoes and it’s not really something you wanna go on and on about so outside of a little ribbing I left for the next spot wondering why couldn’t my coyote have stopped sooner or later or why couldn’t it had been one coyote so Ronnie didn’t get seen moving then I realized it had to be the curse.
Stand two was a mile away but down in a low grass flat with thicker cactus on both sides. The wind would be blowing our scent straight into the flat which in most places where I can actually kill coyotes would be perfect. The coyotes will always circle down wind and that would draw them into that flat and theoretically we would shoot before they got straight down wind and they would be laying in piles in the open grass. How could this go wrong? Well I’ll tell you how, two minutes in the first “victim” shows up bouncing out of the thick stuff toward the flat just like I knew he would, this is so easy I should make a tv show about it. Well, either I stink worse than I thought or the wind shifted some because before he fully cleared the brush it looked like he hit a wall and he turned inside out. Great, there went my whole theory on that. This actually changed my whole set up because I could not see the area that was not down wind real good. I turned about 45 degrees left and hoped for the best.
The dying rabbit blues sang on until about the 12 minute mark and I figured I had stunk up the place but remembered in the past when I’ve used the sound of another coyote that they will often give you their wind thinking they are coming into a neighboring coyote and want said neighbor to know who’s coming, that’s my thought anyway. I reached down changed the sound to coyote pups and a ball of hair blew out from a patch of mesquite at 100 miles per hour headed for Amarillo, that’s bad because I’m facing Amarillo. Had I not changed sounds he was coming to the rabbit but I didn’t see him and for whatever reason he wanted no part of a family of puppies and he was gone. I took the customary 200 yard running shot but hit just left, stupid curse. It was at that point I realized I’m trying to hard Im over thinking this, coyotes are coming to the call just sit down do what you always do, stop worrying about it and kill coyotes. That’s just what I did, except the killing part. Next stand was sketchy at best, as the sun had broke out and the wind was swirling, after 15 minutes we had no takers so I called it off and went for lunch. 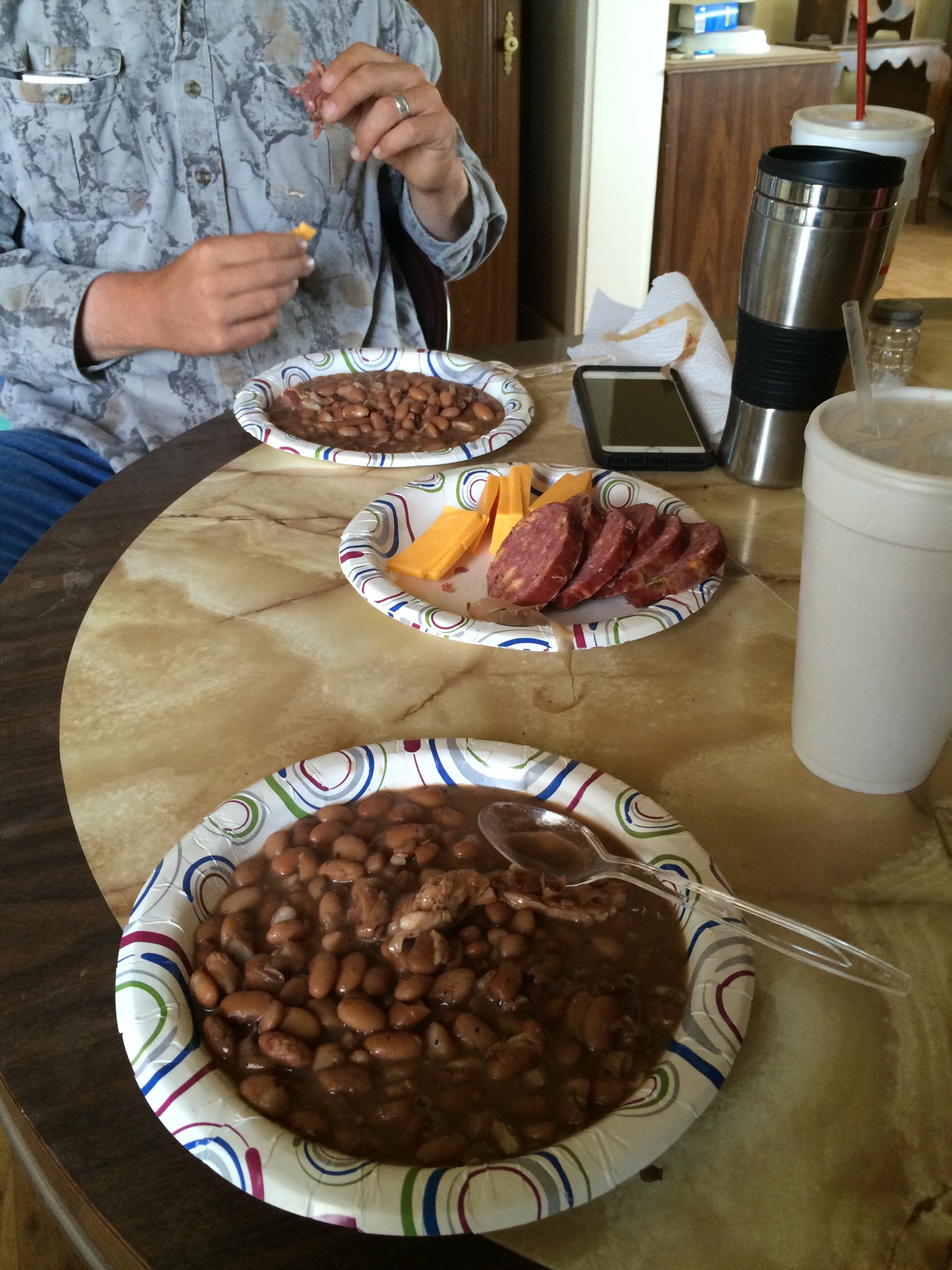 The second half of the crew arrived just after lunch and we split up to look for antelope. Season starts tomorrow and I wanted to have a look at some to get an idea of what was around this year. We did see several good bucks and I feel pretty confident that we will fill all three tags.
The weather has been weird this trip with big clouds blowing in and out and 40 degree temperature swings. This big cloud was beautiful as long as it stayed on its own side of the pasture. 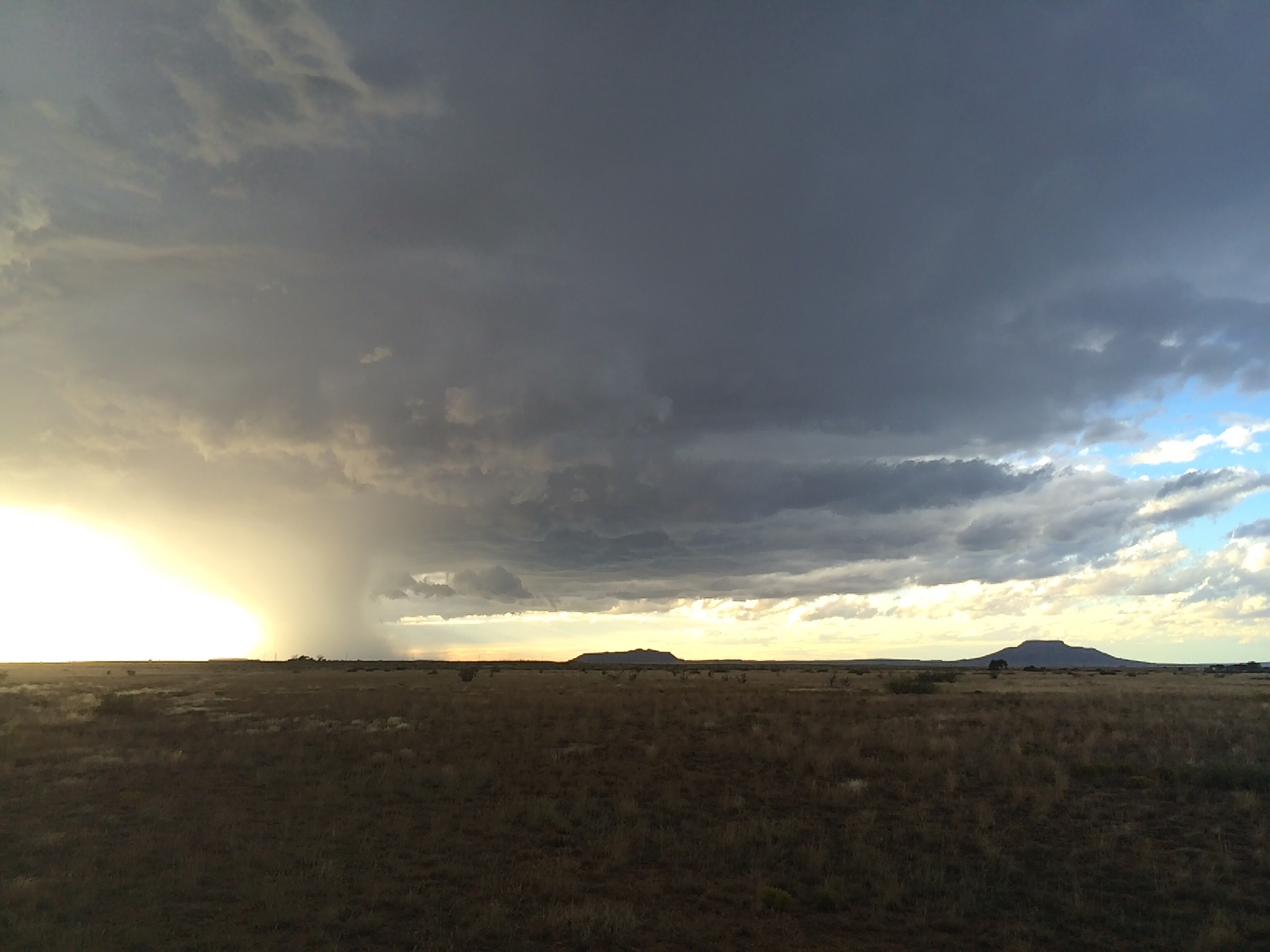 I’m always amazed at the amount of critters we find, big ones, small ones, dangerous ones and harmless ones they are all here and in numbers. This does not seem like a real inhabitable place but lots of things make their home here.
This is a crazy grasshopper that we just called a calico. I have no clue what it really is and have never seen one anywhere else. 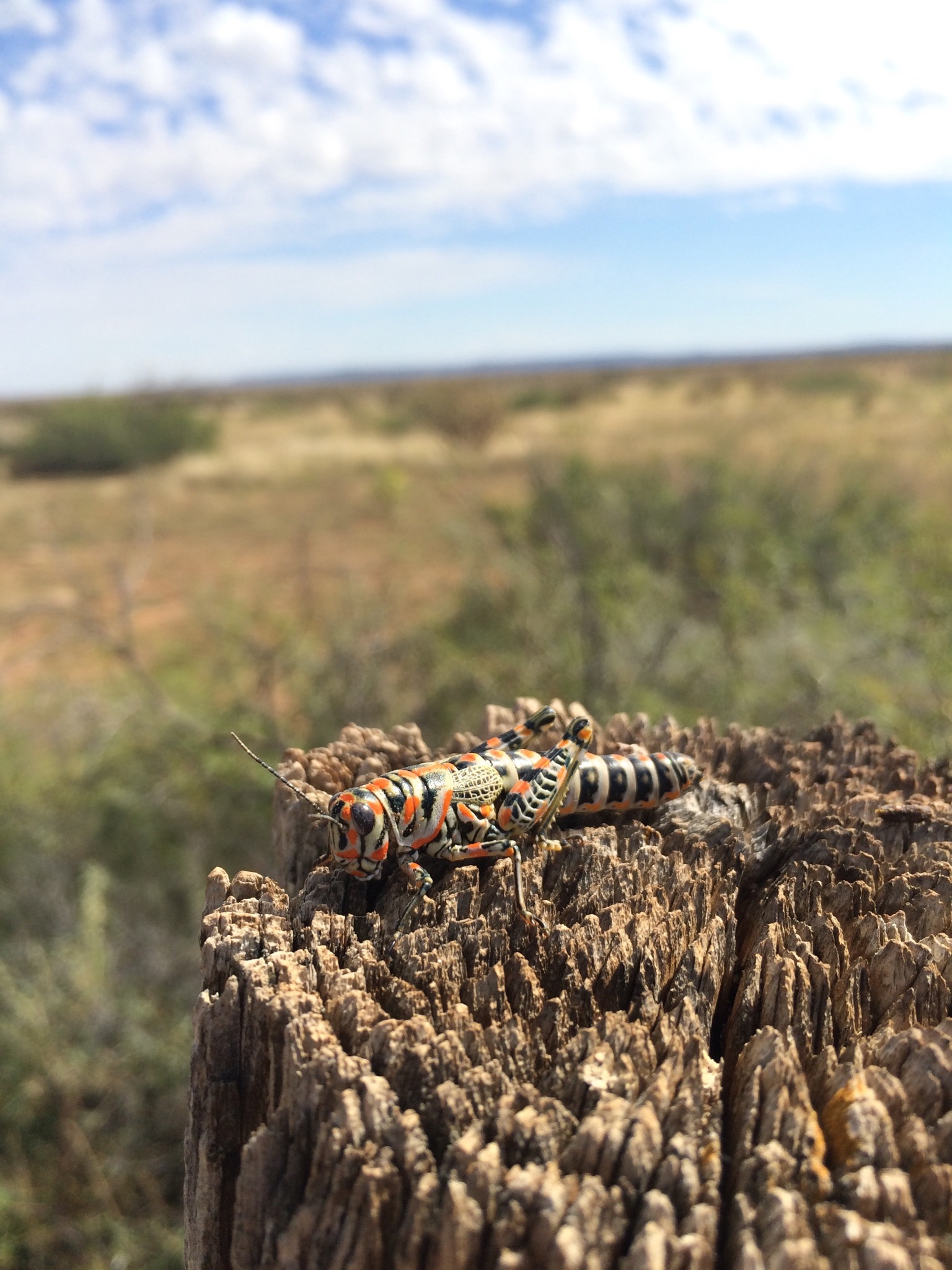 I seen something run across the road that I could not identify so I slid to a halt jumped out of the Jeep and did what you should do, I cornered it and picked it up. That’s what I do anyway but any kids reading this don’t do it, have your dad do it and if he don’t you call him a wimp and tell him Uncle Chris does it. I’ve always been a chaser and gatherer of living animals, I just wanna hold them and admire them, unless their eatable then I wanna taste them. This guy here obviously thought I was gonna eat him because he was none too happy that I had him by his whisker, or antenna I guess. Whatever it was he wanted out and did his best to pinch me with some pretty impressive pinchers. He didn’t have a stinger that I could tell and I don’t think centipedes sting but Im not sure. 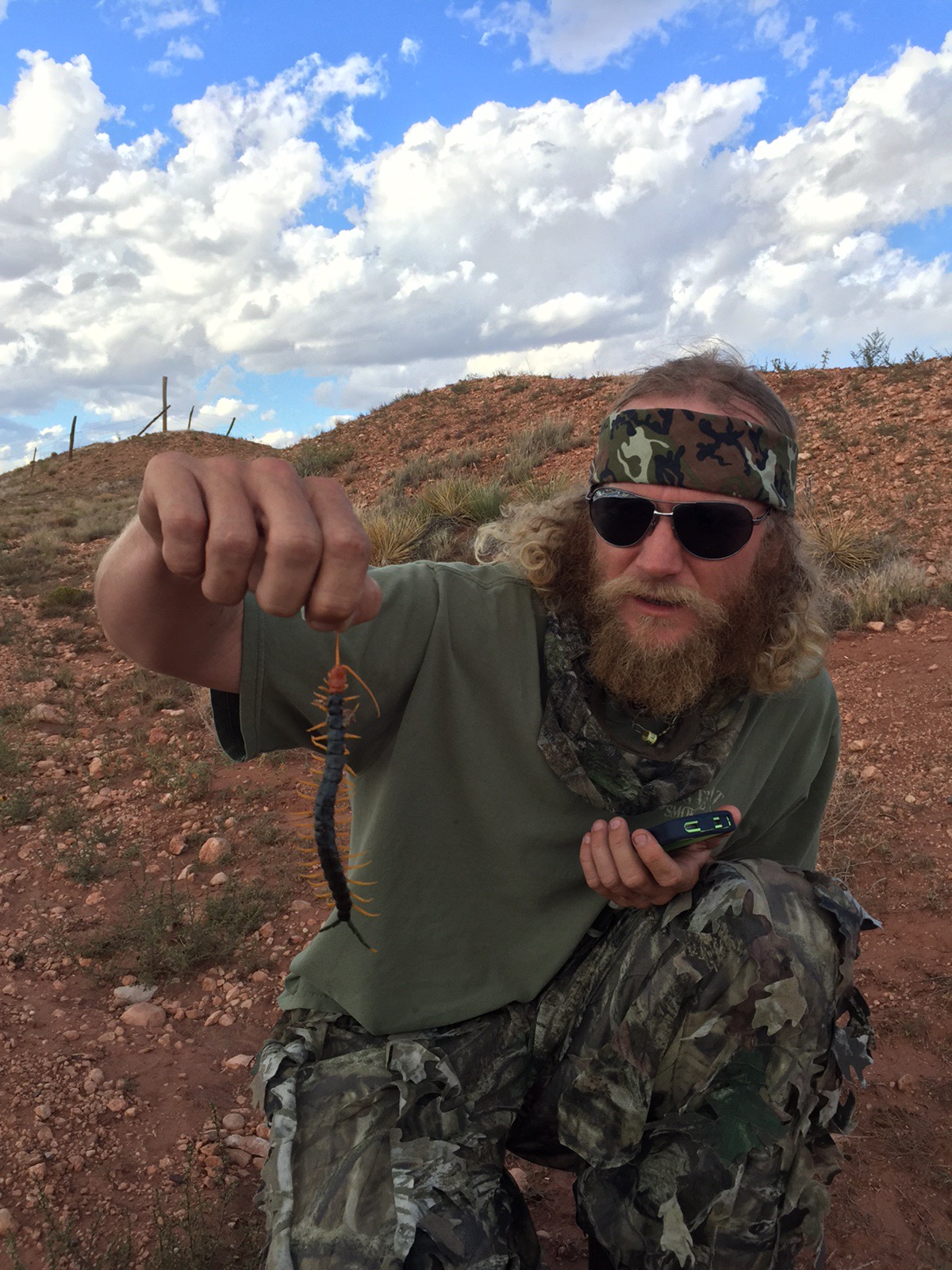 The sun was setting on another New Mexico day and overall it was a good one, except for the coyotes of course. When I do, not if, but when I finally do kill one it will be mounted and every time I walk by and look at it I will know he’s the one that broke the curse.
On the way back to the farm house another big cloud blew in and treated us to this sight. Now I know I’ve already posted a picture of a cat and now I’m admiring rainbows, double rainbows actually, but I’ve never seen both ends of a single rainbow appear to touch the ground and I wanted a pic of it. I promise I’m not getting soft, maybe older, but not soft and next story I promise there will be a successful hunt and I won’t post rainbows. 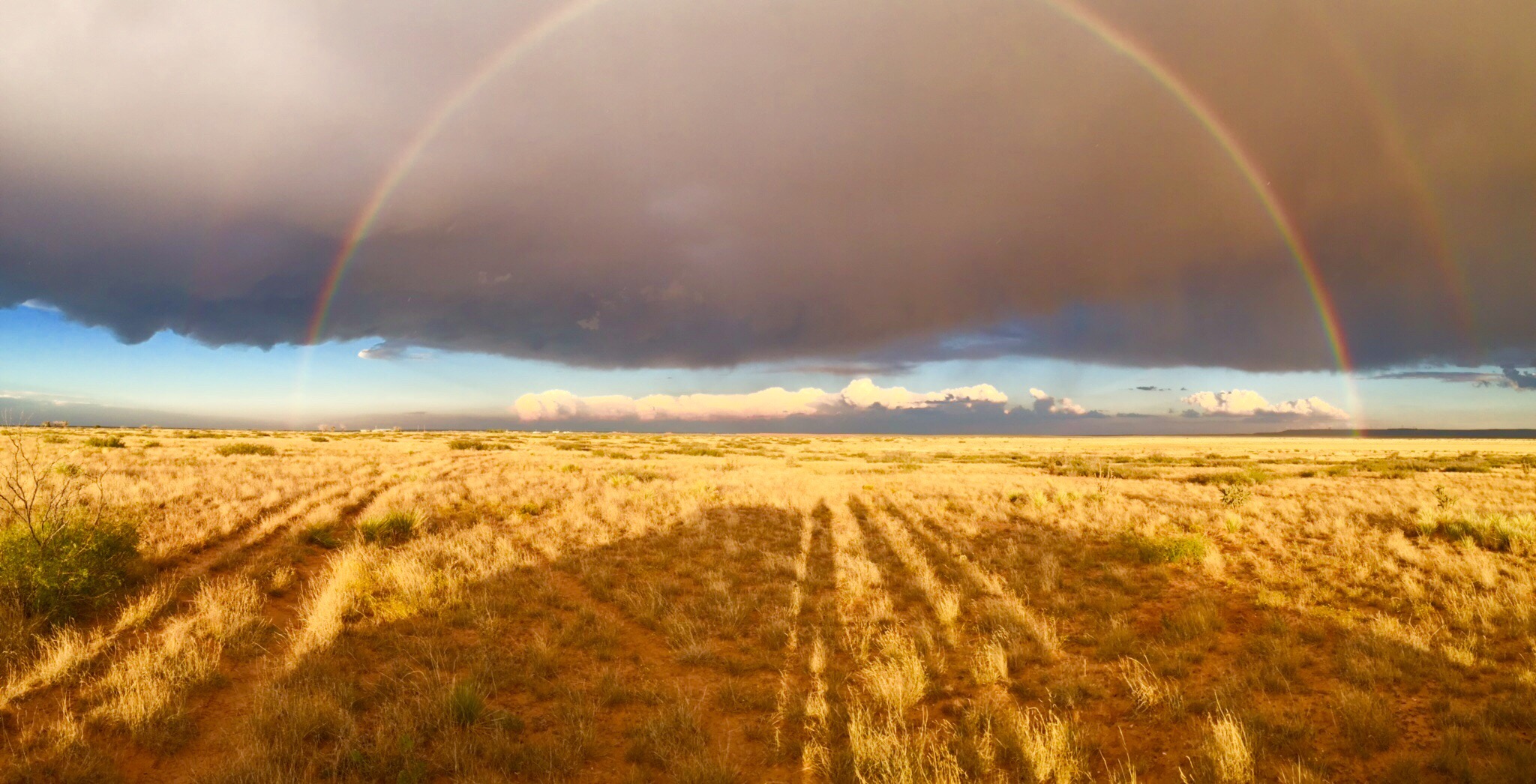