Archery Opener: Not what I had in mind

Last year’s deer season was one of the worst we’ve had in some time so I was determined to make this year better. I spent the summer working on stands and feeders, cutting trees and all the things that need doing to be ready for the archery opener but “Cook Luck” showed up and the bad season continues.
My dad always said he had bad luck and passed it on and that’s the “Cook Luck” and I’m starting to believe there’s something to this. Things just happen to me regularly that don’t happen to most people but I just keep going, what else are gonna do.
I blame this current bad streak on a rebellious gall bladder that decided it didn’t want to be a part of Mary Ann’s inner workings and had to be removed. We stayed the better part of a week in the hospital where I slept in a chair that was ice cold. Then a week later her dad got sick and we spent the next week visiting Illinois. Shortly after our return we had a truck go down that cost a substantial amount to fix and then again a week later for the second time in a week and my life I had to call a tow truck because my Land Cruiser went down. I could not be more ready for deer season so I could just sit in a tree and hope it didn’t fall for no apparent reason while I was in it.
After a late start we finally got to camp and as I always do I listened to high school football on the radio and sat by the fire. The Friday night before the opener may be my favorite night of the year. The deer haven’t been hunted in months and are usually on a steady pattern and I feel like easier to hunt, high school football has started, and its the sign of a new season, I love it. We got to bed late but I was ready to go well before light.
Alex took his position in a box stand we call “Hoot Owl” and I was 16′ up in a tree at “Ward’s Stand”. Nice cool morning with slight wind and still woods its everything I wanted until I turned to check the time on my phone and directly behind me 20 yards out was a doe feeding. I’ve never seen deer come from this area and knew a shot would be near impossible but I did my best to contort around the tree and balance off the side of the stand while ranging the deer. It was 28 yards, nothing I haven’t done 100 times before but of course she stopped behind a tree and I had very narrow vital area to shoot at. I was so worried about hitting the tree I pulled the shot. I missed the tree by a foot but I also missed the deer by an inch. Oh well it happens, at least it was a clean miss.
I had to go to town to pick up my Cruiser that I had towed in and replace some parts on it. The part was easy but the Cruiser battery was dead, not a big deal but just one more thing. That being done we headed back to woods where we found one feeder not working and one broke from its hanger. Again not a big deal but I’m getting frustrated because I worked so hard to get things going for the season.
Saturday afternoon hunt I only had a small buck come in and Alex had some cows. Cows are bad because we don’t have any cows on this place.
We hunted Sunday morning and didn’t see much but cows so its time to do some cowboying. I only like cows one way and that’s over a fire. I hate these things so bad, I know its not their fault that they are dumb but they can tear up more stuff than any critter I’ve ever seen. I’m not cut out to be a cowboy but after they got into my food plot and knocked a stand down I had to get them out. By now I had gathered a little help and we started out herding them toward the place in the fence they broke to get in. Two hours later they were out but I was bleeding and covered in poison Ivey and my hatred for these walking
T-bones had grown even more. I fixed the hole in the fence, and had a ladder to hang and the work for the weekend would be over.
My ladder was a throw together with scrap parts to get me by until a permanent fix could be made. It wasn’t pretty but functional and wouldn’t you know it, on the way to the stand as it hung out the back of the Ranger I hung it on a tree and snapped it right in two. 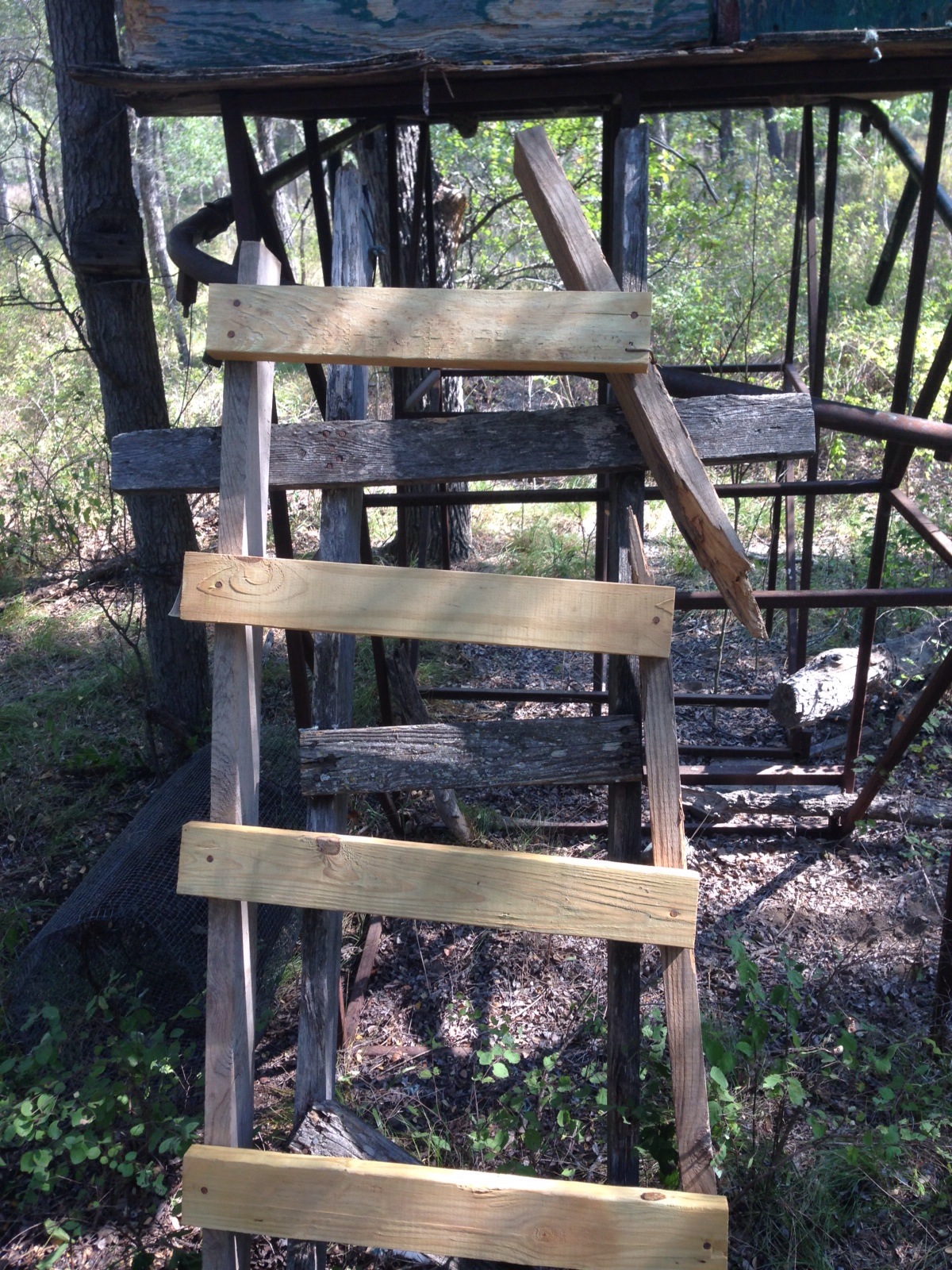 That’s it I’m done. My nephew Landry had a 7th birthday party at the bowling alley so we would try our luck there.
I know that’s the worst hunting story ever but that’s the way it goes sometimes so if you wanted a hunting story I’m sorry. The rest of this will be about how I suck at bowling but am real good at eating cheeseburgers if you care to continue.
A few months back my brother had mentioned that his two boys were sharing a bike right now. I thought this has to be fixed, a boy needs his own bike, its his first taste of freedom, the first time he gets to make his own decisions about how he will drive and how far and how fast, its greatness, plus you can’t ride bikes with your brother if he’s not there because he’s waiting his turn at home. I could just go buy a bike but anybody could do that I need my bike to be different and better so when I came across a bike in a junk pile that seemed fairly usable I picked it up. I took it home and stripped it down and cleaned and painted it, I shined the chrome and tires, I fixed the bearings and put new grease in them and bought some new grips, found a nice seat and some cool stickers and in short order I had a pretty cool Harley themed bike that I know no other kid has. No other kid may want one now that I think about it but either way Landry had a new bike that nobody else had and now he will know the freedom of the wind in his hair. Well for about 15 feet he will, he’s still learning without training wheels but he has a damn cool bike to learn on. 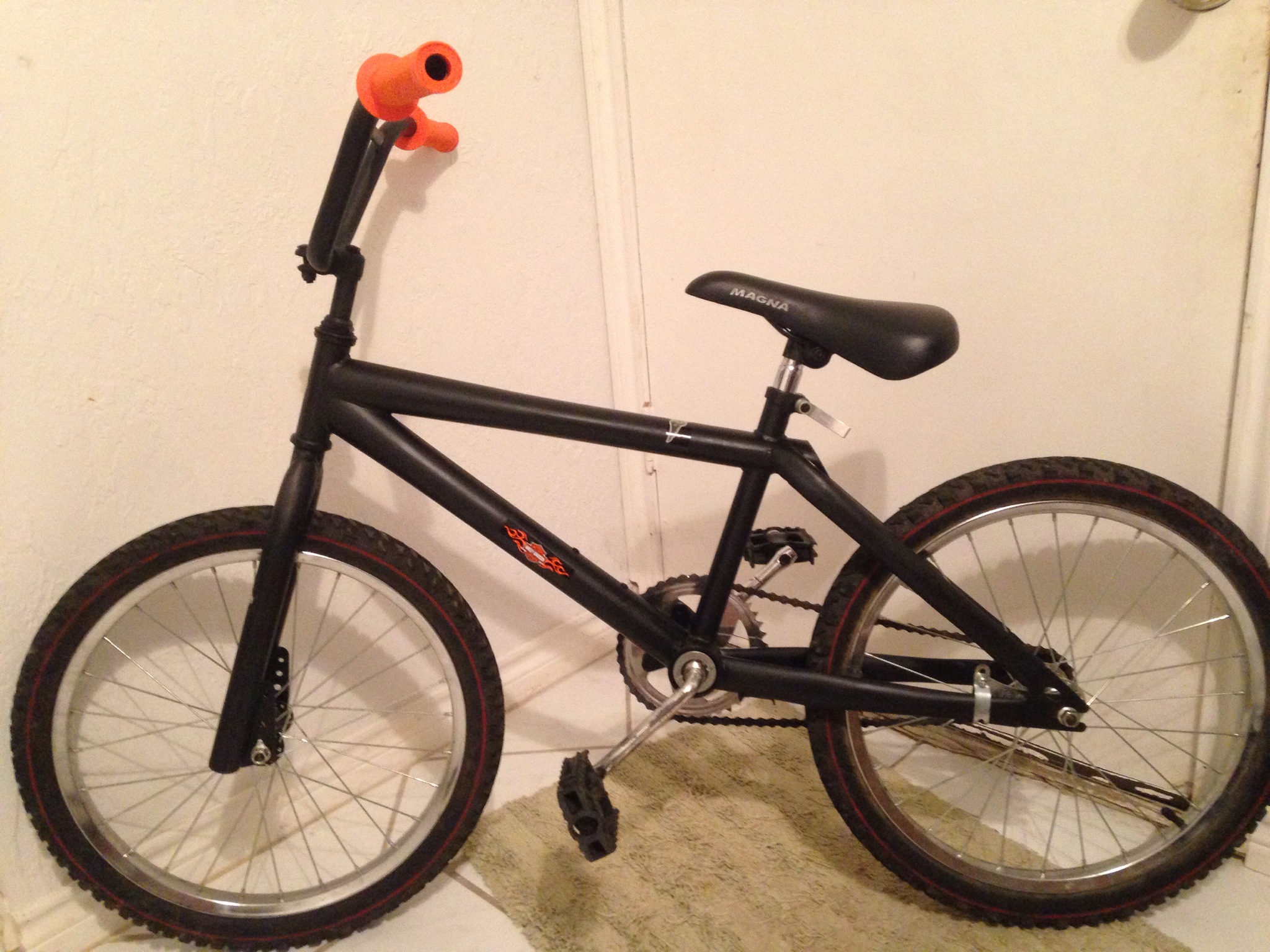 Landry liked the bike and I like cup cakes and ice cream so this party was a success already. Now about the bowling, myself and Nate and Jarod, my two brothers, ended up together and you would think there would be huge competition and smack talking but when you all suck as bad as we do the winner is really just the guy that sucks the least so not much to brag about. 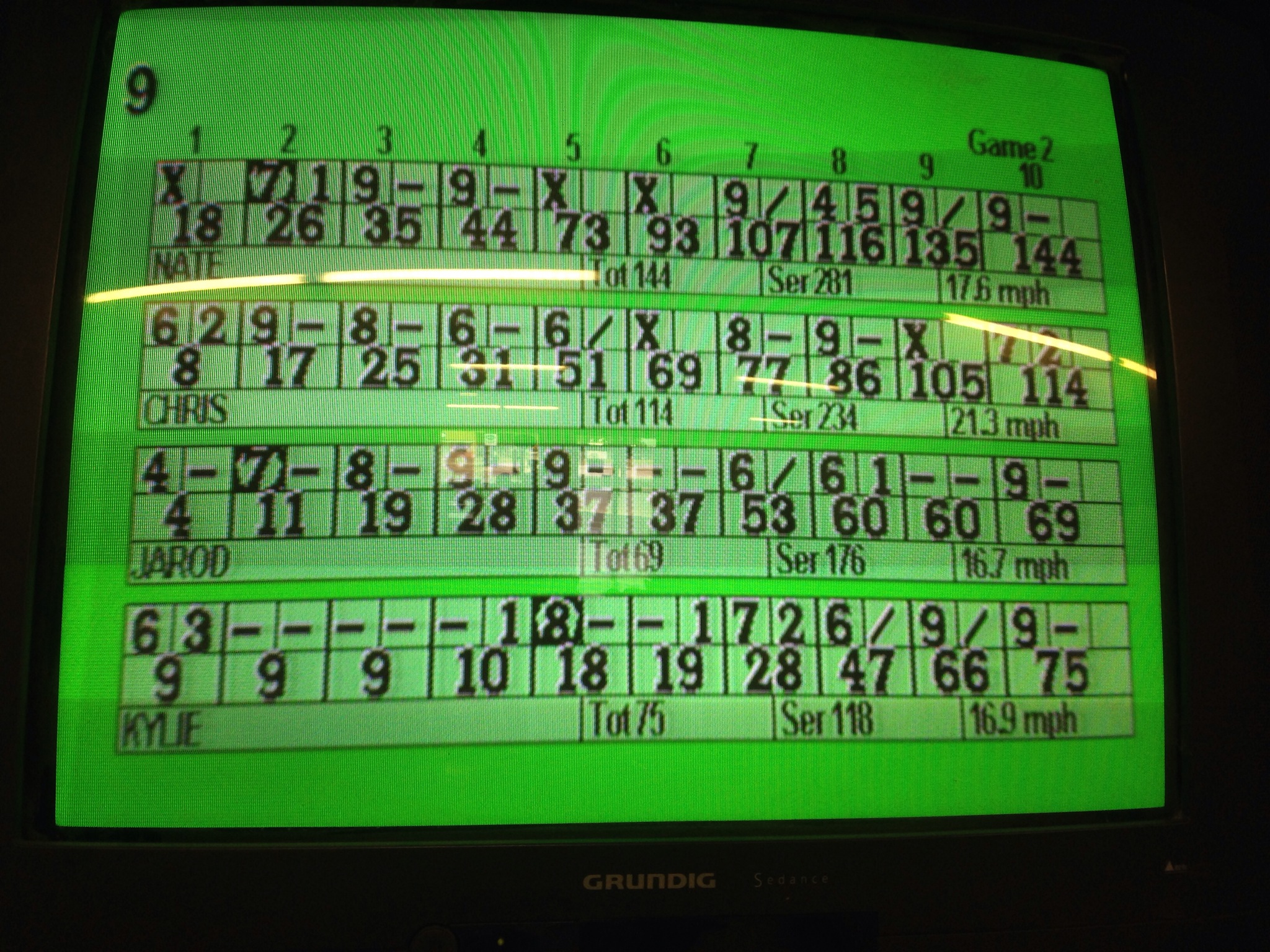 The kids had fun and I hope they didn’t take any pointers from their dads and uncles on bowling. 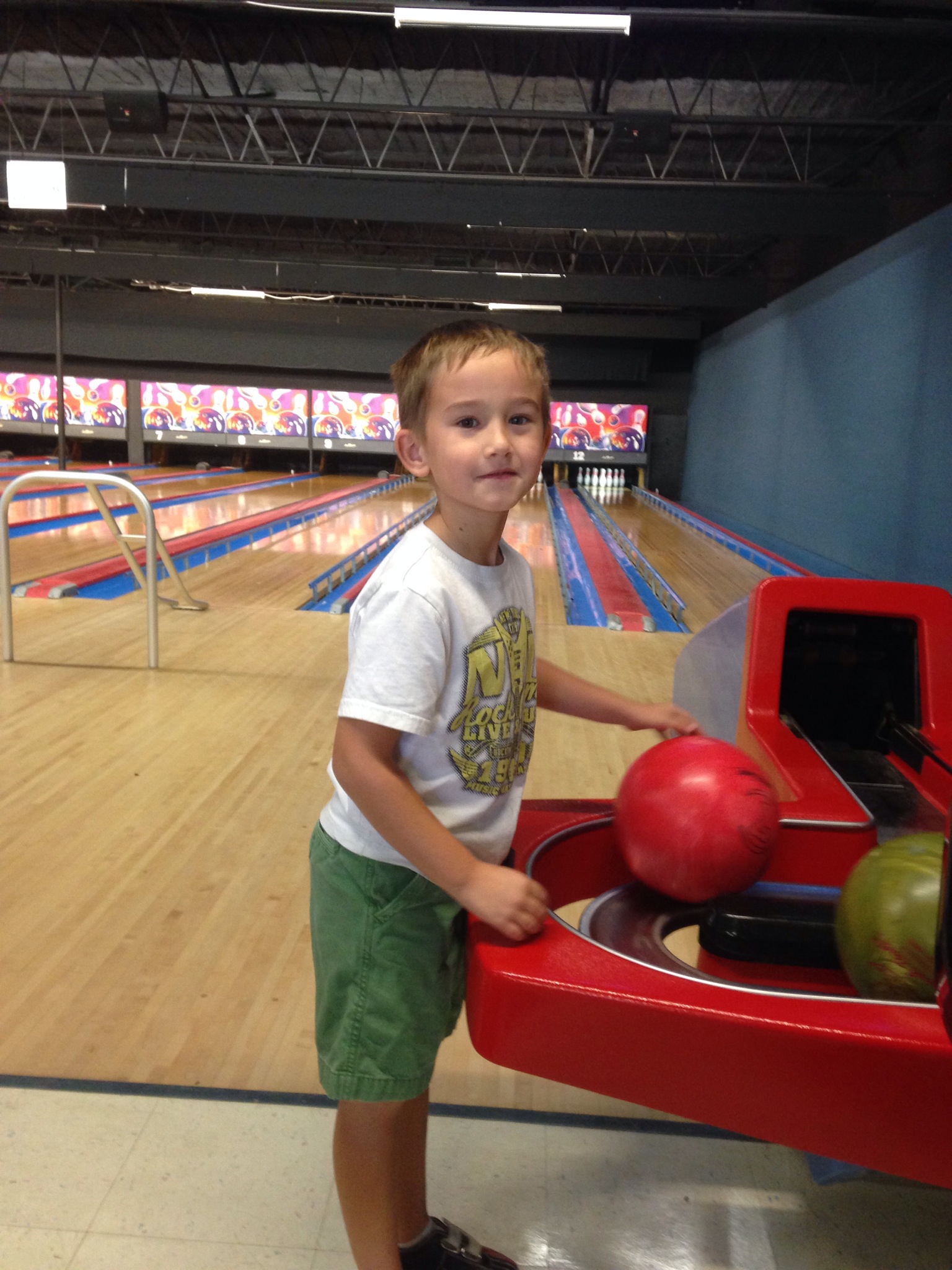 Now that we all agree we can’t bowl I needed to do what it is I am good at and that’s knock down some greasy food. This was the Steer Bowl in Graham Texas and I was impressed with burger. It was good size patty and tons of bacon, I may stop again just to eat and see if I can pick up some bowling tips so next time we have a party there I will be ready. 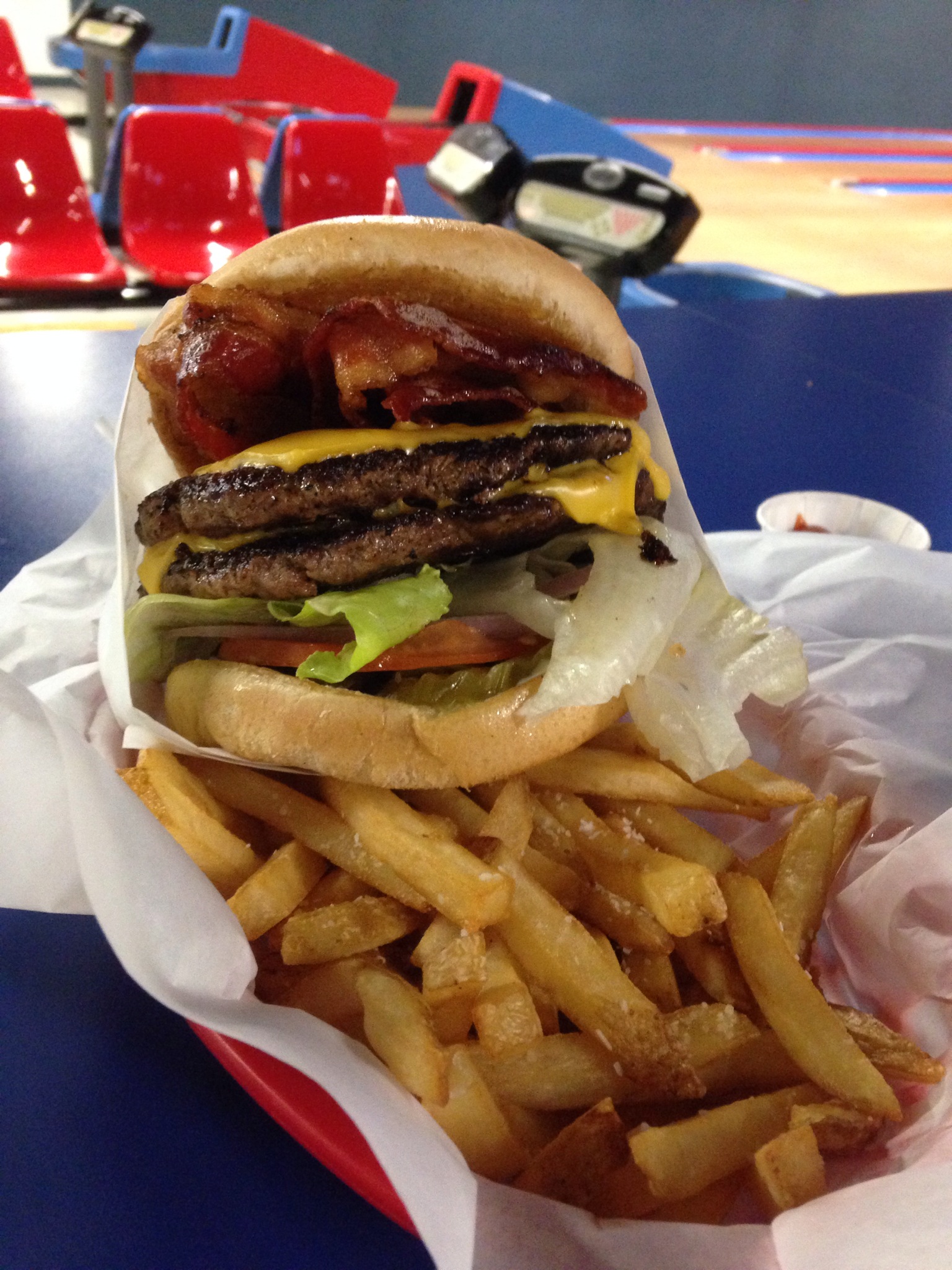 Its not the weekend I had in mind but we got some happy kids with new bikes and for the time being all my vehicles are back in order.
Pictures like this are what will keep me going and again and again, Alex will remember times like this for ever. I made fried potatoes and sausage at camp one night and Alex was heating up the tortillas. 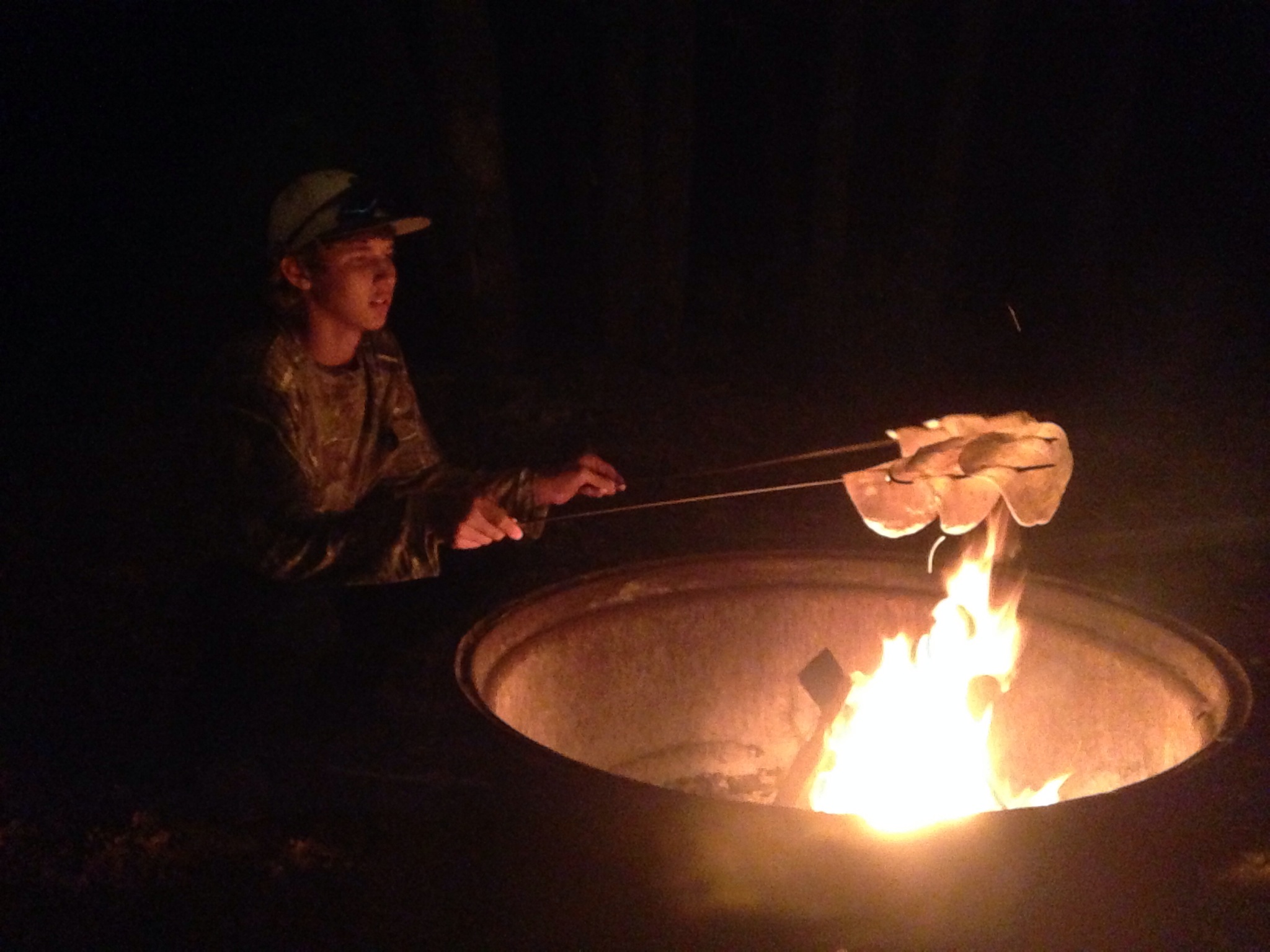