Its not all fun and game

Hunting all winter is fun but all the work that goes into it to be ready for winter is not. Its never hard to find somebody to tag along on a nice cool evening when its time to look for some hogs but when its 102 degrees and things need fixed its seems your list of hunting buddies dwindles. I do get help on occasions but this time I’m on my own and there’s work enough for five guys for a week so I will just plug away and stop when I get tired. 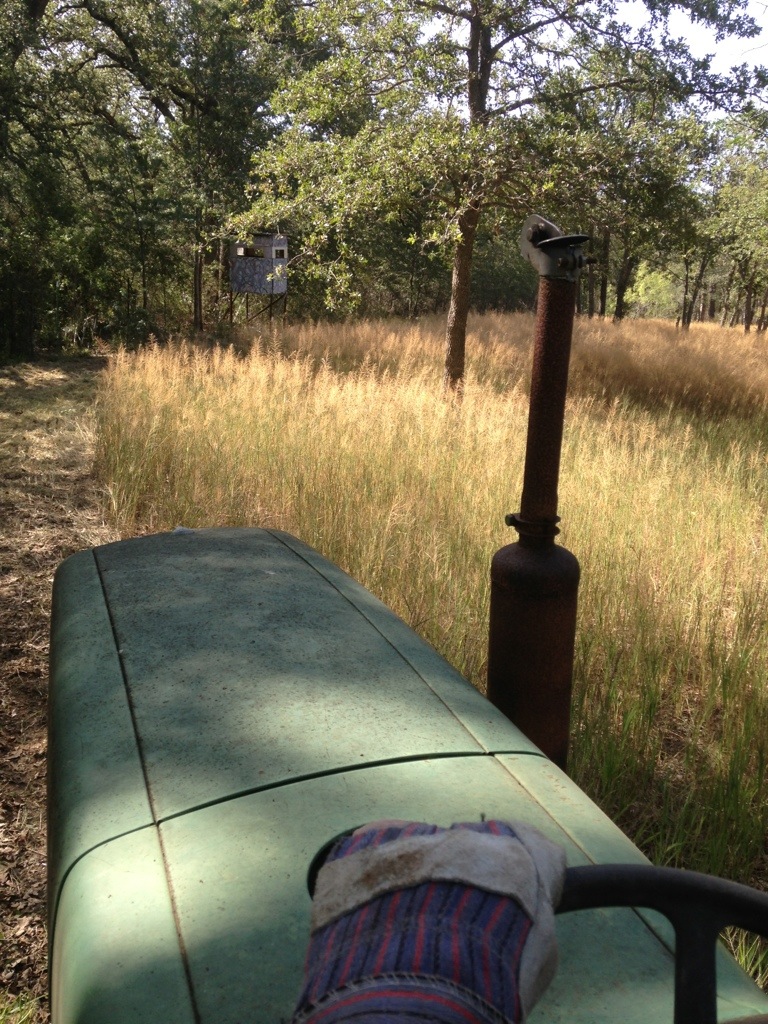 First up was some mowing. We plant a food plot every year and this process starts in summer so I had to mow it and have it ready when the rains come to plow it under. I’m not a farmer but have learned to plant a very good food plot. I just do what Ive seen farmers do then hope for rain. Notice my gloves, I wear those because that’s what farmers do, I don’t even like gloves but I’m trying to be a farmer.

All done, and waiting for rain. 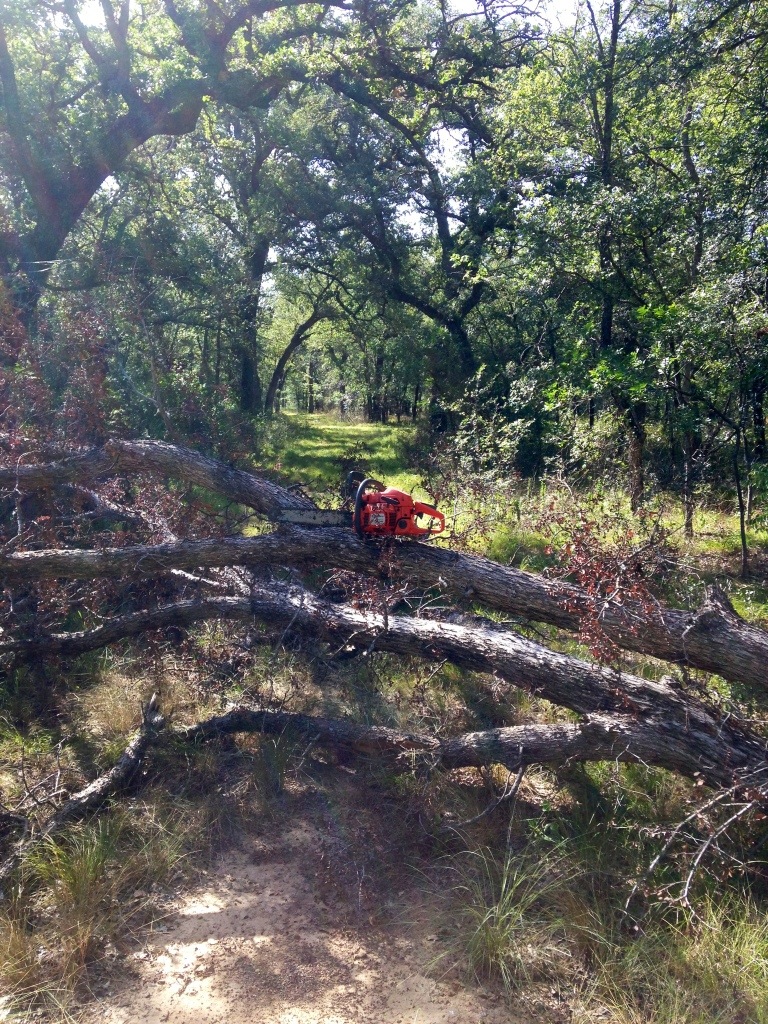 Next was mowing the roads. I like to mow the roads because it makes my little scaly friends easier to see and most times I walk in the dark so I need all the help I can get and if your like me you will try to get ten years out of a pair of boots and they leak because they are five years passed their good use so when the grass is short on those cool mornings when its wet I don’t wrinkle toes from wet feet. Seems easier to just buy new boots doesn’t it? As always is my luck I round a bend in the road and there’s a tree down, so out comes the chainsaw. 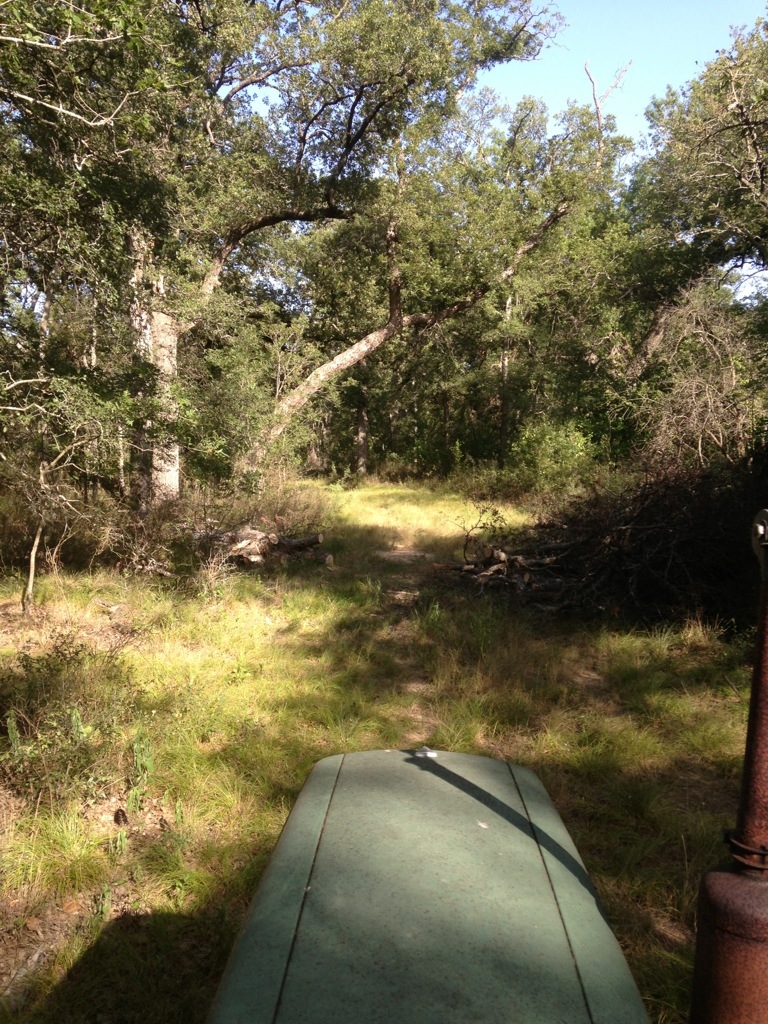 30 minutes later I have a clear road and a couple fires worth of wood for camp. 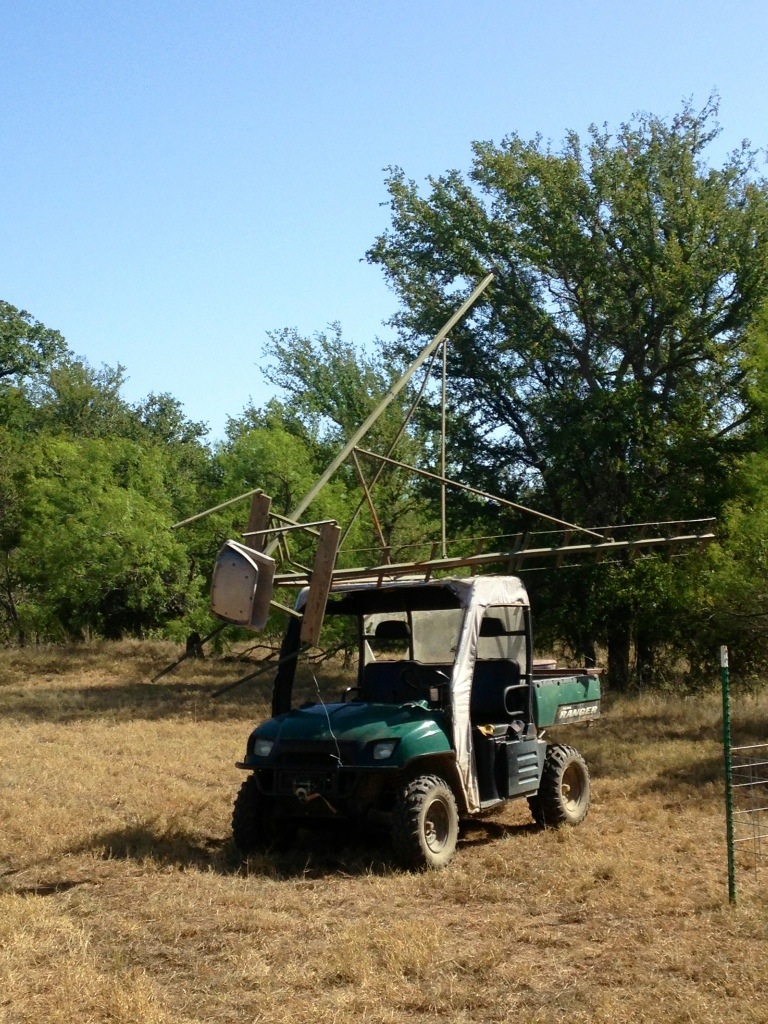 Had to move a stand and wasn’t really wanting to take it apart so I used a little muscle, that’s all I got, and a little less brains and some wire and rope and luck and some how loaded this 16′ tripod on the top of the Ranger and moved it about a half a mile without killing myself or breaking too much equipment. 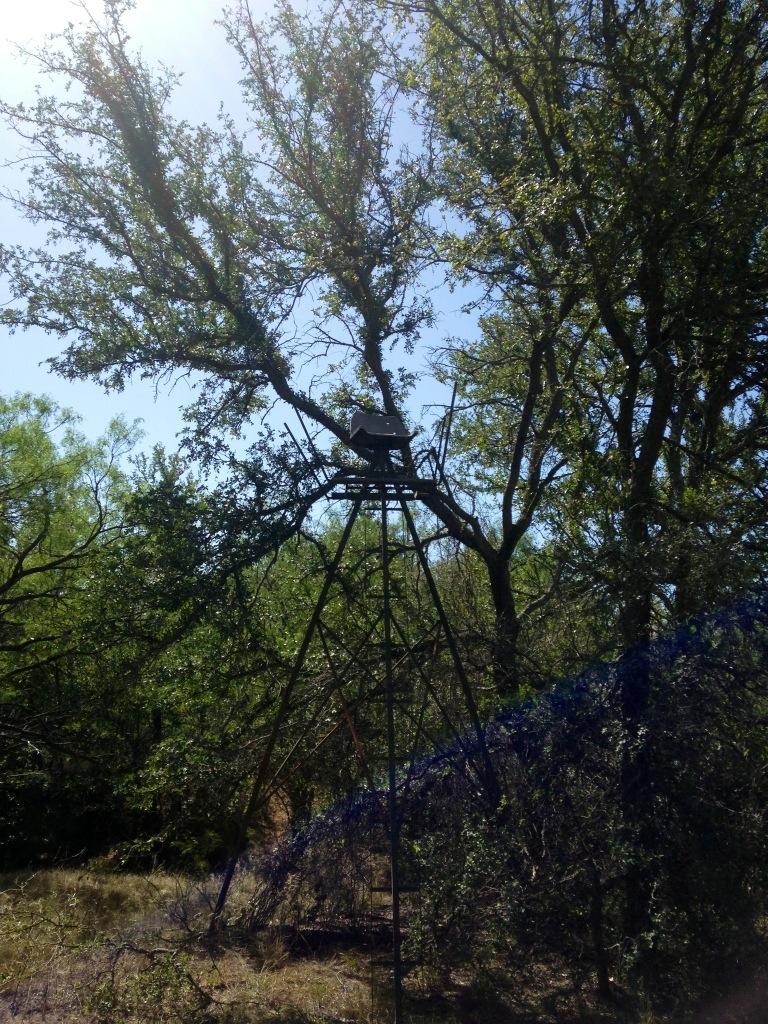 Stand in its place, I will put final touches on it later. 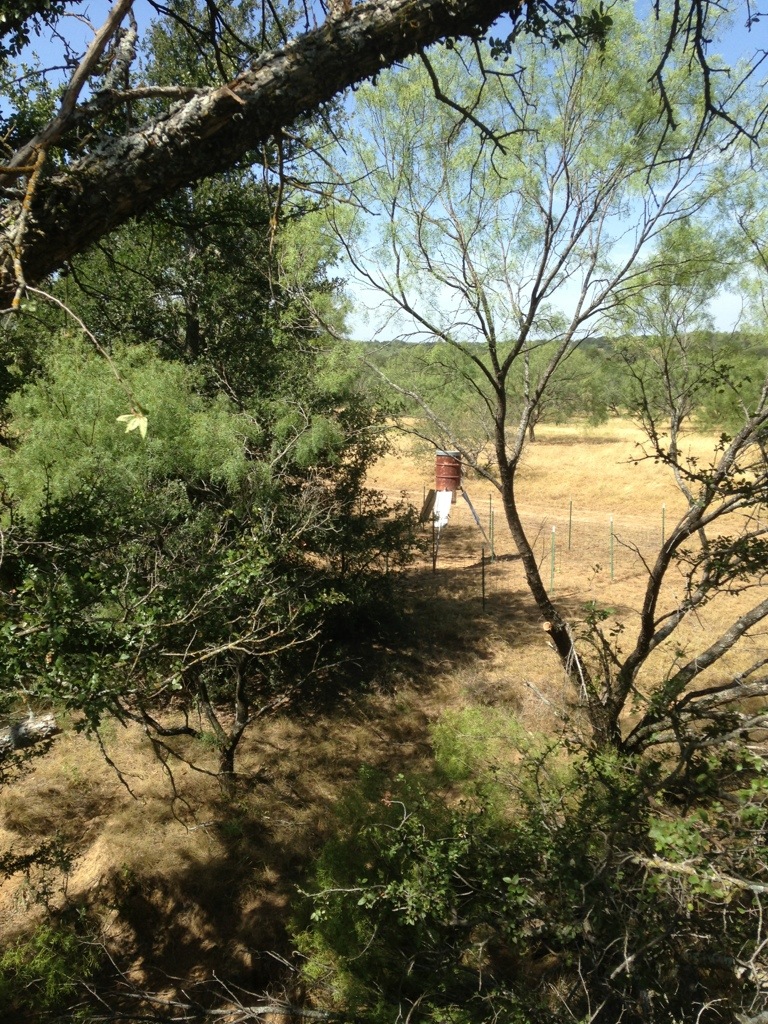 View from the stand. This is gonna be an excellent spot in early season with a south wind and there’s already a couple big nasty pigs showing up that I hope to show you a picture of with me standing beside. 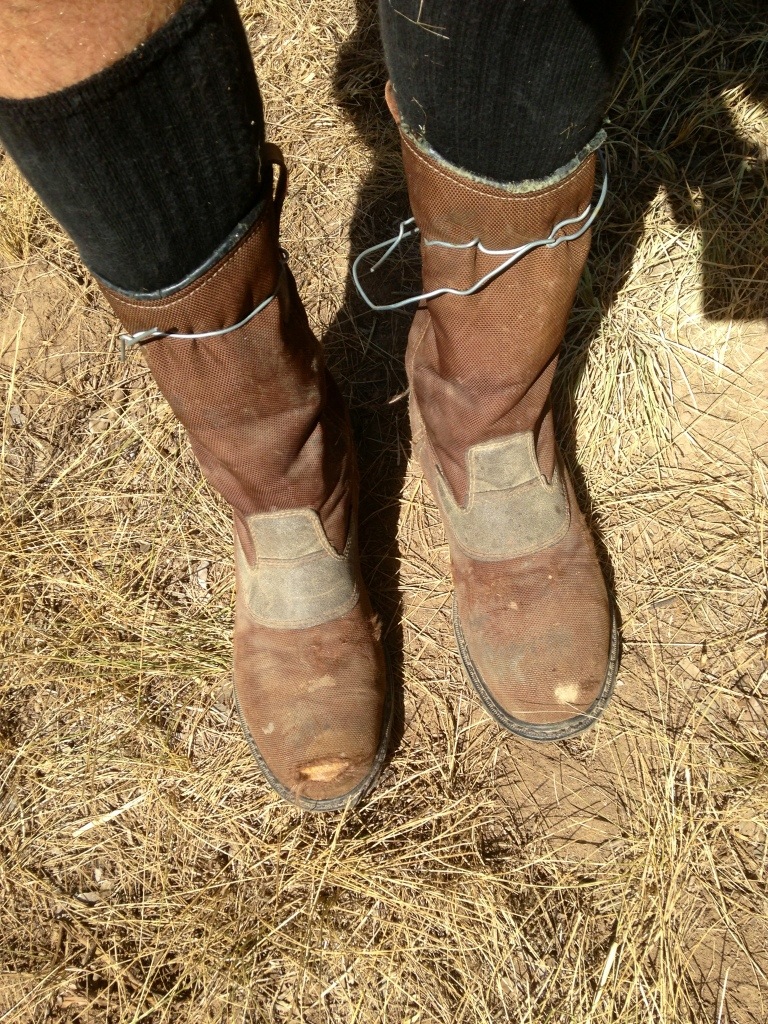 You should never chain saw in shorts for a few reasons but if you find yourself where you have no choice then you have to improvise. Alex laughs at my “grandpa socks” but that’s ok I’m not in this for fashion. When you chainsaw with shorts on the little chips get in your boot and all over your grandpa socks so I fixed that little problem. Cute huh? I’m glad nobody drove up and seen this outfit. 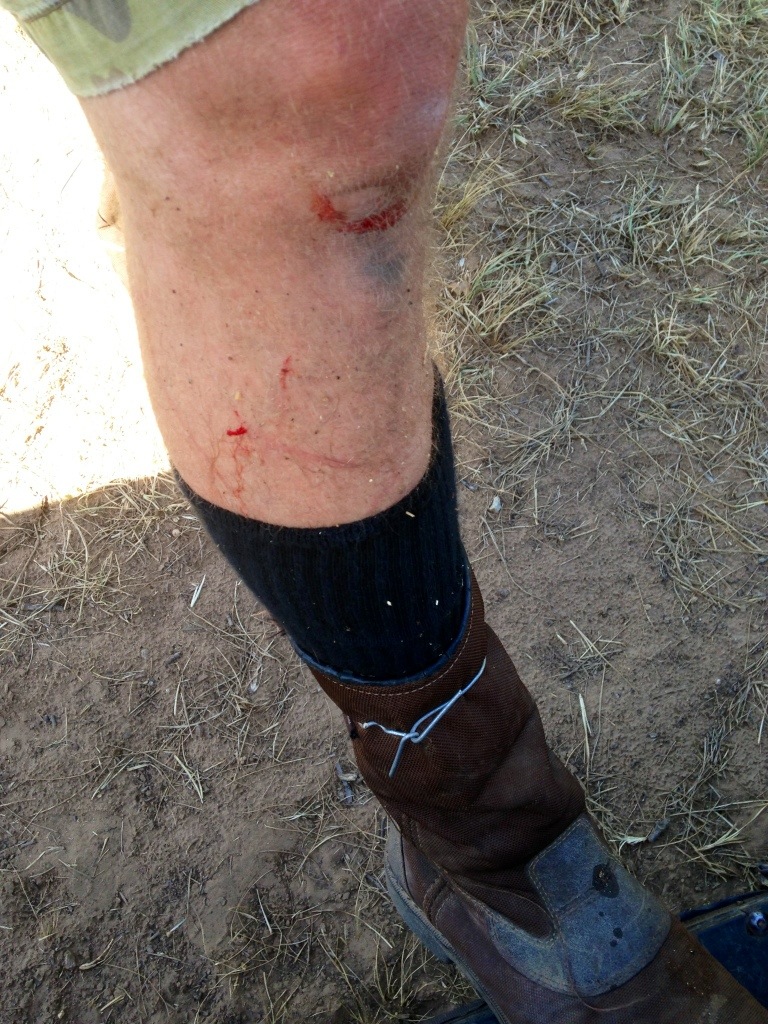 If you do chainsaw in shorts and alone you run this risk. I had cut a heavy branch above my head and let it swing down slow and as it hit the ground I ran and of course when it broke it rolled at me and the smaller branches hit my back and knocked my breath out and knocked me into a nice clump of briars where I landed on my knee with a thud. It was 100+ degrees and I was bleeding and tired and needed a break. I loaded the saw and headed to town. 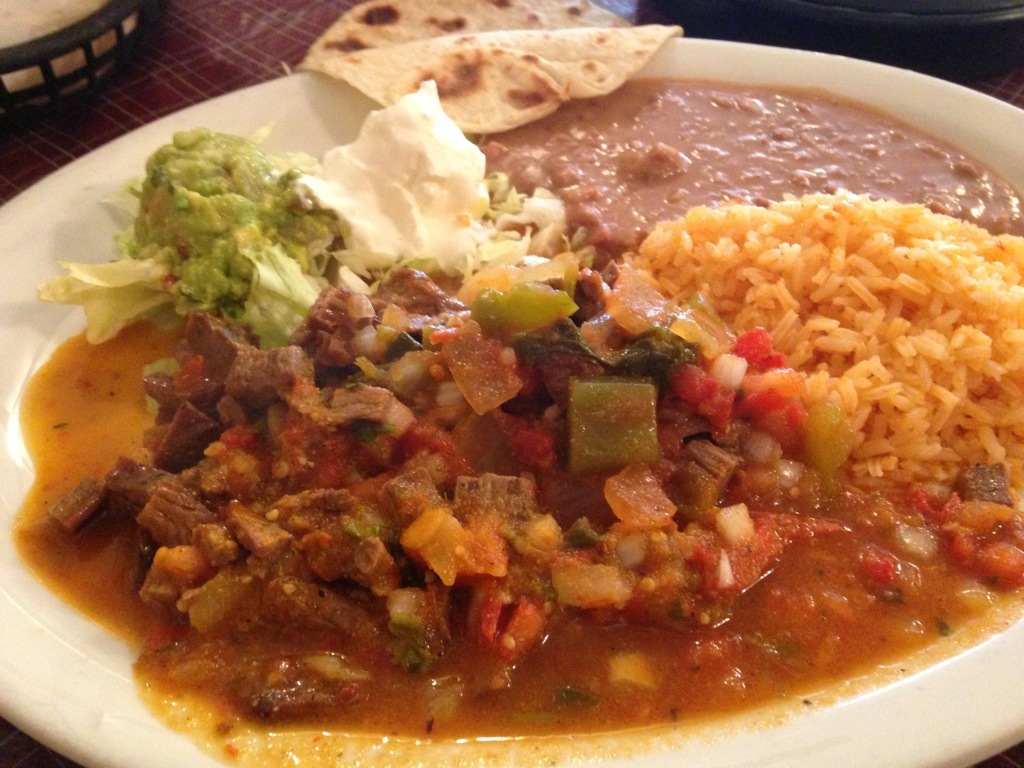 Ended up at Casa Grande Mexican Cafe in Jacksboro. Its good, I had carne guisada, which is Mexican stew, and feel it would have been just right at supper time. I got there when they opened and the meat was a little chewy but had good flavor. Had it had time to cook until supper time it would have been perfect. I think I’ll go back later and find out. 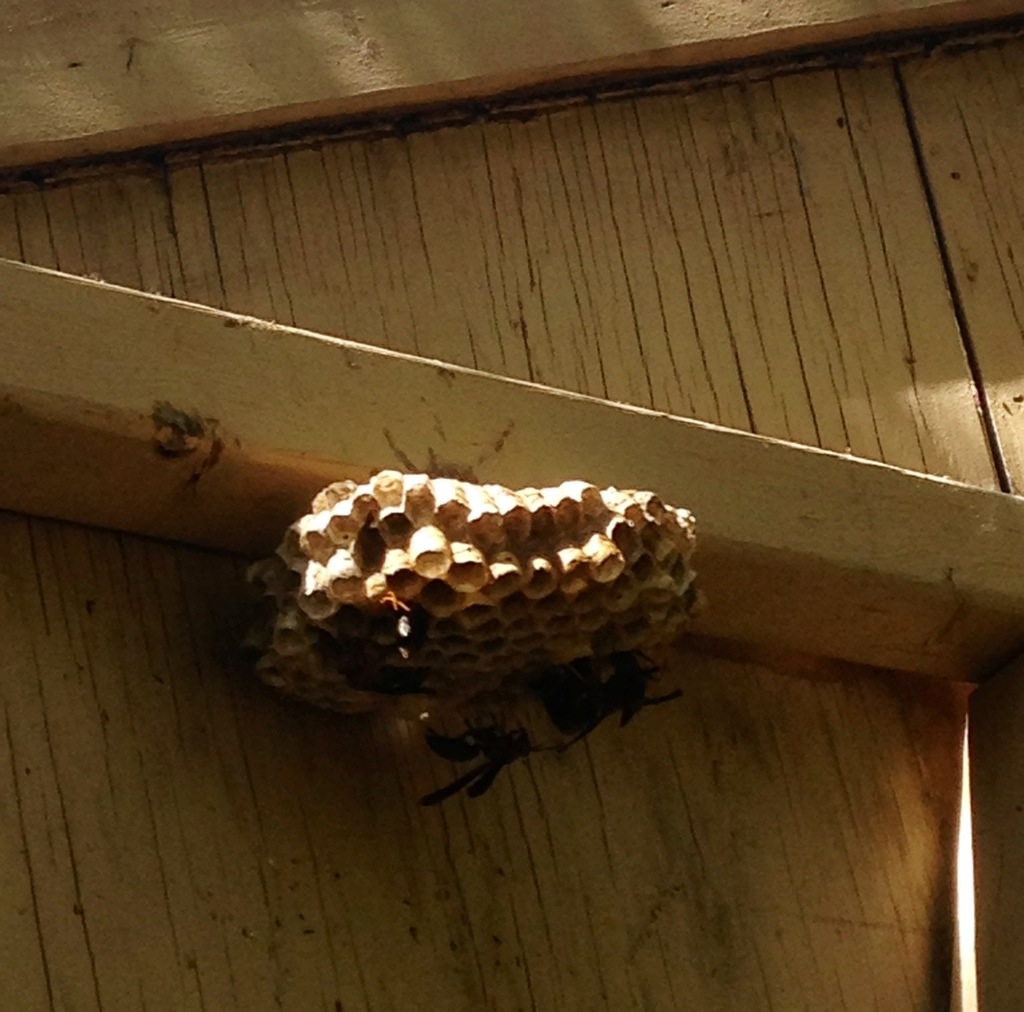 Fixed some feeders and fed a few places and turned my attention to stands. More than anything I have to do in the summer I hate to open the door to stands. They always have wasp nest, and sometimes squirrels, or even owls but I hate, I mean hate, with all my heart wasp. I will and have caught rattle snakes with my hands, I chase pigs in the dark through briars and copper head infested swamps, and never think twice about any of it but something about these things makes me scream like a girl and run. I know this pictures is not good but if you want a better look I’ll show you where they are and you’re more than welcome to go get one. 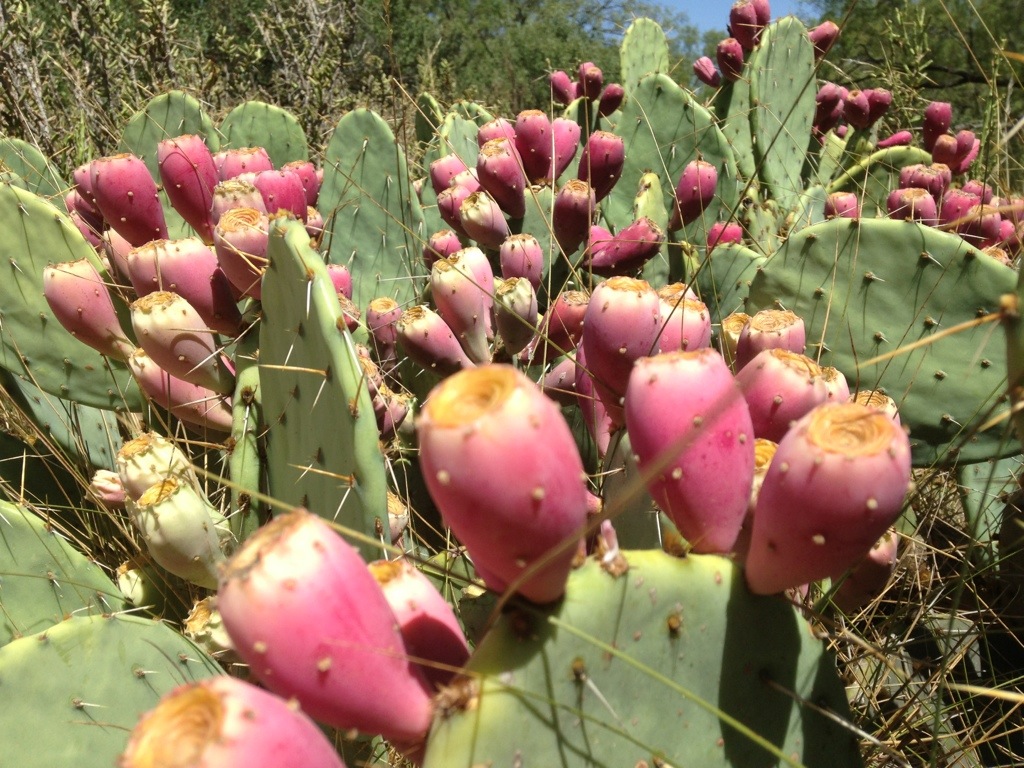 I got a lot of work done and only ended up with a half dozen chiggers and two ticks, that’s not bad at all. I think after day one I had built up enough stink to repel most of the creapy crawlies and I guess it was too hot for even the snakes because I never seen one. I take a lot of pictures of lots of things and liked this one. Even the pretty things here will hurt you and yes I dropped my glove in one and put it on so I had to pick cactus needles out of my hand for an hour. I just keep thinking of cool mornings and big nasty hogs and keep working, soon enough I’ll be writing about the deer I missed and the hog I didn’t and it will all be worth it.