I don’t wanna turn this site into a recipe blog but I do get asked all the time, if your always eating at the cafes then what are you doing with all the meat you kill? Well I eat it, almost everyday at one of our meals there is a wild animal involved, wether it be breakfast sausage or fish for supper or a smoked hog quarter, we eat everything we kill. I give meat to family and friends and will on occasion share some summer sausage too. So here are few pics of me and Patrick making brats this weekend. I made some oryx and bacon brats a couple years ago and really liked using the bacon ends as the fat so we went with that again but this time the meat was likely the most mixed up batch of brats anyone has ever seen. I had bits and pieces of several critters so what better way to clean some out than mix it all up with some bacon and brat seasoning. These would be mule deer from Montana, hog from Jack county, turkey I killed a few weeks back, a couple squirrels, and half a dozen or so duck breast for some stronger flavor.

Cutting the meat from some squirrel and a hog quarter. 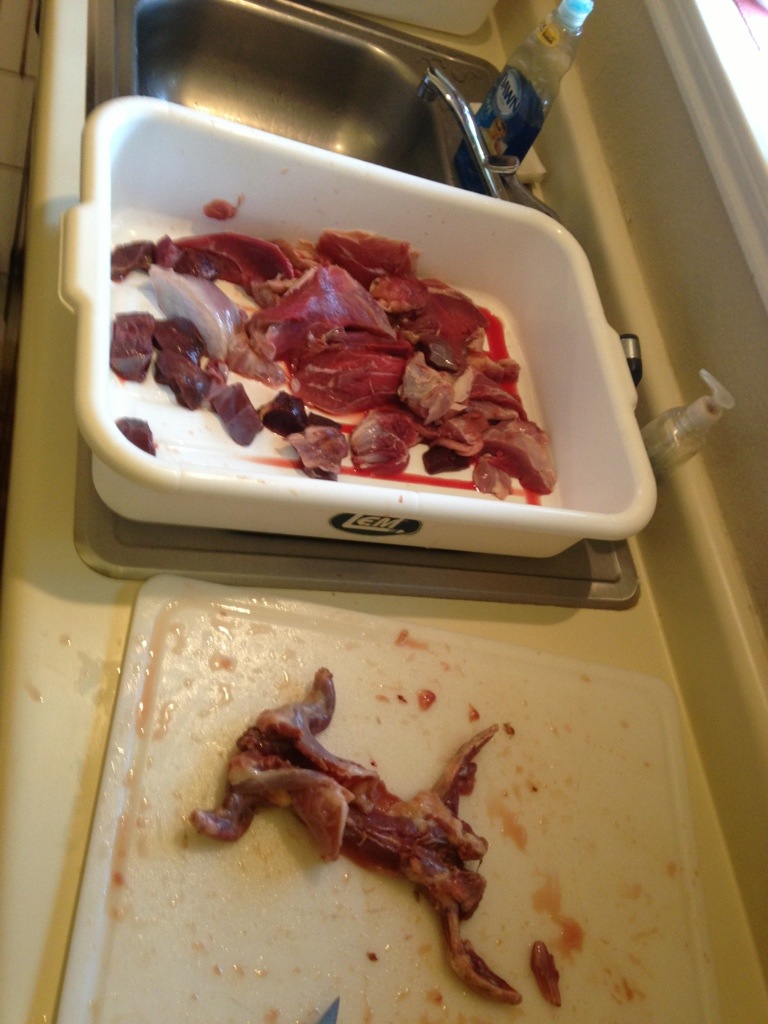 Wild turkey thighs and legs are usually tough and have a ton of convective tissue so I cut most of the meat off I can and add it to the mix. 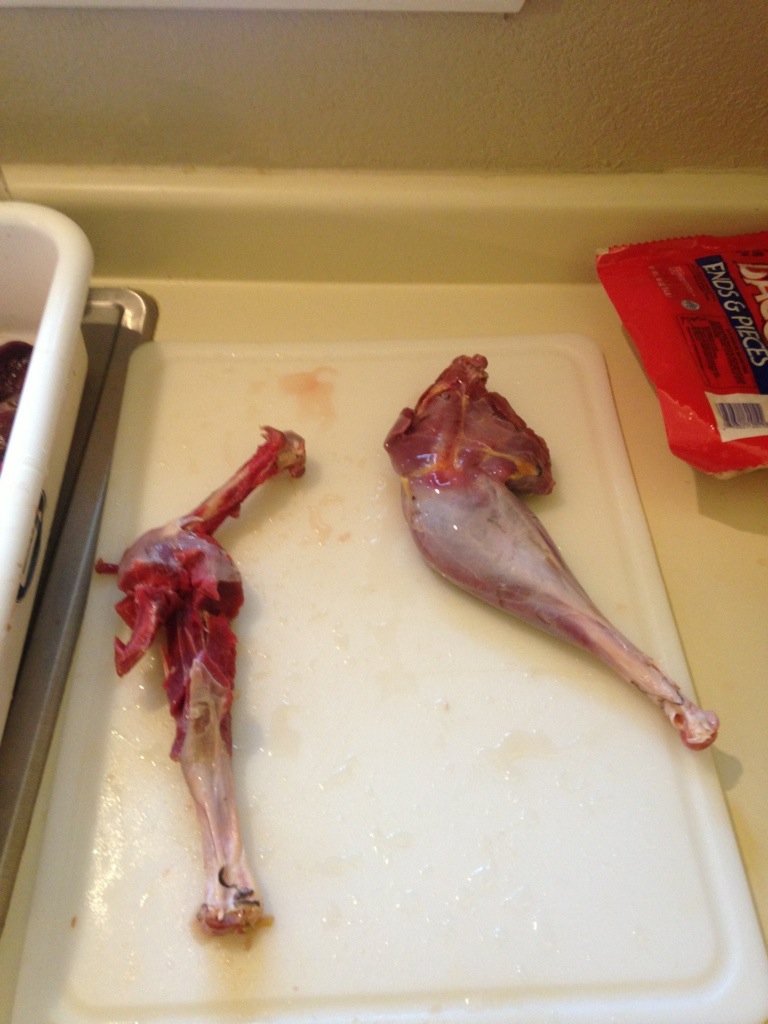 More cutting and adding the bacon ends. These are just random size pieces of fat and meat that was trimmed off when they cut the bacon after it was cured. It adds a smokey flavor and good fat content, I’ve found about 30% is a good balance of not being too fatty and still get good flavor. Hell I don’t need to explain why I put bacon in them, its bacon that’s why you put bacon, name one thing that’s not better with bacon. 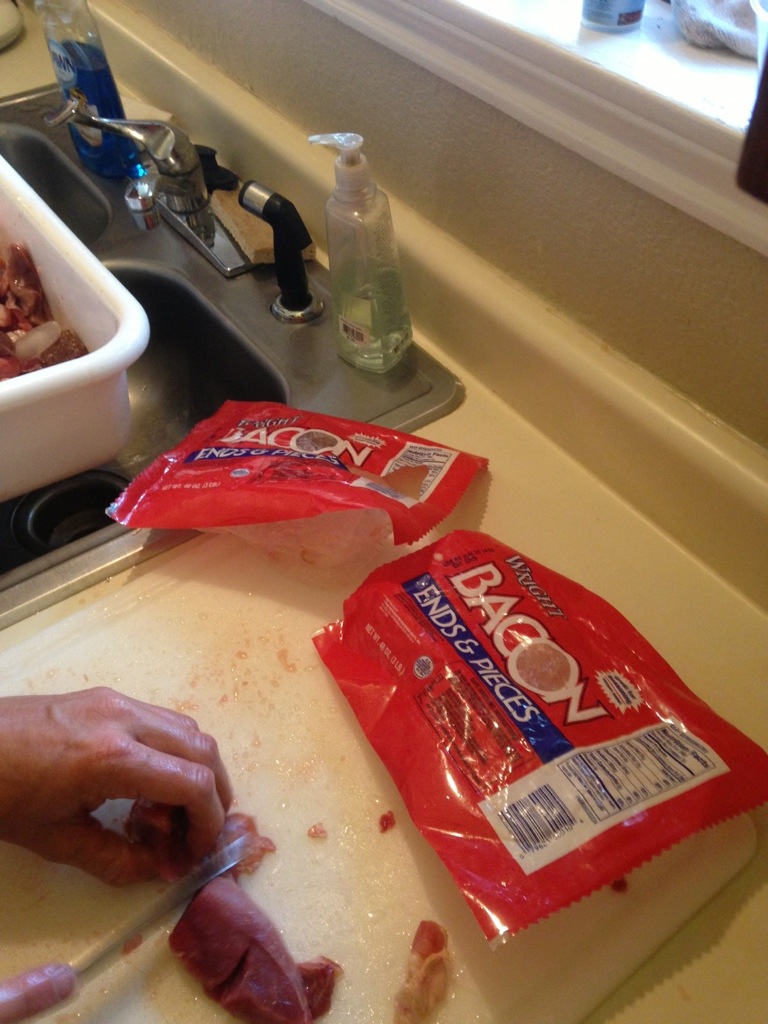 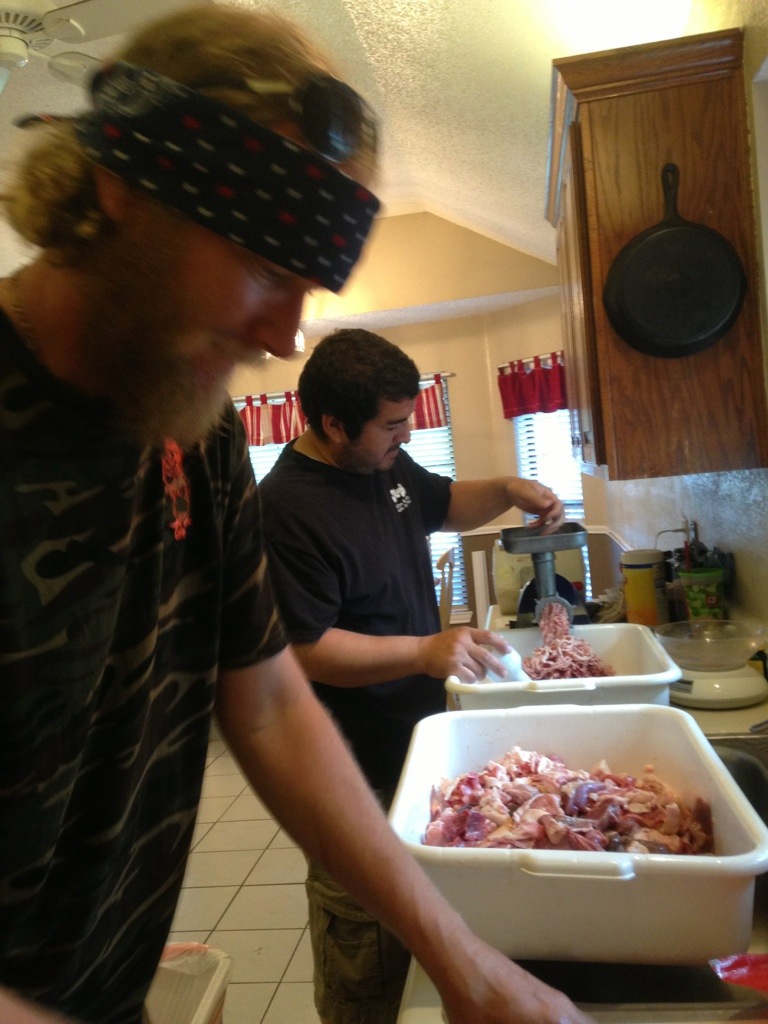 Its an old school sausage stuffer but its effective, one day I will upgrade my equipment but for doing small batches this is not bad. I have a small grinder that does about three pounds a minute and my stuffer holds three pounds also, so its not a commercial operation but if you’re not a little tired when you get done the brats just don’t seem to taste as good. 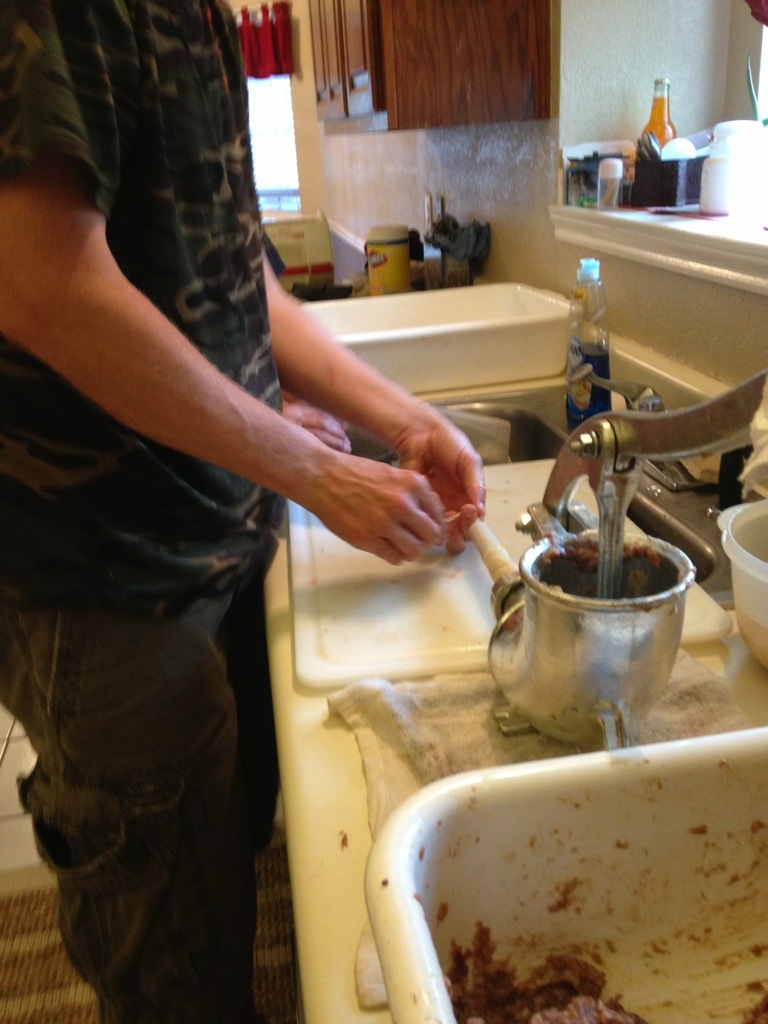 Once we get all the meat mixed and ground and let sit in the fridge for a bit to soak up the seasoning its just a matter of making brats then. I only use natural hog casing and if you don’t know, that’s a real nice way of saying pig intestine, I know it sounds gross and I guess if you think about it, it kinda is but hey I put bacon in it so its all good. You simply slide the casing over the end of the stuffer and as you pull down on the handle the meat is forced into the casing and beautiful brats come sliding out. 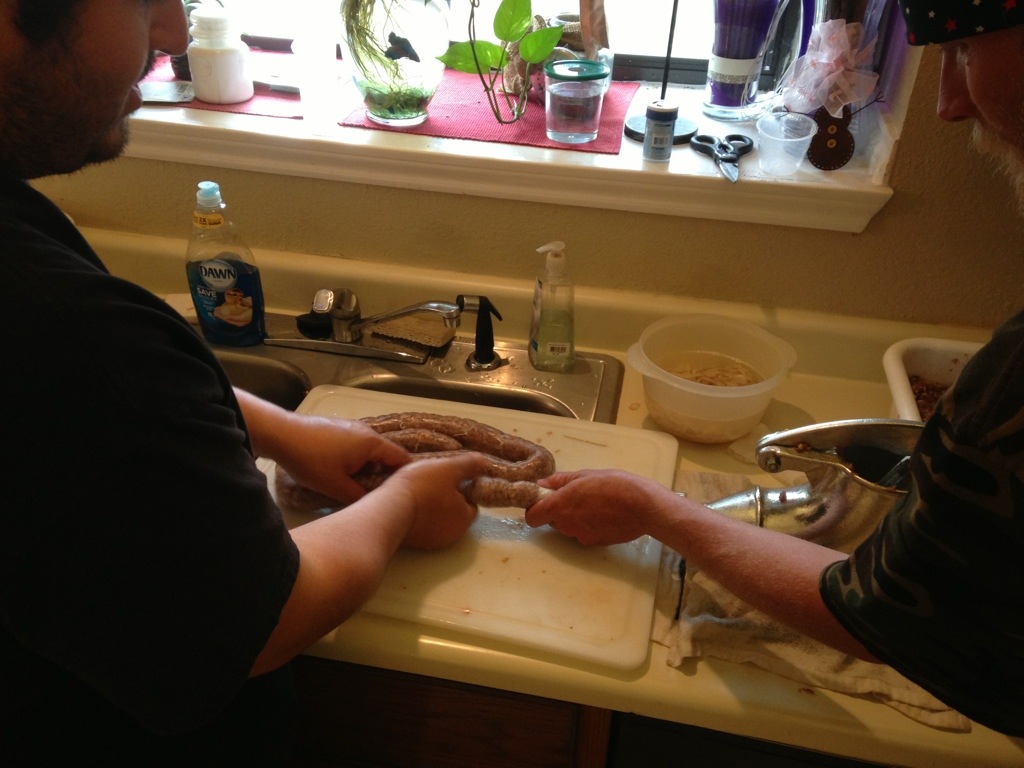 You can twist as you go or just fill the full length of the casing then twist to get more uniform length. Patrick made me laugh as he was the “twister” and we had brats shorter than a hot dog bun and some twice as long but that’s ok, that reminds you they’re home made and as he said when he twisted one out about 2″ long one time, “hey kids gotta eat too”.

We made 20 pounds, which depending on your “twister” will be somewhere between 70-80 brats. A quarter pound brat is pretty big but I like them that way. 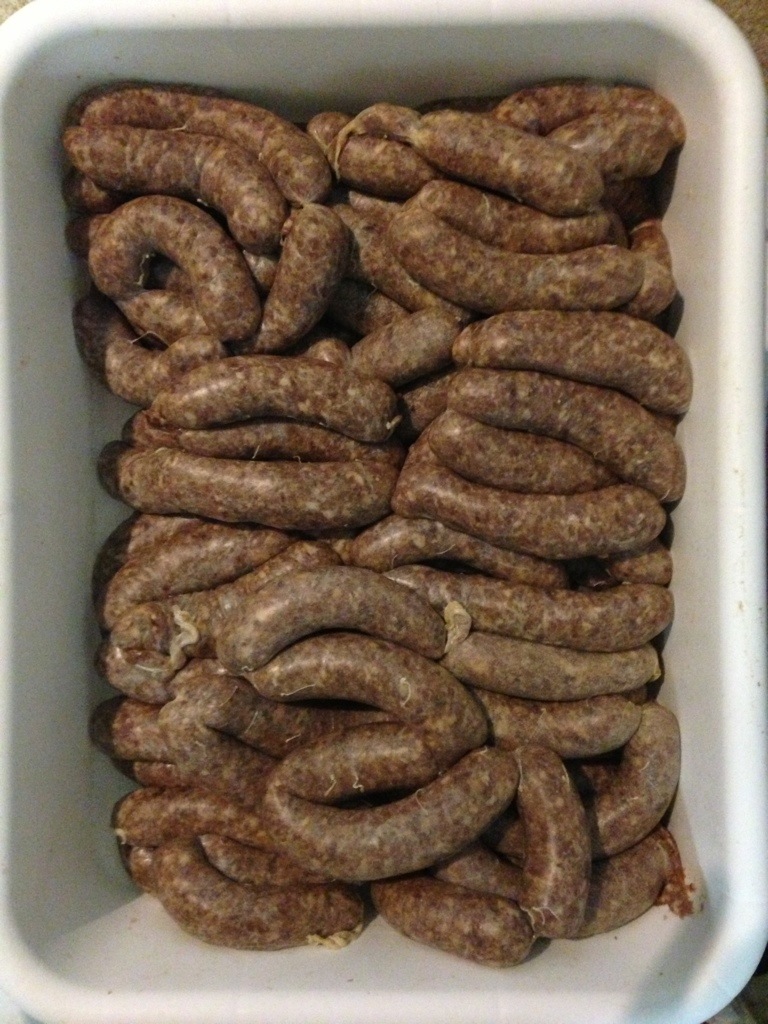 Everybody has their way of cooking I guess but for me its a little boil in beer and onions and then onto the grill, if you’re cooking a bunch or need to keep them warm I just put them back in the beer with the onion to stay warm. I usually pull the onions out and add a little bacon grease to a pan to sauté the onions in. Yep that’s right bacon brats with bacon grease sautéed onions, I swear I don’t hate my heart I just really like food. 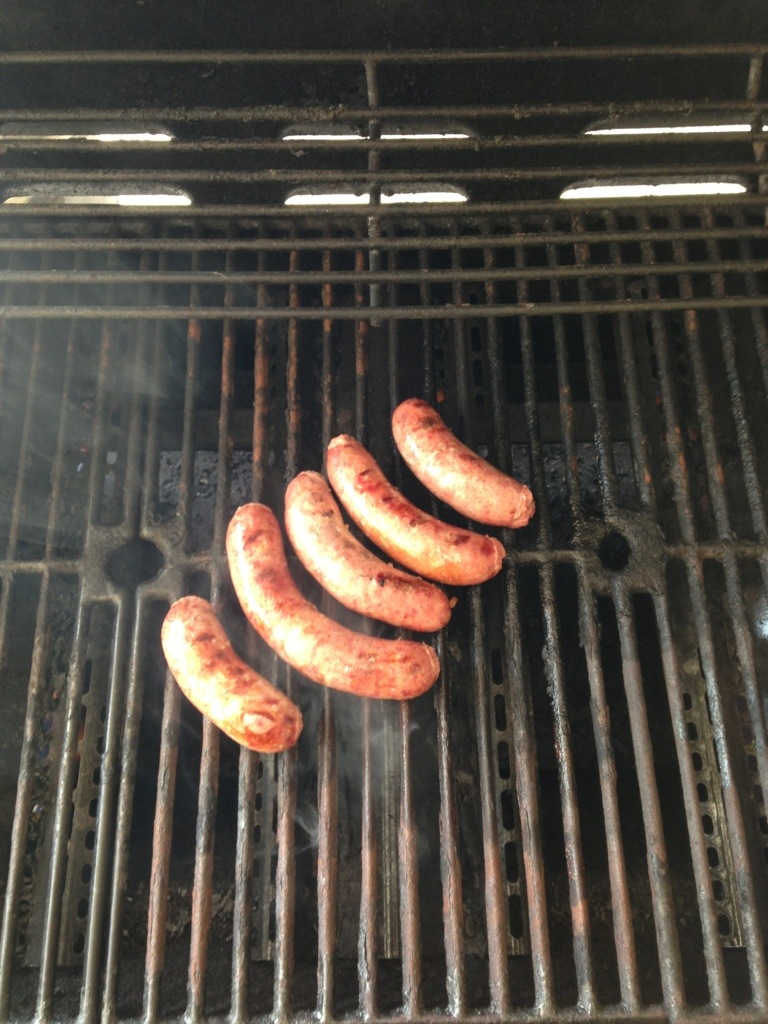 One of these and some sweet tea and you’re set for awhile. We did all this in about three hours, and an hours worth of clean up. One of the disadvantages of doing small batches is the clean up is the same for ten pounds as it is for a hundred pounds but that’s ok with me I kind of enjoy the whole process and I never hear any complaints when I’m grilling brats around the pool, it makes you think of the hunt again. There’s nothing better than remembering how cold you were in Montana or the morning you swore you had frost bite on your toes when duck hunting or when Alex jumped in the icy pond to get the very duck that you are eating when its 110 degrees in July. Its a lot of why I do what I do. I’ve introduced a lot of people to wild game and hunting with good food. Many people think they don’t like deer or will say I just can’t eat that, all the while they are eating my “beef” enchiladas and telling me how good they are. After they get done I’ll let them know that the “beef” they just ate was a big fat white tail doe that I killed on the food plot that I grew and that meat was processed by me in the kitchen they are eating in and it really makes them think about what they think they know. 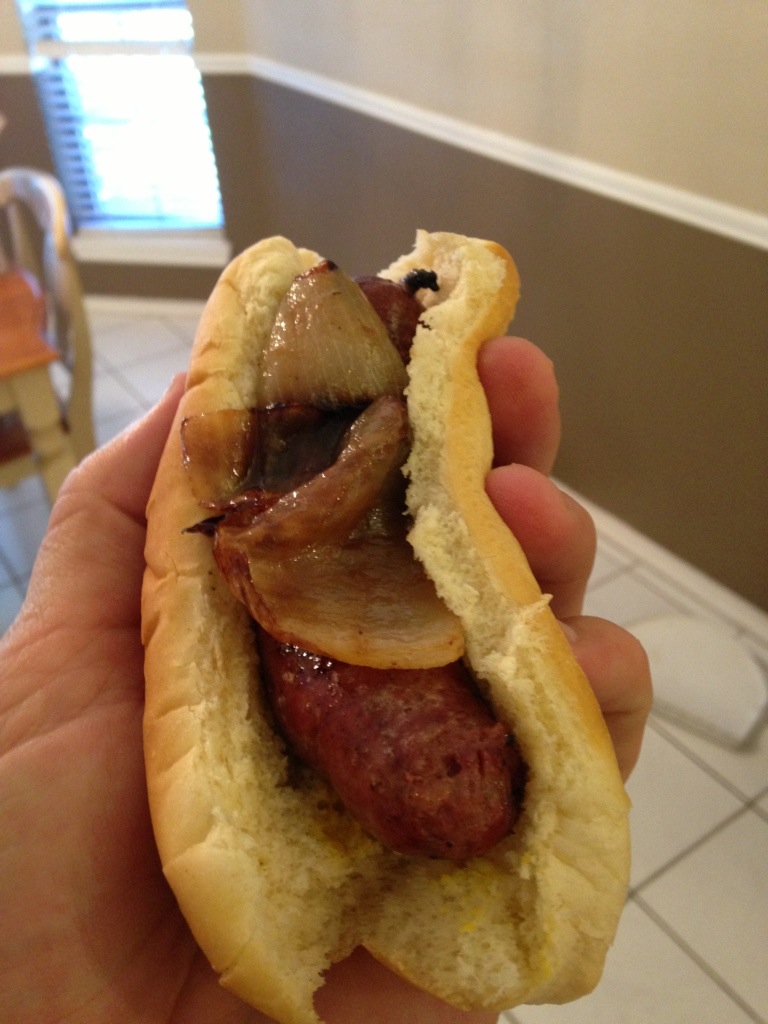