This trip was gonna require me to be a taxi driver, turkey caller, baby sitter, and uncle. My nephew Keeton has been asking for a couple years to take him to shoot a turkey and we just haven’t been able to line it up but this weekend we made it work. First off we needed food to get going and I haven’t been to KN Root Beer in Graham in awhile so that was our first stop. Now when I was in high school if you wanted to treat a girl you might be sweet on to a nice lunch you took them to KN and bought them a guacamole burger and frosty mug root beer. This place has been open for over 50 years and was originally a drive up with the girls on skates bringing food and hanging the tray on your window but now there’s no skates just drive up. You can still go in and sit down and the order button is still on the wall at your table. When you push the button the lady comes out to take your order which was always funny to me because the place is so little you could just look over at her and tell her what you want. Anyway Keeton and his brother Landry and myself go over for lunch and root beer and its exactly what I remember. The food is not special but its good and cheap and they have frosty mugs what else do you need? 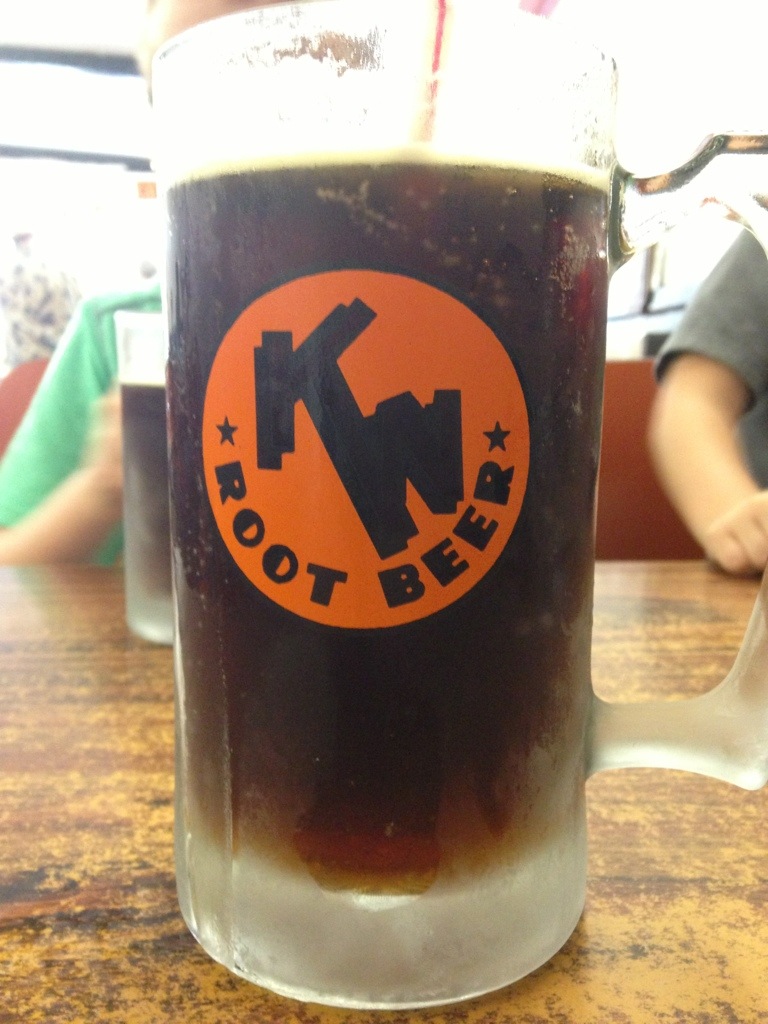 I remember when I was a kid I would always scratch letters in the frost on my glass and as soon as the boys got there’s they started doing it, made me laugh. 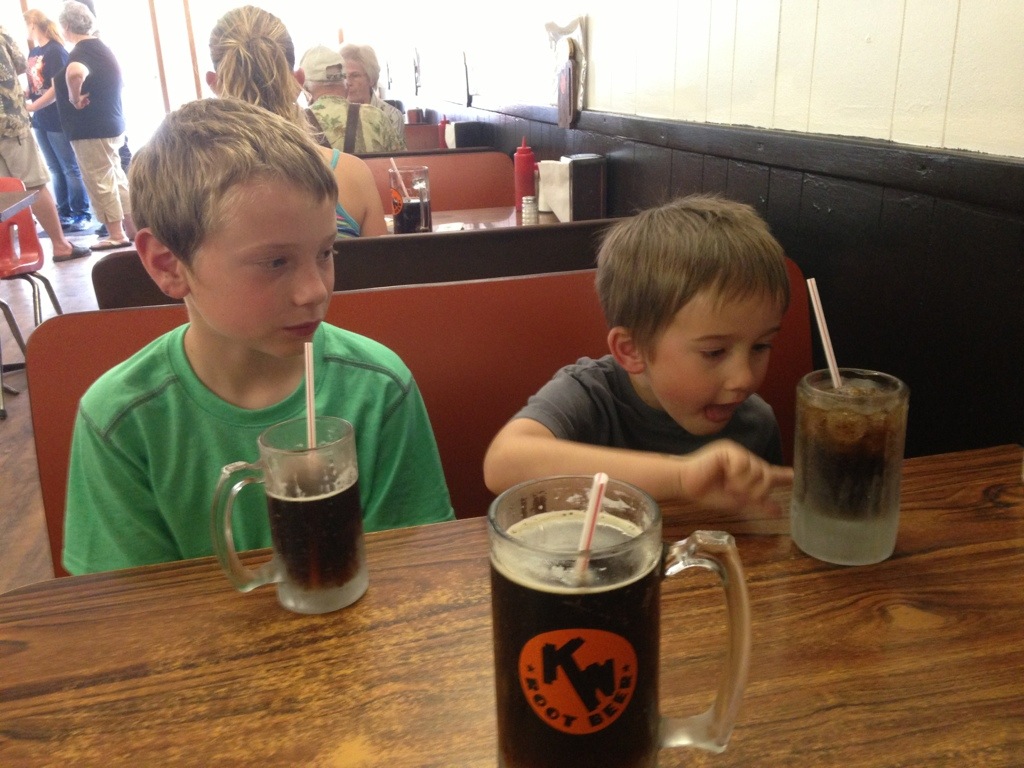 We got all our food and drink for $20 and they serve Blue Bell ice cream, man I gotta go back here more. 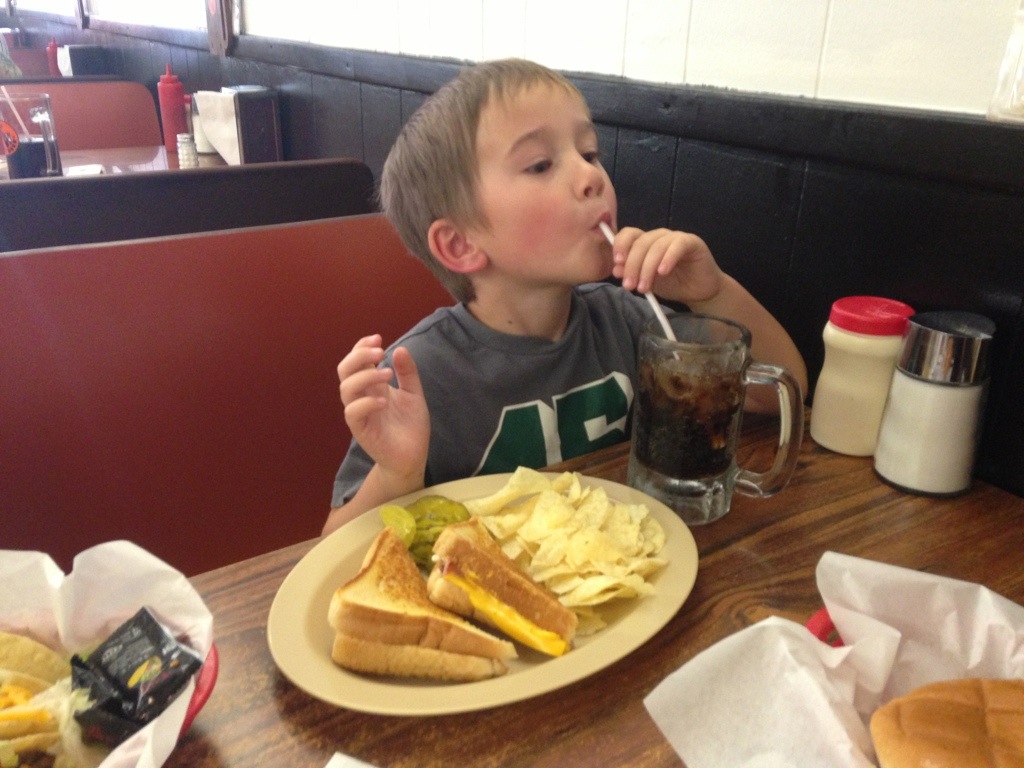 We got that done and I had to break the news to Landry that Keeton and I were going hunting and he was staying home but would get to go to an after dark Easter egg hunt. He was not liking the decision at all and it makes it hard on me to see the little dudes face but his day will come in a couple years.
Keeton and I got to the land at 4:30 and the wind was blowing 30 mph and since Keeton didn’t have camo with him I decided to go with my shorts too so he wouldn’t think he wasn’t prepared to hunt. I just told him don’t worry about camo this is how we’er gonna do it today so all was well with our wardrobes and now if I could call loud enough for them to hear it since we were confined to one stand we didn’t have the option of moving closer to the birds I had to make the birds come to us.
Ten minutes into the hunt hens started walking by in singles and pairs until the count got to 19. I had been calling and was getting responses but with the wind it was hard to tell which way the gobblers were. After two hours of the hen parade I was starting to think the gobblers had lost interest in my calls or couldn’t locate us when a gobbler fired off and he was close. I mean really close, I yelped a little and two gobbles came back, but I still don’t see them and how did they get so close without me seeing them. I looked straight down out the back window of the stand and there they were not ten yards from the stand. Now this was a good thing that could go bad quick if we made a wrong move. We needed to spin all the way around and get the gun out the back window and get Keeton lined up without being seen or letting the birds get in the brush. Luck was on Keeton’s side today because both birds started strutting and turned their backs to us. I quickly grabbed the gun stuck it out the window while Keeton spun around to get ready for the shot. By the time we got all lined up the birds were 55 yards and going away so I told Keeton when you get on one take him, he said, “I’m on him now”, I said “shoot him then”. Keeton put him down and the other one went up and straight back down so I worked the bolt and he got back on the scope and got the other one going away. Two shots two birds, not bad for an 11 year old but I wouldn’t expect anything less from kids raised by my brothers. 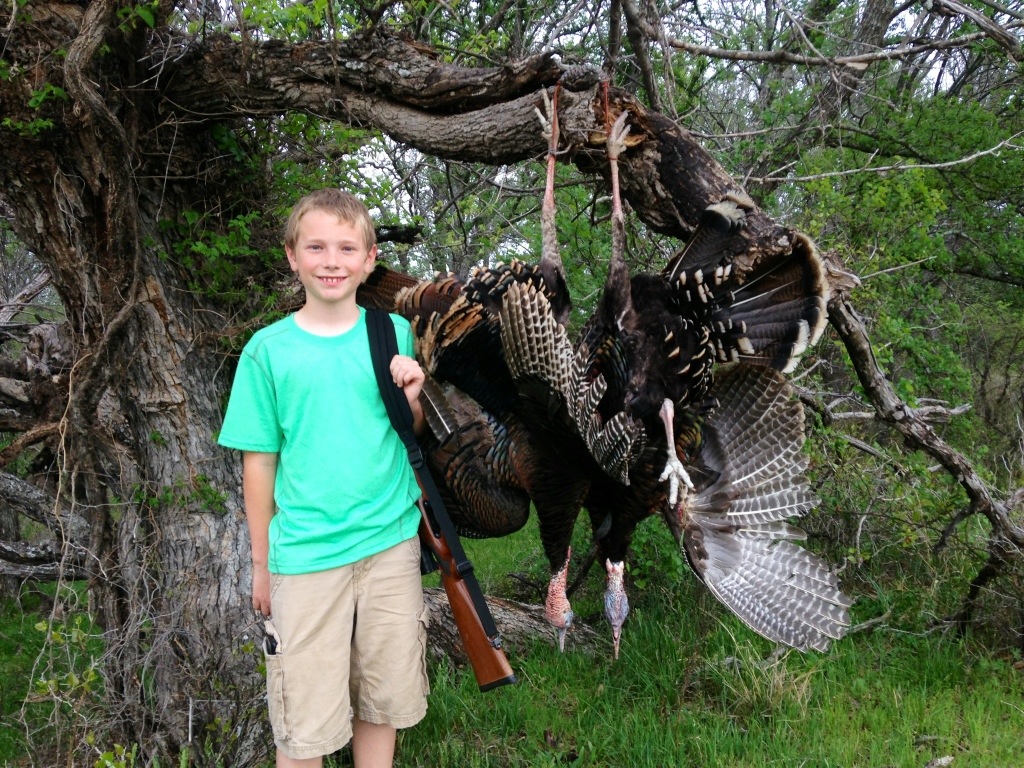 We got all this done by 7:30 and was back in time for after dark egg hunt. 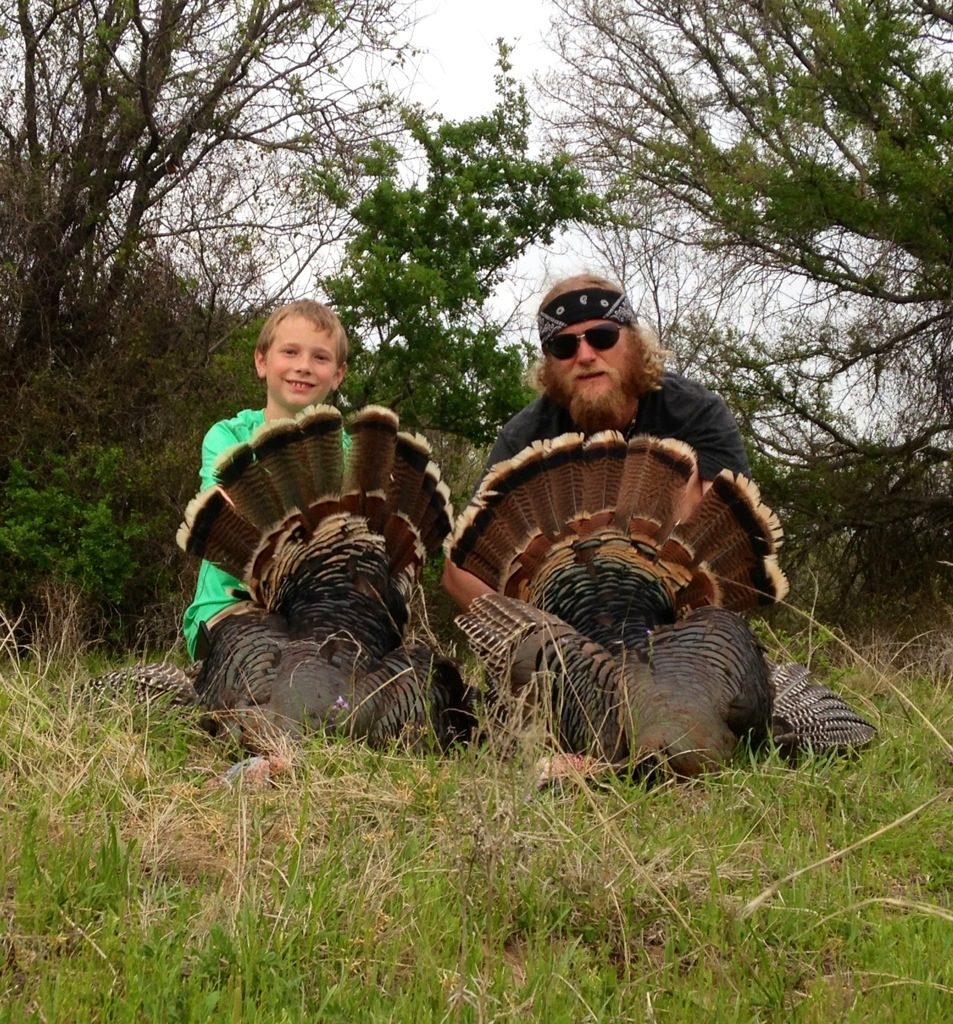 Its not your traditional spring turkey hunt but the boy got his first two birds and we found a way to do it in a lime green shirt and shoes and a bandana and sun glasses, hey you can hunt and look cool too.

Nate had been struggling with birds at his place so we decided to try it on my place the next morning and his luck transferred right over. The wind blew harder than the day before and it sprinkled and lightninged and thundered and the birds just weren’t having any of it. We got to the roost early and sat up where I had followed some birds off the roost the morning before and I thought we would have an easy go at it but like turkeys do they changed their minds and with the wind it was just tough so we gave up early and went for donuts and coffee. Back at Nate’s house I had some more uncle duties to do. Ryley and Cason were just getting up and around and it was Uncle Chris tattoo day. This is one of the cool things you can do with your nieces and nephews and then leave and you don’t have to clean it up or deal with the screaming that comes with washing it off. Ryley got some cool knuck tats and a flower and Cason had to be Superman so that’s what we did. A great big Superman S drawn in marker on his chest. 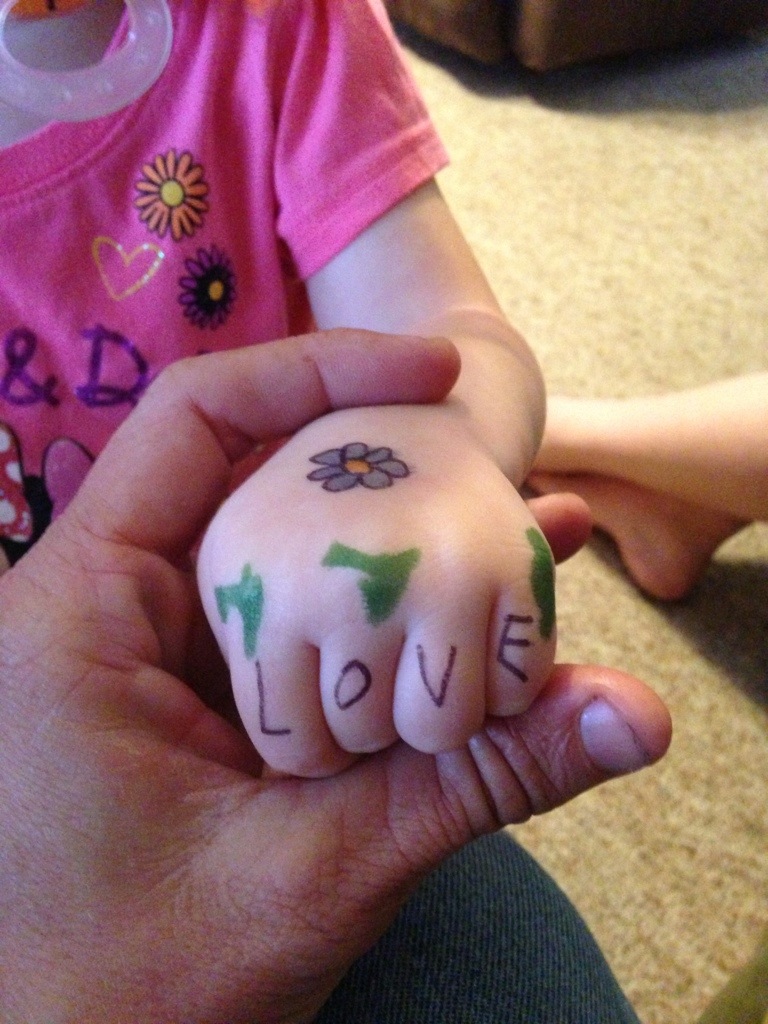 Looking like Superman is cool but if you can fly then you are no doubt a super hero. Cason wanted his picture taken flying like superman but in the sky not in the house. Now a good uncle would find a way to make this happen, so a quick app search and $2 later we were flying. I don’t know if there is a Uncle of the year award but this should solidify my nomination if there is. 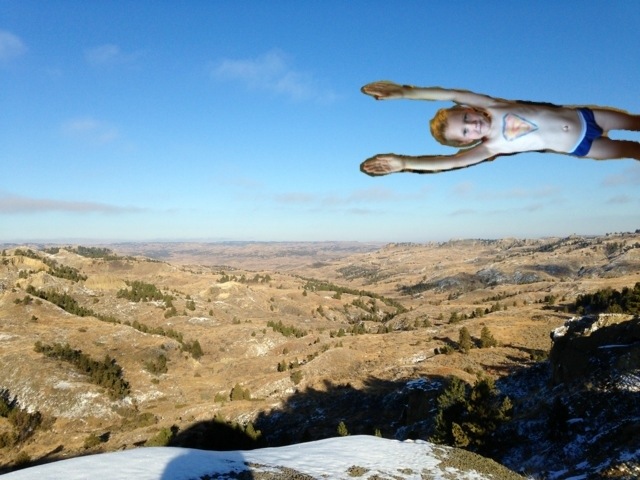 Ok, its a little cheesy but do you realize that in a five year olds brain Uncle Chris just gave him a Superman tattoo and made him fly over the mountains of Montana where he hunted mule deer and that is likely way cooler than any of the other kids at schools uncle? I think the picture is funnier that it looks so bad, either way my mission was done here. One nephew got his first turkeys, one nephew got to go eat and have frosty mug root beers, one was turned into a super hero and got a tattoo and little Ryley would be laying down some punishment at the day care with her new ink. Good weekend right there!