Two in the hand is better than one in the bush

Two in the hand is better than one in the bush. That’s the text I got from Nate when I told him I shot two jakes but the big Tom hung up in the brush. I read it and said, wait what, that don’t seem right. I laughed but he is right he just didn’t get the saying quite right.

Me and Patrick were out this time for some big gobblers and we had the perfect set up. We got to the roost just in time and got set up, Patrick on the camcorder and me on the 12 gauge. The birds starting flying down and I started making some sweet love sounds at them, at least I thought they were sweet. One gobbler didn’t think so but he had a girlfriend with him and he probably didn’t want to get hen pecked so he never looked at me but his buddy figured he’d take his chances with me.

I had set my decoy, Henrietta, up on the road for all to see but big Tom didn’t come down the road like I had planned, he came from below. Since he couldn’t see Henrietta from below he hung up at 55 yards and did his dance for 5 minutes trying to get the sexy sounding hen to come down to him. No matter what I did he wouldn’t budge. I whispered sweet nothing’s in his ear for about 7-8 minutes but it wasn’t enough. I should’ve tried the shot at 55 but I thought he would come on around through the brush, I was wrong, man I hate turkeys sometimes.

Round two was gonna be an ambush. I knew where they were going and if I could get there before them and sound like a hot chick I just might make the hens with them jealous enough to come check me out and that would drag the gobblers in too. The set up was just right, the birds were gobbling and hens yelping and they were headed my way. I glanced at Patrick he’s got camera rolling and we are about to be carrying birds to the truck. This is the part where I found a way to screw it up. I honestly think had I not made a sound the whole flock would’ve passed within range but like an idiot I yelped and the hen yelped back so I cut a little at her and the gobblers all fired off. This was enough for the hen. She turned and yelped and took all the boys with her. I’m not a good turkey caller but I get it done but no matter what I wasn’t gonna sound better than a live hen that the gobblers can see and with that we lost round two also. Have I said I hate turkeys sometimes?

Not only is it turkey season its opening day for the Graham little league baseball and my two nephews play on the same team and I wouldn’t miss it. Its a 30 mile drive and I doubt since they are five years old they will even remember I was there in a few years but I was there and we were gonna cheer like it was the World Series. We won 11-10 in a game that had about 37 errors, two kids that ran to the mound after they hit the ball, one kid that rounded first base going to second through right field, his name happened to be Cook we are gonna work on that, one kid break dancing as the ball went by, he happened to be a Cook also but we gonna work on that too, and I think in 6 innings there were about 10 outs made total, man you gotta love little kid baseball. 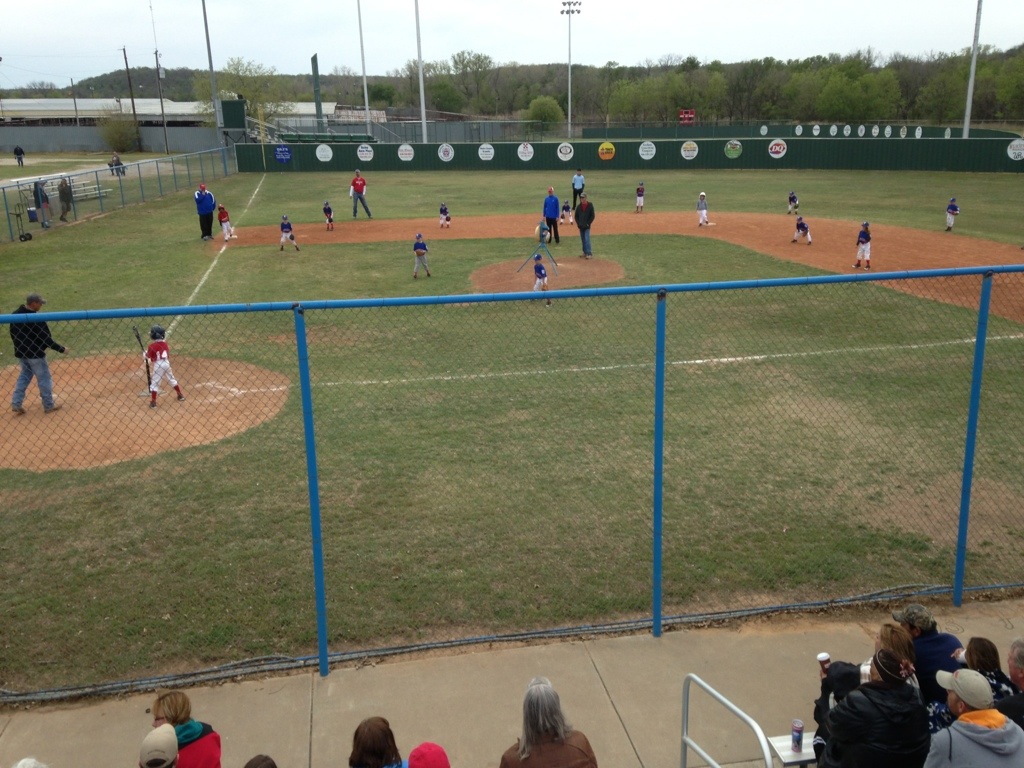 After the game we had a little cook out which made me get lazy and we didn’t get back to the woods in time to kill a turkey but it was worth it.

Going through Jacksboro we seen this. I’m not sure what they were doing or why they wanted you to pull over but they had an opinion and wanted everybody to know it. I gave em a little honk and wave on the way by. 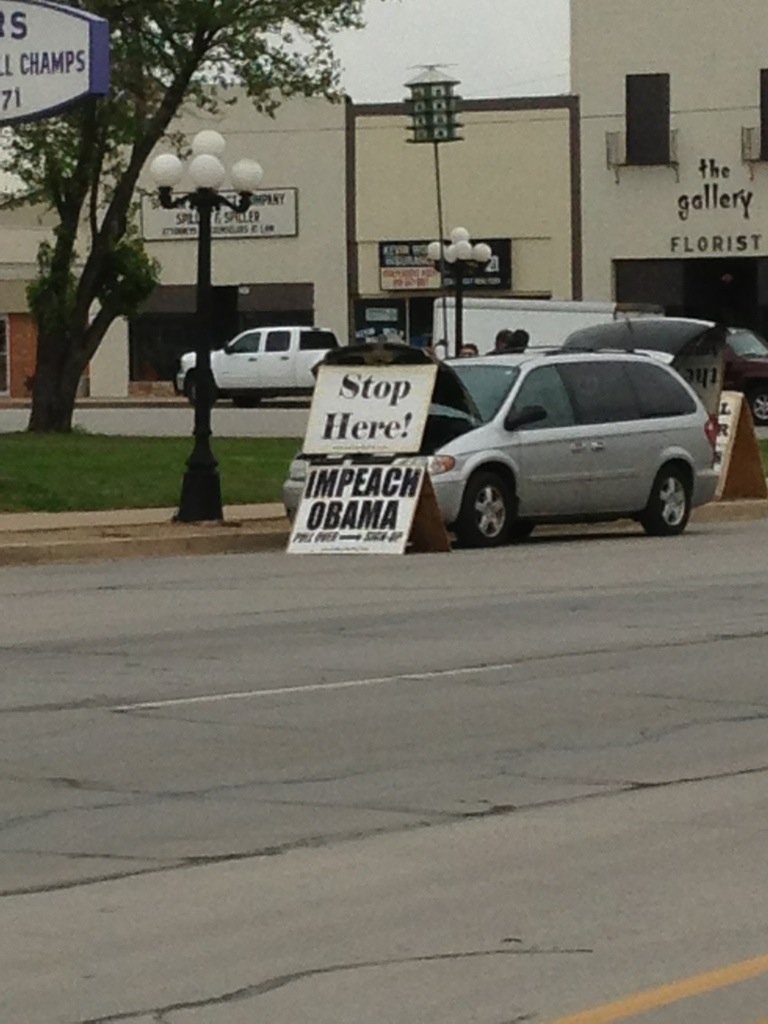 Next morning I had a plan that would put us a little closer to the roost and hopefully that would make the big gobblers fly down right to our set up so I didn’t have to deal with the hens. I’m a big dummy and took my coffee pot home to wash and forgot it and I do not function well without it so of course I was running late to the roost because I had to McGuyver a coffee maker.

It was getting light and I didn’t want the birds to spot us going in so we didn’t get as close as I wanted but still closer than the day before. I seen the birds coming off the roost and the gobblers were fired up this morning. They gobbled at every call I made which made me think I was the world champion caller but then they gobbled at the thunder and the rain and the crows and the birds and everything else that made a noise so I may not be the world champion but I’m good enough to fool a few birds.

I watched as one hen after another landed and the gobblers right behind em. I didn’t like the way this was going and I was hating turkeys more every second. We called back and forth for 20 minutes or so but I could hear the distance between us growing. I was already planning the ambush again but without calling when two gobbles came from my left and close. I turned slowly and looked there were two jakes with about 4″ beards and they were lighting up the morning with the gobbles, if you’ve never been on the ground and had gobblers in your face screaming then, brotha trust me you’re missing out. Suddenly I love turkeys again and although there’s not really a better sight in the woods than a red headed turkey strutting around my decoy I was gonna do my best to end this scene with the old Mossberg.

I knew I had these birds fooled because I was their only chance for love this morning as the big gobblers had the hens with them and here was sexy little Henrietta all alone so whichever one of these guys put on the best show would get the girl, they thought. I needed to move the gun left but they were already at 25 yards and getting closer so I did my best to move when they were strutting facing away or walking. I had the gun in position but thought I’d take one last glance at the big gobbler hanging out at 80 yards with his stupid girlfriend and he wasn’t having any of this nonsense so he sealed the fate of the poor jakes.
I put the bead on the far birds head but the closer bird had made me out moving the gun so I switch the bead to his head and filled it full of #4 shot. The far bird went up and back down and tore out running. I pulled the bead up above his head and out front a little and at 50 yards he did a nice barrel roll about 25 yards from his love sick buddy. Sorry guys you gotta be careful chasing them chicks around they’ll get you killed.

Patrick got the whole thing on video and I think he was more pumped up than I was. I had a bruised shoulder from the 3 1/2″ 12 gauge kick because I had to shift the gun down my arm a little to clear some brush and I was hurting. We got all this done before 8 o’clock on one cup of coffee and no breakfast. Man I love hating turkeys.

At the game my brothers father in law ask me how my turkey hunting was going and I told him the only way I can keep turkey hunting is to think that I do everything right every time its the turkeys that do something wrong. I love the turkeys but nothing drives me more crazy than thinking I have them figured out and then they change their mind. One day I’ll learn to stop thinking I’m smarter than a turkey. 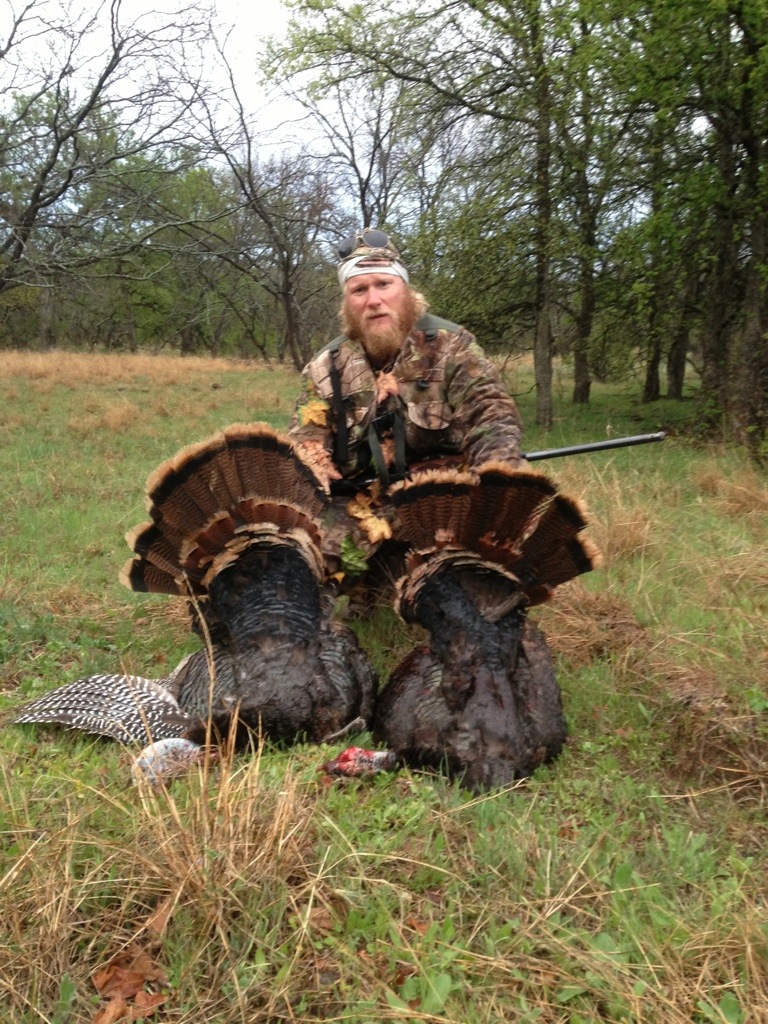 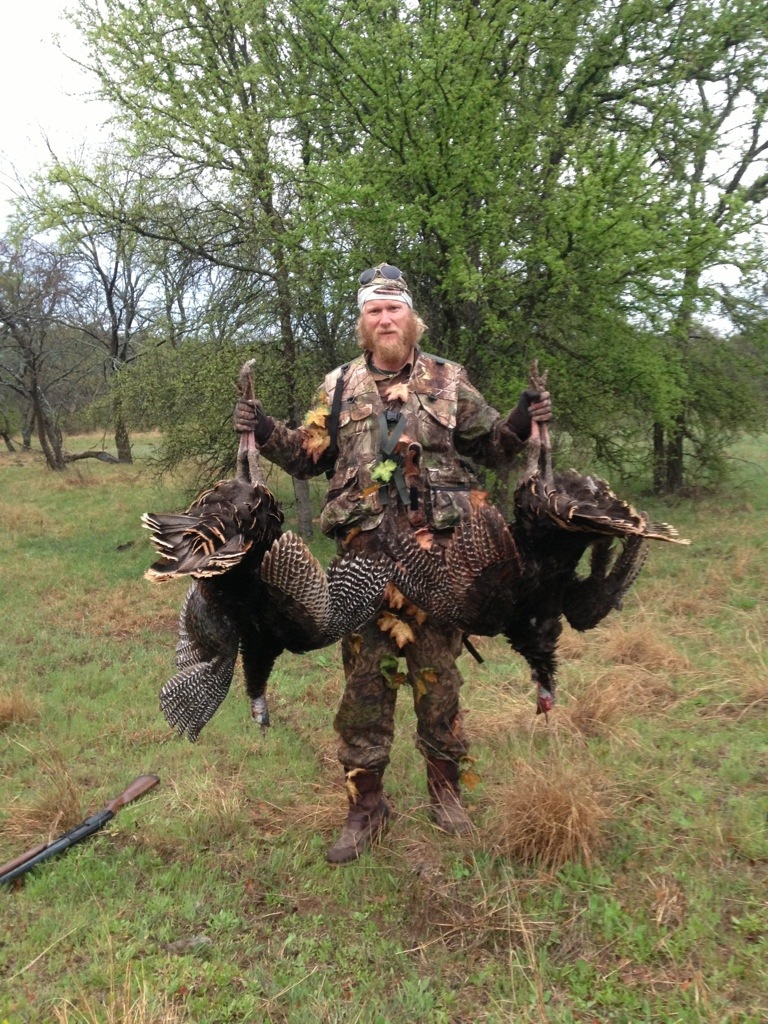 We had to stop and eat and its nothing you haven’t seen on this site before but I’m gonna post it up anyway. Howells cafe omelette, biscuits and gravy, hash browns, sweet tea and coffee, you know standard breakfast. 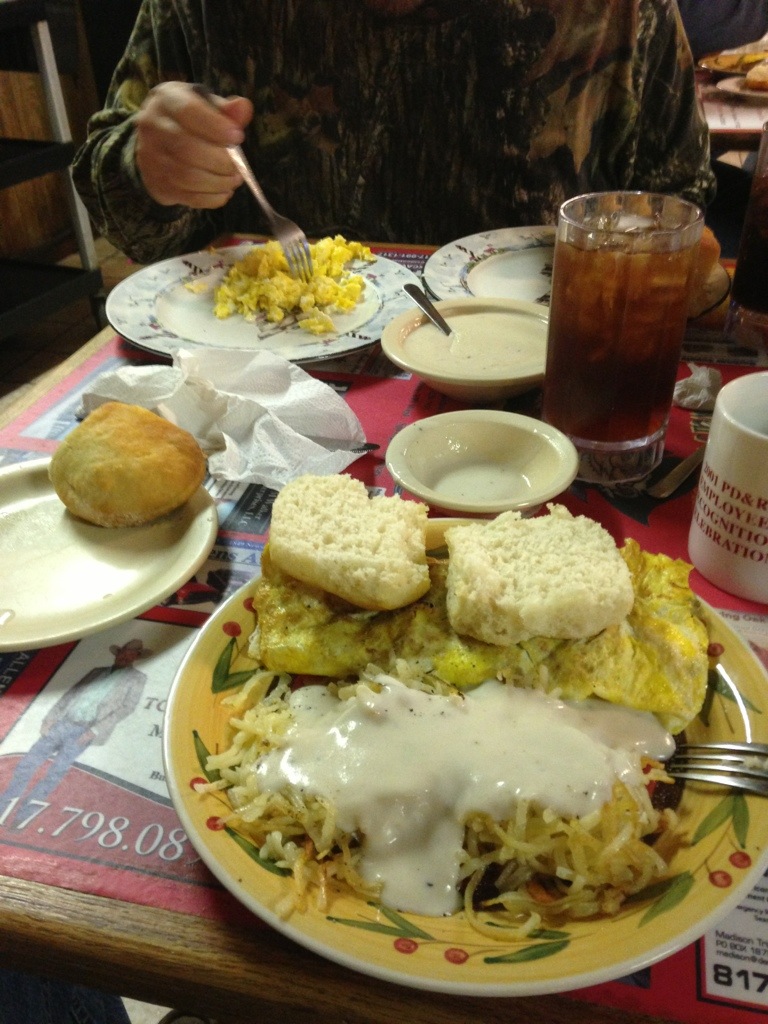 Here’s my “coffee maker” I McGuyvered up. The plate is holding the cup with holes in the bottom above my coffee cup. The cup with holes has a filter and coffee in it, then I heated up water and poured it through the top and coffee came out the bottom into my cup and it was pretty good coffee. Not bad at all for a guy who hadn’t had his coffee yet when he thought it up. I plan to have my coffee pot next time though and coffee or no coffee I bet I will still love and hate those turkeys in the same day. 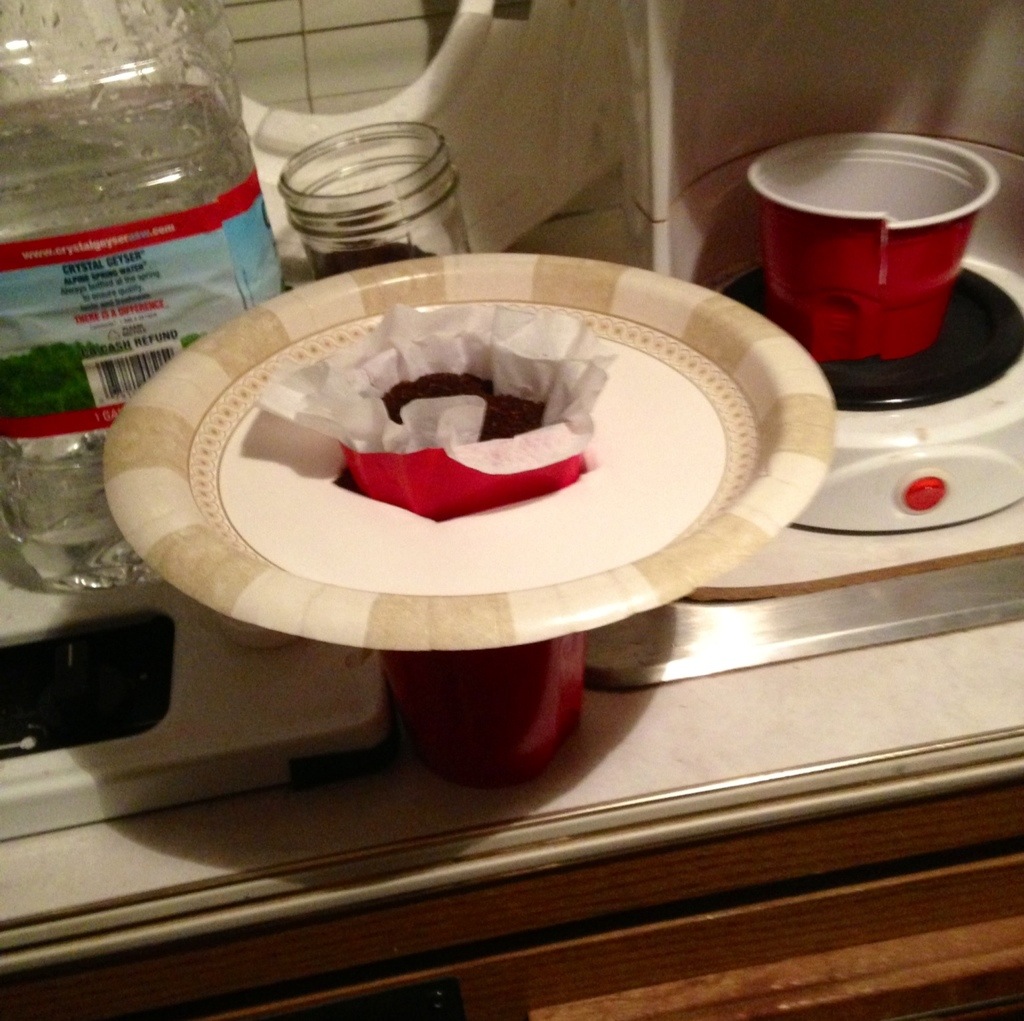