I’ve been having trouble with the coons over the deer season tearing up everything I own so I decided to thin them out a little. I haven’t ran traps in several years and usually shoot enough coons with my bow to keep them in check but this year the population exploded for some reason.
The old timers say its from the drought and after the explanation they gave I believe them. They say that because of the drought all of the stock tanks are low and the fish and frogs become easy pickins for the coons and they get fatter and have bigger litters of babies. I guess they are right, either way I had work to do.
Got in late Friday night and set traps in the dark until way after my bed time. I got to bed and had dreams of skinning coons until noon the next day I would have so many. Like most of my dreams that involve wildlife the wildlife don’t seem to follow the plan and I had a dry run on Saturday morning so without a coon to skin I took my frustrations out on several downed trees that needed to be turned into fire wood. 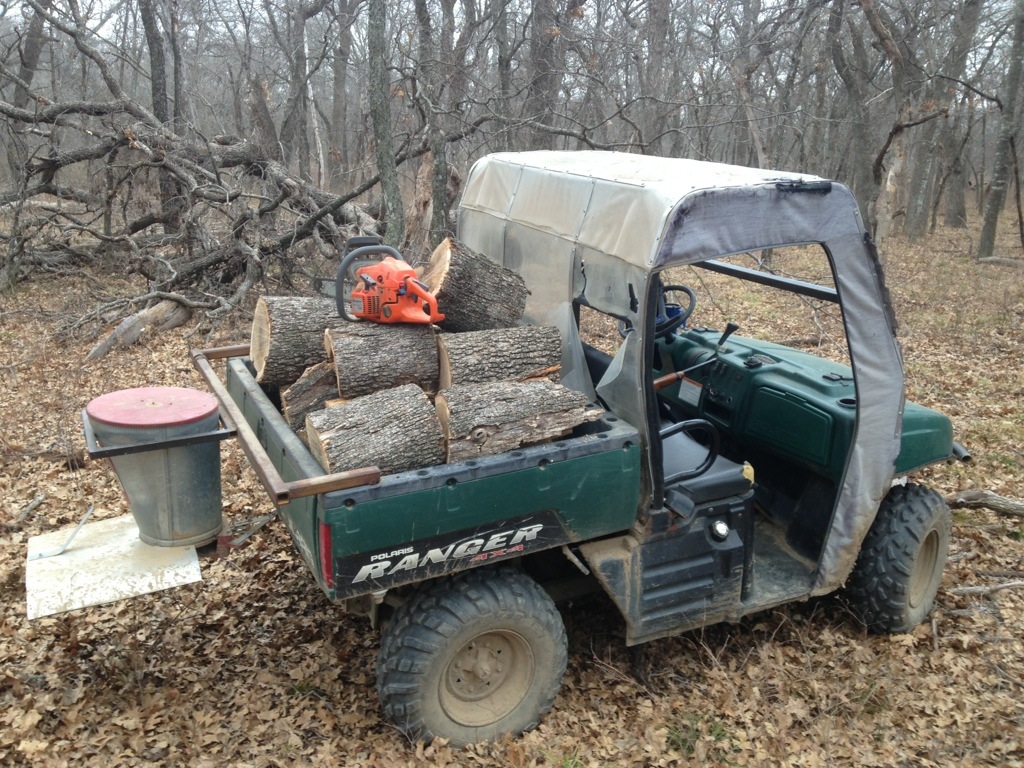 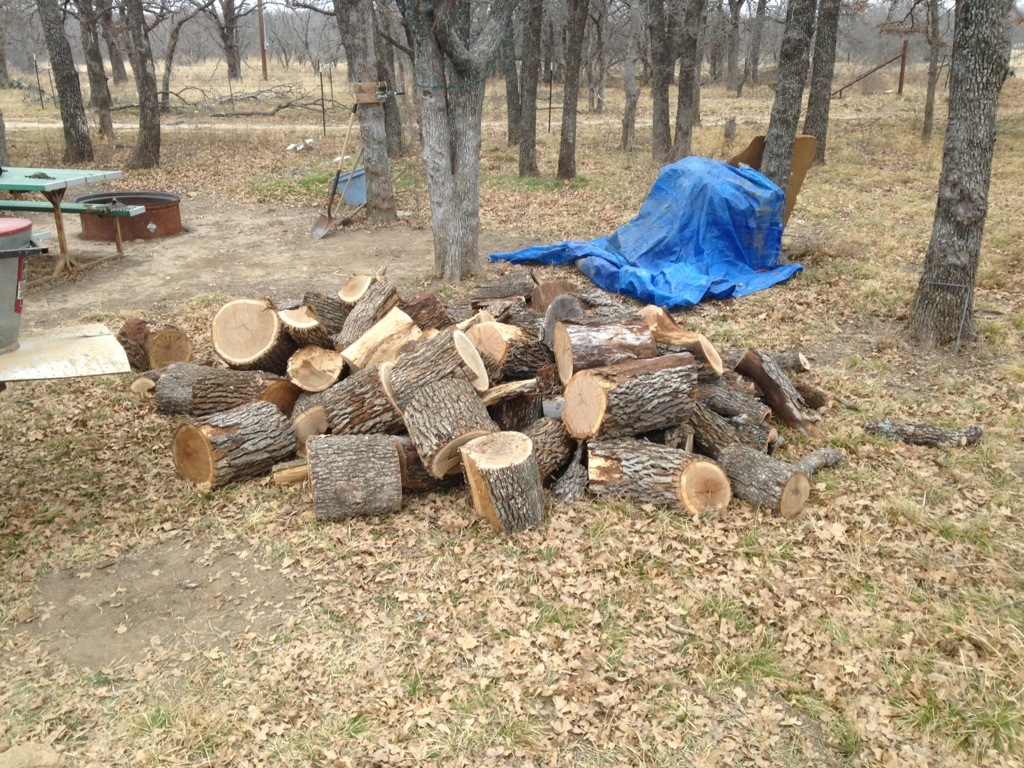 I’d cut awhile and haul awhile then cut some more then take a break. Nate came over and helped and then we made a few calling sets to try to add a bobcat or coyote to our furs but that was time wasted as we never seen a hair.
I was cold and needed food so we drove the 15 miles to Bryson, TX to Cottons Cafe. My enchiladas were average but Nate had a chili relleno that was as good as Ive ever eaten. I would suggest it if you go to Cottons. After that I went back to camp and made sure my traps were still good to go and I waited for morning. 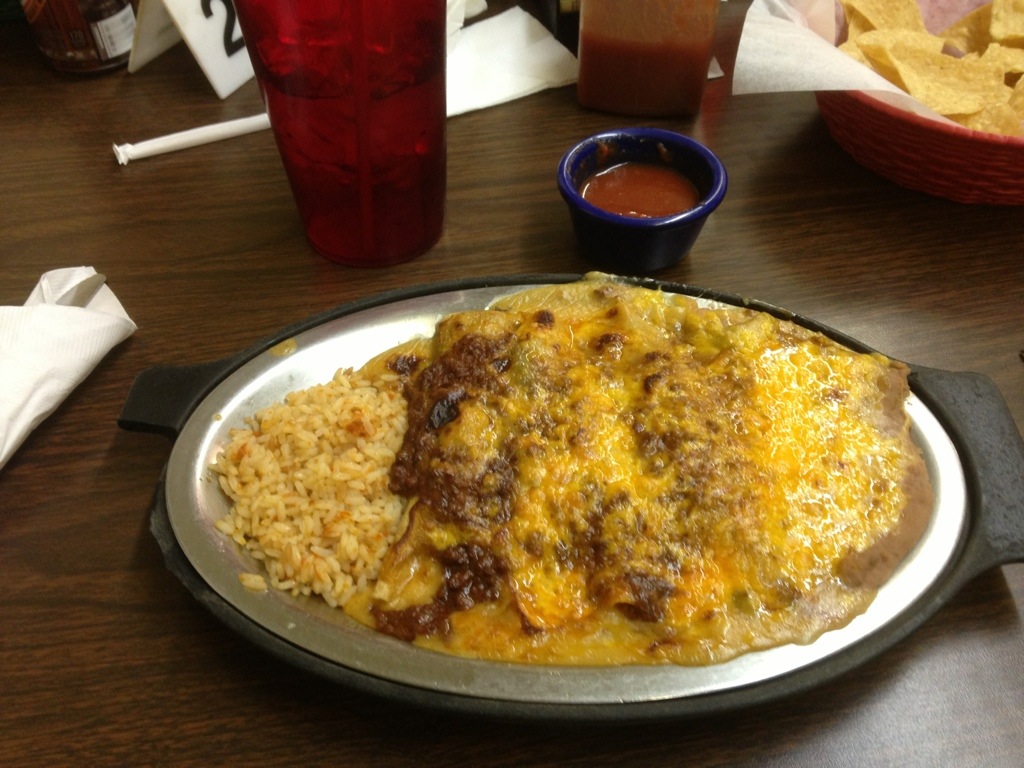 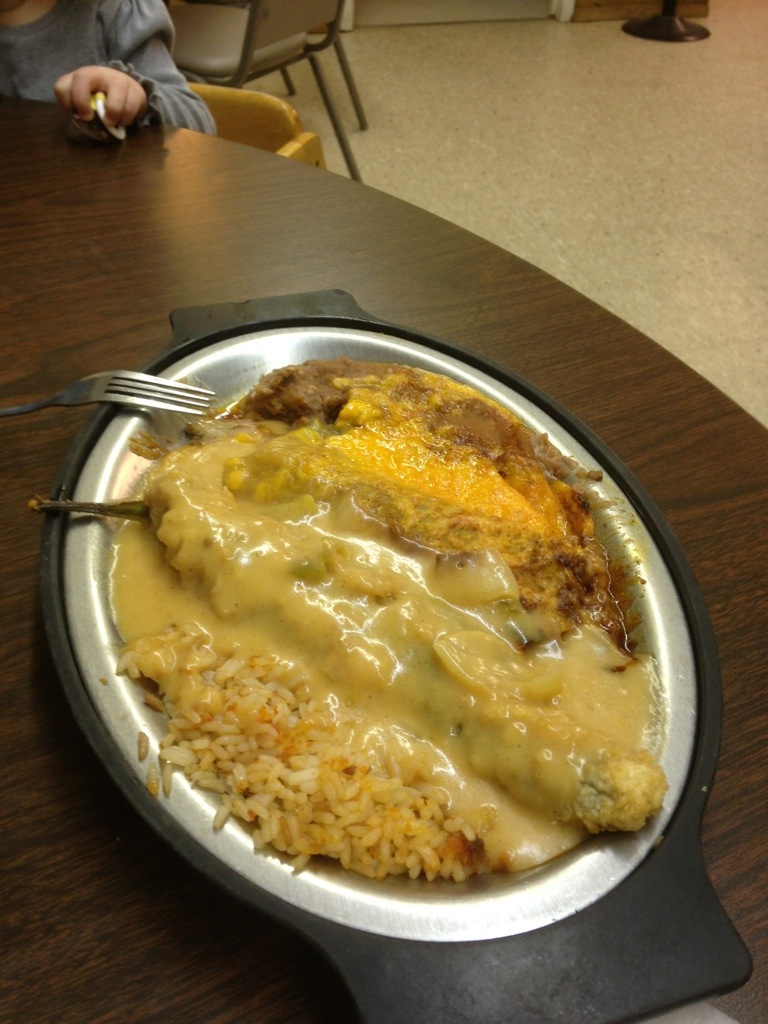 I don’t mind trapping and understand why it needs to be done and I hope every trapper’s fur shed stays full, but over the years its lost a little of its appeal to me but I awoke early and excited to check traps. I woke up at 4:30 am to a pounding rain which didn’t surprise me much as I always seem to have some weather when I’m out, but at 5:30 it turned to sleet and started sticking. I could hear the wind howling and my little heater wasn’t keeping up the temp in the camper any more so I knew I was in for a cold morning. I got on the Ranger and as I drove the ice was hitting my face so hard I had to hold my hand over my face and play peek-a-boo with the road to get around, it was miserable. I started to question why I do things like this but I figure it gives me character and makes me tough, at least that’s how I convinced myself I wasn’t insane for being out there. I got to my first trap site and luck was on my side, a nice little ring tailed bandit was looking back at me. I took care of him, pulled the trap and was on to the next spot. I had four traps here pretty close together, too close apparently because one coon had managed to get caught in two traps, but I picked up two more nice furs here. The next two spots were a ways away so I ditched the Ranger for my Land Cruiser because I had a mile ride and by this point the ice was unbearable on my face and I was mostly numb because the ice had been going down my collar steady all morning as most of trapping work is done bent over. It was nice to have some heat going as I approached the next spot, two for two here, I was rolling along. On the way to the next site I had four traps and just knew for sure I would have two more coons but what I had was four frozen traps. The triggers had frozen and bait was taken so they got lucky this time but I ended the morning with five total so not bad at all. 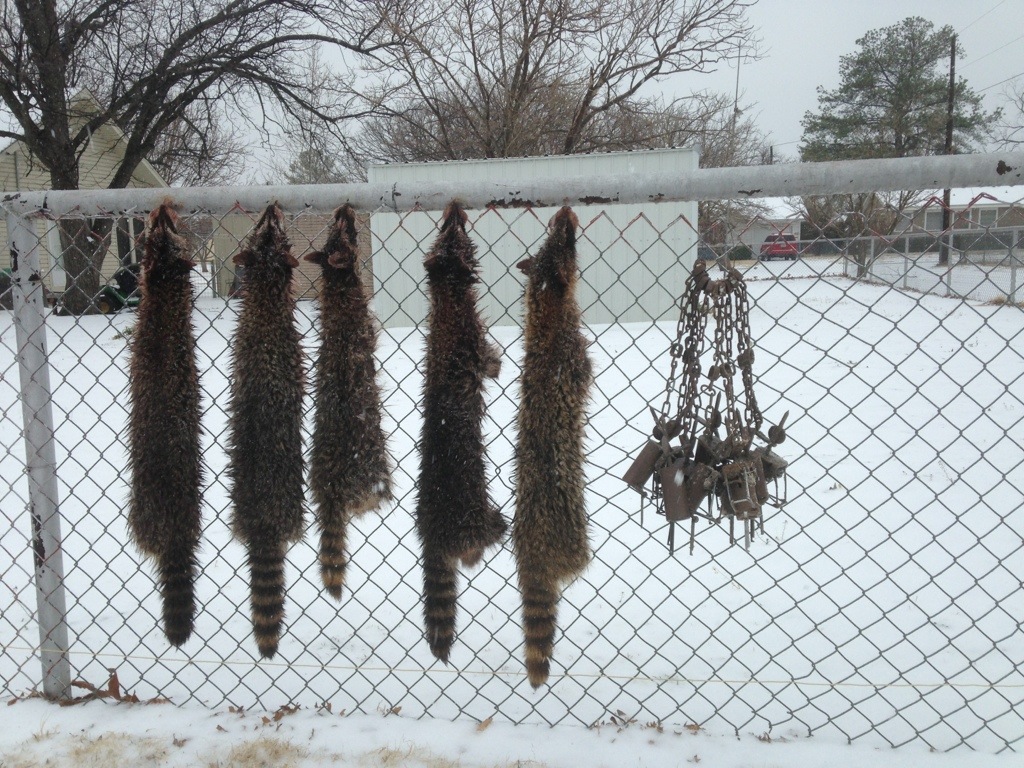 At an average of $10 a piece for these furs it helps a little for gas or corn. Well it makes me think its worth it but the truth is it won’t pay gas for one trip but it is $50 and a good time. I actually had a little more fun than I thought I would and since I know I didn’t even make a small dent in the amount of coons I have I guess I better go back and try again soon. 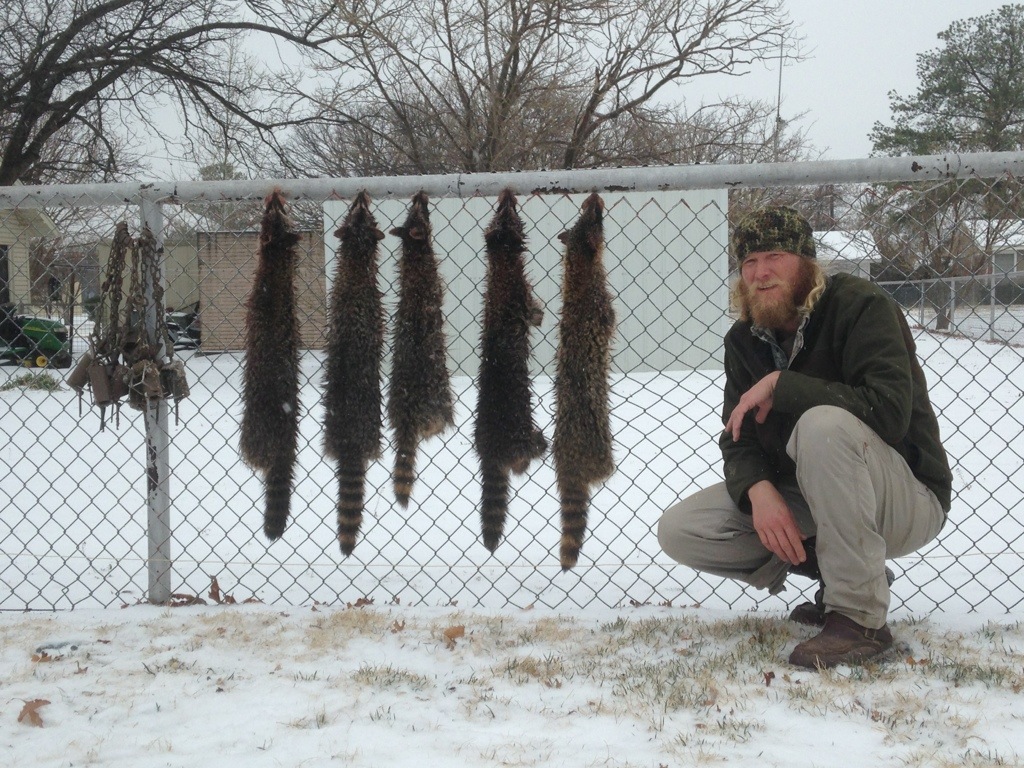 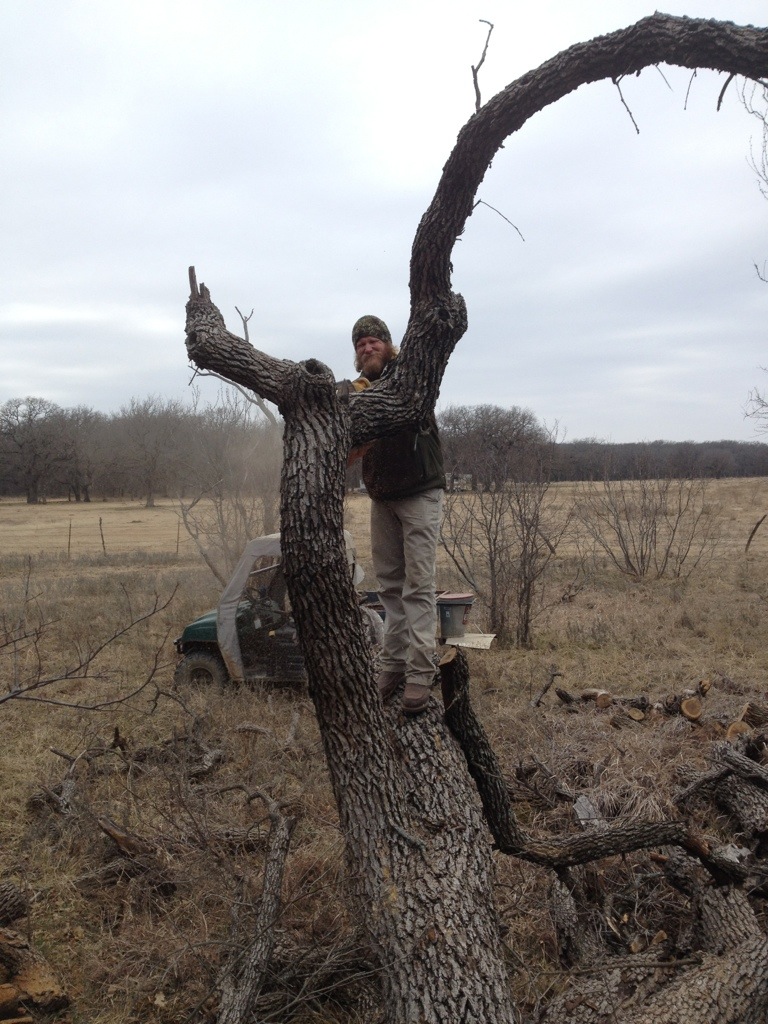 Cutting fire wood in the sky. This tree fell two years ago and is near four feet wide at the trunk. I’m cutting the branches off of it that are about fifty feet from where the tree broke off at the ground. I have no clue how old this tree would be but I would love to have seen some of the things it has seen.