Herds Burger and End of Season

Herds Burger in Jacksboro Texas is an impressive establishment for many reasons but to me the most impressive is that they have been cooking burgers for almost 100 years. They do not do hot dogs or tacos or even French fries, you get a burger and chips in a small bag and a drink from the cooler. I have to guess that at least half of the blockage in my arteries has to be from Herds. I’ve eaten burgers all over and I mean probably 20 states. I’ve had chili burgers, California burgers, BBQ, bacon, turkey, you name it and the Herds double double is by far my favorite. There’s magic in there, I don’t know what or how but its greatness.
The grill is worn out and not level and doesn’t look big enough to make a dozen burgers, let alone the hundreds that they pump out everyday and there’s only one guy cooking. I think he’s the third generation. I remember his dad cooking in there and he was old then and not long ago I stepped in to order there was the old man Herd, who cooked burgers there for 50 years and he’s ordering burgers from his aging son, that should tell you something.
Ill try to explain how they cook this little patty of heaven. On the side of the grill is a pile of hamburger meat, by pile I mean five plus pounds, just sitting there slowing cooking through. The bottom of this pile is getting a little crust on it and when the order is made, which is a girl at the counter yelling back to the cook, he takes a spatula and cuts into the ball of meat just above the line on the bottom that is done and drags out a patty size piece. This is formed into a kinda patty with a spatula and then flipped over to cook on the other side. Its never touched by hands and is kind of a loose patty that has a little crisp on it. Then it gets slid to the side of the grill where its put on the bun which has been sitting on the opposite side of the grill. The ladies grab it up make the burger and its wrapped and thrown in your sack with your name on it.
You can eat inside on some school desk and scattered crates and boxes or go outside to the picnic table or what we prefer is letting down my tailgate and sitting right in the parking lot and watch the cars go by. I know that doesn’t sound all that special but believe me when I tell you its one of the best burgers you’ll ever eat. I always take guys that come hunt with me there and they agree that’s it great but nobody can say exactly what makes it great it just is. 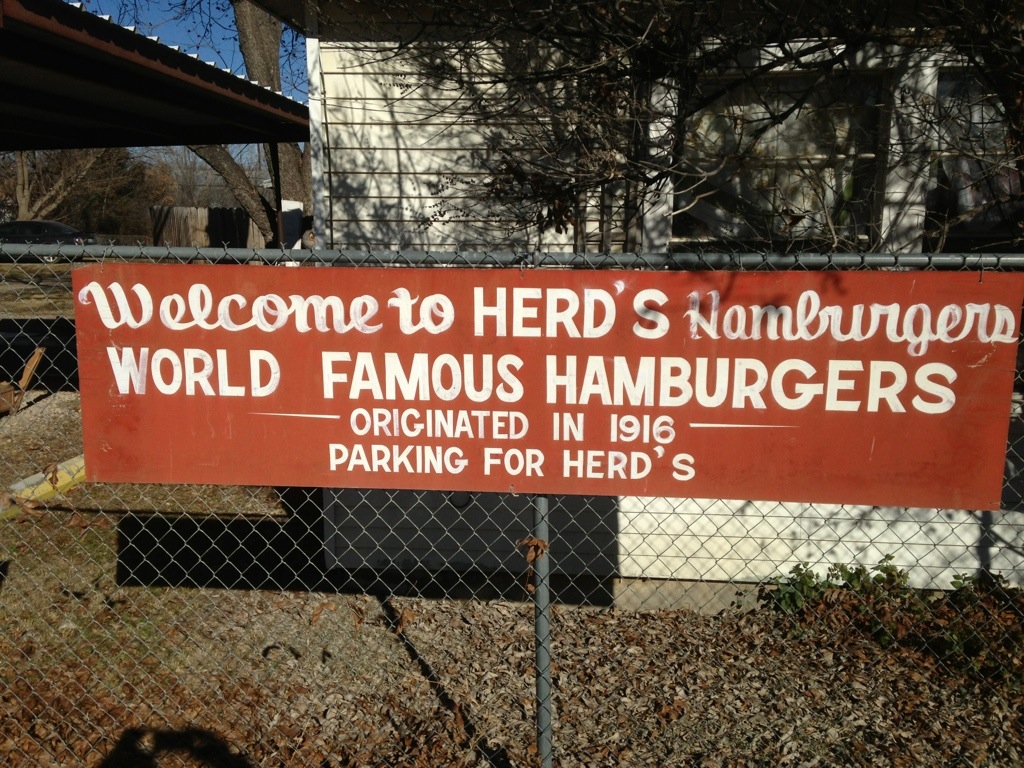 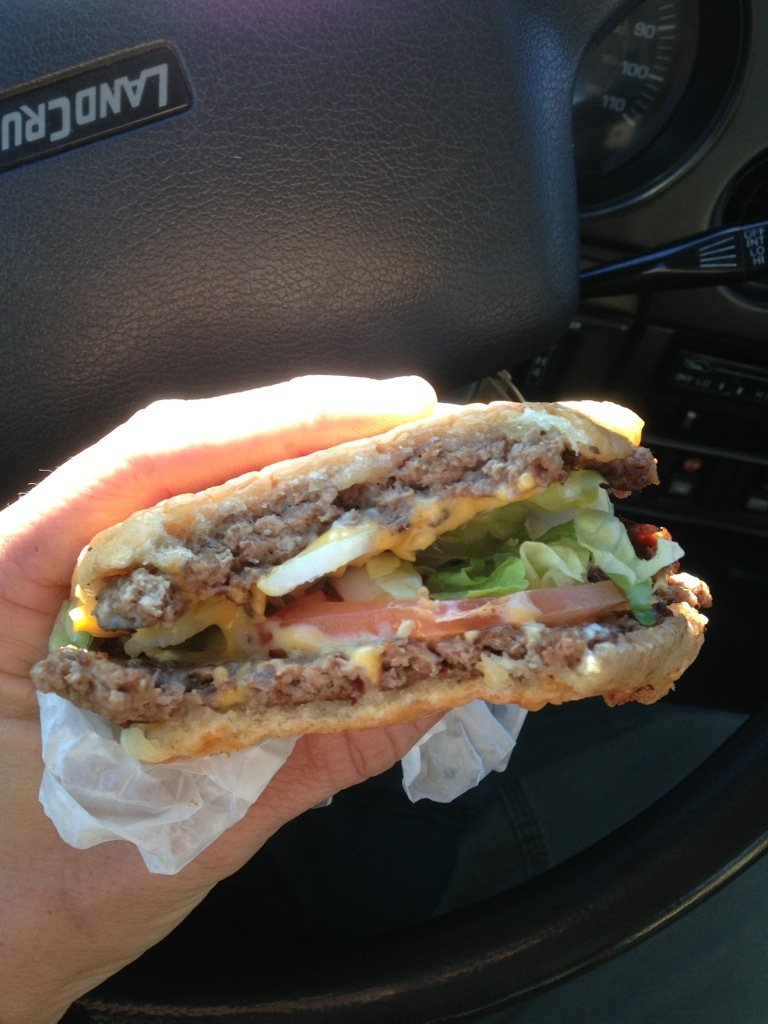 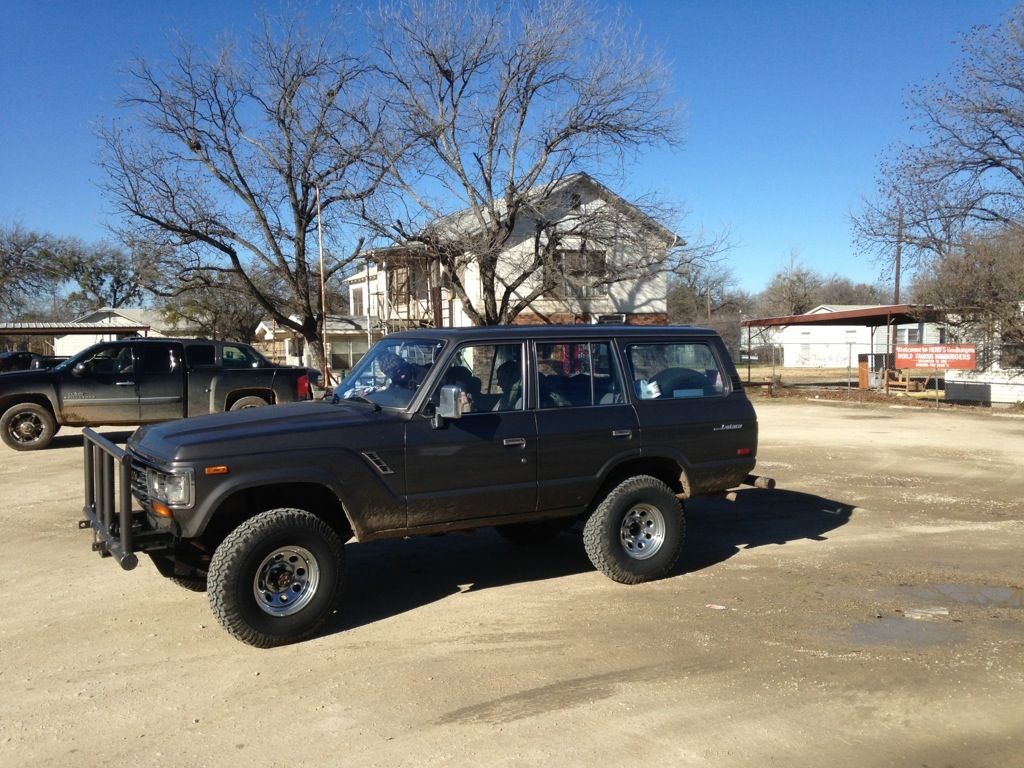 That’s my new ride in front of Herds, its just a little room on the bottom story of that building.

After Herds is a good time to nap but we have no time for that its the last weekend of deer season and Alex still hasn’t gotten a deer with his bow and Braden hasn’t gotten a deer all year. We got in just before dark and I grabbed a rifle and a light and went one way and Alex and Braden did the same and went the opposite way. This has been the worst deer season for us I can remember and the hogs just aren’t coming in day light hours so we were going nocturnal.
The moon was full and would be up shining bright at about 7:20 so I thought we had a decent chance of seeing hogs. The moon did its part, at 7:40 it looked like day light out and I could see plenty well enough to pick out any passing critter. The problem is the only critter that passed was a pale faced grinner (possum) and by 10:00 o’clock I’d had enough. I got to camp to a roaring fire that Alex had made, I taught him well, and I warmed up a little before bed.
There’s something a little bit sad about waking up on the last Saturday of deer season. I don’t really stop hunting when deer seasons over but the thought of not being able to take one kinda makes me sad but the way this season has gone I’m not too upset about it. I get to start over next year and maybe the oilfield traffic will have slowed down on our place and the deer will be back to normal.
We all grabbed our bows and went our separate ways and early reports were not good. The text starting coming in from the boys early about no activity. Alex was loosing confidence in all our spots and he starting getting out earlier each sitting. Late morning we went to town to eat and got some groceries. I had a few things to fix so we spent the day working on a gate and wench and at 2 o’clock Alex grabbed two guns two lights and said, see y’all in the morning. He told us he was gonna sit as long as he could for a pig and he may stay the night.
Braden and I took a rifle to the least likely spot I could think of to see a deer, right next to the well location. There’s tanks and trucks and smells and noise and we haven’t seen a deer near it in a month but I figured what the hell, there’s a full moon, deer ain’t moving, the sun is all wrong for evening hunt here so why not. It worked, I don’t know how, maybe the hunting gods just said, look at these poor guys they are trying, and they threw us a bone. Just as the sun got directly in our eyes Braden says he sees movement, I ask, “like a deer, a live animal with hair on it and everything?” He says yeah and there’s two, holy smokes Im a good guide, I mean Im lucky. It was a race between the sun getting behind the hill and the deer getting to the brush and lucky for us it was a tall hill. Braden said he was on her and I knew she was a step away from getting behind the tree so I told him stay on her and I stopped her by whistling. She stopped and looked back and Braden smacked her. I knew the shot was back but she was quartering some so I thought it would be ok. She got through the trees and I seen her again and she was humped up like a gut shot and bedded down right near where we had parked. We had no way of getting out of there without jumping her up and I knew she needed time to die but as much as we tried to get by she jumped and was gone.
I figured we could find her in the morning but tracking that night would have been foolish as we had already jumped her once and I found some blood but also some stomach contents where she bedded. We returned to camp made a huge fire and cooked some sausages and waited for Alex.
At 10 o’clock we heard a shot and both of us got pretty excited about it. We unloaded the Ranger in preparation for loading a hog but when we got to Alex he had shot a coon and said he was just too hungry to stay any longer.

The alarm went off on the last day of deer season and I sprang up, I wasn’t even gonna deer hunt but I didn’t wanna miss it. I grabbed a .22 and was gonna go chase some squirrels around until it got light enough to look for Braden’s deer and let the boys sleep in. About 8:30 I was cold and the squirrels hadn’t gotten up yet so I got the boys moving and we headed to the last place we seen blood.
Its hard to keep teenage boys at a slow enough pace for tracking but I tried to tell them how important it was to not get ahead and turn over leafs and step on blood or we would lose the trail, they did ok. I followed blood about 200 yards from where the shot was and she went down in a creek, I was hoping she couldn’t get out but she did. She came out and crossed a small pasture about another 100 yards wide and bedded down again. Each time she stood up from bed there was less blood and I knew if she wasn’t close it would turn into a body search not a blood trail. A few more yards and she bedded again, the beds were closer together and she was sick we just needed to go slow and look close we would find her. The frost on the grass wasn’t helping and several times I had to get on my hands and knees to find the trail again and then it just stopped. I sent Alex to walk the road to look if she had crossed anywhere and I sent Braden to the thickest surrounding brush near the last blood and told him look under everything she’s not far and I started making circles around the last bed looking for any sign of any kind. About two circles around I found her and she actually had been dead longer than I thought she would have.
The shot was a little back like I thought but it got enough liver and the back of a lung to do the job. She ran a total of about a half mile, not the hardest tracking Ive ever done but it was rewarding that Braden got his deer. 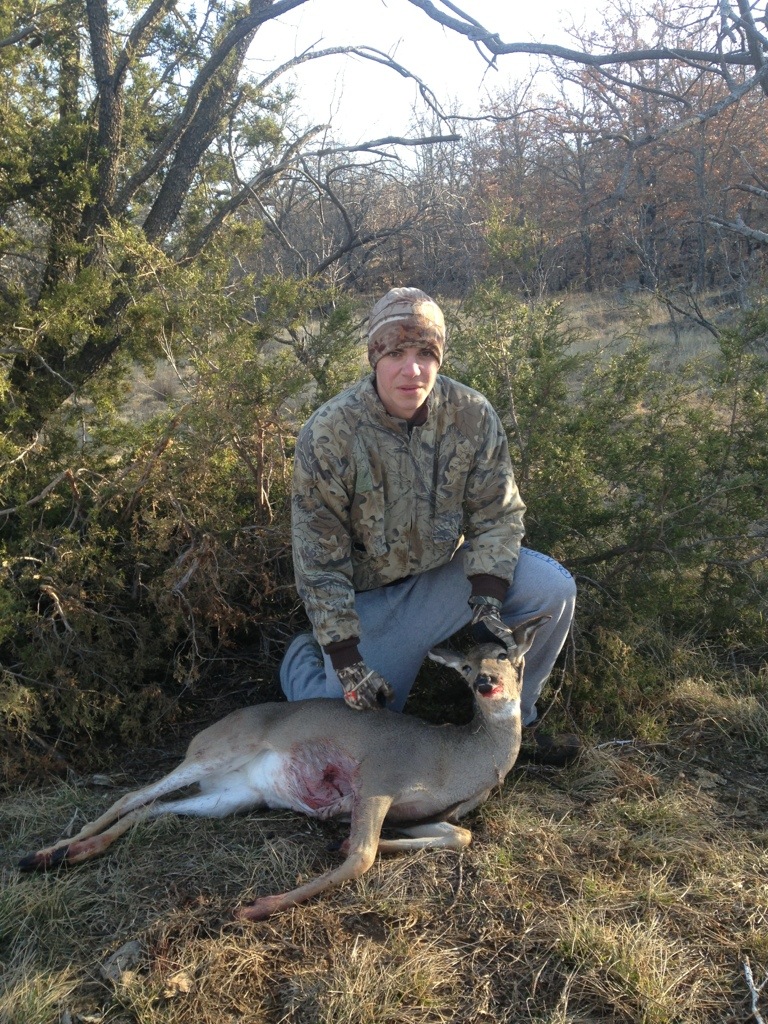 I told the boys I found her and Braden got excited so it was worth it. She was a little frozen in the legs so when we tried to pose her for pictures it looked like she was running, of course they had to take some pictures of that. 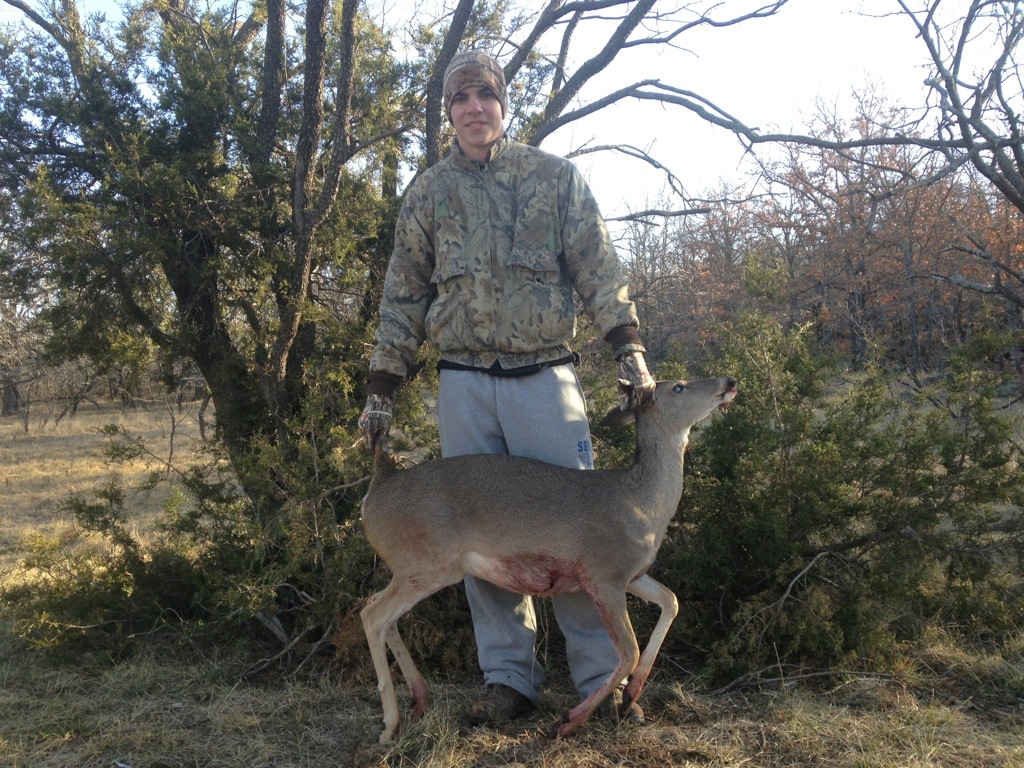 All in all it was an ok trip but over all the season for us was not the best. Starting with New Mexico and my busted ribs and on to Montana for ten days of not finding a buck and then the drilling at our place at home, the only saving grace was the Mertzon hunt where we got four deer. I guess we can start fixing stands and getting ready for next year while we pig hunt and get gear ready to call the turkeys. I love calling turkeys in the spring and hope things are back to normal by then in Jack County.