Alex and I decided to try our luck again so we grabbed gear and pointed the old Dodge west. Got to Jacksboro just in time to slide into Dairy Land before they closed, so I might have planned it that way but given the choice I will always eat at local owned cafes over fast food and I would hate to see one of my favorites close. I do my best to keep them open a 20 dollar bill at a time.
Alex had his usual nachos and I had BBQ ribs, sliced brisket, beans, and potato salad with bread and sweet tea. Now what man would not plan to be at a place for a plate like that? 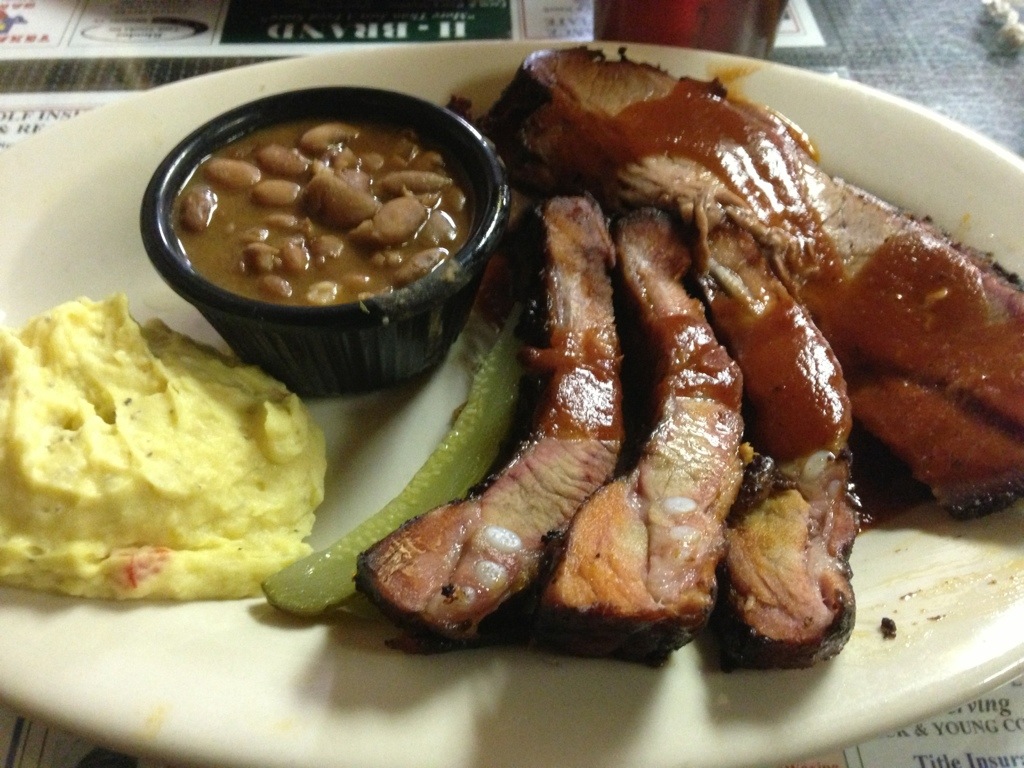 That morning about 1 I heard some rain and by 3 it was a down pour. I thought it would let up at daylight but I was wrong, it only got heavier and by 7 the camp was a flood. Water was running 3″ deep through camp and our fire wood was floating away. We hadn’t even unloaded the truck yet and I told Alex lets just go home. It’ll take two days for this much water to run out of camp, I know from experience. Disappointed we started back home never having even taken out a gun or bow.
I spotted a new but old cafe on the highway the week before so we needed to try it. It was new because they changed the name and new owners opened it but it was old because the building has been there forever and I had eaten there about ten years ago when it was a supper cafe. The new name is the Texas Outlaw Cafe and it was good.
After ordering drinks I ask if the chicken fried steak was frozen or “real” and the waitress although not insulted did answer as if I was asking a question that needed no answer. She looks at me and says its real steak we tenderize and hand batter. Well this day is sure looking up, I said bring me that and fry some eggs too please. 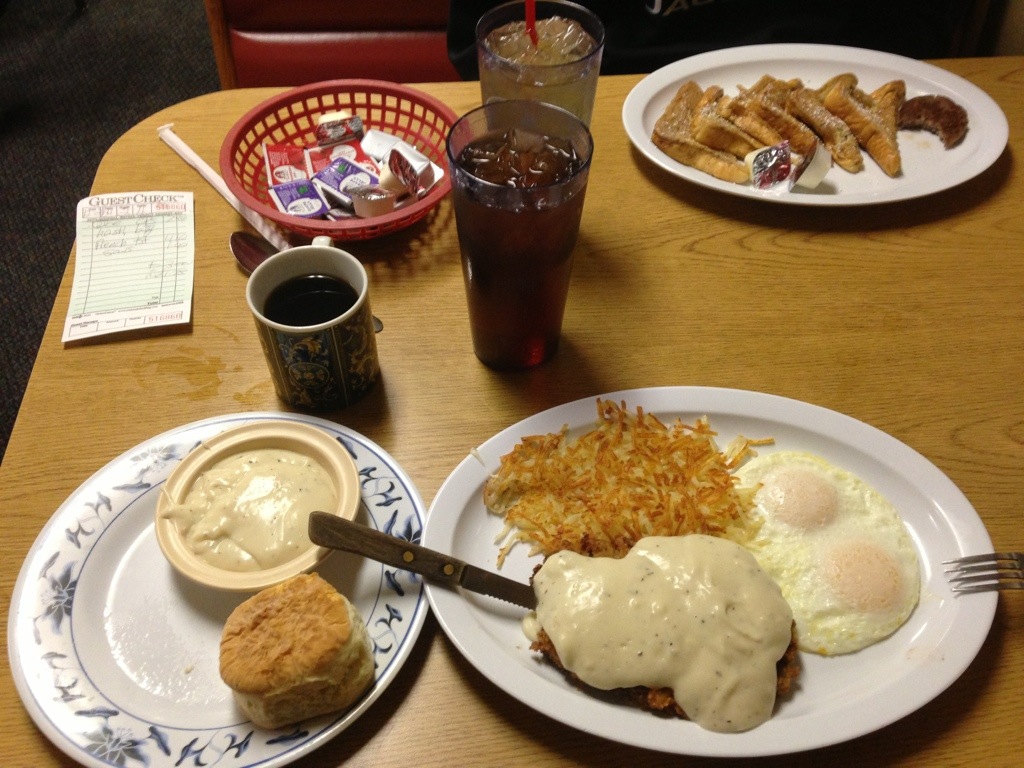 We ate and went home looking to regroup and wait for the water to go down.
Fast forward a week and we are back on the road in a new ride and one more hunter in the group. Alex’s friend Braden is the quarter back at the high school they go too and Braden hasn’t had much hunting time due to that, and him having a new bow I figured we better take him with us. We arrived Christmas Day and hunted that evening. Alex and Braden seen a little hog but couldn’t make it work and I didn’t see a thing. We didn’t have a plan on when to go back home so we just thought we would play it by ear and see how the trip went.
Day two goes by with no deer sightings, day three, day four, this is getting ridiculous. In fifteen years of hunting this same spot I have never been shut out like this. All we could do was keep trying and not give up. We shot ducks during the day to help scratch the itch of a teenagers trigger finger. 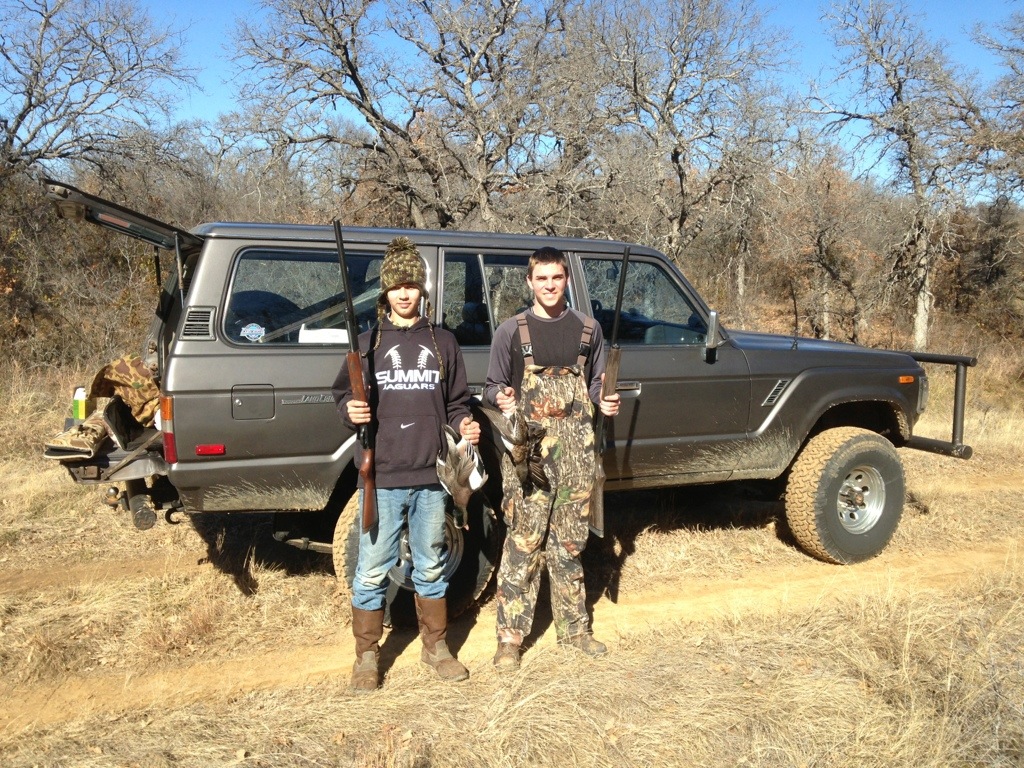 We cooked hot dogs and built big fires at night and the boys did what boys do but we never did kill a deer or hog. 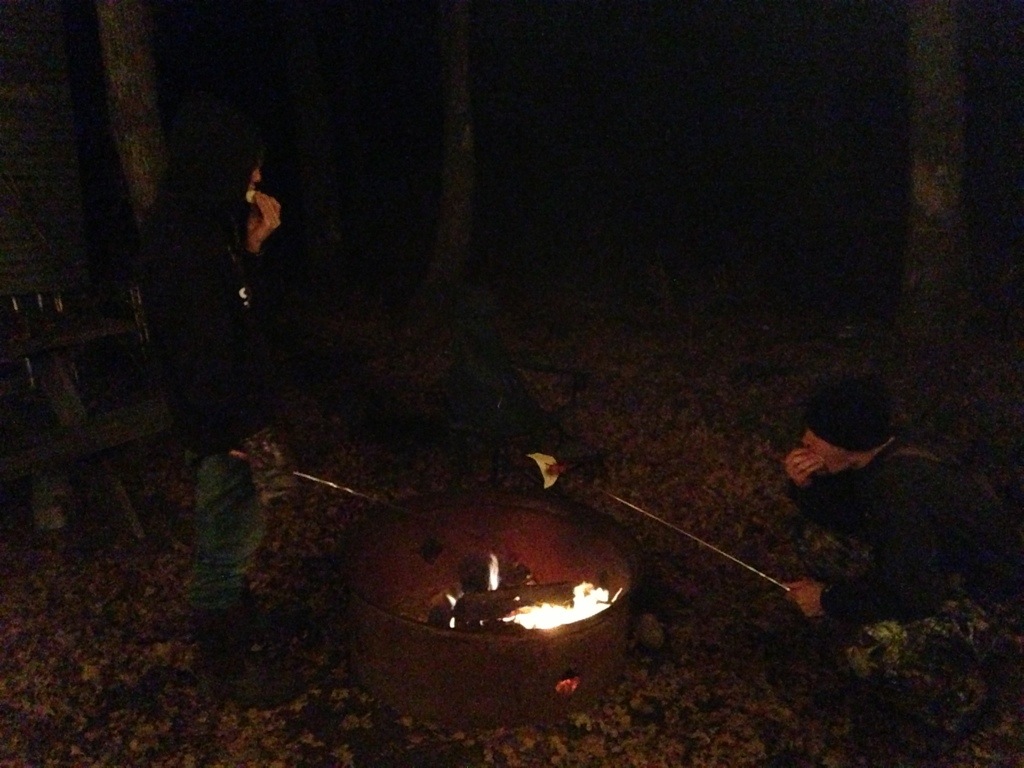 One night we went calling coons and even that was uneventful. We had two show themselves but not for long and we got no shot. That night I laid down reading the adventures of Saxton Pope and Art Young. Pope and Young were on a hunt to acquire grizzly bear specimens for the San Francisco museum and in describing their gear Dr. Pope said they had taken 4 bows and 144 arrows and he said it was the greatest assembly of archery tackle since the Battle of Crercy. Well I was inspired, I got up and started putting arrows together. I found a nock here and a broadhead there, I needed as many arrows as I could find that weren’t my best arrows because I had a war to win. They weren’t grizzlies and I wasn’t hunting in Wyoming but the squirrels of Jack county were about to be under attack. So when it was all said and done I had no less than one dozen arrows for my engagement, not exactly Dr. Pope’s 12 dozen and I wouldn’t be fending off attacking Englishman in the Battle of Crercy but I could put a small dent in the tree rat population and that’s just what I planned to do.
I got to the battle field before daylight and scattered corn on the ground and waited. It had been four days since we got to camp and not having seen a deer I was gonna waste no time in loosing an arrow. The first victim was approaching, its amazing how far away these guys can see corn on the ground, he no longer got feet on the ground from the tree and I sent an arrow his way and the first small victory was mine. Minutes later another one spies my corn lay out and makes his way down the tree but I rushed the shot and shot high. This went on for three hours off and on until I had exhausted all but one of my arrows and only had two squirrels and a crow to show for it. The crow landed and tried to take a bite out of one of my squirrels that were laying dead on the ground. I didn’t feel my shooting was that of Pope and Young but a squirrel is a small fast target and after four days it felt good to give the bow a workout. 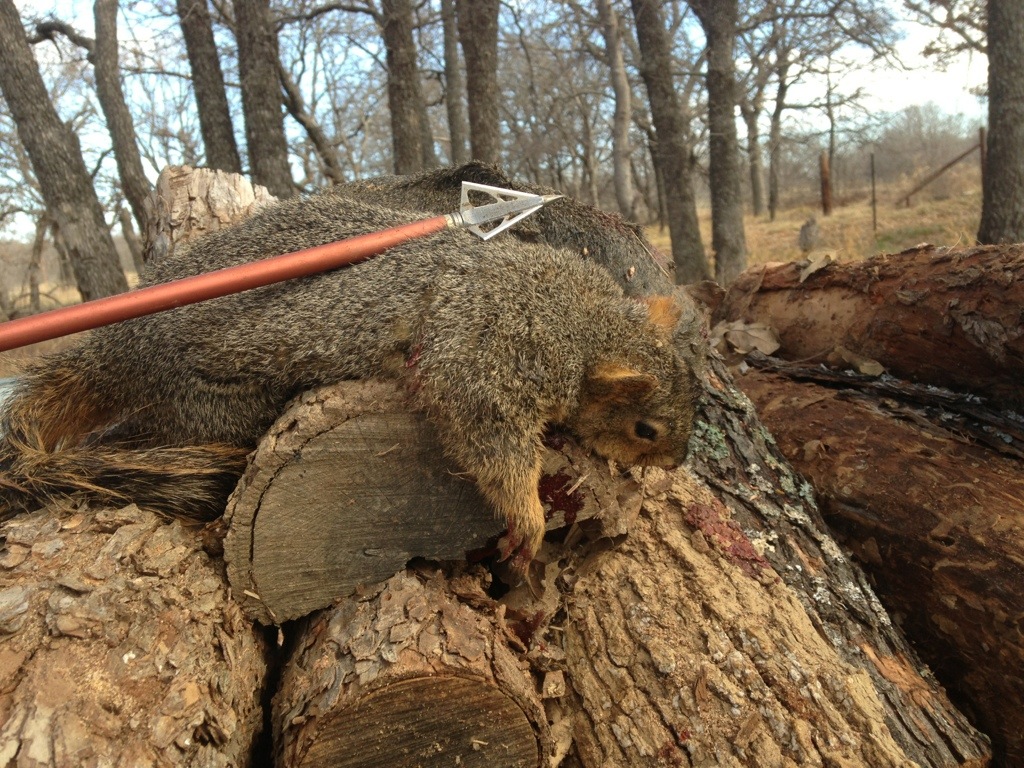 I cleaned the squirrels and we went to check some tanks for ducks. Most of the tanks were froze over in the mornings but by the afternoon they had thawed enough that a few ducks would land. I would shoot at them with a bow and then the boys would clean up the mess. We would only find a few here and there and didn’t clean but four. One particular bird Alex winged and he landed back in the water swimming off. I told him wait until its close to the bank to shoot him again but Alex shot him in the middle of the tank. With no wind or dog it was gonna be awhile before we could get to this bird. I was just thinking of coming back later when Alex stripped down to shorts and let out a yell as he came running down the hill and dove in the water. This water was ice an hour before and couldn’t have been more than 35 degrees but Alex swam it and retrieved his duck. This wasn’t just a few feet out this was probably a forty yard swim out and back. I laughed till it hurt and couldn’t believe he actually did it. Braden told him, “hey man I’m telling people at school don’t mess with you your freaking crazy.” 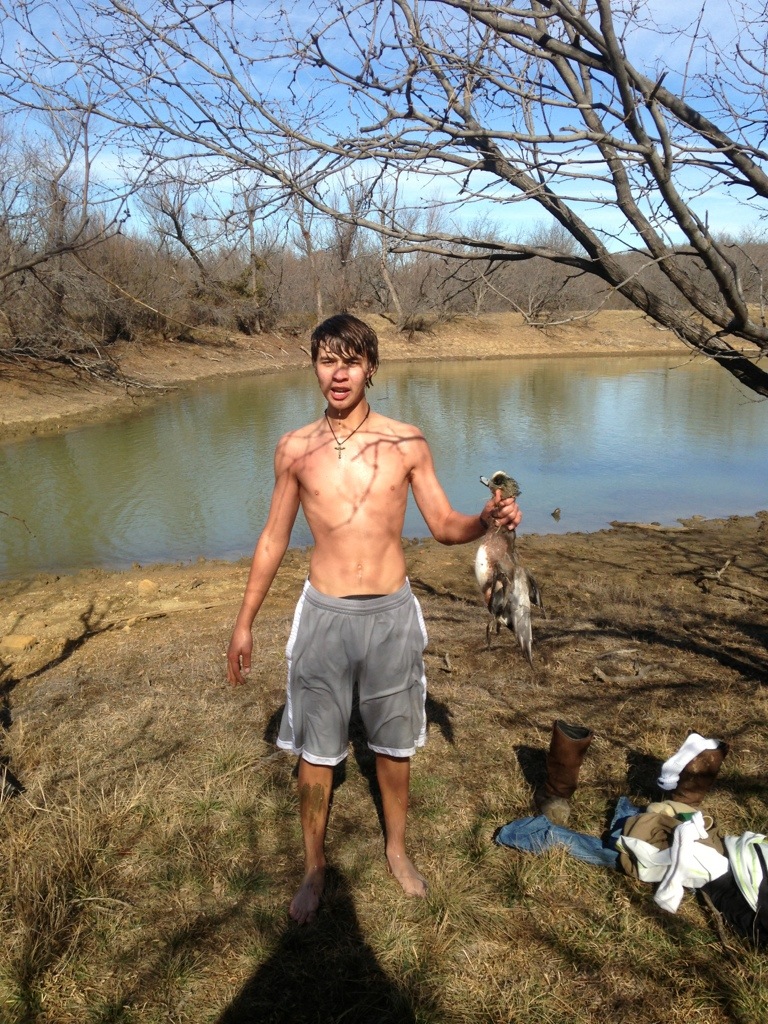 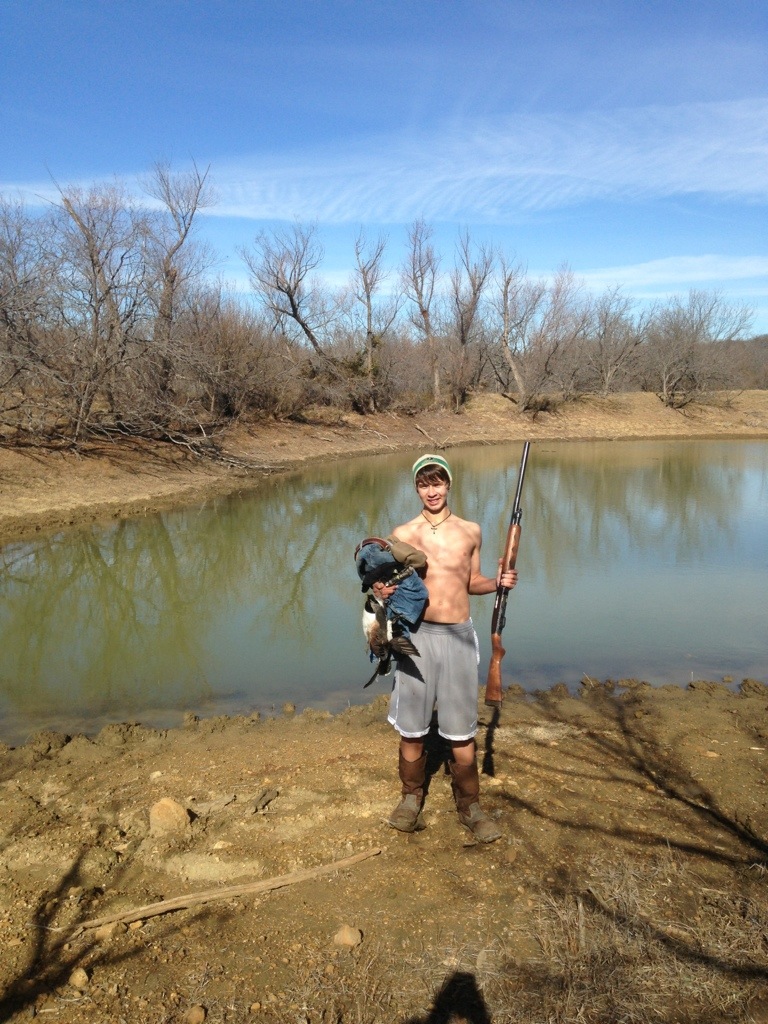 I figured as cold as Alex was he could use a warm up so I made the boys load and unload firewood while I cut. I told them loading wood gets you warm twice, once when loading and once when you burn it. They gave me the usual teenage look of lets just get this over with. They did pretty good. 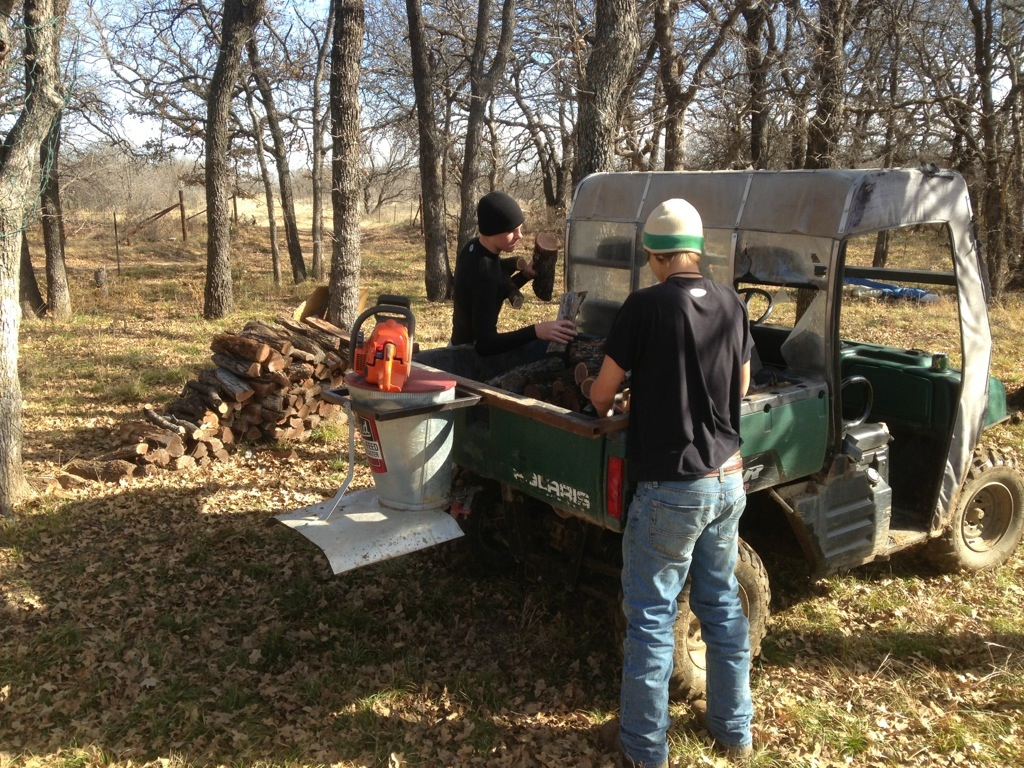 They killed the ducks so they clean the ducks, I know its cold and I made you do some work but you shot em so get after it. 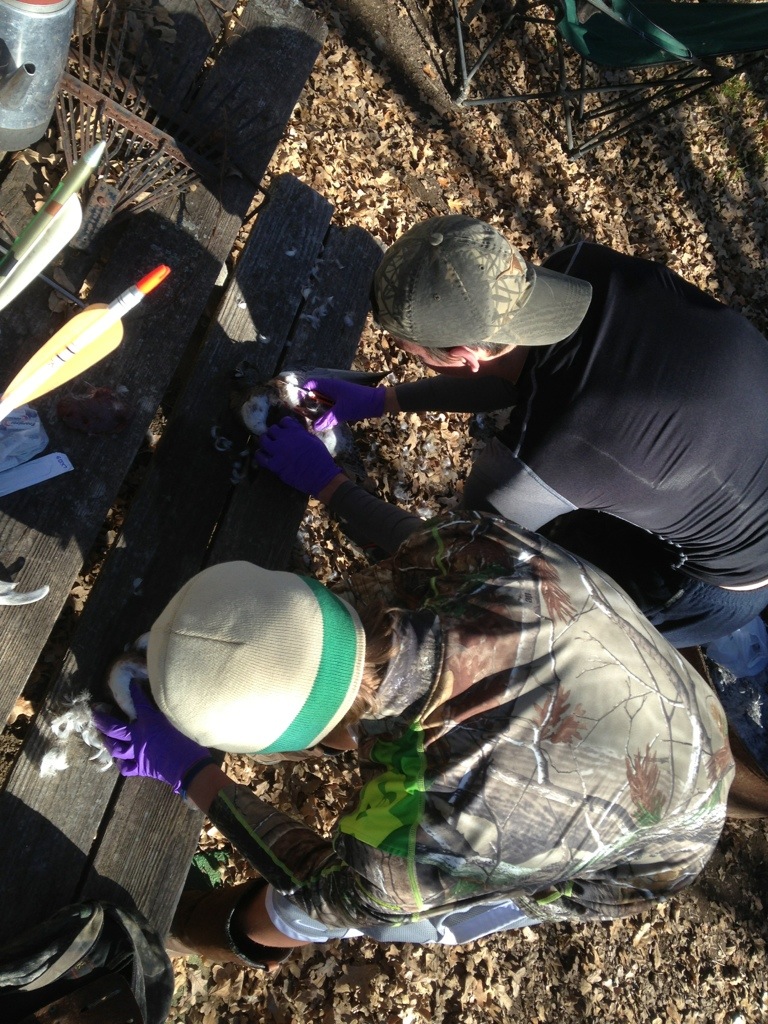 That evening I went for a walk with my bow. I figured it couldn’t hurt at this point to just try to find anything to stalk. I sat on a huge fallen tree and this guy comes walking by digging grubs around the tree. 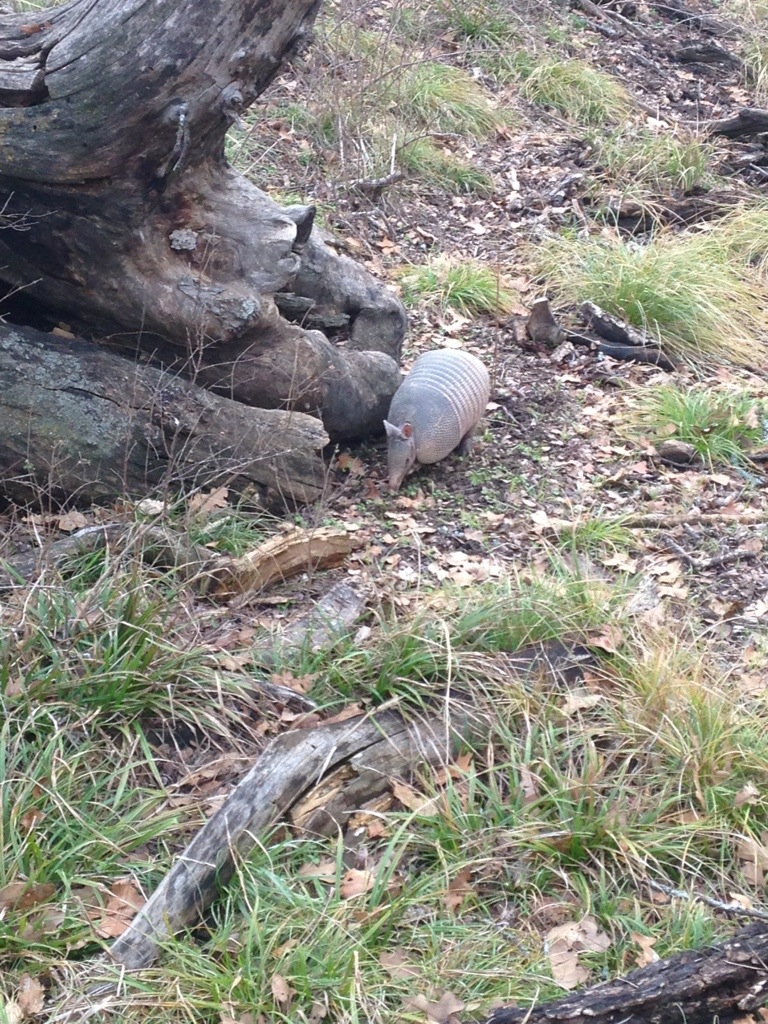 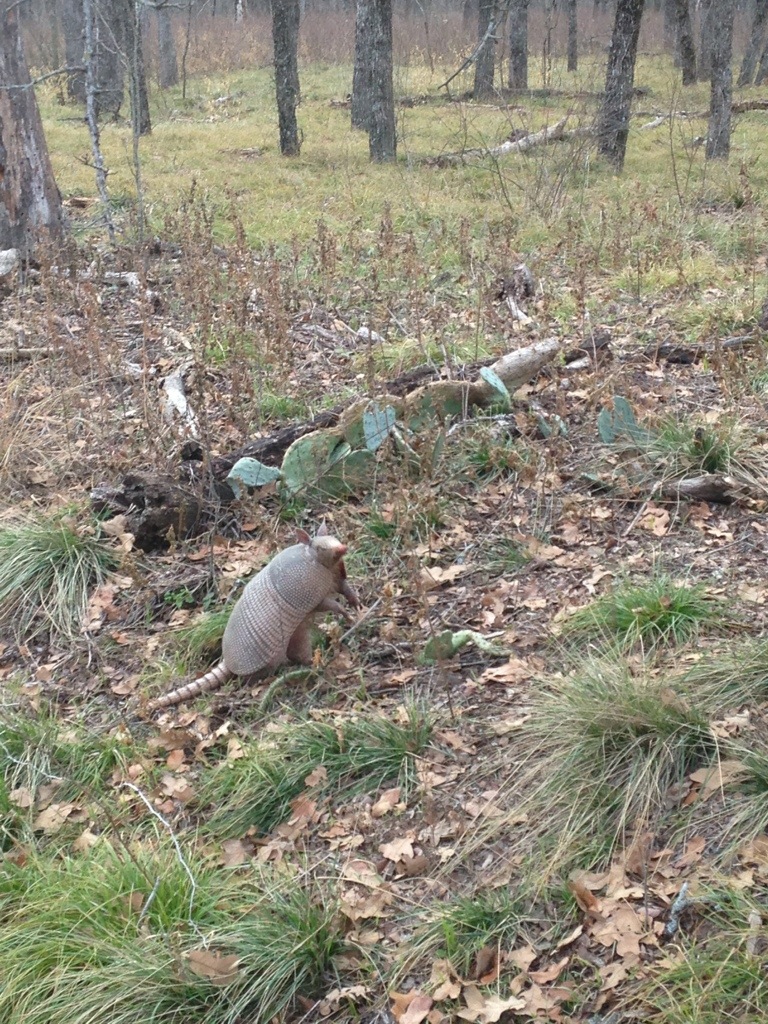 Darkness fell once again and again no deer or hogs or even turkeys. I built a huge fire that night and we cooked, ate and laughed about Alex being a retriever and told stories about baseball and basketball games that the boys had been in.
I woke up to hunt on day five and my two compadres slept in. I knew they were getting tired and this confirmed what I suspected, when Alex don’t get up to hunt its time to go home. I sat for three hours and shot a couple shots at passing squirrels before it started to rain so we broke camp and argued over which cafe to eat at. Howells in Springtown won the argument. 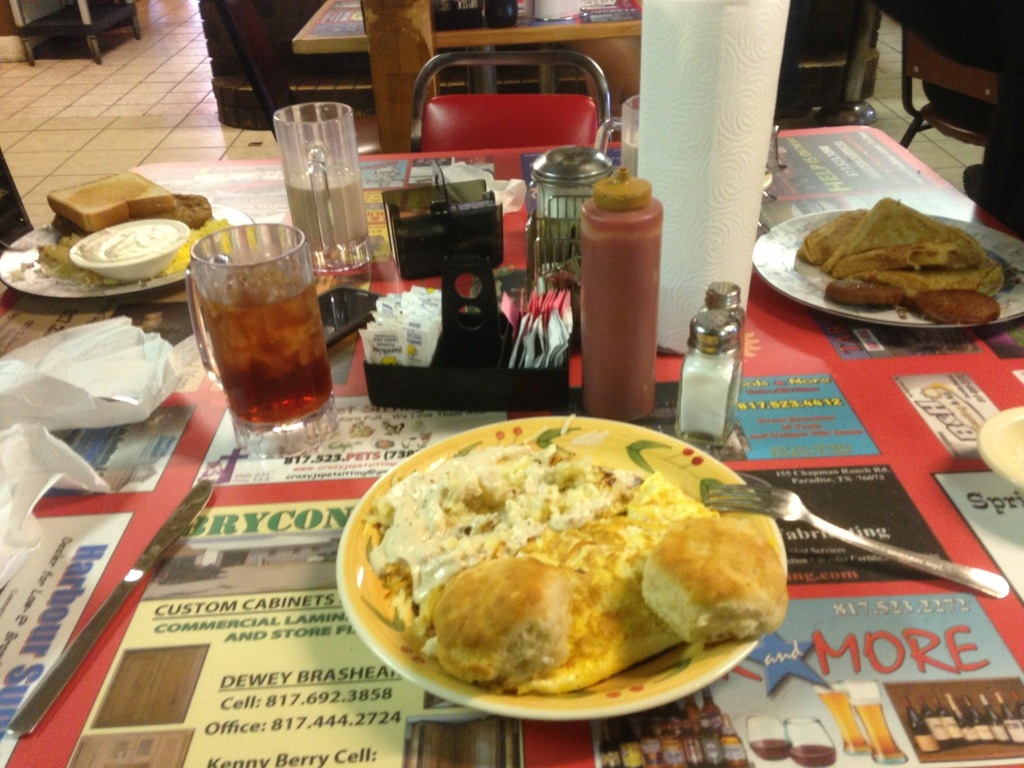 It was as good as it always is and the waitresses were great as usual. I guess after five days of hunting all over the property and having three guys to cover the ground we gave it an honest effort but we just got beat, it happens.

On a side note during the trip we got word that a young man Alex knew and played basketball against in jr high had in recent months turned for the worst. This guy had gotten in a shoot out with police and lost his life. I talked a little bit to the boys about this kind of stuff and even though I don’t ever feel either of these two will be much trouble outside the normal teenage stuff I just wanted to let them know a few things that went wrong with this young man. Its tough to handle and its tough to talk about with kids but I realized about halfway through the conversation I don’t need to say anything else I said all that needed to be said over the last five days. We hunted, we built fires, we worked, we laughed, and cooked and ate and all that was what would keep these boys straight. No conversation I could have would be as effective as the actions of the last five days.