Winter has come to Texas and you would think it was the end of the world. Crazy people buying up all the milk and bread like the cows are gonna freeze to death and its the last gallon that we will ever have. No school Friday so me and Alex decided if this is the end we going out with guns in hand and taking all the deer with us we could.
It rarely snows here, its mostly just ice storms. A few hours of freezing rain followed by temps in the teens and you have yourself a road made for a hockey game. I knew when we left it would be a slow go and I seen no reason to get in too big of a hurry so we loaded up and started the 90 mile trek. I was not prepared for what we got into. First off Texans can’t drive in snow or ice and we know this, we don’t get any practice but if you use your brain and take your time you can get there. What we ran into trying to leave the city was stupid people that can’t drive. Seems when you want to end up in a ditch when driving on ice you should apply brake firmly just before the bridge, we seen two of these. If you began to slide do your best to hold the wheel with both hands turning it every way but lose and yell while applying the brake all the way to the ditch, seen this too. Through the city was dangerous, there’s more cars, but in the country when you hit the ditch there’s no one around to help you out so we just poked along and it took 3 hours to go what is usually a hour and a half trip but that’s ok we arrived in camp without incident. 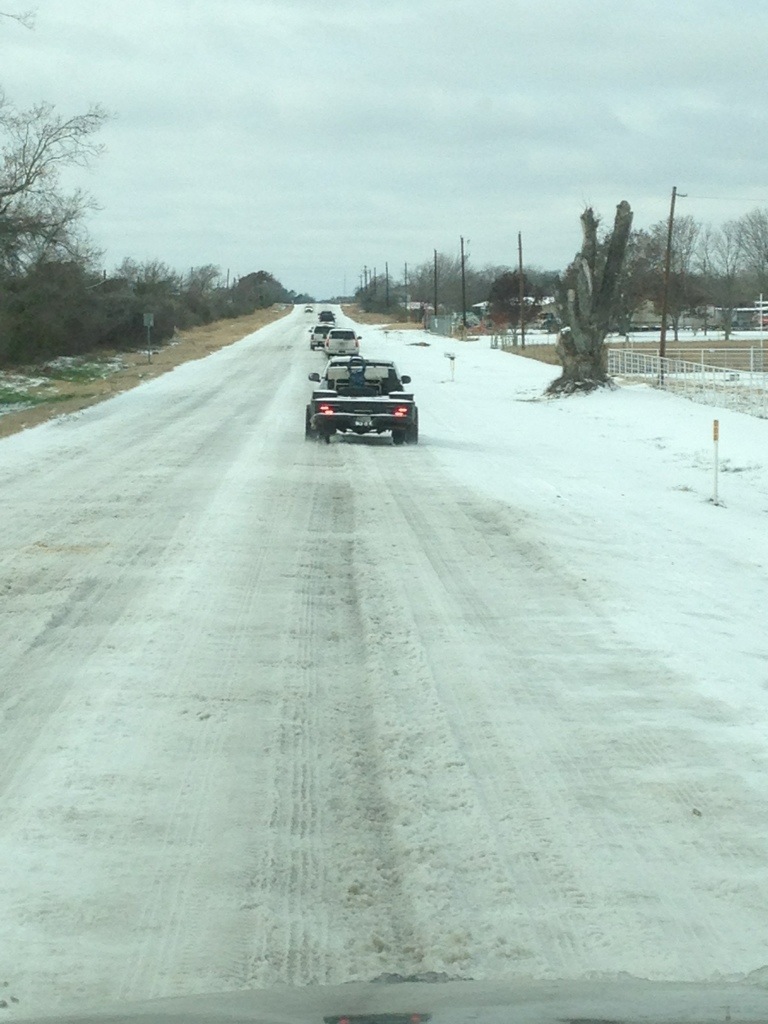 Alex wanted to rifle hunt that evening and I took a bow stand. We both had little heaters but its really not enough to do much but keep your hands warm and try to trick your toes into thinking they can’t be cold because there’s a heater running, it don’t work, my toes were frozen. I had a big mature fork horn come in that I really wanted to shoot but Texas Parks and Wildlife has decided no branch antlered deer with a spread less than 13″ should be shot even if he is a five year old so he got a pass. That’s all the deer I seen but I knew when I heard the cracking echo of the .308 that Alex was carrying that a deer had lost its life and I was right. A couple of doe came in to the food plot for a bite of oats before bed and Alex wasted no time in putting one on the ground. He has shot five times this year and five critters have died. 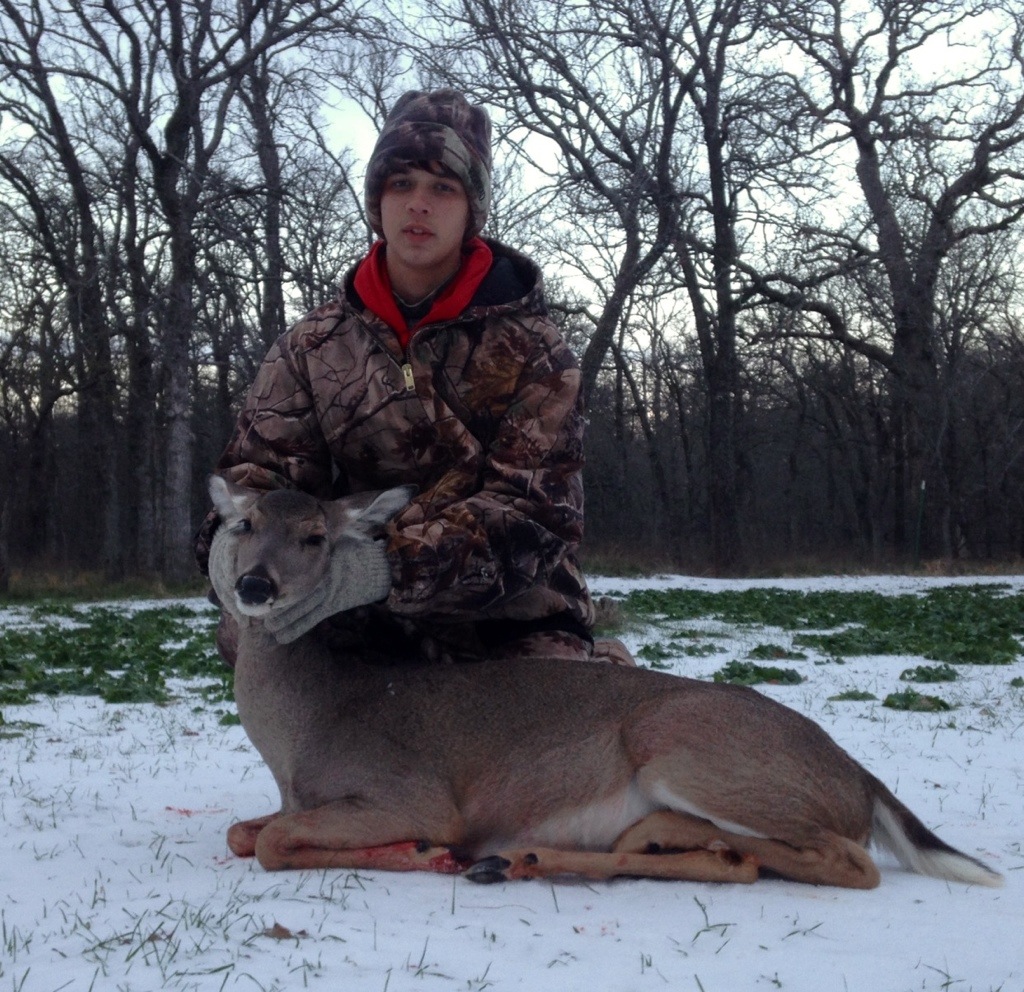 While in the stand I got a text from my cousin Ronnie that he was out of the deer meat I had given him last year and he needed more so I told him come shoot you one then. He got in before dark after a couple hour drive and his truck was mostly covered in ice and had this cool design on the wheels. 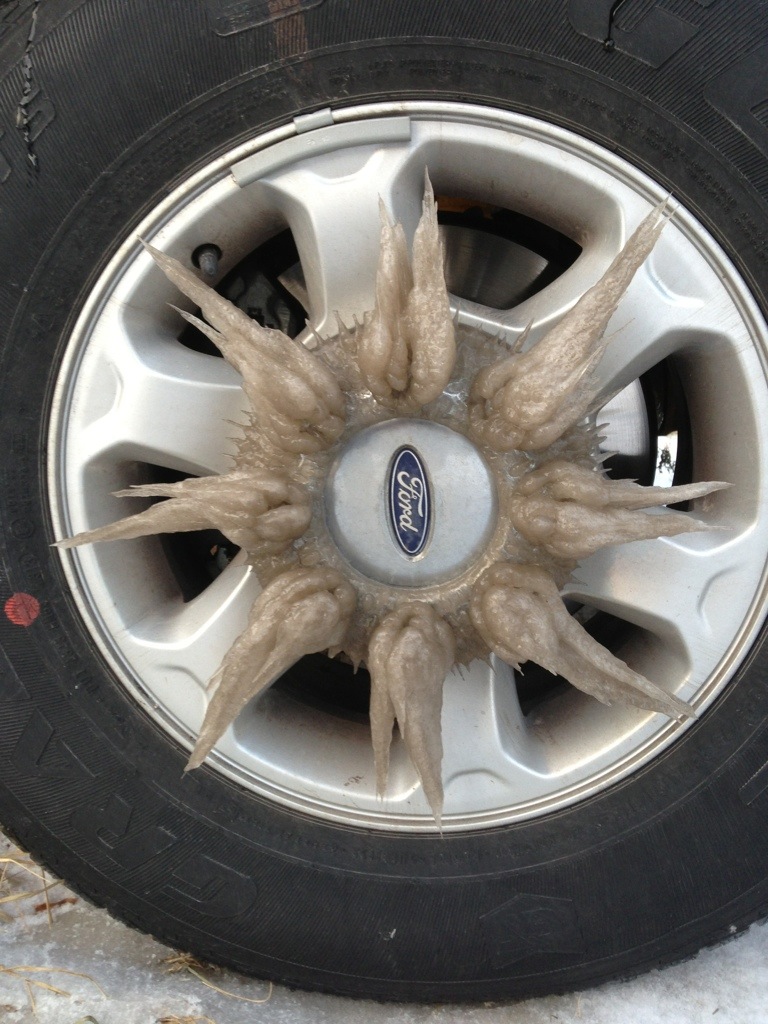 I met him at camp and we went to load Alex’s deer. After the dirty work was done we poked our way into town for some burgers at the Dairy Queen and thaw our feet a little. Plans were made for the next morning and we readied our gear back at camp before bed and hoped the heater in the camper kept the cold at bay enough to sleep.
Saturday morning I started coffee before I woke up Alex and stepped outside. It was a bit brisk for a skinny Texan used to working outside when its 110 but I love the cold and seeing the woods when its white on the ground. A quick check of the thermometer showed 14 degrees, that’s really cold for around here.
Alex would bow hunt this morning and I would go with Ronnie to look for a doe. Alex had the big fork come in again and a eight point that he really thought would make the 13″ minimum but didn’t want to chance it. He said the deer was at 19 yards and he really wanted to shoot it but didn’t want to be in trouble if the deer was too narrow. This situation is the only problem I have with this rule. Here’s a young man that would be just as happy with killing this deer if he was 13″ or 30″ wide. He sat in freezing temps for hours and I say he deserves to shoot this deer but rules are rules and I’m very proud of him for making the decision not to shoot since he was unsure. Texas Parks and Wildlife should look into dropping this rule for the youth hunters in my opinion.
I hate that Alex didn’t get a deer that morning but me and Ronnie had work to do so when a couple doe stepped out I told Ronnie pick out the big one and wait for the others to clear and let it rip. Ronnie was shooting his grand fathers model 70 Winchester in .264 and it was cool that he got to kill a deer with the same gun his grandad, dad, and uncle had all killed deer with. 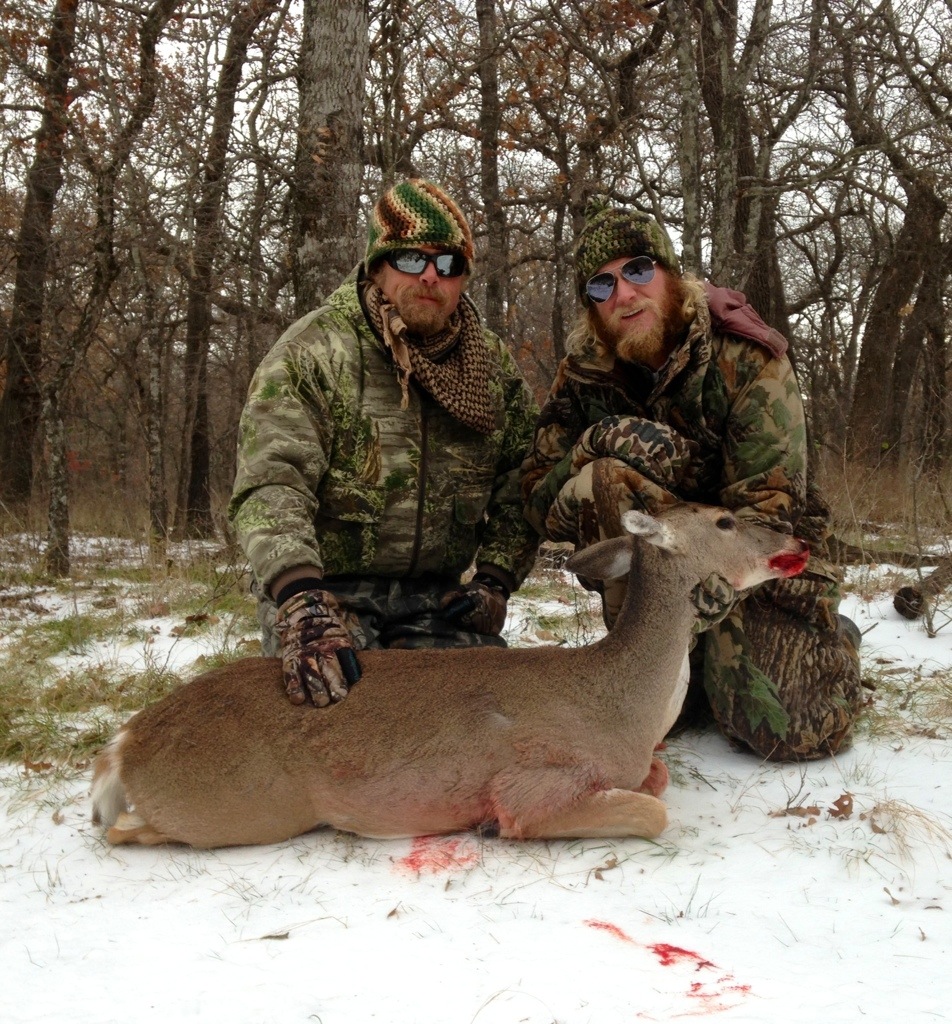 This deer would be taken to the processor so I field dressed her and told the boys I needed coffee and a biscuit and I knew just the place for both. I usually don’t go to the Village Kitchen in Jacksboro because its on the opposite side of town from camp and frankly, its expensive. I can get the same food closer and cheaper but Village Kitchen was the only thing open due to the ice I suppose, and expensive or not it was hot food and coffee so I’m in. We ordered enough food to cover the table with no room to spare and ate every last bite. Alex had grits and pancakes and eggs and sausage. Me and Ronnie went with an omelette a piece but big enough for two with about three kinds of meat, biscuits and gravy, hash browns and I can’t even remember what all, I just know it was good and there was plenty of it. 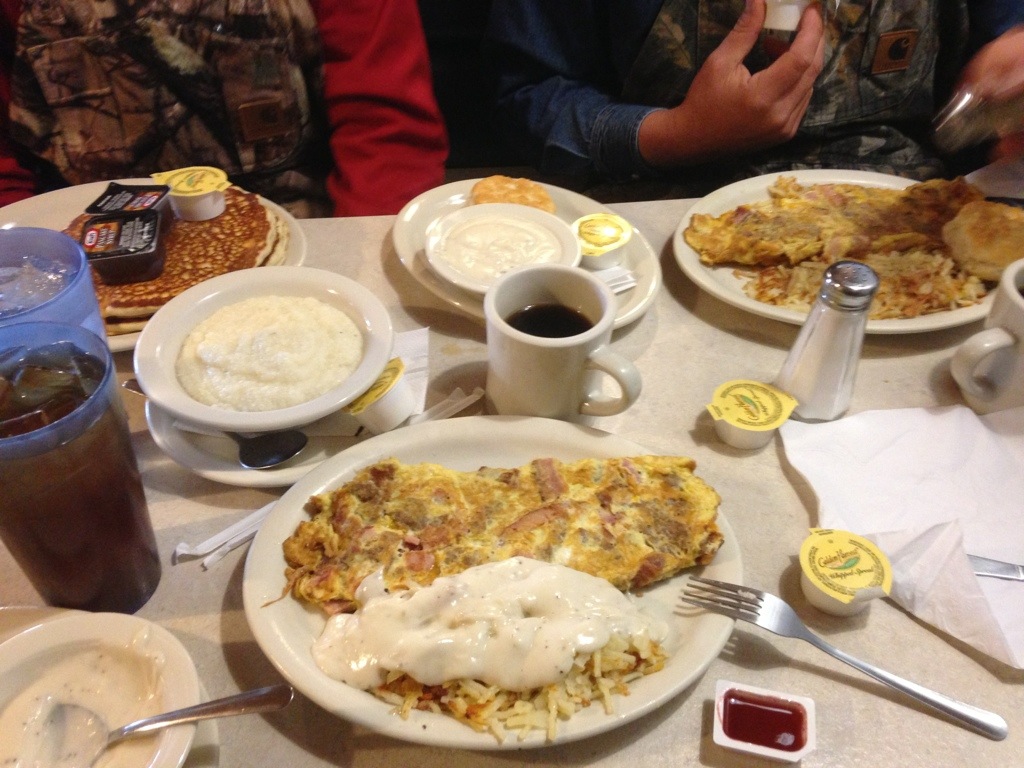 After the meal Ronnie had business elsewhere and Alex and I headed back to camp. The afternoon hunt was uneventful for me not having seen anything but a small fawn. Alex had both the bucks from his morning return but both bedded about 75 yards from his stand and not having taken a rifle all he could do was watch as the sun went down.
Sunday morning I stayed around cleaning camp and Alex went back to the same stand the bucks had been at but nothing was moving this morning so we packed up to make our return home on the ice road. 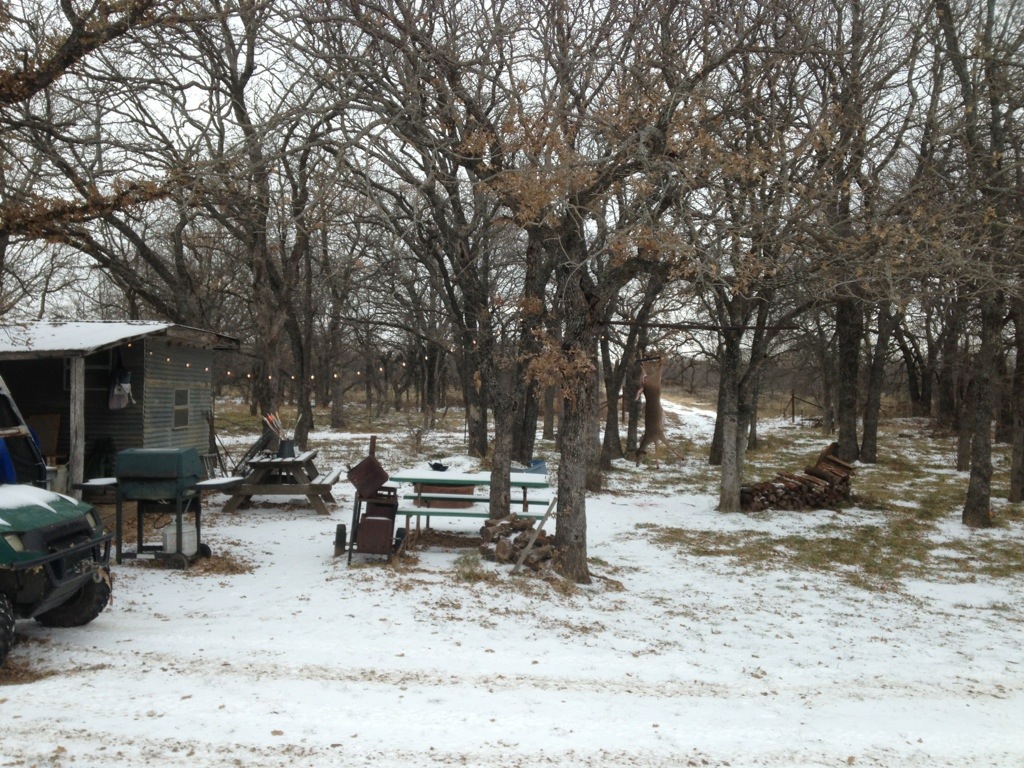 The roads were worse than when we came into camp and only a quarter mile from leaving the gate I was reminded how easy it is to be one of the idiots stuck in the ditch. Coming down a hill I had let off the gas and expected to be ok until I got to the bottom where some pavement was showing through where I could brake. This plan took a turn for the worse, actually a couple turns. I felt the rear end slide a little and I didn’t react hoping it was just in a rut but we spun out for the left ditch. I tried to steer out of it but seen that would not work and we were gonna end up in the ditch any way so I turned in to it hoping to hit the ditch straight on but before I could come around we were already facing completely 180 degrees from the way we started and I didn’t like this at all. I did what I could to get the wheels straight as we went back across the road backwards and just before we were at the ditch I told Alex hold on we are gonna flip on the side. He yelled something about a sign and then a big tree and then a fence, I wasn’t really listening I was bracing for the flip since it would be my side down and I figured everything in the cab would land on me. When the front tire caught the ditch it whipped the read end around even faster and I got ready but much to my surprise and relief we tipped up on two wheels and it seemed like we paused for a second and then we went back down on four wheels and everything in the bed of the truck went flying. You know the Jerry Jeff Walker song where he’s talking about leaning in the cab of the truck trying to get it to go a little bit farther? Well as dumb as it seems I was thinking that when I was leaning and waiting for the crash. All this happened at 25 mph in four wheel drive so yeah it was pretty slick. I think Alex just threw the underwear he had on away when we got home cause I doubt they were much good anymore. Every time after that it got even a little sketchy he would grab the door handle and look at me like I was trying to kill him. That was the only time I can remember he didn’t sleep all the way home from a hunt. Well we had the first mile out of the way and with only about 89 more to go what could go wrong?
You know how I said Texans can’t drive in ice and snow, part of that is because the roads are left basically untouched until it all melts. In Jack County somebody found a snow plow and decided to try to use it on 3″ of solid ice. He may as well been driving a Zamboni because all he did was smooth it out real good and put a nice shine on it. I’ve been to Dallas Stars games that the ice wasn’t this smooth and you can imagine the results of this. There were cars sliding in ditches on both sides of the road and I was one of em. This time wasn’t as dramatic as the first and I figured if I’m gonna end up here anyway Id just drive in it so we went the next half hour in the grass.
After an hour and a half of driving I needed food so we stopped in one of my favorite cafes in Springtown and I knocked out a plate of roast beef and Alex had a breakfast for two. This got us home but it was a long two hours for a total of three and half. I think next time I’ll just wait out the storm in the woods, if the school wants Alex there that bad they can come get him.