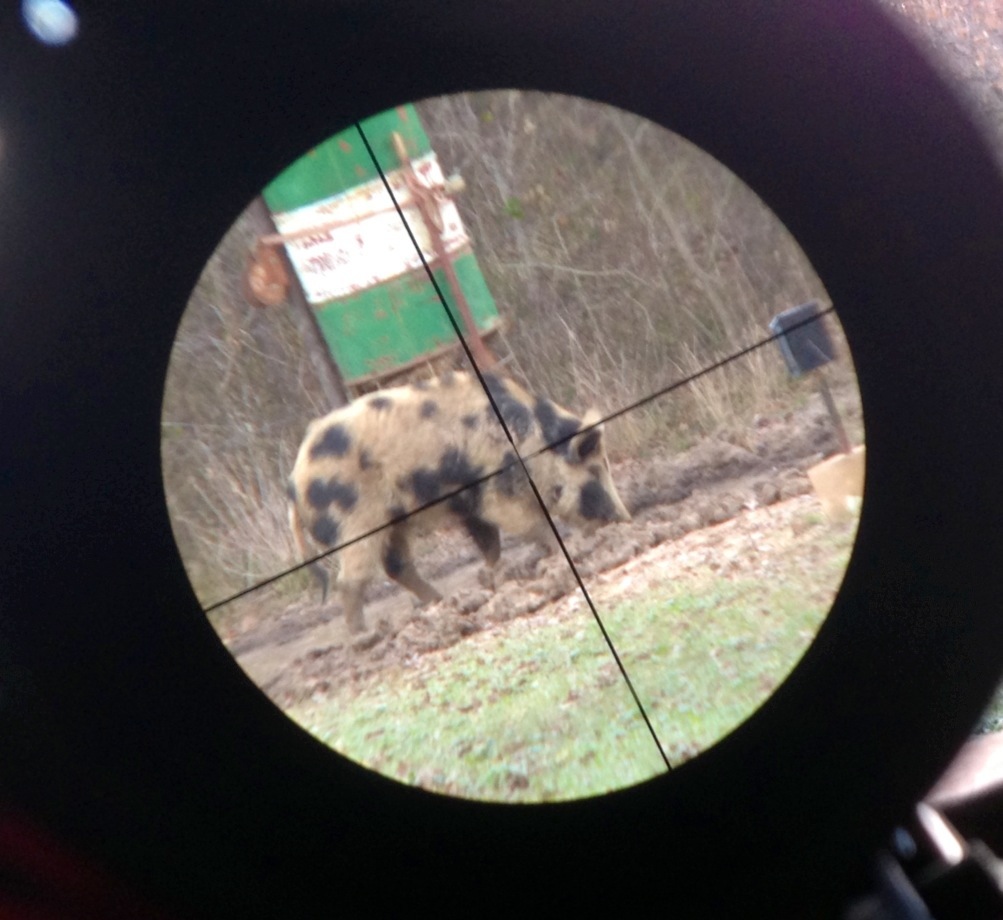 No sooner had he left a little eight point fed into the field and was making a hand on the oats and clover not twenty yards from me when something caught his attention. He threw his head up and laid his ears back while bristling up all his hair and went into a fighting posture. I was thinking this guy has either found a spike to fight or he don’t know how little he is because he’s about to get beat up. I glanced in the direction he was walking and a six point was on the other side of the food plot gate and he looked like he wanted to fight too. Now all this is happening fifty yards away so I’m pretty excited to get to see what I think will be a little sparring and maybe some pushing, boy was I wrong. These two met at the gate, which is just a goat wire gate with a pole on one end, and hit their racks together a little and then as if someone rang a bell to start the fight all hell broke loose. The six point came through the fence with enough force to knock the eight onto his back and when the eight stood up he was tangled in the fence. The six went at him and also caught the gate and the whole outfit came loose. The post was broken and the gate was tangled around two deer and a briar patch. I had no intentions of shooting either of these deer but I honestly thought that one if not both would be so tangled that they would die trying to get out. I watched as the six came loose and the eight ended up on his back from being sent into a flip like a dog that hit the end of his chain. Once on his back he had big trouble for the six point went at him hard and gored him up a little but had not the six done this I don’t think the eight would have tried so hard to get away and freed himself. Both deer finally come lose but not before taking out my gate and 20′ of fence. I was glad to see that I would not have to fight a whitetail buck or kill one. The eight was bleeding out his mouth and was roughed up a little, the six had some cuts on his legs but both deer will live to fight another day. Hopefully not through my fence.

Little eight just before he started a fight he couldn’t finish. 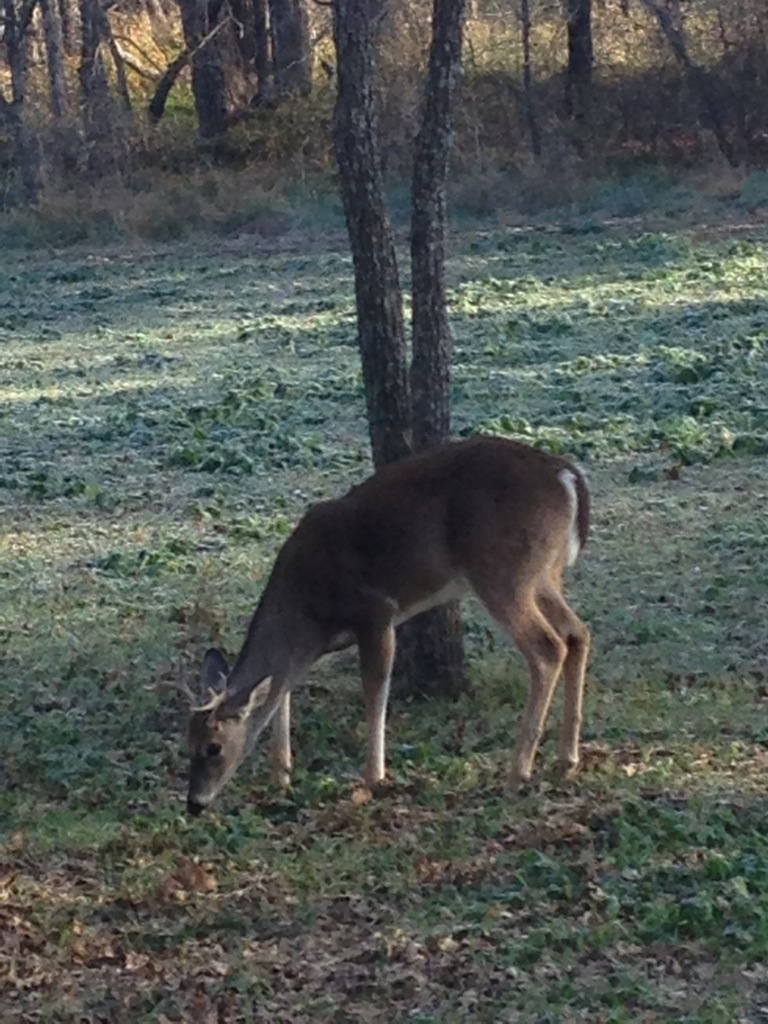 I’m usually not bored when I’m alone in camp but I sure wouldn’t be today because now I had fence and a gate to build. I worked around on feeders and gathered wire and post for the fence and before I knew it it was time to go sit in the blind again.
I got in early and had a welcoming party waiting on me when I got there, only they weren’t very welcoming. Seems a half dozen squirrels thought it rude of me to scare them off their corn, they obviously had forgotten who put it there to start with. I listened to them chatter on alerting the whole county to my presence before I had had enough and tried my best to take one out of the tree. As is usually the case when I shoot at squirrels I was down one arrow and had no squirrel to show for it but I got close enough with my shot to send them to their holes.
An hour later I catch movement and guess who, Big Spot, he is really testing my will power at this point but I had plans for him and they didn’t involve me shooting him so once again I watched as he gobbled up corn at 20 yards, luckiest pig in Jack county. Darkness came with only few deer in the distance and a coon that was enjoying the free meal so I headed to camp for Thanksgiving supper.
Let me say here right off the bat I’m glad my grandma ain’t Marie Callender cause that was the worst Thanksgiving dinner ever. Seems in my haste to exit the chaos some call Walmart I grabbed a chicken dinner instead of a turkey so for the first time in my life I didn’t have turkey on Thanksgiving but after eating what they expected to pass as chicken I’m not sure it would have mattered much anyway. I polished it off while listening to the Dallas Cowboys on the radio and had a honey bun for desert. It wasn’t the same as grandmas turkey dressing and chocolate pie and watching the Cowboys but it was hot and I was cold so I called it Thanksgiving dinner and was glad to have it, after all turkey wasn’t even eaten at the first Thanksgiving but I highly doubt anything that resembled what Marie made me was either. 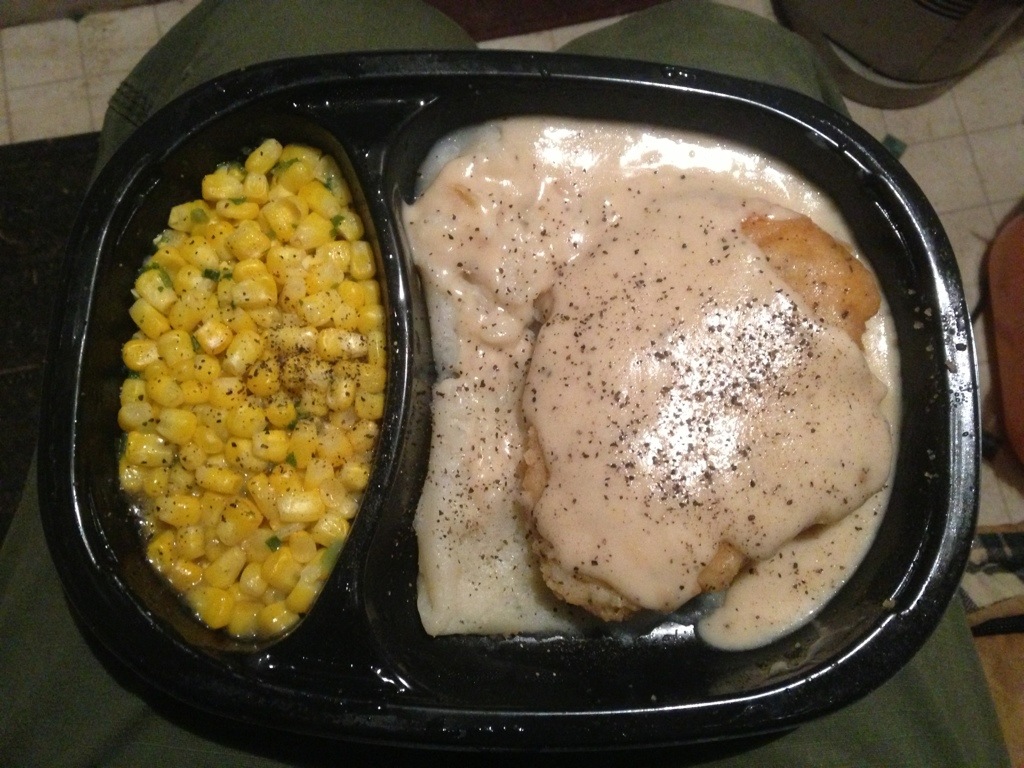