I laid awake most of the night with throbbing ribs thinking about the whole trip. 8 days is a long time when you’ve put in the miles and effort we had and we only had one deer to show for it. I thought about being here and how this is my in laws I don’t see often, some of the family sees them even less and I had spent the most part of a week worried about big deer. Bo had taken time off work and I was a guest in their home yet I hadn’t really visited much with Deb and the kids at all. I wasn’t going to let a deer make me miss seeing family I rarely see or put anymore pressure on Bo, he was feeling down about not getting a buck and the money for tags and gas, I don’t worry about that really but to him and Deb they felt it wasn’t worth the trip if I didn’t kill a buck. They see this land everyday and maybe to them it wasn’t worth it but to me seeing big horn sheep and the views I had seen I was fine.
We would drive out to the land of Bo’s Aunt again where we had started this whole deal looking for the tall racked buck. Bo didn’t know it but I had decided that any deer that would fill my tag and put everybody at ease would be a good deer today.
First stop a long clump of brush that we had spooked two mule deer doe out of earlier in the week. I didn’t want to walk to it and scare the deer out but I didn’t know what else to do and it seemed like what everybody here did so I went to it. I had almost made the length of the draw when a nice white tail buck jumped out and headed up the hill. I did my best to hold steady as he went straight up but when I pulled the trigger I seen the dust fly just right of the deers neck. I don’t like shooting at deer like this and hate to miss more than anything and I don’t think I will ever hunt like this again, if I can’t wait one out and get a shot at him with a good rest then I just won’t hunt them. I can’t take this missing stuff and I’m not practiced at moving targets at any distance so I doubt I was gonna hit one anyway.
Second stop was the draw where the tall racked buck was a couple weeks ago and four doe shot over the ridge before we even got close, I think the wind had them spooked. The wind was 30 mph and it was as cold as I had been since I got to Montana. We drove for another hour and finally found three muleys on a hill side at the end of a very long draw. We had seen deer in here a few days before and I didn’t like the way we approached them so I told Bo I wanna do it this way and he said he would fallow and try to get a range for me when the time came. It was 1.2 miles to the deer and it took an hour and ten minutes to get there across wheat fields and through a swampy bottom but finally we were to the last ridge. I crested the last ridge on my stomach, belly crawling through the tall grass a white tail doe jumped out of the brush and honestly I thought the whole stalk was blown. Luckily the mule deer hadn’t seen the white tail right away and stayed put. I got far enough up to see mule deer below me and I looked for a clear shot. There were three small bucks in the group but nothing I would like to put on the wall so if its meat we are taking I’ll take the fattest doe. Bo said he couldn’t get a range on the deer but the nearest hill was 113 yards. I glanced up to the top of the ridge and it couldn’t be more than another 100 yards so if they did head out it would still be an easy shot. All at once one mule deer after another in a single file line started up the opposite hillside, a total of 12 were in line and I’m thinking I surely didn’t just let these deer get away. One by one walking away they went over the crest and one doe stopped almost to the top like she was suppose to be just for me, she turned mostly broadside at around 200 yards and I squeezed the trigger. I could hear the bullet hit and knew that 8 days of hunting, walking, stalking, and hurting were over.
She made it just over the top of the hill and died. I walked up on her and was happy, happy the tag was filled, happy for having a deer, happy that I could go visit family and eat and relax. 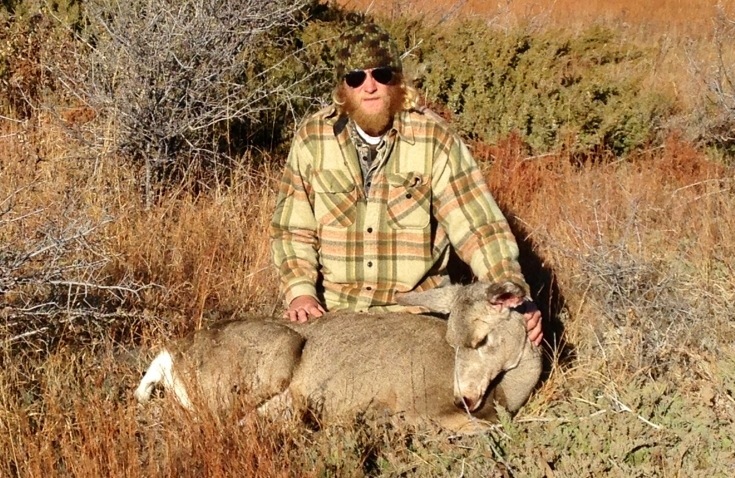 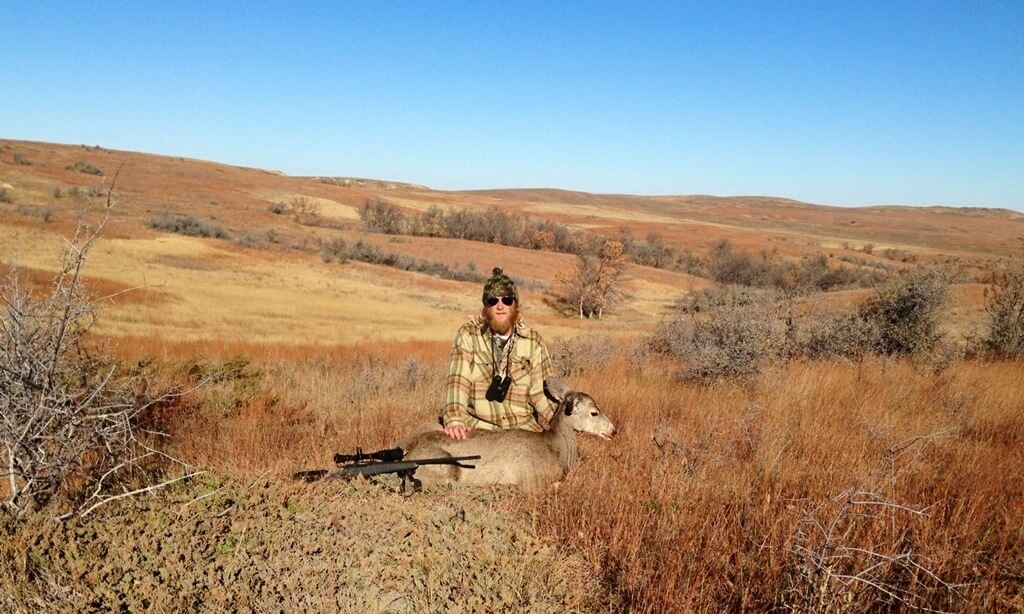 On the way home we had to stop at Aunt Janettes, she is the land owner and she always has good coffee for anyone that stopped. We talked about the neighbors and the coyotes and how the oil filed guys were messing up the roads and she brought us some apple crinkle and ice cream. Ive never heard of apple crinkle but she told me how to make it and it was great with coffee and ice cream. 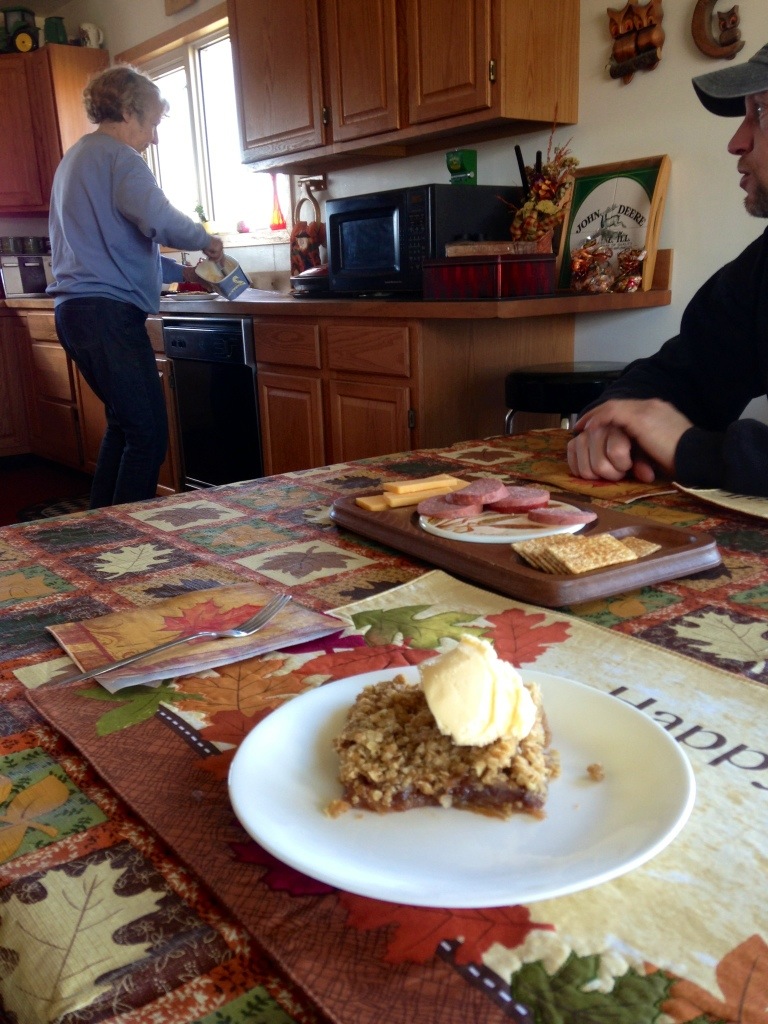 I thanked her for letting me hunt on her place and we left for town.
Supper plans were made with the whole family so I quartered the deer and did my best to not look and smell like a mountain man and we were off to The Powder Keg in Fairview. It was pizza for us and I don’t know the genius who thought of this but they had biscuits and gravy pizza and cheeseburger pizza. The biscuits and gravy is likely the best pizza I ever ate. The pickles on the cheeseburger pizza threw me for a loop at first but it worked. It was good to have supper with everybody and I finally was full of good food. 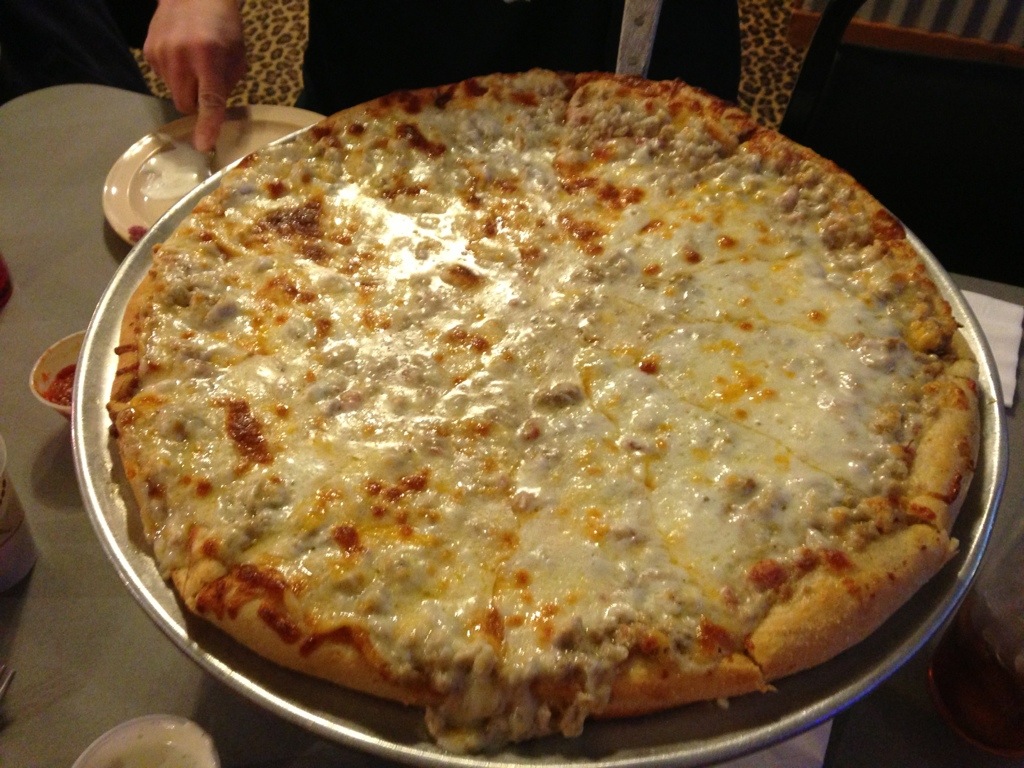 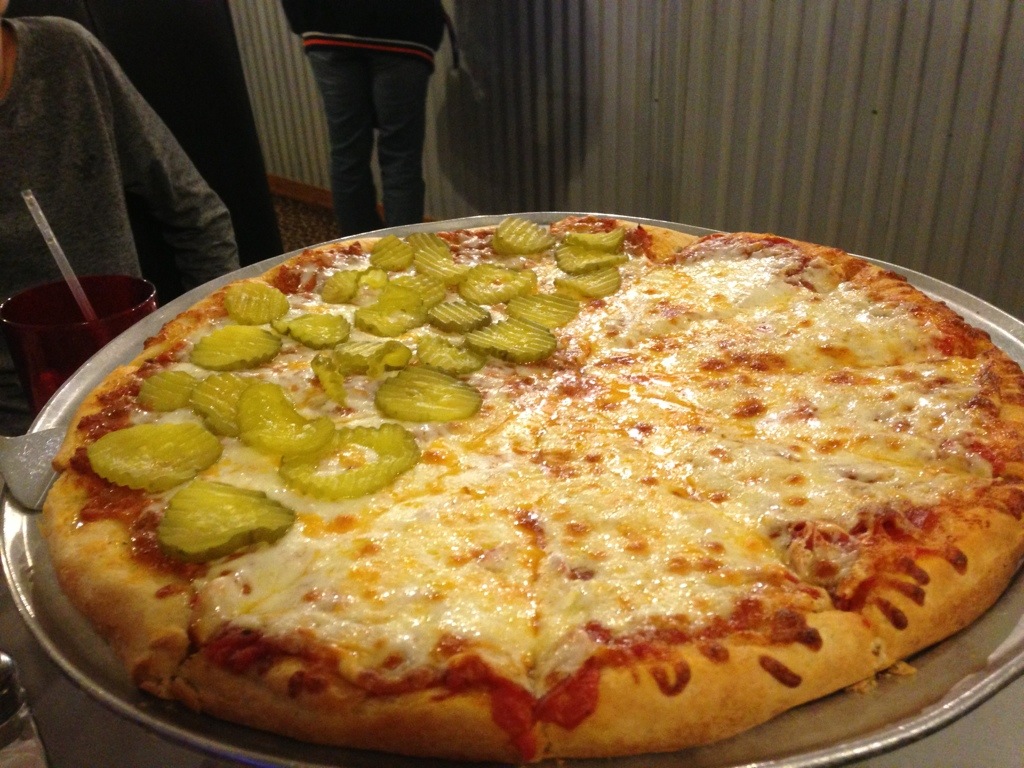 We had no plans for the morning and it was probably best to just let everyone sleep in and relax. I didn’t sleep in but it was nice to relax, tomorrow we would take the boys to shoot a little and maybe try to find a pheasant. 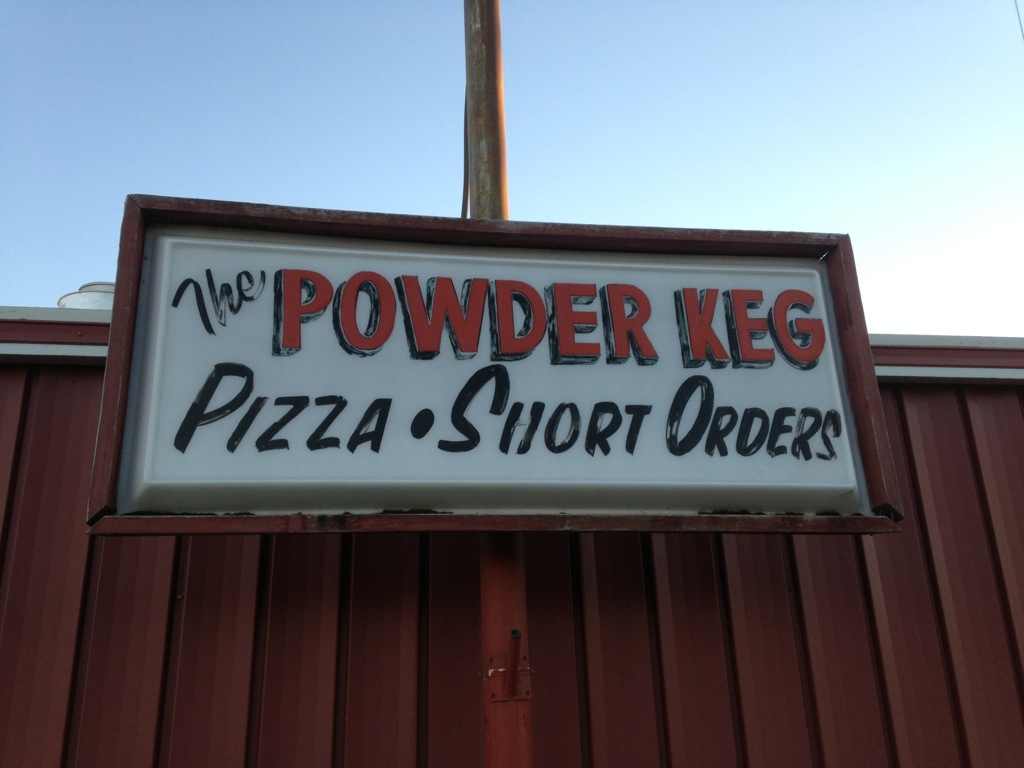