After we loaded Cody’s antelope we checked in with Nate and Hoss and they weren’t far away so they met us at the gate and we went through the congratulations and story telling again. We headed back to the house to get the antelope clean and they decided to look for a nice buck for Hoss. Cory and I were doing a fine job of quartering the animal when we heard a shot in the distance and knew Hoss had connected. A report from Nate confirmed that Hoss had in fact made a nice shot at 330 yards on one of two bucks in a herd of a dozen or so animals, after some discussion on which animal they thought was best Hoss decided on a nice heavy buck. When I learned that there was another buck there I did what I thought was some pretty fancy knife work, but Nate is the taxidermist and he may not agree, either way I made short work of what was left and we were on our way to try to find the other buck for Cory. When we were in route to the area the herd had crossed into the neighbors pasture where we weren’t allowed to go. All five of us stood waiting at the fence glassing the herd waiting on their next move but it seemed the buck knew he was safe where he was and just thumbed his nose at us. I thought maybe we should back off and watch from a distance and this may help to get them moving so we made our way across the road to a windmill that we could crawl up and watch the herd from 1000 yards or so. 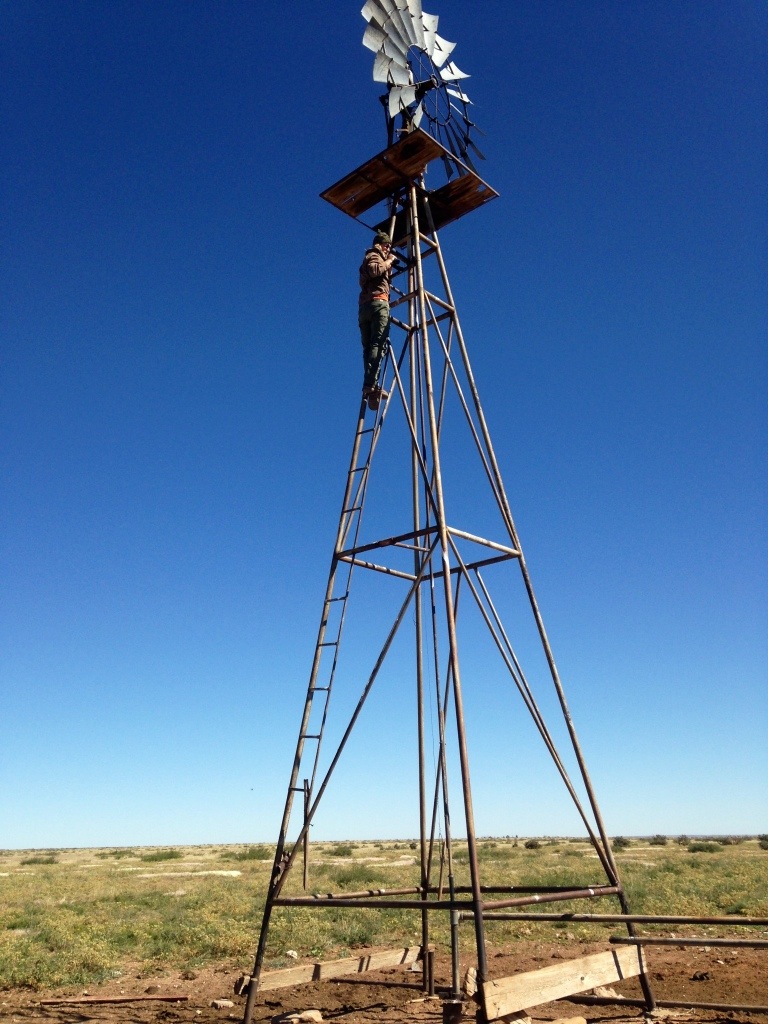 This didn’t seem to phase them either and we started on a new plan. I got word from Nate that another herd was just behind the house so back we went from where we came and the hunt was back on. Nate seemed excited about the buck in the herd but when we arrived on the scene all we saw was a dust cloud left from a stampede of does and no buck to be found. How could he have gotten passed all five of us in this barren ground? Well he hadn’t, he was just late to the party and as he came into the open from behind a cholla cactus 100 yards or so behind the girls it didn’t take Cory long to see that this buck was a shooter. Paying us no mind as he followed along behind the herd he was making his way toward us in a route that would put him in our lap. Cory said he was ready and I stopped the buck at around 100 yards and Cory made a nice shot. We gathered around the last buck of the trip and congratulations and pics were again in order as everybody told their version of how it happened. Its interesting to me how one event can be told in so many ways. 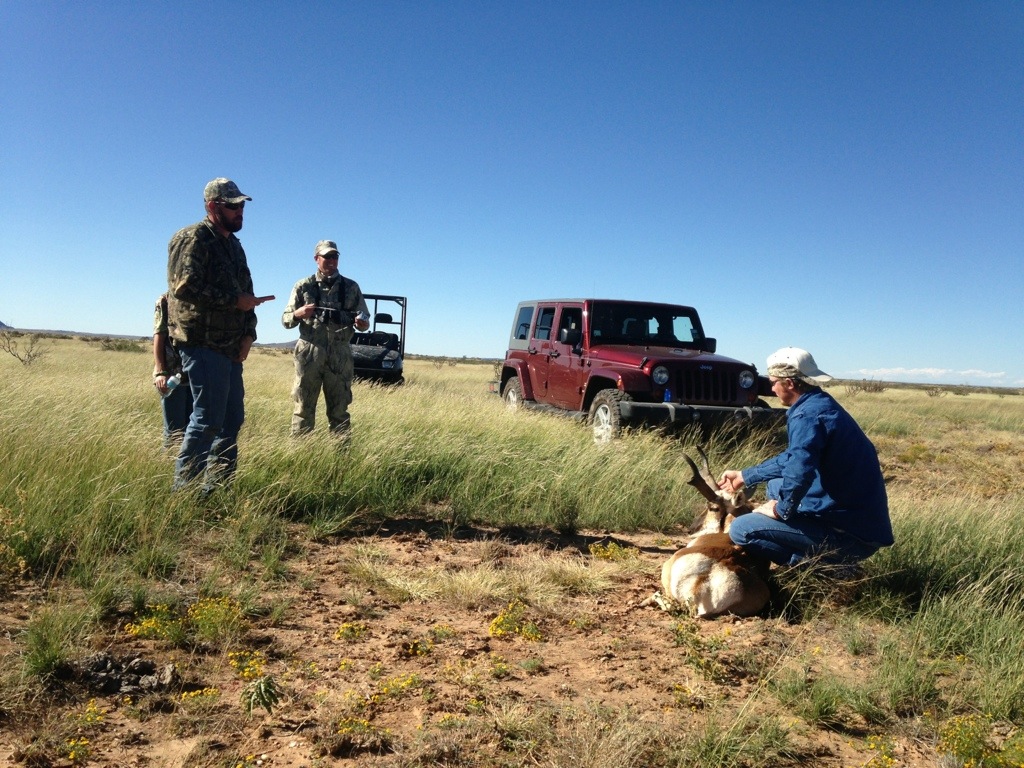 We had filled all three tags on the first day of the hunt and all three were nice animals. 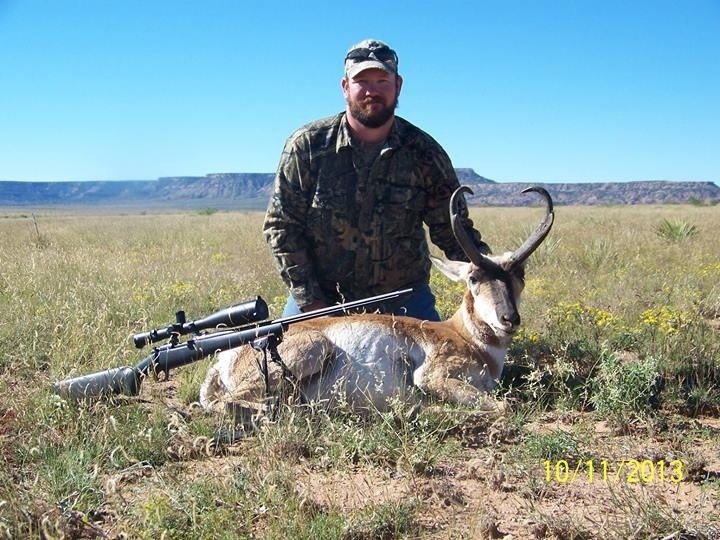 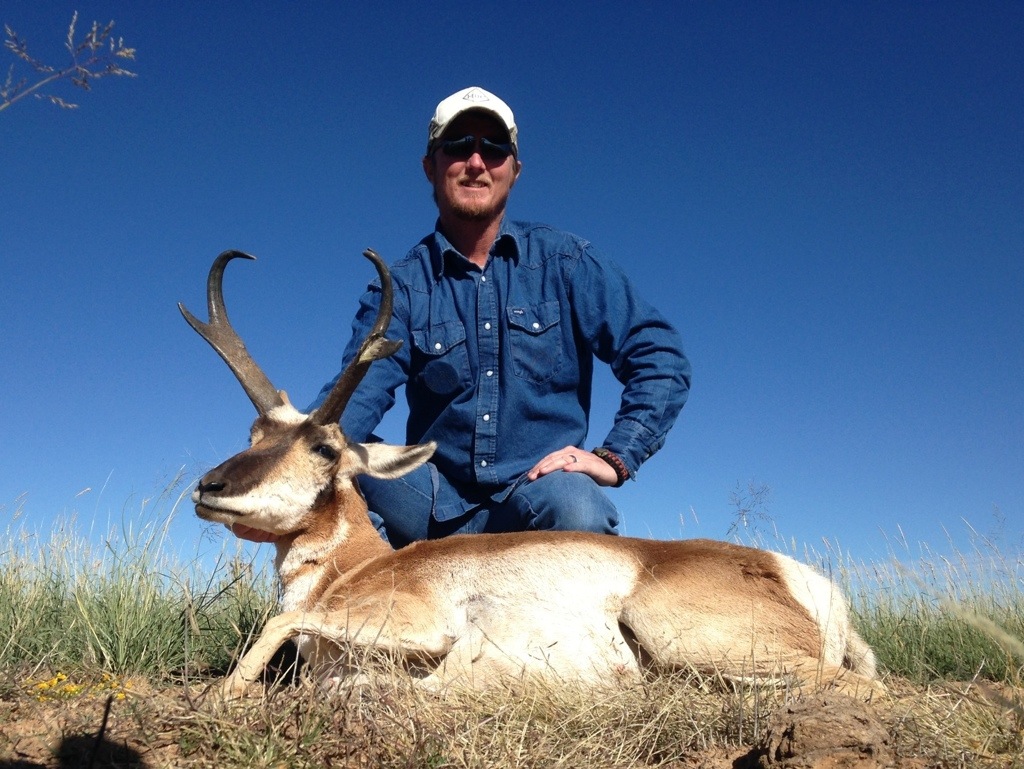 Now it was coyote time, well it was try to kill a coyote time. Why can’t they be more like antelope, white, easy to spot and just stand around where I can see them?